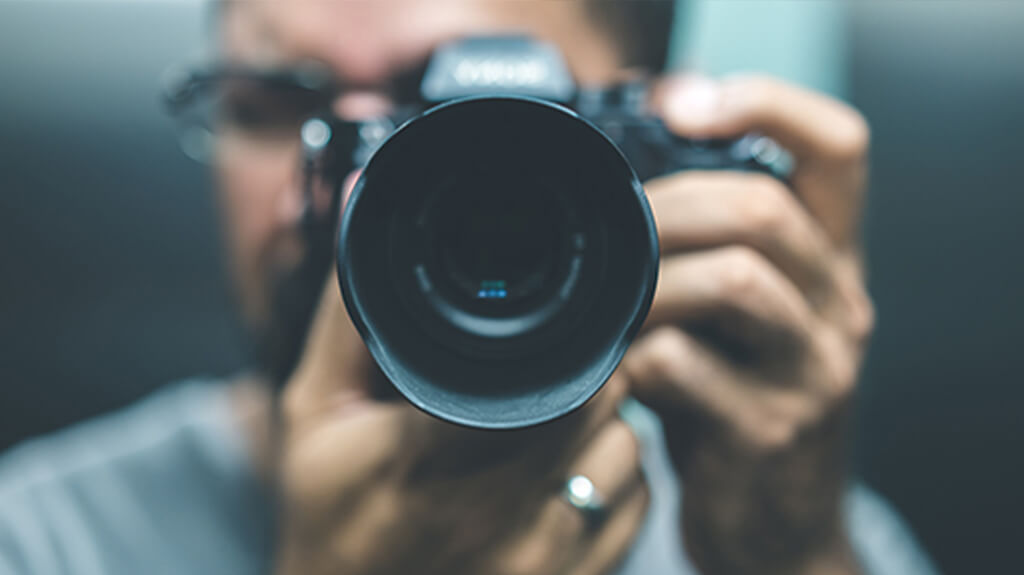 A series of striking photographs that reflect the beauty, power, and whimsy of the vertical lift community have been selected as winners of HAI’s eighth-annual ROTOR Magazine Photo Contest.

In addition to being featured in this issue, the grand-prize winner and four category winners were displayed at HAI HELI-EXPO 2020 in Anaheim, California, in January 2020. The winners also received a cash prize ($500 for the grand prize and $100 to each category winner).

Thank you to the hundreds of photographers from around the world who entered the contest.
Special recognition goes to this year’s Honorable Mention, Bernhard Stachelberger of Vienna,
Austria, whose photo graces the front cover of this issue’s print edition.

Reviewing the photos submitted for the contest is one of the more fun “tasks” that we do
here at the magazine. The only thing better than looking at these aircraft would be to take one
for a ride.

The ROTOR Photo Contest will reopen on Aug. 1, 2020; start taking your winning shots
now, and submit at contest.rotor.org! 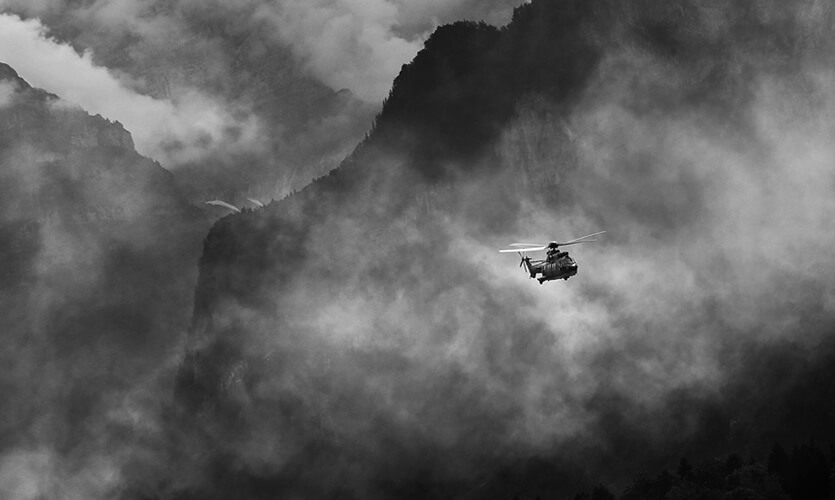 This superbly composed shot took this year’s Grand Prize as the top photo submitted in the 2020 ROTOR Magazine Photo Contest. The moody atmospherics and soft curves of nature contrast beautifully with the Eurocopter AS332 Super Puma, highlighted as it emerges from the white mist near the former Mollis Air Base in Switzerland.

One of the judges, also a professional aviation photographer, gave Fabio Piacenza the best compliment one photographer can give another, saying, “I wish I had taken that photo.” 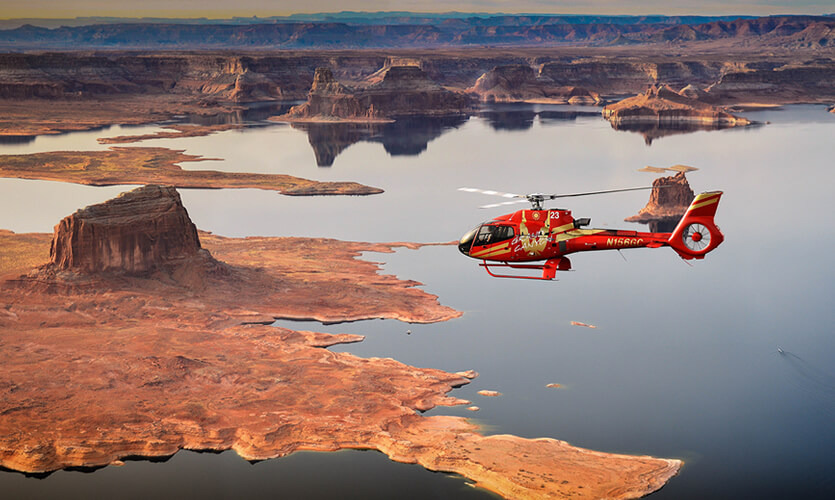 This photo of a Papillon Helicopters Eurocopter EC130 flying over Lake Powell, in Page, Arizona, won the Helicopters/Drones at Work category, which is reserved for photos of aircraft in action. The judges chose this image, taken by Desiree Webb, for its sheer beauty, showing off both the landscape and the aircraft to their best advantage. 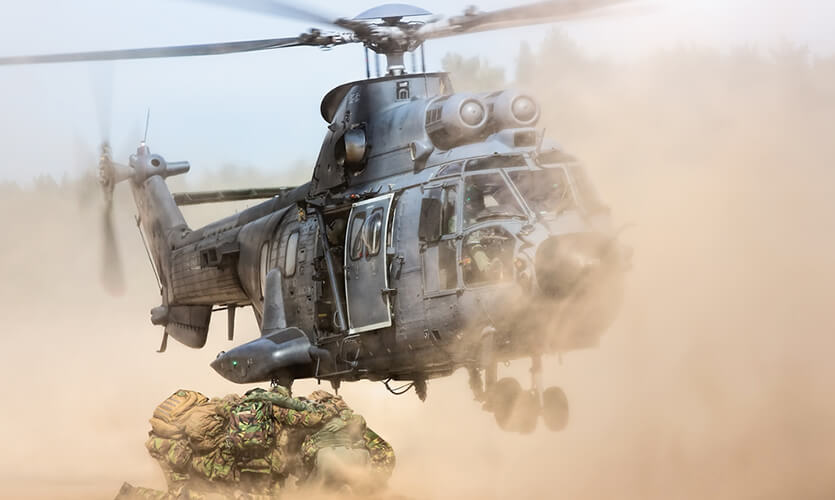 Helicopters/Drones in the Military

Ron Kellenaers shot this photo of a Royal Netherlands Air Force Eurocopter AS532 Cougar, which won the Helicopters/Drones in the Military category, as it picked up troop members at a training area in the Netherlands.

Like the best photos, Kellenaers’s image conveys a wonderful immediacy that puts the viewer right there. You can almost feel the grit in your eyes, blown up by the rotor downwash. 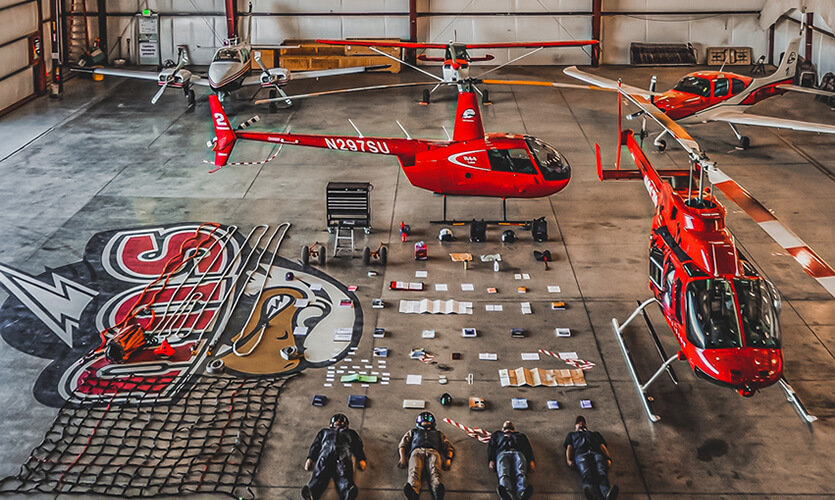 People and Their Helicopters/Drones

This photo, which won the People and Their Helicopters/Drones category, was taken at the hangar of Southern Utah University’s (SUU) College of Aerospace Sciences and Technology.

James DeBry and his colleagues at SUU worked to create this playful image as part of the Tetris Challenge. That meme, which began with law enforcement and military groups, shows personnel, supplies, and equipment unpacked and arranged in a grid pattern. The photo also depicts, as DeBry notes, “just about everything a person needs to become a helicopter pilot.” 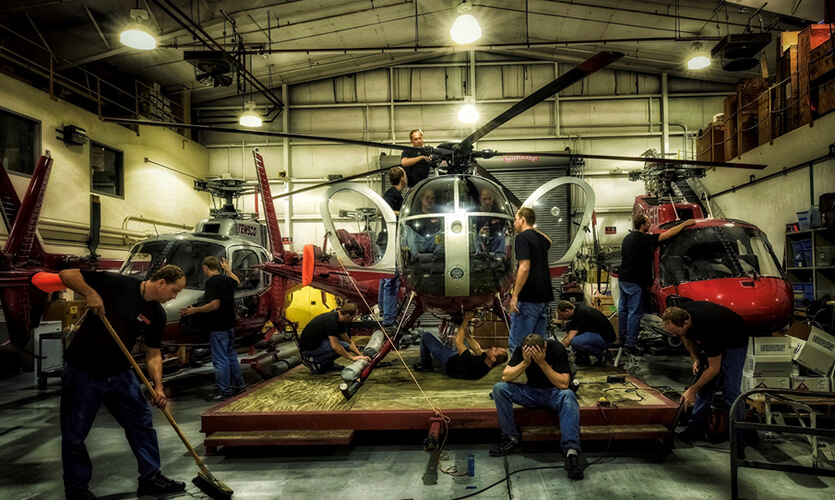 For his winning entry in the Helicopter/Drone Digitally Enhanced Photos category, Jacob Straube, who runs Straube’s Aircraft Service’s Hawaii location, took a series of 13 images in the Temsco Helicopters maintenance hangar in Juneau, Alaska, and then combined them.

The judges appreciated his photoediting skills as well as the story Straube tells about a day in the life of an A&P. Straube is a Photo Contest repeat winner, having also won the Digitally Enhanced category in 2018.