By Jeff SmithJanuary 25, 2023No Comments

Six months into my term as chair, HAI is moving forward!

Since I became chair of HAI on Jul. 1, 2022, it’s been a very busy time for the vertical aviation community, and HAI has been there, stride for stride. With a staff of just over 30, we were able to present at more than two dozen vertical aviation events around the world since the beginning of July, delivering HAI’s vision of an economically vibrant, diverse, and sustainable global vertical aviation industry. 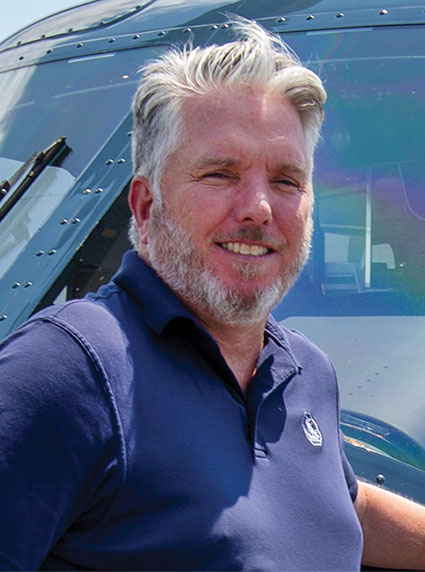 In November, the HAI Board of Directors and some staff members went to Cologne, Germany, to assist the European Helicopter Association and the European Union Aviation Safety Agency in holding EUROPEAN ROTORS 2022. In just its second year, this regional trade show had more than 4,000 in attendance to see 15 helicopters and several eVTOL mock-ups on the show floor and take in hours of trainings, panel discussions, and briefings.

Later in November, James and I accompanied HAI staff to Boise, Idaho, to host the HAI Aerial Work Safety Conference. This was the first year for the expanded conference, which previously focused on aerial firefighting and now includes the heavy-lift and construction sectors. James and I toured the US National Interagency Fire Center, which coordinates wildland firefighting policies and activities for eight federal and state government agencies. Their emphasis on sharing supplies, equipment, and personnel to achieve efficient and cost-effective operations is an example to be imitated.

This year wasn’t without its challenges. Members across the globe see workforce development and the high cost of aviation insurance as serious challenges to their ability to do business. As a result, the HAI Board of Directors has established working groups to coordinate an industry response to both issues. I was happy to see dozens of HAI members apply for seats on each of these groups, and I wasn’t surprised: people who are attracted to our industry want to steer their own ship and be directly involved in creating their future.

Access to airspace remains a concern. Several pieces of legislation introduced and reintroduced at the federal, state, and local levels have been attempts to reverse the doctrine of federal preemption. This long-standing provision of the US Constitution holds that some activities, such as defense, diplomacy, and aviation, are reserved for the federal government. One example is New York’s “Stop the Chop” bill, which would have allowed anyone involved in helicopter operations—including operators, FBOs, manufacturers, state agencies, and line personnel—to be sued for helicopter noise pollution, even if the activities complied with all federal laws and regulations. The HAI Government Affairs team of Cade Clark, John Shea, and newcomer Katia Veraza has done an amazing job of playing whac-a-mole and presenting all the reasons why proposals like these should not become law.

Finally, the Board of Directors has completed an extensive review of our association’s strategic plan. The resulting plan for executing on HAI’s mission contains five initiatives that the HAI board and staff have already started working on. The board also voted to begin a rebranding of the organization, to keep us aligned with the changes in our dynamic industry.

I’m only 6 months into my 1-year term as HAI chair, and I’m very happy with our course and speed. From my colleagues on the board to the HAI staff and the incredible members who volunteer their time to improve the industry, I am proud to work with such an amazing team.

Jeff Smith is the chief pilot for R.O.P. Aviation in Teterboro, New Jersey, and the 2022–23 chair of the HAI Board of Directors. A former US Army aviator, he is a dual-rated pilot with more than 11,500 flight hours. Jeff is an active industry volunteer and advocate who has worked on noise, safety, and airspace issues in the New York City area as a member of the Eastern Region Helicopter Council.