ROTOR Magazine2020 Q3Advocating for You

As the HAI government affairs team, John Shea and I represent your ­interests to your elected representatives, advocating for a legal and regulatory environ­ment that will enhance the growth and stability of our industry. I find the inner workings of congressional committees or the tortuous path of a bill through the system to be fascinating. However, I’m often told that I’m using that word incorrectly; I probably meant “frustrating” or “incomprehensible” or “dysfunctional.” 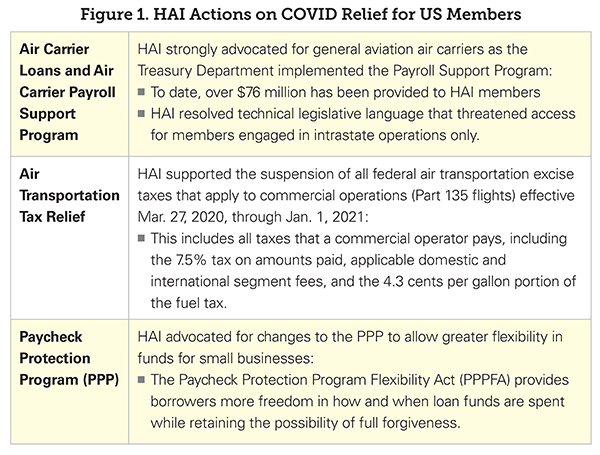 However, with a global economy and political systems reacting to a pandemic and less than 90 days until a US national election, it’s only natural if your interest in politics is heightened (maybe not to the level of “fascinating”) in recognition of these legislators’ very real ability to enact laws that affect us. For some recent examples of how the US government COVID relief programs have benefited the vertical flight industry, please see Figure 1 or visit the Legislative Action Center.

As of this writing, Congress is in the middle of intense negotiations over what the next COVID relief package will look like (see the “Legislative Spotlight” section, below). However, as important as that is, there’s some other vital work Congress must address in a very short time frame. One must-do is averting a government shutdown.

Congressional spending is authorized through the end of September. The House has finished its work on the majority of the 12 FY 2020–21 appropriations bills (Homeland Security and legislative branch appropriations have made it out of committee but haven’t yet received a House vote). Due to partisan disagreement, however, those bills aren’t expected to reach the president’s desk.

In the Senate, the appropriations process has stalled because of disagreements over proposed amendments to the bills. As a result, it’s increasingly likely that Congress will need to pass a continuing resolution to keep the government funded past Sep. 30, 2020. With the recent deliberations on the next COVID relief package stalled, Congress very well could be coming back from August recess with just weeks to deal with funding the government and the relief package, making for a very complicated September.

While the COVID relief and appropriations bills inch forward, politicians are also deep into reelection activity. In the Senate, 35 seats are up for election: 12 Democrat and 23 Repub­lican. However, if Democrats net just 4 of those 23 Republican seats without losing any of their own, they’ll take control of the Senate.

Over in the House, election politics are making for some interesting races. Several incumbents face high-profile primaries, with some already out of a job. The GOP released a list of more than 50 targeted seats, including 30 districts that President Donald Trump won in 2016. Democrats aim to protect their freshmen, listing 42 competitive seats they intend to aggressively defend. Most of these freshmen seats are in suburban areas that have experienced rapid, diverse population growth in recent years. Democrats are also recruiting top-tier candidates to take on Republican incumbents.

The census provides a fascinating angle of political intrigue. Based on the recent analysis of the census count, 17 states may see a change in their number of congressional seats. It’s likely Texas, Florida, and North Carolina will gain seats while Michigan, Ohio, and Pennsylvania will lose a seat. This situation will come into play in the 2022 midterm congressional elections.

If this process isn’t fascinating, I don’t know what is. Congress is in the middle of deciding important policies that will impact our industry. HAI continues to advocate on your behalf to keep the rotors turning.

Unlike the CARES Act, which passed unanimously in both the House and Senate, the current COVID-19 relief proposals have become highly politicized. Despite  some similarities, the HEROES Act passed by House Democrats and the HEALS Act sponsored by Senate Repub­licans have significantly different priorities and price tags.

Further complicating matters, Senate Republicans themselves are divided over the HEALS Act. Key fiscal hawks have announced their opposition to many central elements in HEALS as well as the $1 trillion-­plus price tag. Conversely, their colleagues from swing states who are up for reelection in 2020 are motivated to support growing the HEALS package to at least $1.5 trillion or more.

Airport Funding. HEROES includes tens of billions of dollars to support every portion of the transportation sector, including $10 billion for the continued operation of our nation’s airports. HEALS provides $10 billion only to airports. HAI supports the airport grants and is advocating for clear direction to be provided on rent abatement for tenants as they attempt to recover from the impact of the pandemic.

Air Carrier Payroll Support Program. Notably absent from both bills is an extension of the air carrier Payroll Support Program (PSP), which many HAI members qualify for and have received grants from. The day the HEALS bill was introduced, 223 House members signed a letter of support for the PSP. The following week, 16 Republican senators also sent a letter of support for extending the program. HAI, along with many other aviation associations, continues to advocate for inclusion of a PSP extension in the final package.

Paycheck Protection Program. Both HEROES and HEALS extend authorization for the PPP through Dec. 31, 2020, while providing additional funding and expanding eligibility. HEALS includes a proposal to allow for a second loan for small companies that have suffered major financial losses and expands approved uses of funds for loan forgiveness.

Negotiations over the next relief package will continue as pressure mounts from the unrelenting economic effects of the pandemic. Congress, currently in August recess, has 13 legislative days scheduled before the November elections to pass funding legislation and a relief package. However, lawmakers could be called to return to Washington with 48 hours’ notice if a deal is reached before they’re scheduled to be back in session.

While the halls of Congress may be empty, the HAI government affairs team remains in constant contact with lawmakers and their staffs. We’ll continue to advocate on our members’ behalf for policies that strengthen the vertical flight industry and the workforce that supports it.