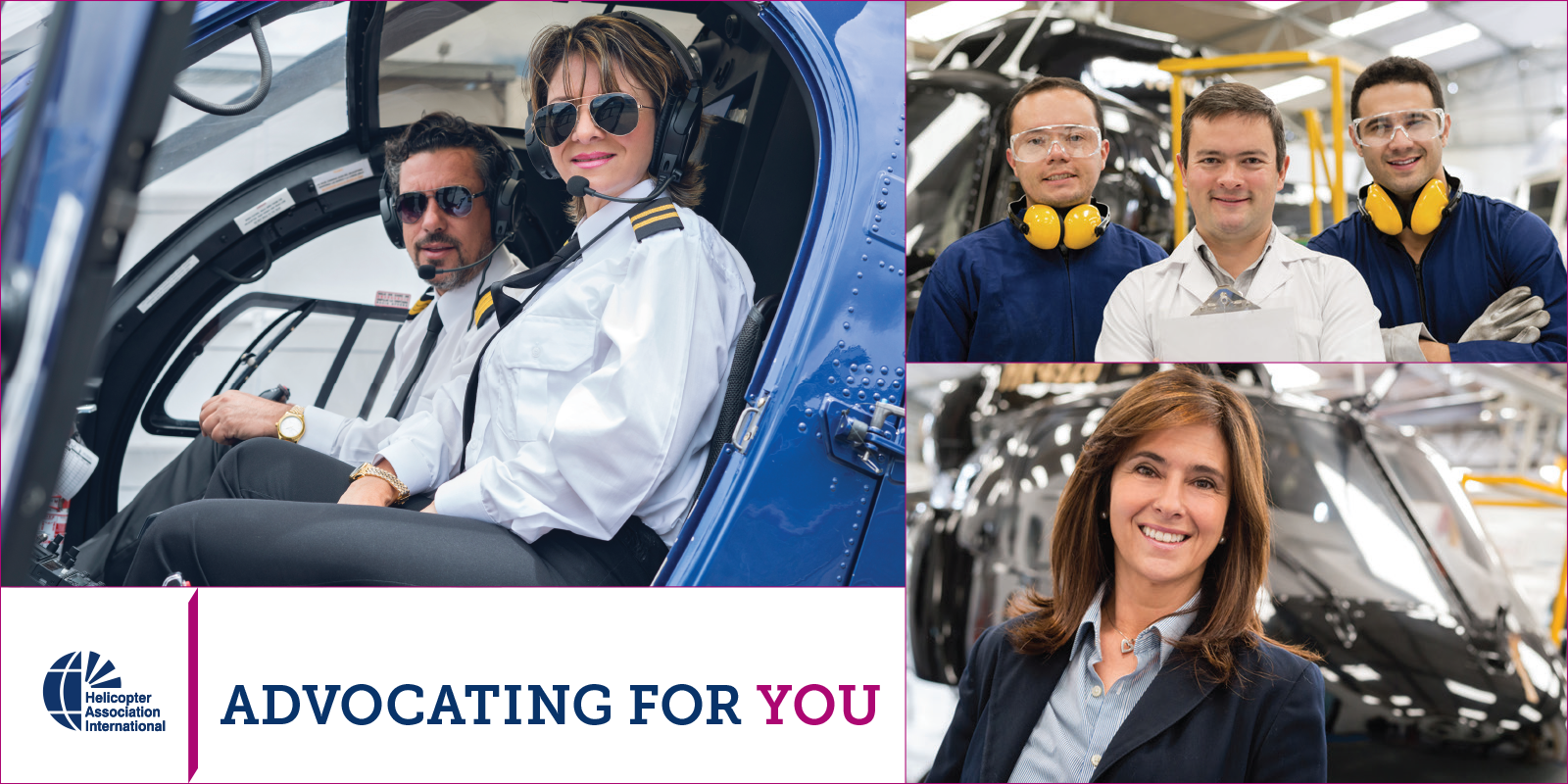 A review of what HAI’s Government Affairs team has been watching for members this week, including the reopening of the New York voluntary agreements, the FAA’s proposed changes supporting AAM, the latest on the aviation industry workforce shortage, and more.

As we wrote to you last month when the original comment period opened, the National Park Service (NPS) and the FAA are rewriting the rules and regulations for air tours over national parks. It’s clear from plans already introduced that the NPS aims to cut back flights to such a degree that it will no longer be economically feasible for air tour companies to stay in business. However, the agencies have come together in a commonsense approach by creating voluntary agreements for the Statue of Liberty National Monument and Governors Island National Monument.

If you have not done so already, you can submit an HAI-endorsed prewritten comment directly to the NPS in three simple steps:

HAI has provided an overview of the problems with the NPS ATMP process. For more information on ATMPs, please visit rotor.org/ATMP.

Thank you for taking action to defend our valuable air tour industry. HAI appreciates your dedication to the vertical flight community.

Although HAI supports efforts to improve community compatibility, we oppose this amendment being codified into law. HAI and partnering associations consider the proposed ordinance discriminatory because it prohibits one form of vehicular recreation (aircraft operations) and continues to allow others. HAI also considers the proposed ordinance unreasonably broad. If the commission deems specific aeronautical recreational activities undesirable at specific locations, those instances should be addressed case by case. The state of Utah recognizes aircraft operations as an authorized recreational purpose under Title 57-14-102 (6), “Recreational Purpose.” Further, Utah state code defines an airport as “any area of land, water, or both, that … is used or is made available for landing and takeoff.”

The county held a hearing on Dec. 6, 2022, during which significant public opposition became apparent regarding the proposed ordinance. As a result, a vote on the ordinance was indefinitely postponed. Before any future reconsideration of this topic, the commission promised to conduct extensive outreach with stakeholders on both sides of the topic and submit a letter to the Bureau of Land Management (BLM) requesting guidance on takeoffs and landings by motorized aircraft in BLM lands.

While HAI does not support this amendment and submitted comments before the Dec. 6 County hearing, we believe there is always an opportunity to work together with Grand County to discuss the benefits of recreational backcountry aviation.

Workforce Shortage Still Looms according to ATEC’s 2022 Pipeline Report
Each year, the Aviation Technician Education Council (ATEC) compiles information from the FAA, aviation maintenance technician schools (AMTSs), and companies that employ maintenance personnel to produce its annual Pipeline Report. Since last year’s report, the commercial aviation industry has recovered from one of its toughest periods of time: the COVID-19 pandemic. According to ATEC, the 2022 report is an analysis of the pandemic’s repercussions and the effect COVID has had on the pipeline of incoming technicians and the overall workforce.

The 2022 report found that although the number of newly certified mechanics increased last year, the technician pipeline is still 20% below what the industry needs. Furthermore, while the number of individuals obtaining their FAA mechanic certificate increased 33% in 2021, that percentage still falls short of prepandemic numbers. The report points out that the aviation maintenance industry was already facing challenges before COVID-19, which means that meeting demand in the next few years will be even more challenging. Overall, ATEC concluded the pandemic has cost the aviation industry 5,000 new mechanics.

ATEC stated that a lot of work needs to be done and that the council has multiple initiatives focused on directing students to join A&P programs. One of ATEC’s initiatives is to deploy aviation curriculums into high schools across the country to get students on an earlier path to mechanic certification.

Meanwhile, AMTSs are increasing their fair share of mechanic personnel production. Last year, almost 70% of new mechanics went through schools, while the rest came from civilian work experience or the military.

HAI recognizes the council’s efforts in developing initiatives that will improve workforce development. We have been fierce advocates of programs that will get high school students on an earlier path to mechanic certification. As an example, we have proudly developed the Utah Rotor Pathway Program, the first national program that brings the vertical aviation industry, universities, and high schools together to provide both helicopter pilot and helicopter maintenance training at the high school level. We look forward to furthering our work in other states to help ensure that the workforce meets the industry’s needs.

FAA Proposes Regulatory Changes Supporting Advanced Air Mobility
The FAA recently published a notice of proposed rulemaking (NPRM) that would incorporate advanced air mobility (AAM) and electric vertical takeoff and landing (eVTOL) aircraft into the existing framework of regulations that govern commercial and air carrier operations. If approved, this regulation would amend the scope of authorized operations under the FAA regulations to include such operations.

Many of the changes being made to the FAA’s regulations are meant to ensure that operations with powered-lift aircraft are covered. The amendments are critical to ensure that the FAA’s current regulatory framework is updated before the introduction of AAM and eVTOL into the National Airspace System (NAS). This rulemaking also comes in advance of the FAA’s 2023 reauthorization bill.

The administration recognizes the benefits of powered-lift aircraft to our nation. Such benefits include the aircraft’s ability to transport heavier loads at higher speeds and altitudes and its potential to efficiently transport passengers and cargo for short point-to-point distances at an affordable cost. As a result, the FAA has issued a Special Federal Aviation Regulation allowing innovative companies to begin operating powered-lift aircraft. By incorporating AAM and eVTOL aircraft into the existing regulatory framework, the FAA lays the foundation for developing permanent regulations and eventually incorporating them into the NAS.

While HAI acknowledges the significance of this initial step in the certification of eVTOL services, we also acknowledge we still have ways to go before we reach the finish line. We encourage members to submit their comments about the NPRM before Feb. 6, 2023.

NDAA for FY 2023 Proposes Program Facilitating DOD Transition to Sustainable Aviation Fuel
The National Defense Authorization Act (NDAA) for FY 2023 proposes a new pilot program that is intended to facilitate the military’s adoption of sustainable aviation fuel (SAF). The program would mandate that the Department of Defense (DOD) select and develop a plan for at least two geographically diverse department facilities to exclusively use aviation fuel that has been blended to contain at least 10% SAF. The facilities would be required to conduct the pilot program for a five-year period starting no later than 2028. During this period, DOD would closely examine and report to Congress any logistical requirements that would help the military fully transition to SAF.

Recognizing the security implications of climate change, the DOD is planning to implement mitigation strategies that will help improve the environment. The safe transition to SAF will be an essential part of its strategy. While SAF is currently more expensive than conventional fuel, costs are expected to become more affordable. The DOD’s full adoption of SAF may help improve the overall cost for the entire aviation industry.

Sens. Reed (D-R.I.) and Inhofe (R-Okla.) and Reps. Smith (D-Wash.) and Rogers (R-Ala.) this week released the text of an agreement they have reached on the NDAA for FY23. The agreement came after a series of negotiations led by the leadership of the SASC and HASC. This text agreement includes the adoption of the pilot program. For the bill to be enacted, Congress will need to pass the bill and the president will need to sign it.