The urgent need to attract women to, and retain them in, rotorcraft careers.

With the exception of flight attendants, women make up less than 20% of the aviation workforce. In an effort to improve this statistic, the FAA Reauthorization Act of 2018 mandated the creation of a Women in Aviation Advisory Board (WIAAB).

The board was formed to provide independent recommendations to the FAA on how to encourage more women to pursue aviation careers and how to retain women in the industry. Thirty female aviation professionals were selected to join the board in 2020. 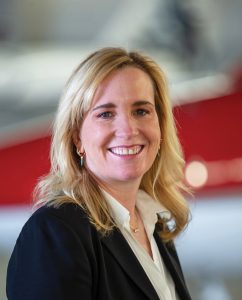 For the next two years, the group worked to review, research, and identify strategies to overcome barriers to women in aviation, culminating in its March 2022 report, Breaking Barriers for Women in Aviation: Flight Plan for the Future. The report highlights key obstacles standing between women and aviation careers as well as ways to engage young women early, foster a passion for aviation, and support women in entering and remaining in the industry.

Of the 30 women on the WIAAB, the vast majority represented the commercial airline market, and not one was employed in the helicopter industry. But one did possess rotorcraft industry experience: Allison McKay.

McKay applied to the WIAAB in 2019, when she was VP of Helicopter Foundation International (HFI), an arm of HAI. Before joining HFI in 2015, she served as Safran’s public affairs director for 13 years. By the time the board’s members were chosen, McKay had moved to nonprofit Women in Aviation International (WAI) as CEO. There, McKay directs programs that expose girls to aerospace careers and provide education and professional development resources for women working in all aspects of aviation.

ROTOR: What did you and the other members of the WIAAB set out to do?

McKay: Our charge was to identify barriers to women’s entry into the aviation field, give recommendations on how to address those obstacles, and then address the issue of retention—how do we keep women in the industry once they’ve decided on that career path?

I don’t think our findings surprised anybody on the board in terms of the fundamental issues about getting more women interested in aviation.

Female representation in the industry has historically been so low that a lot of times it’s hard to find somebody, a mentor or someone you may know growing up, who’s in the industry and can provide you with the pathway or information you need to decide what you want to do with your career.

“Men don’t ask whether they can juggle a family and an aviation career. What are we doing that causes women to feel they can’t?”

Then again, the culture of this industry has been a deterrent to keeping women in it. Whether women have a passion for aviation or not, we as an industry don’t really help women grow throughout their careers, even though we send them messages that we welcome them in aviation.

Some of the recommendations we made, especially for retention, are things that not only the FAA and DOT [US Department of Transportation] are responsible for, but that the industry as a whole can adopt to create a culture conducive to keeping both men and women employed and growing in their careers.

Which recommendations stood out most to you?

On the pilot side, the notion of work–life balance is incredibly important. While I’ve been at WAI, I’ve talked to a number of high school girls and early-college women. A lot of them ask questions starting with, “Can I …?” “Can I be a pilot?” “Can I fly and also have a family?”

The hard part about those questions is these women don’t have anybody in their daily lives they can ask aviation-career questions of or watch to see how it’s done. They don’t see a mother who’s a pilot. That’s a really big concern for them. They don’t want to have to choose between having a family and a flying career. They want to do both and want to know how to do it. 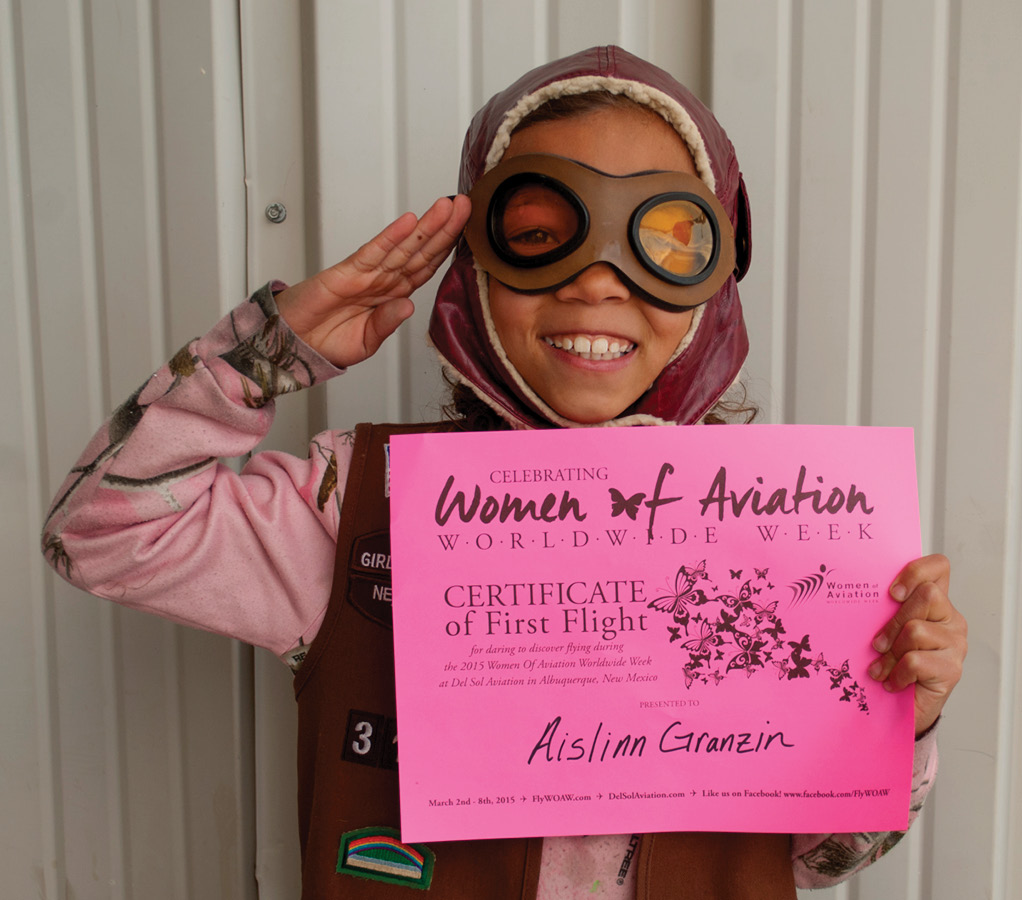 Sixty-four percent of women currently in aviation had chosen the career by age 20, indicating the importance of exposing girls to aviation early in life.

On the WIAAB, we developed a lot of recommendations addressing those concerns. How does the industry create a culture and policies that allow women to have both a family and a career in a way that doesn’t make them feel like they have to choose one or the other?

The topics our recommendations addressed included health care, family-­leave accommodations, and flexible schedules. None of these recommendations qualifies as outside-the-box thinking. It’s just that we haven’t really adopted them industrywide yet.

Some organizations are at the forefront of that movement, but across the board, [our industry makes] it very difficult for women to have both a family and a career. I always come back to the fact that men don’t ask whether they can do both. What are we doing that causes women to feel they can’t?

The other really big piece is getting more young people involved in the industry. That requires a lot more promotion of aviation to the next generation.

Rarely do teachers or counselors in schools—elementary, middle, and secondary—really understand that this is an industry that’s starved for talent. [Editor’s note: According to the WIABB report, Boeing forecasts that over the next 20 years, 612,000 new civilian pilots, 626,000 new maintenance technicians, and 886,000 new cabin crew members will be needed worldwide.]

There’s a need for a huge influx of aerospace workers over the next 20 years, and we have to start educating parents, counselors, teachers, and the kids themselves that regardless of what you want to do with your life, you can do it in the aviation industry.

People think of pilots and maintenance technicians, but there’s so much more to aviation. You can be a writer, photographer, project manager, marketer. You can enter finance, human resources, government relations, management, leadership, airport operations—almost every field you can think of.

With the exception of flight attendants and probably those who work in human resources, every industry segment, every career path, has a very large imbalance of gender and racial diversity.

How do these insights relate to the vertical flight industry in particular?

It was pretty clear that rotorcraft representation was lacking on the WIAAB. To me, that’s a huge concern for the aviation industry overall.

Commercial airlines get a lot of attention and a lot of press about their hiring needs across the board, and they’re well funded and able to mobilize and hire people at a much higher rate than the vertical flight industry. I’d hate for rotorcraft to struggle the most with getting talent, because there are so many different segments in the industry that need highly skilled and trained workers.

Some massive concerns haven’t been well addressed within the rotorcraft community alone. Look at maintenance technicians, for example. The number of AMT schools with equipment to train students on a helicopter or spend any time focused on helicopters is minimal. Yet we expect these students to get their A&P and get a job with a helicopter operator.

Operators want someone who knows how to work on a helicopter, but if you can’t give students that training within their own schools, how are we going to have enough technicians in that segment to fix the aircraft?

Workforce development is a real issue for helicopters as a whole. Some operators are making strides creating programming and building recruiting efforts, but the helicopter industry in general is behind. There’s a real opportunity to create workforce development initiatives industrywide and expand them to attract and retain more women.

And we need to gather data. There isn’t even a way to look up how many female helicopter pilots or helicopter maintenance technicians there are today. The FAA can do a better job of fostering these initiatives by making that data available.

What are the next steps?

The WIAAB was dissolved once our report was made public. We’re looking at government affairs and communications efforts in which the now-defunct board’s members will meet with their congressional representatives to promote the findings of the report and get buy-in from constituents. In addition, we’re trying to mobilize a communication plan concentrating on social media and advertising to show the public that our industry is in need of talent.

Social media—whether YouTube or TikTok or Instagram—is important because it reaches kids where they are. We want to start using some of these platforms’ influencers to help us engage that next generation.

And one of our recommendations was to create a full-time board focused on pushing some initiatives forward. The new, full-time board we’re recommending would be a different group of women, representing different industry segments from diverse backgrounds and professions. We don’t want our report to just sit on a shelf. I’d love to see some connected and active helicopter industry women participate.

Overall culture is incredibly important, and it’s also incredibly difficult to change. It’s not something that happens quickly, but I think the WIAAB’s findings have been well received.

The aviation industry is mobilized in a positive direction. There’s a lot of energy focusing on diversity, equity, and inclusion initiatives.

We have to start having these conversations. It’s going to take every single aspect of this industry to effect change.

If you look at the number of women who are pilots or maintenance technicians or are in the C-suite or any other position, that number hasn’t changed in the past decade-plus.

We really have to get bold as an industry, and we have to be serious about it if we want to attract as many people to the aviation workforce as the projections predict we’ll need.

We can’t rely on the same old methods of attracting and retaining talent in this industry.