By ROTOR StaffJanuary 18, 2022No Comments 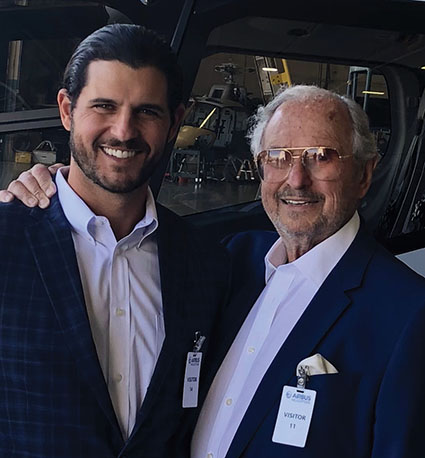 Al and his grandson— and protégé—Adam Trenk. Adam is one of three grandchildren who survive Al. (Photo Courtesy Steven Trenk)

After earning pilot licenses for both helicopters and fixed-wing aircraft, Al in 1980 started Air Pegasus, a corporate helicopter and sightseeing venture based at the West 30th Street Heliport (KJRA) in Manhattan, New York. For a time, he also operated the Downtown Manhattan Heliport (KJRB) near Wall Street. In addition, Al cofounded Sightseeing Tours of America, Liberty Helicopters, and Saker Aviation Services, which operates a chain of US-based FBOs.

Al was instrumental in introducing Agusta helicopters to the United States, and he helped pioneer aviation tourism in Las Vegas with helicopter trips over the Grand Canyon.

Born in Newark, New Jersey, in 1929, Al served in the US Air Force during the Korean War. Afterward, he went on to operate a variety of businesses that included an insurance company, a West Virginia racehorse track, and a chain of outpatient dialysis clinics.

Al is survived by his partner, Ethel Gittlin, and three children, three grandchildren, and four great-grandchildren.