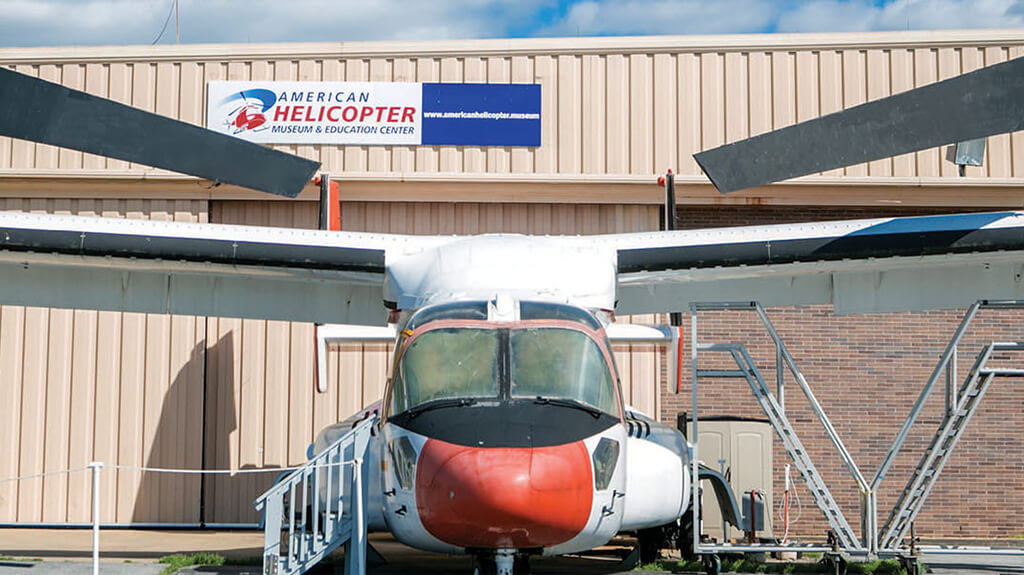 Some of the museum’s collection of aircraft is displayed on its grounds including, from left, the Boeing Model 360, a Sikorsky S-62/HH 52-A Sea Guardian, and a Piasecki H-21 Workhorse. Photo by Lauren Schwarz Photography/AHMEC

A visit to the American Helicopter Museum and Education Center (AHMEC) is a voyage back to a time when helicopter pioneers bravely tested the possibilities and limits of these machines. Located in West Chester, Pennsylvania, the museum is a fitting attraction for an area considered by many to be the one of the incubators of rotary-wing aviation in the United States (see the end of this article to see a list of early rotary-wing pioneers in the greater Philadelphia area).

From Idea to Reality

The AHMEC began as a simple wish: to commemorate the innovation and hard work of aviation pioneers from Pennsylvania’s Delaware Valley. In 1993, as the American Helicopter Society’s Philadelphia chapter celebrated its 50th anniversary, it charged a committee with establishing a lasting tribute to the local men and women who pioneered the development of rotary-wing aircraft. Many ideas were considered, such as a memorial or historical walk.

The committee decided to open a helicopter museum. Their decision was fueled in part by a pledge by Peter Wright, Sr., president of Keystone Helicopters, to donate three vintage aircraft to the fledgling museum. A major figure in the development of the commercial helicopter industry (and veteran of the storied Flying Tigers, a group of US pilots who volunteered to fly for China against Japanese forces in World War II), Wright was instrumental in establishing the museum.

On October 25, 1993, the AHMEC was incorporated as a nonprofit 501(c)(3) organization. Work began under Wright’s leadership, who took on the role of chairman of the board, and a dedicated team of volunteers. The initial goals of the museum were to: preserve the heritage of rotary-wing flight, halt the loss of artifacts significant to its founding and development, and recognize its contributions to society.

After an extensive search for the right location, the fledgling museum’s board rented an 18,000-square-foot vacant hangar at the Brandywine Airport (KOQN) in West Chester, Pennsylvania. The hangar had previously been a production facility for Messerschmitt-Bolkow-Blohm (MBB) helicopters. Educators and volunteers developed the initial exhibit content and renovated parts of the hangar to create a museum space.

Additional financial support from individuals and corporations helped make the idea a reality. Membership grew to 800 founding members, and in just three years, on October 18, 1996, the AHMEC opened to the public.

In 2003, Frank Robinson, founder and president of Robinson Helicopters, made a generous contribution of $1 million to the museum, enabling the acquisition of the Brandywine facility as its permanent home. 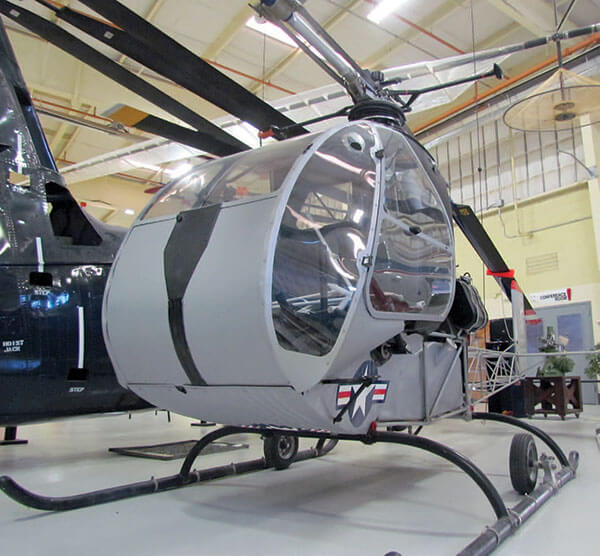 The museum has some rare aircraft in its collection, such as this Sud-Ouest SO-1221 Djinn, a French two-seat light helicopter with no tail rotor. Only 150 were produced. Photo by Martin J. Pociask/HAI

Following through on his pledge, Wright donated a Piasecki HUP 2 Retriever helicopter as the new museum’s first acquisition. Volunteers from Boeing (the original manufacturer, Piasecki Helicopter Corporation, had been acquired by Boeing) donated thousands of hours to restore it. The National Air and Space Museum provided a Piasecki PV 3, Bell Model 30, and Sikorsky XR4 on long-term loan.

Today, the museum features 32 civilian and military aircraft on display, both inside the museum and its grounds (see a list of the AHMEC aircraft collection on page 50). In addition to helicopters, the museum’s collection includes autogyros and convertiplanes.

Accompanying each ship on display is a description of that model, its technical specifications, and some explanation of how it was used or why it is significant. Some displays include video screens showing the aircraft in flight.

The museum relies on the work of its dedicated volunteers, who have contributed thousands of hours to the museum, enabling it to operate on a daily basis. They do everything from operating the facility, serving as docents (museum tour guides), and building and maintaining exhibits, to restoring aircraft and performing research. Many volunteers have experience flying, designing, or working on rotary-winged aircraft, and their work at AHMEC is a labor of love.

Facility features include an exhibit hall, classrooms, conference room, and a children’s play area. A restoration area contains the shop facilities needed to restore acquired aircraft to display condition. A Sikorsky R 6 is currently being restored by volunteers; next in line are a Kaman HH 2 and a Piasecki HRP 1.

For many years, the AHMEC held Rotorfest, a two-day air show and open house that drew thousands of visitors. Today, it often holds helicopter-themed events for aviation enthusiasts in the local community, such as a Father’s Day event, World Helicopter Day, and an annual fundraising gala.

The museum also hosts other special events, such as a family reunion and commemoration for the family of Harold Pitcairn, an aviation pioneer from the area who invented the autogyro and held a number of patents important in rotary-wing aviation.

“Stubby,” a traveling educational helicopter (a Hughes 269A/TH 55A Osage) is the museum’s mascot and ambassador at schools, camps, and community events, such as the annual West Chester Christmas Parade and the Philadelphia Science Festival. Acquired in 1998 by the museum, Stubby is a nonflying interactive helicopter. Students can sit in the cockpit and operate the controls while docents teach the fundamentals of helicopter flight. The museum’s other traveling helicopter is the Cheerful Chopper, a Hughes 369 OH 6 OH 6A Cayuse. 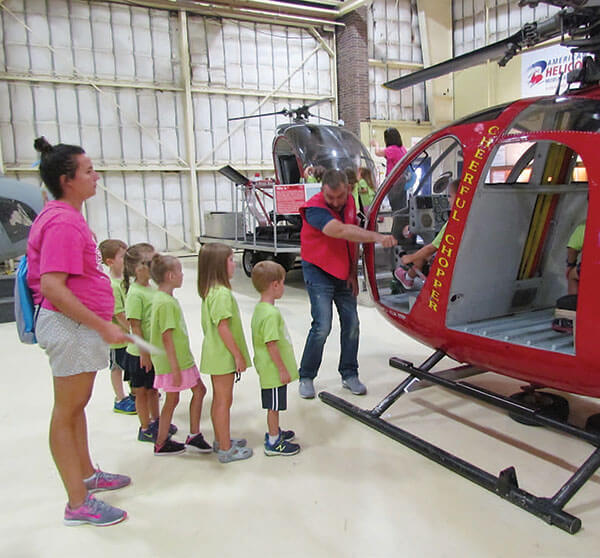 Inspiring the Next Generation

Since its founding, the AHMEC’s mission has enlarged to include inspiring the next generation of engineers, scientists, innovators, pilots, mechanics, and inventors. The museum’s education programs for children in grades pre K through 12 reach thousands of students every year, both at the museum and at locations in the community.

A field-trip destination for many Philadelphia-area schoolchildren, AHMEC has been voted Best Scientific Outing for Kids by Aviation History, Best Science Museum for Children by Philadelphia, and Best Educational Outing by Main Line Today. Who knows how many aviation careers started there?

The museum has been recognized for its many education programs for children, such as Girls in Science and Technology (GIST), a collaborative effort developed by AHMEC and the Girl Scouts of Eastern Pennsylvania. In this fun, hands on program, girls engage in classes in science, technology, engineering, and mathematics (STEM). Other AMHEC programs for children include an after-school program, workshops on topics such as robotics, and Science Saturdays.

Two RotorWay Scorpions with the Hughes 369 (OH-6/OH 6A) Cayuse, aka the Cheerful Chopper, one of the two helicopters in the AHMEC collection that travels to outside events. Photo by Martin J. Pociask/HAI

In addition to the aircraft, the museum offers visitors other glimpses into the history and importance of rotary-wing flight. Its state-of-the-art theater shows historic footage related to the helicopter industry, and rotorcraft toys and models are displayed along the museum’s walls.

As the AHMEC grew its collection of papers and objects related to vertical flight, the Renzo Pierpaoli Memorial Research Library was established. It contains more than 12,000 documents, artifacts, films, and memoirs about the founding and evolution of the helicopter that visitors and members can access. Archives volunteer Larry Barrett serves as historian and museum curator, cataloging its many files.

Among the library’s holdings are some that have a special relationship with Helicopter Foundation International (HFI). The John Slattery Collection comprises 16 file cabinets containing photos, books, and other historical documents of the helicopter industry. A helicopter pilot, Twirly Bird member, and historian, Slattery founded HFI and served as its curator.

The foundation donated the collection he assembled over 50 years in the industry to AHMEC in spring 2003. Barrett and a group of volunteers have spent several years scanning, digitizing, and indexing the contents of the collection. The process is ongoing.

Visit the History of Our Industry

Today, more than 35,000 adults and children, from both the United States and abroad, visit the museum annually to learn about the history of rotorcraft aviation. If you — or someone you love — is a fan of these aircraft, then plan a visit to the American Helicopter Museum and Education Center. You won’t be disappointed.

Drive or Fly to Visit

Plan Your Visit: The museum is accessible by car or you can arrive by airplane or helicopter. Located on the north side of Brandywine Airport (KOQN), AHMEC has its own helipad, ramp, and runway access adjacent to the museum.

A Center of Rotary-Wing Innovation

Although Igor Sikorsky was headquartered in Connecticut, many trailblazers in rotary-wing aviation lived and worked in the greater Philadelphia metropolitan area. Among the many vertical-lift pioneers who called the region home were:

The area was, and is, home to many pioneering aviation companies:

Martin J. “Marty” Pociask retired from Helicopter Foundation International (HFI) in 2018 after 17 years with the foundation and HAI. He most recently served as curator for HFI and was a former editor of ROTOR magazine. Marty is a talented artist who also teaches art.