By Rotor DailyJanuary 13, 2023No Comments

Helicopter Association International (HAI) is pleased to announce that 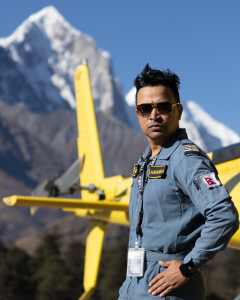 Altitude Air Operations director Ananda “Andy” Thapa is the 2023 recipient of the Salute to Excellence Humanitarian Service Award. The award, sponsored by Sikorsky, a Lockheed Martin company, honors the person or persons who best demonstrate the value of rotorcraft to the communities in which they operate by providing aid to those in need. It will be presented Mar. 6, 2023, at HAI HELI-EXPO 2023 in Atlanta, Georgia.

A hero to countless individuals, Ananda Thapa is humble by nature. Born in the remote area of Dhading District in Nepal, Thapa grew up in extreme poverty. As a child, he averaged one meal a day and had no electricity, telephone, or even a nearby medical facility. However, he did have a dream. He wanted to fly, and he worked hard in his studies, earning a spot in a Nepali Army education program in Kathmandu.

Because his family could not afford higher education, Thapa enlisted in the Nepali Army’s officer program, hoping to be selected for pilot training despite it being exceptionally rare in the army. Timing was on Thapa’s side, however. Civil war broke out in Nepal during his second year of cadet officer training, creating a need for helicopter and fighter pilots. Amid fierce competition, Thapa was chosen and learned to fly helicopters.

After eight years flying in the Nepali Army, Thapa accepted a civilian helicopter pilot position where he could apply his experience and understanding of the small villages, remote regions, fast-changing weather, and  terrain of Nepal to perform rescues and extractions.

Thapa has since been credited with hundreds of, if not well over 1,000, technical rescues throughout Nepal and surrounding regions. He is one of the elite skilled pilots who have extracted multiple climbers from Mount Everest, landing as high as Camp 2 above 21,000 ft. (6,401 m). He participated in the much-publicized search for Bulgarian mountaineer Boyan Petrov in 2018, which unfortunately ended with no sign of Petrov.

In 2022 alone, he participated in three large rescues: He airlifted several climbers from Mount Everest’s Camp 1 and Camp 2, evacuated two people at 22,349 ft. (6,812 m) on Ama Dablam using a human longline technique, and, together with another company rescue pilot, rescued 72 Nepalese and foreign visitors from a remote region of Nepal who had been stranded by extremely bad weather.

Thapa has also helped families receive closure. In 2018, famed mountaineer Kim Chang-ho, the first Korean to summit the world’s 14 tallest mountains without supplemental oxygen, was killed along with eight others at the base camp of Gurja Himal in Nepal. After searchers discovered their bodies, Thapa transported them down the mountain via longline.

The one rescue that stands out the most in Thapa’s mind took place on Jun. 18, 2021. Five days before, more than 100 people trekked to areas bordering Tibet from the Nepalese town of Manang to collect Yarsagumba, a medicinal fungus, and did not return. Thapa took the lead in the search, flying their route up the mountains. While most were feared dead, Thapa found them all alive between 14,000 ft. (4,267 m) and 17,200 ft. (5,243 m), stranded after heavy snowfall. He transported the most critical, about 70 in all, back to a lower-altitude safe zone within an incredible two hours and 20 minutes. He also delivered a supply drop of food and other survival goods to the remaining 30 foragers as the weather deteriorated and fuel ran low. Thapa says this rescue was the most successful and also the fastest he has conducted in his career, but only one of a countless number that have made the helicopter the real hero to the people of and visitors to Nepal.

The Humanitarian Service Award will be presented during HAI HELI-EXPO 2023. HAI HELI-EXPO®, the world’s largest helicopter trade show and exhibition, will be held at the Georgia World Congress Center in Atlanta, Georgia, Mar. 6–9, with the exhibit hall open Mar. 7–9. For more information on HAI HELI-EXPO 2023, visit heliexpo.com.