We know how to prevent these types of accidents. So why aren’t we doing it?

It was with both sadness and disappointment that the National Transportation Safety Board (NTSB) had to investigate yet another sightseeing aircraft crash, this one in Kekaha, Hawaii, on the island of Kauai, that took place on Dec. 26, 2019. The investigation found that the pilot and his six passengers died after he decided “to continue flight under visual flight rules (VFR) into instrument meteorological conditions (IMC), which resulted in the collision into terrain.”

You can read more about this accident in the NTSB accident investigation report, but you really won’t find any new or surprising information there. The dangers of continuing VFR flight into IMC conditions, as well as strategies for preventing tragedies of this kind, have been outlined for years. The NTSB has made long-standing recommendations to industry and the FAA that would prevent these types of accidents. Yet, we see the same types of events occur over and over and over.

As Yogi Berra famously quipped, “It’s like déjà vu all over again!” However, we at the NTSB feel no satisfaction about being proven right once again. Instead, the NTSB wants the FAA and operators to address the problem and end these types of accidents.

Hawaii tour helicopters often have cameras outside the cockpit to provide souvenirs for customers. While the accident helicopter unfortunately did not, videos from other tour aircraft in the area clearly tell the story—just look at the photo below. The accident pilot wasn’t the only one taking unacceptable risks that day. It’s obvious that complacency and normalization of deviance exist on the part of several tour companies’ management and pilots. 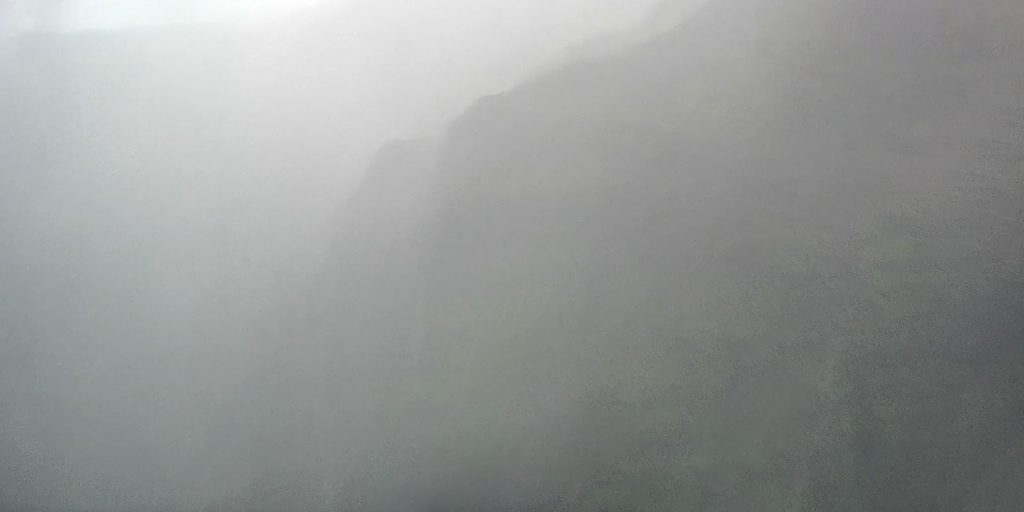 In addition to showing the weather conditions encountered by the accident aircraft, this image and similar ones from tour videos taken by helicopters operating nearby demonstrate the normalization of deviance by local tour companies and their pilots. (NTSB image)

The image from the video makes clear that what occurred on the day of the accident wasn’t inadvertent flight into IMC but deliberate. The commercial incentive to push through the clouds and continue the tour seemed to have outweighed the pilot’s duty to conduct the flight safely. Most of the time, luck wins out and everyone survives, and so the practice continues. The harsh truth is that the absence of a crash, even for years, doesn’t necessarily mean that things were being done right. Those same risk factors will come together again for the next flight.

The NTSB has asked for in-cockpit image recording for years. Modern technology makes this inexpensive and serves two purposes: crash reconstruction and, more importantly, crash prevention. Videos like these can pave the way for better safety programs and prevent more unnecessary deaths. Yet, I’m not confident that any tour company management saw these videos as an opportunity to step forward and make clear to pilots their commitment to risk management and safe operations. The pushback from pilots and companies about monitoring their own flight ­operations and taking nonpunitive corrective action is inexplicable to me, especially if the equipment is already installed.

Helicopters, especially small ones, are notoriously difficult to fly after visual reference is lost. The so-called proficiency checks for emergency escape from inadvertent IMC are ineffective and likely provide a false sense of security. The videos show that the escape mechanism available to most helicopter pilots, the ability to land almost anywhere in deteriorating weather, is often not available in the Waimea Canyon and the northern part of Kauai. The terrain is rugged and covered with trees that make a successful landing improbable.

Again, this is an area where there are known methods of mitigating the risk of spatial disorientation. Simulators or perhaps virtual-reality headgear that could be worn in an actual aircraft present more realistic training. Stability augmentation systems and basic autopilots would also improve the safety of VFR air tour helicopters. Economics is ever the driver of safety decisions for regulators and operators across all modes of transportation. But if you think prevention is expensive, do the math on the real cost of crashes.

While both the NTSB and FAA proclaim the benefits of a systemic approach to managing safety, the FAA has ignored its own guidance. In an area where rapidly changing weather conditions are well known, real-time weather observations for VFR air tours are essential. Again, cameras provide a relatively inexpensive technology to accomplish that. Likewise, having ADS-B and radio coverage in the area would allow for both collision avoidance and pilot reports that would enhance safety tremendously. An antenna is all that’s needed. All these items have been recommended to the FAA for years.

The accident flight was in clear violation of the Hawaii Air Tour Common Procedures Manual (HATCPM), a document published by the FAA’s Honolulu Flight Standards District Office (FSDO) that details standard procedures for air tours in that state. Updating the HATCPM and developing cue-based weather training are safety initiatives the FAA has said it would undertake. Despite years of delay, neither has been completed.

The agency’s Honolulu FSDO was set up to fail because upper management didn’t provide it with the personnel or funding to allow for training, travel, and proper oversight of air tour operations in the state. These are performance activities, as is piloting, that require the same attention to personnel qualifications and detail, along with a willingness to constantly self-evaluate.

The FAA has failed to address the safety issues in Hawaii that have been brought forward over the decades. But we can’t let that agency’s inaction limit our attempts to improve aviation safety. Why not have industry update the HATCPM and develop cue-based weather training, and then let the FAA sanction it? Tour passengers deserve that much!

The NTSB report on the Kekaha accident made 11 ­recommendations to the FAA—all of which had been made previously. But we get no satisfaction from saying, “We told you so.” It’s time to do better.

Bruce Landsberg was appointed vice chairman of the US National Transportation Safety Board in 2018. An Air Force veteran and ATP-rated fixed-wing pilot with more than 7,000 flight hours, he is a recipient of the FAA Wright Brothers Master Pilot Award. Bruce has been active in aviation safety for decades, including serving 22 years as president of the AOPA Foundation and Air Safety Institute.