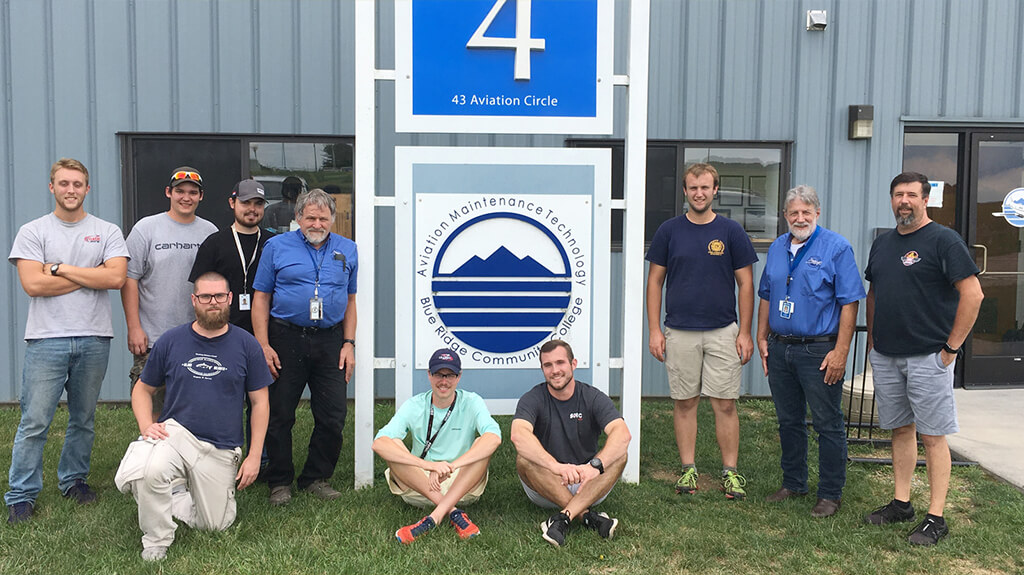 Another Maintenance Tech Heads to the Airlines

Are we ready to lose this generation of maintenance technicians?

I recently had the opportunity to attend an aviation maintenance technician (AMT) school graduation. The students had worked hard for this moment, and it should have been a great day as I watched eight young men graduate, ready to take their FAA licensing exam and become working AMTs.

But the graduation instead left me wondering how our industry will ensure a sustainable future.

I first learned about the AMT program at Blue Ridge Community College (BRCC) in Weyers Cave, Virginia, through my work at HAI. Allison McKay, vice president of Helicopter Foundation International (HFI), and I visited with the cadre and leadership of BRCC in the spring of 2018 to discuss a possible partnership between BRCC and a local high school.

This was part of a joint effort by HAI/HFI staff to provide more students with access to aviation maintenance education. We have all recognized that our industry’s need for maintenance technicians and pilots isn’t being met currently. This gap is expected to widen in the coming years as demand for these positions rises while experienced personnel age out of the workforce.

I had attended a Part 147 school many years ago, but by 2018, my knowledge of the current Part 147 curriculum was narrow. Fred Dyen, PhD, who runs the BRCC AMT program, explained the school’s program to me and Allison.

My son Corey, a recent graduate of Averett University in Danville, Virginia, had shown interest in aviation maintenance, so the timing was perfect. I shared the options with him that evening. It was a no-brainer, and he was soon enrolled to attend the 12-Month Certificate track, beginning in August 2018.

Fast-forward to August 2019. It was my honor to see Corey and his fellow students graduate. Each one had an AMT job to go to when they finished, pending the award of their A&P certificates.

The students had already completed the general written exam and the oral and practical exams. The only obstacles remaining were the airframe and powerplant written exams. These tests can’t be taken until the students have the school certificate in hand upon graduation.

Corey graduated from the course on a Friday and took the airframe and powerplant exams the next Tuesday. He was awarded his FAA A&P certificate that same afternoon at the Richmond, Virginia, FSDO. As I told him, “With that in your hand, you’ll never go hungry.”

Here’s the discouraging part of the experience. Out of the eight students in that class, there were three who told me they wanted to get into the helicopter industry. In the end, here’s the number who chose that path: zero.

Airline recruiters came to the school, actively seeking young, motivated, self-starting mechanics to replenish their ranks as more experienced mechanics move up to the majors. Along with a job, the airlines offered:

Let’s contrast that with what Corey and his classmates heard from the helicopter industry: [insert cricket noise here].

That’s right. No helicopter maintenance recruiter ever cast a shadow on the school door. Instead of being sought after and courted as valuable hires, those students who wanted to get into the helicopter industry had to go out and look for a job. Even when they did that, however, they couldn’t find any position they were qualified for. Everything they found on the job boards required a minimum of three years of experience.

Everywhere I go representing HAI, I hear that our industry is starving for helicopter pilots and mechanics. One reason often given is that young men and women are just not choosing jobs in aviation. That may be correct, but I also see that we’re not helping ourselves.

Not so long ago, recruiting in this industry consisted of posting a job and then sitting back and watching the resumes roll in. Those days are over.

When it comes to hiring the next generation of the aviation workforce, the Part 121 operators are beating us every way possible. They actually recruit, going to where the students are and offering competitive salaries and great benefits to entry-level personnel. It’s unlikely that once a young mechanic goes to the airlines that a helicopter operator will ever lure them away.

In early 2018, HFI held a workforce development seminar called Heli-Futures at HAI headquarters in Alexandria. Folks attended from across the industry sectors. Our goal was to find ways to end the pilot and mechanic shortages that exist now and the even more extreme shortfall that’s forecast for the future.

The overwhelming consensus among attendees was that increasing salaries was a choice by an individual company and, as a practical matter, wasn’t something we could productively discuss. So we talked about nonsalaried benefits. In the end, I thought the seminar was productive and would lead to changes that would make the helicopter industry a competitive option equal to the airlines. That hasn’t yet happened.

Some large helicopter companies have acquired other operators that serve to feed pilots into the mother ship when there’s a need. That’s a positive development, as pilots benefit from having defined career pathways as they meet hour and experience requirements. You can see this in play predominately in the airline industry and in limited form in the helicopter community.

What we don’t see are these types of building blocks for maintenance technicians in the helicopter industry. We’re far behind in providing structured shop training for mechanics before they’re sent out to work solo in the field.

My son was born into a helicopter family; JP-8 is in his DNA. He has a pilot license, A&P certificate, and a bachelor’s degree in aviation business. He took it all to the airlines.

We must get better if we’re going to compete.