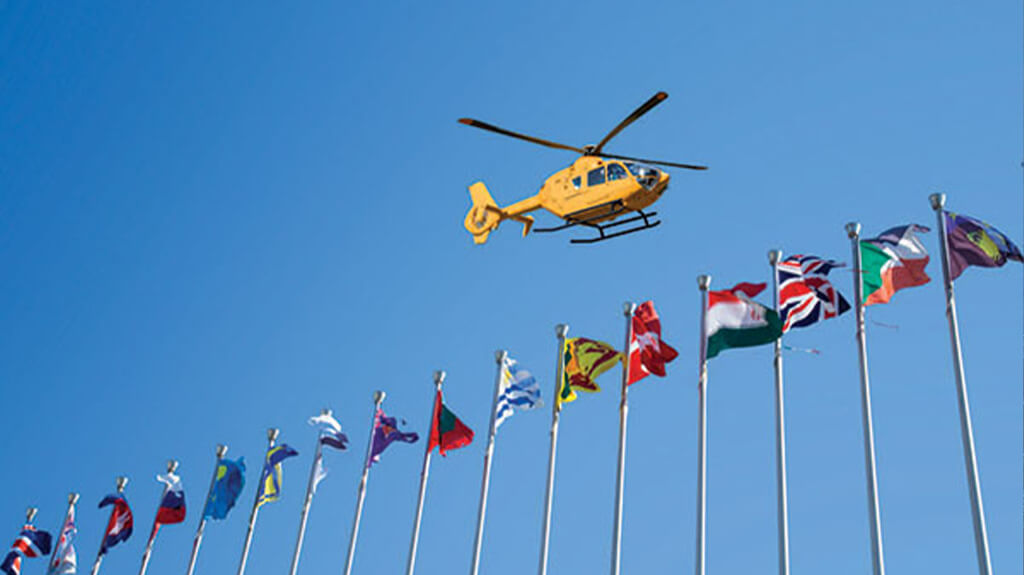 ROTOR Magazine2018 SummerAdvocating for You

Before Google Could Translate

My first trip abroad was to the Soviet Union. As a youngster growing up at the end of the Cold War, I was not sure what to expect.

My stay with a host family was wonderful, and it turned out that the Russian family was a lot like mine: the kids complained about doing chores and didn’t like vegetables, but everyone loved Grandma’s cooking. It was eye-opening to see firsthand how many similarities we had.

My Soviet summer came to an end too soon, and I headed home … just missing the real excitement a couple of weeks later when, on August 18, 1991, Russian president Boris Yeltsin lead the resistance to an attempted coup. The coup was unsuccessful — but it set the stage for the breakup of the Soviet Union by the end of the year.

It was such a fascinating adventure, I had to go back. A few years later I returned, this time to the Russian Federation. By this time, I was a private fixed-wing pilot and had been working for some time with my dad at a small FBO that he ran at a local general aviation airport.

Along with other operations, we ran some cargo flights in Piper Navajos and Beech 99s. I don’t recall why, but at the time there was a lot of chatter in our area about the Soviet Antonov An-2 and its possible use in cargo missions. Naturally, when I returned to Russia, I was determined to discover if and how this single-engine biplane could be used in our operations.

I told my host family of my quest to talk to some pilots. A few weeks later, I found myself packed into their little Lada, headed out to a “surprise.” We drove through the beautiful wooded Russian countryside until suddenly, we pulled up at a little airstrip where members of an aero club were critiquing the aerobatic flight skills of their fellow pilots.

I was introduced to a number of the pilots and immediately hit it off. Several proudly introduced themselves as former members of the Soviet Air Forces, noting with a grin that they were trained to shoot down my country’s aircraft. I told them of my respect for their flying ability and remarked how great it was that we could all now come together as friends with a shared love of aviation.

When I stop to think about it, this was quite a moment. What really separated me from my new friends?

We grew up under two opposite political systems and, as they dryly remarked, we had considered each other to be enemies, trained to shoot each other down. But once we got over that minor historical speed bump, it was apparent that, just like my Soviet host family, we were more alike than different. We enjoyed talking about aviation and adventures, like any long-lost friends.

While watching the club members go through their aerobatic practice, I noticed a couple of An-2s parked on the far side of the grass strip. I asked all about them and the commercial prospects of bringing an An-2 to America. At least that’s what I think I said. I might have said, “I like chocolate ice cream” or even, in my rudimentary Russian, “Ice cream like chocolate me.” There’s really no way to be sure.

There was a commotion behind me and suddenly, a large pack was slapped on my back — a parachute, as it turns out. I was led to a Yak-52, the primary Soviet trainer aircraft, and promptly secured in the back seat.

At that point, my mind was racing, trying to remember exactly what I said about the An-2. I was hoping I hadn’t agreed to purchase a fleet of the aircraft. I was also thinking I didn’t catch a word about how to use the parachute. One of my new buddies bounded in and asked if I was ready to go. I wasn’t sure where we were going, but the only right answer at that point was “Da!”

Next thing I knew we were over the Gulf of Finland, an arm of the Baltic Sea. Then I heard over the headset the Russian equivalent of “Get ready.” My friend then took me through my first aerobatic experience. To say I was having the time of my life would be an understatement. I squealed like a little kid with such joy that my new friend burst into laughter as he took us through one aerobatic maneuver after another. He even let me do a few loops.

I was wishing we would stay up forever, but alas we headed back to the field and he let me land, which was a new experience from my perch in the back. We rolled up to the ramp and relived our flight, talking till it was finally time to leave. I stayed in touch with my friends for quite some time until addresses changed and mail was lost. (This was, after all, before email.)

Why this trip down memory lane and how does it relate to HAI? Well, at HAI we work on your behalf to keep the rotors turning. We connect people and ideas to advance the industry. No matter where you live in the world, as HAI members we are connected by our love of aviation.

We may have grown up in different political systems, countries, and cultures, but we share a unique bond. Who knew that, just like me, Soviet kids didn’t like vegetables? It wasn’t until I was there, speaking and connecting with people, that I realized that we had many similarities we could build on — similarities that formed a bridge over our differences.

Flipping through the air over the beautiful Gulf of Finland with my new Russian buddy, the one trained to shoot down American aviators, we shared laughter and the sheer joy of the freedom of flight. It was an incredible experience brought about by a host family seeking to connect a kid and his crazy scheme for a Russian aircraft with the local Russian aviation community.

HAI, located just across the river from Washington, D.C., frequently works with regulators and legislators on issues important to our industry. But frankly, they wouldn’t be interested in working with us if we didn’t work for you.

Elected officials put a high priority on helping their constituents back home, and they know that HAI connects them with issues and solutions for those voters. Our power in advocacy comes from the grassroots strength of our members.

Advocacy works the same way in any country in which our members live. HAI is a resource for you to connect people and ideas. We have many affiliates throughout the world who can furnish expert analysis on local operational issues and opportunities. HAI is ready to help you make that connection.

This coming October, HAI will be attending and exhibiting at Helitech International in Amsterdam. If you are planning to be there, stop by our booth and let’s chat. Building networks and relationships is how we strengthen this industry and move it forward. We can all learn and build from each other’s experiences.

To craft common-sense aviation polices, our elected officials, no matter the country, need the expertise our industry can provide. Let’s learn from each other about how effective education and advocacy campaigns can be built. How have you been able to influence your government’s legislative or regulatory decision-making process? Share your victories as well as defeats. We can all learn, refine, and improve our approach in sharing our message about the positive contributions of the helicopter industry.

Finally, get involved politically. For HAI members in America, don’t forget that Congress has an August recess and the House is scheduled to be home in the districts campaigning. This is the perfect time for you to schedule a visit with your elected official. Invite them to your place of business and show them the good work you are doing for your community.

By building stronger networks among the aviation community — and inviting others to understand our contributions to a healthy economy and safe communities — we will build a successful, united helicopter industry. In English, we call that “keeping the rotors turning.” How do you say it in your language? Let me know at cade.clark@rotor.org.