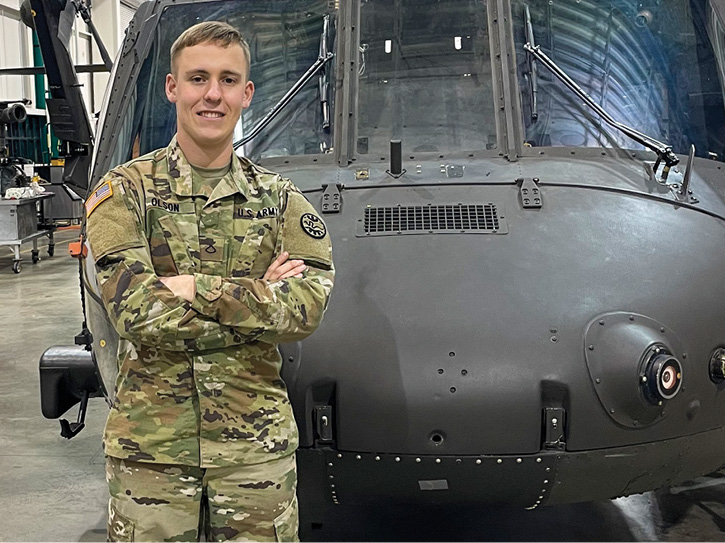 Imagine it’s a cloudy, breezy day but good weather for a solo flight as you train for your private pilot license. Halfway through your trip, the weather worsens. You’re on the upwind climb and beginning your crosswind turn in the traffic pattern when a wind shear hits and starts to pull you into a roll. How do you recover?

Not easily, Blake Olson can tell you. The aspiring Black Hawk crew chief experienced the harrowing flight while seeking his private pilot’s license in 2020. Olson, a mechanic for the Idaho Army National Guard and now a fixed-wing private pilot, avoided a possible fatal accident that day by reacting quickly, moving the aileron in the opposite direction and pulling out of the roll.

“It shook me up, because I knew if I hadn’t reacted the way I did, I probably wouldn’t have recovered and I’d be the next news story,” says Olson. “After that, I instantly turned back and landed. I didn’t fly for a little while [afterward].

“The main takeaway from my story is that weather is intense and unpredictable and can change at any point. It deserves respect, as does flying any kind of aircraft in any scenario,” Olson adds.

Some pilots aren’t comfortable talking about a close call. But Olson wants to share his story, because he believes doing so can help others avoid accidents and understand the importance of prioritizing safety in their operations and training.

“I’ve overcome my [aviation] fears by accepting that there are some major risks in my chosen career path as a pilot and mechanic,” Olson says. “But if I make sure I’m doing my job correctly and learning everything I need to know to complete the job safely and efficiently, I’ll be much better off. Accidents happen, but if I’m ever involved in one, it won’t be from a lack of training or knowledge.”

That mentality has had an extremely positive impact on his training, says Olson, who’s currently enrolled in the fixed-wing pilot program at Treasure Valley Community College in Ontario, Oregon, working to obtain his commercial pilot ratings so he can eventually fly fixed-wing aircraft in the civilian sector.

Olson uses his military educational benefits to pay for his pilot training. He also uses his experience working with military and civilian aircraft to better himself as a mechanic. He’s currently apprenticing under the mechanic at his flight school to gain experience and training to receive his A&P license. He hopes this approach will allow him to earn real-world experience in maintaining aircraft and set him up for success as a mechanic.

Ultimately, Olson hopes to use his career in aviation as a means to help others by working in sectors such as aerial application, air ambulance, fire support, and charitable work.

An Early Interest in Aviation

Like so many in aviation, Olson’s interest in the field began in childhood. He fondly remembers his parents and grandparents taking him to an air show at a local airport in his hometown of Twin Falls, Idaho, when he was seven or eight years old.

As he approached the end of his junior year in high school, Olson decided he wanted to find a job that combined two of his passions: community service and aviation. With the aim of pursuing dual career paths as an aircraft maintenance technician and a pilot, he joined the US Army National Guard as a UH-60M Black Hawk helicopter mechanic.

As with most students beginning a career in aviation, finances were one of the first obstacles Olson encountered. “I’m an aspiring pilot and mechanic, and those two fields are very expensive to fund to receive the proper training to become qualified,” he says.

Olson learned about HAI and its scholarship program while attending Idaho State University, and he applied for the association’s Maintenance Technician Certificate Scholarship in October 2021. After learning he had won the scholarship, he quickly made plans to use the monetary award to help pay for the remainder of his A&P training, which he plans to complete in the next two years.

“This scholarship means a lot to me because the aviation industry isn’t cheap, by any means, and every little bit helps,” says Olson. “Sometimes you just need that little bump to help make ends meet, and that’s what this scholarship will do for me.”

Olson says he’s honored to be chosen for a scholarship by an organization such as HAI because he feels it shows that other aviation professionals recognize the hard work he’s put into his career. His advice to newcomers in the industry? Stay focused and give your best at all times.

“As long as you always think about the end goal and all the things you can accomplish, there’s no obstacle you can’t overcome,” Olson says. “It’s this mindset that pushes you forward every day.

“We have to treat every day like there’s no tomorrow,” Olson adds. “That means you must get up and better yourself today because it’s all you have. Nothing is guaranteed.”

Olson can already see his hard work paying off and says his experience with HAI will benefit him for the rest of his life. In addition to the financial aid the scholarship provided, Olson will get a complimentary show-floor pass to HAI HELI-EXPO 2023.

“Going to Expo is so important, because it gives me the chance to meet new people in the industry, make connections, learn about aviation, and make myself better with the knowledge I receive,” says Olson. “To me, that’s priceless. If I hadn’t won the scholarship, I wouldn’t have gotten this opportunity that will help guide me in my career going forward.”

A big fan of engineer, pilot, entrepreneur, and YouTuber Mike Patey, Olson says every pilot should learn as much as possible from seasoned aviators, even those they’ve never met. Everyone has a story and experiences that can help you along the way, he says.

“I haven’t met Mike yet, but I’ve been watching his videos for years, and he’s so incredibly knowledgeable,” says Olson. “He uses his abilities, resources, and knowledge to help other people. Not only that, but he has a blast doing it. You can tell he has a sincere passion for what he does, and that’s inspiring to me.”

Olson gives a lot of credit to the pilots and mechanics in his unit, as well as his CFIs, because they’ve helped advance his career and have gotten him through some tough times.

“They’ve taken the time to teach me what they know to make me a better pilot, crew chief, and mechanic. I can never thank them enough.”