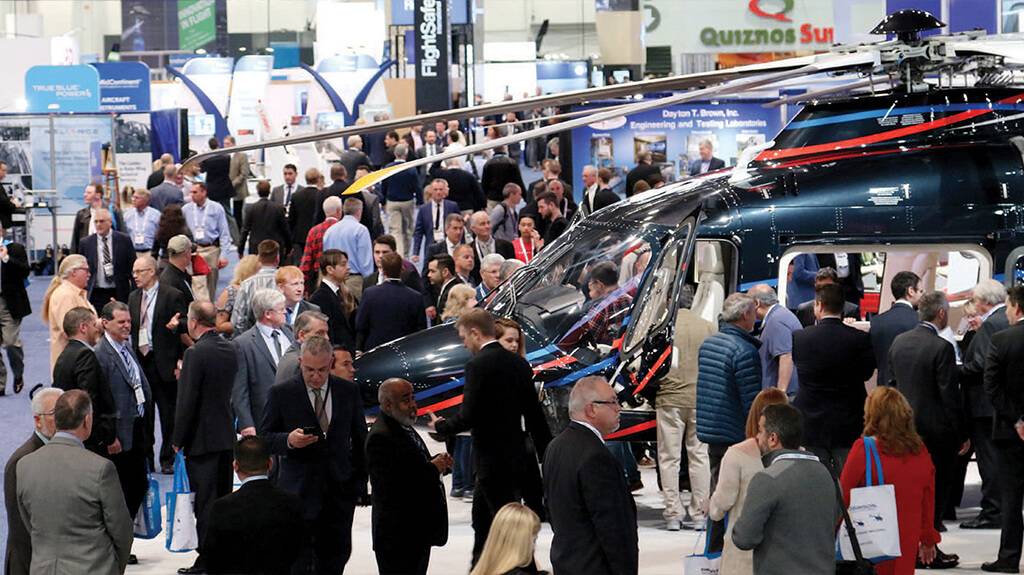 Business Bounces Back at HAI HELI-EXPO 2018

The mood at HAI HELI‑EXPO 2018 in Las Vegas was one of optimism, with several small signs — and one big victory — pointing toward bluer skies ahead for the helicopter industry.

“The exhibitors really loved the activity on the floor, and the ability to bring in aircraft using our temporary heliport just outside the doors was a real benefit,” says HAI President and CEO Matt Zuccaro. “From an HAI perspective, we were able to do what we wanted most — focus on safety. We rolled out our online certificate program for safety managers and were able to provide 50 free Rotor Safety Challenge courses, where in many of them it was standing room only.”

While business was brisk on the show floor, a victory in Washington, D.C., on February 28 also fueled the fires of optimism. U.S. House Transportation and Infrastructure Committee Chairman Bill Schuster (R-Pa.) withdrew his proposal to privatize US air traffic control (ATC) services from the House FAA reauthorization bill, ending, for now, talks of privatizing ATC. Under the proposed scheme, US ATC would have been run by a private board dominated by airline interests — a group unlikely to prioritize services for general aviation (GA).

“This is a great example of what can happen when people unite and speak with one voice. I offer my deepest appreciation to the entire GA community for its tireless work defending our industry,” Zuccaro said in an email to all HAI members shortly after the announcement. “HAI stands committed to working with Congress to modernize the FAA to maintain its world-class level of service and safety.” 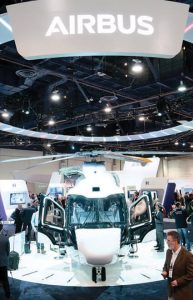 HAI HELI‑EXPO was the impact of a recovering oil industry. With improvements in the price of oil, a key indicator of helicopter industry health, recovery seems to be on the way. As proof, manufacturers exhibiting in Las Vegas reported increased inquiries and orders while parked aircraft are beginning to take to the skies.

“The good news is there is an increase in the price of oil; an upward trend is coming,” says Zuccaro. “The helicopter industry is extremely resilient, and the diversity of a helicopter is a big part of the success of our industry.”

At Sikorsky, where several of its models are popular oil-and-gas-support aircraft, the upward trend is very real and opening new opportunities. “New oil and gas exploration and leasing is slowly picking up with the increase in oil prices and the release of exploration blocks on the Mexican side of the Gulf,” says Dana Fiatarone, vice president of commercial systems and services at Sikorsky. “This opens the door for medium-range helicopters. In 2017, we certified the S-92 in Mexico in preparation for this move.”

Signs are similar at Bell, where the manufacturer is seeing increased interest in the Bell 525 Relentless. “We feel these inquiries are attributed to an improving offshore market, as the Relentless straddles the super-medium and heavy-aircraft line, something being closely reviewed by offshore operators,” says Chuck Evans, director of marketing at Bell.

At Safran, Federic Bugeon, vice president of sales and marketing, sees changes across the industry, not just oil and gas. “After three years of a flat market, we are now starting to see helicopter air ambulance (HAA), military, tourism, and utility showing the first signs of ramping up to a new cycle,” he says.

This newfound optimism may be attributed to several factors, from talk of increased infrastructure spending by the current US administration to changing trends in specific sectors, such as HAA. Chris Emerson, president of Airbus Helicopters Inc., has seen changes in HAA, for example, where demands by customers are driving aircraft decisions.
“Today it is all about the level of service,” Emerson says. “Hospitals are requiring more equipment in the helicopter, such as ECMO machines and Isolette incubators, which requires larger aircraft. I see these hospital requirements leading to new twin helicopter sales.

“There is also a big need for market reentry and replacement of aircraft. The North American market is behind on replacing old aircraft. In fact, during this downturn we’ve seen something that is very uncommon — operators letting their warranties run [out]. Now we’re beginning to see operators looking at replacements, which has started with utility operators. I also see the tax incentives translating into new business for operators, which is one more [avenue] to bring in new aircraft.”

The VIP market is also taking flight. Sikorsky’s Fiatarone says his company is seeing increased interest by VIP customers in the S-76D, mainly in North America, but also globally. Emerson also says Airbus’s largest growth in the past year has been in the VIP sector.

“Airbus didn’t explore this in the past, but recently we’ve seen the VIP percentage of our business rise to 20 percent,” Emerson says. “We had 16 new customers in 2017, and half of them were private VIP owners.” 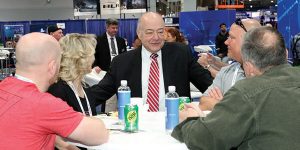 HAI President and CEO Matt Zuccaro shares a moment with exhibitors at the Exhibitor Reception in HAI Connect. Photo by Lagniappe Studio/HAI

Another sign of recovery across the industry is new life for aircraft that were victims of the downturn. Helicopters that were no longer needed when prices fell were reduced from operator inventory and in some cases even parked, creating surplus pressure on market. Some of these aircraft are now finding work, and others a whole new life.

“Even with the uptick in oil and gas, there is a lot of surplus on the market that will need to be utilized before we see a real increase in new aircraft sales,” says Fiatarone. “We’re seeing an increase in aircraft coming to Sikorsky and other manufacturers to be reconfigured for different missions. Folks are looking for ways to put these assets back to use, and there are a lot of them on the market right now.

“The truth is, the S-76 and S-92 love to be flown. We see considerable reliability increases when an aircraft flies 600-plus hours per year, or about 50 hours a month. With aircraft flying that much or more, it provides an impressive way to create value for the customer.”

At Leonardo, a partnership between the helicopter manufacturer and Waypoint Leasing and Eagle offers expired-lease aircraft a new life. Working with Eagle for the interiors, Waypoint is reconfiguring these aircraft for the utility market, with parapublic and electric utilities being the highest demand.

“The focus is to open the market to operators who may not have had the ability to utilize these aircraft before due to cost,” says Lyke McNee, commercial associate at Waypoint Leasing. “By leasing a used aircraft, completed to their needs, they can now expand their operations and abilities with a helicopter upgrade.”

At Airbus, however, surplus aircraft aren’t cause for concern. “Surplus aircraft seem to be mainly in the medium to heavy markets, but for the light twins it can be a benefit,” says Emerson. “What we’re seeing is former Enstrom and Robinson owners upgrading to used Airbus single-engine helicopters, which opens the door for them to become loyal Airbus customers, and later move to a new Airbus. In this instance, having surplus is a positive thing for our new aircraft sales.” 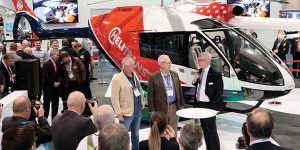 Kopter (formerly known as Marenco Swisshelicopter) revealed the prototype for its new SH09 on the show floor. Photo by Lagniappe Studio/HAI

While the overall outlook is positive, the recent downturn took its toll and left a mark that will define the future of the industry. Progressive companies are realigning services to match this new “normal” in hopes of maintaining market share and growth as the industry recovers.

“The recent downturn restructured the industry around tighter margins and more utilization,” says Nicolas Chabée, vice president of helicopter engine marketing and sales at Pratt & Whitney Canada. “The industry has adapted itself to this permanent cost reduction. Even as the industry recovers, this new mind-set will not change. We must strive to serve it with services aimed at helping to reduce costs and maintenance, while increasing aircraft availability and productivity.”

One clear sign of changing times was Bell’s big rebrand unveiled at HAI HELI‑EXPO (see that story on p. 22). “Based on interest, we’re feeling optimistic that 2018 will be an improvement over 2017,” says Evans. “At the same time, we see air taxi as a future growth market. We’re building around passenger experience, experimenting with how we can provide propulsion for this emerging market.”

As legacy manufacturers found new opportunities, Kopter, with its large-interior, single-engine SH09, made waves at the show with a slew of new orders and memorandums of agreement. The Swiss manu­facturer, formerly known as Marenco Swisshelicopter, also unveiled at the show a new HAA interior for the aircraft, highlighting the versatility of the new model, and announced plans to create a US subsidiary and begin production in the United States.

“There was a very clear need in the market for a large cockpit, versatile, single-engine helicopter,” says Christian Gras, executive vice president of Kopter Group AG. “The Kopter is a natural replacement for the Airbus H125 and H130, and the Bell 206 and 407. It flies 20 knots faster than the H130, allowing tour operators, for instance, to fly one more flight per day.”

Gras added the SH09 also flies circles around the competition in safety. “It is certified to 2014 safety standards, giving it a much higher crash resistance in fuel and fuselage, and offers safety features like dual hydraulics,” he says. “Together this offers the largest, safest HAA single-engine helicopter on the market.”

To build market share, manufacturers are continuing to innovate. Robinson turned heads with expanded offerings for both the R66 and R44 line of helicopters. Most notable was the company’s new R66 external-load modifications and cargo hook, capable of lifting up to 1,200 lbs., which opens the aircraft to the utility market.

Optional enhancements to the aircraft include left-seat operating approval, left-seat hydraulic switch and start button, a load weight gauge, and a second set of engine power gauges (torque and gas temperature) located by the left seat door, allowing the pilot to monitor engine operations while keeping an eye on the external load. The manufacturer also announced an approved wire-strike kit and cockpit video and data recorders.

Over at MD Helicopters, company president Lynn Tilton continued her call for innovations to decrease weight and increase mission effectiveness. Holding up her mobile phone during the press conference, she asked why it takes 150 pounds of equipment in the back of a helicopter to run a glass cockpit when we have the technology to hold a supercomputer in our hands.

“The success of every company comes down to innovation and evolution,” she said. “MD has been steeped in this philosophy, and we are committed to getting lighter.”

Overall, exhibitors and attendees left HAI HELI‑EXPO with optimism and a positive outlook for 2018. “There is a very bright light at the end of the tunnel,” says Roberto Garavaglia, Leonardo’s senior vice president of strategy and competitive positioning. “There is definitely life in the market. We are being prudent and cautiously optimistic, but it is an improvement. It’s one thing to expect the turnaround and another to see it start to happen.”