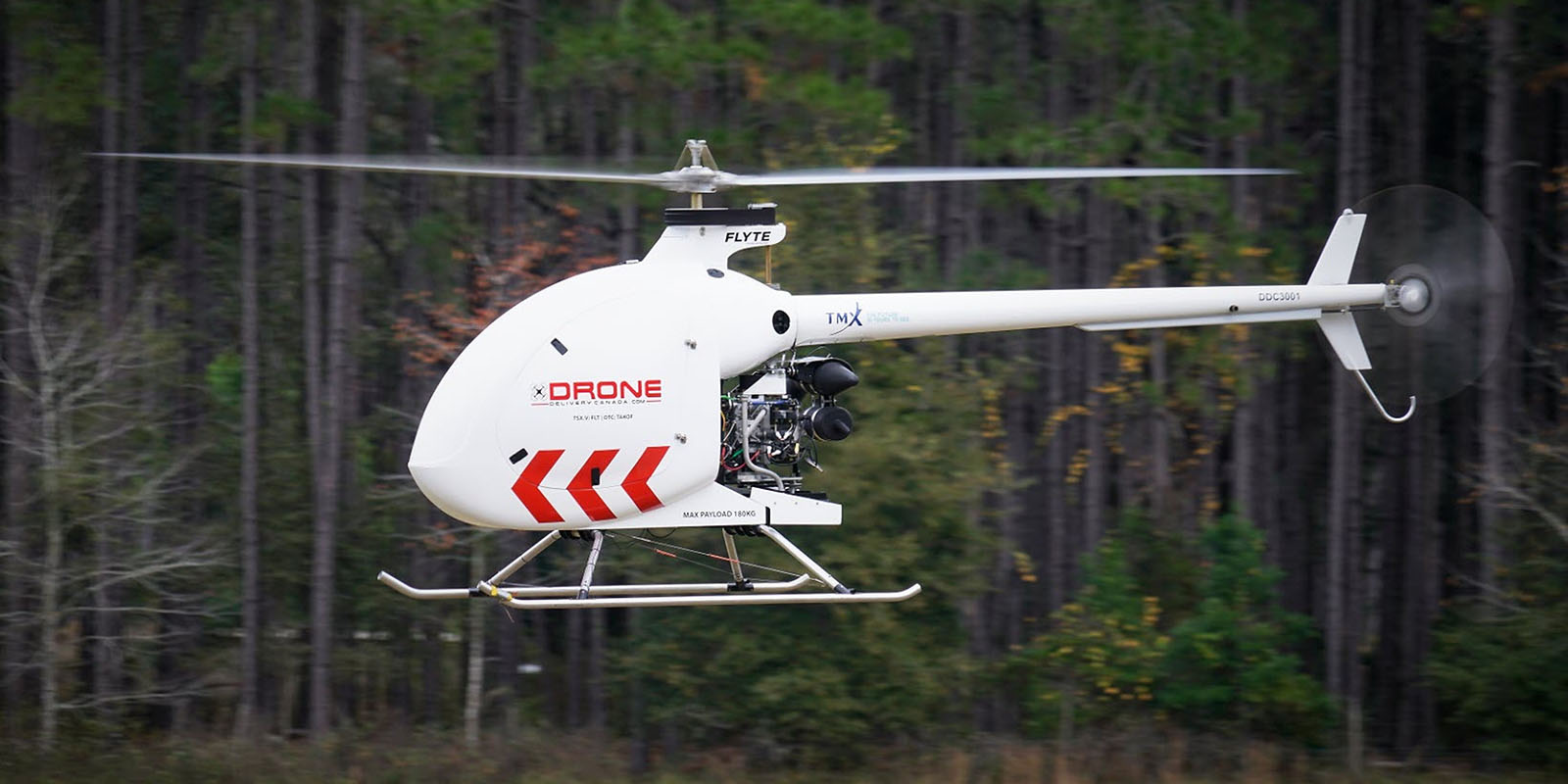 A Cargo Drone Is Inbound

By David HughesJanuary 18, 2022No Comments

The integration of unmanned aircraft systems (UASs) into the airspace—and, just like the Amazon van, into the routine of daily life—has taken another step forward. Drone Delivery Canada (DDC), a small public company with a market capitalization of C$181 million, has earned the first Compliant UAV Operator Special Flight Operations Certificate from Transport Canada. The designation entitles the company to conduct beyond-visual-line-of-sight (BVLOS) operations.

DDC has developed three UAS models. The largest is the autonomous, gasoline-powered Condor cargo drone, which weighs 1,050 lb. and can carry a 400-lb. payload. It can fly at speeds up to 75 miles per hour, with a range of up to 125 miles. The Condor is undergoing extensive flight testing in preparation for its first commercial use, and DDC has preorders for it.

The company’s smallest UAS, the 55-lb., eight-rotor Sparrow, can carry a 9-lb. load up to 18 miles at speeds up to 50 miles per hour. It is already in commercial service. Development and testing of the 176-lb., eight-rotor Robin XL has been put on hold while the company completes testing of the new parachute-equipped version of the Sparrow (named the Canary) and the Condor. Both the Sparrow and Robin XL are powered by lithium-ion batteries. 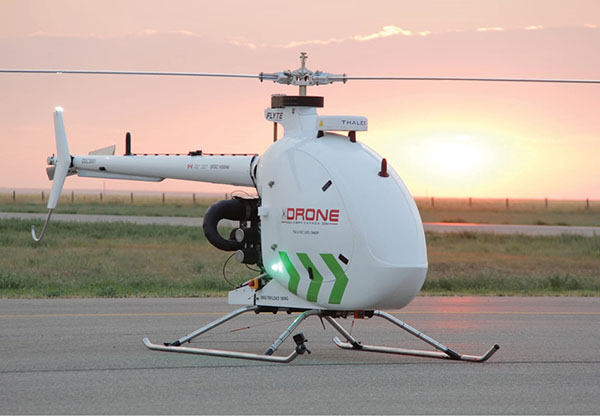 Even though DDC has developed three drones, the core of its product  line is a logistics hub, of which its drone fleet is only one component. That hub, the company’s patented FLYTE software platform, monitors air traffic, weather, obstacles, and other key flight parameters for its deliveries.

More than just an automated flight-tracking program, the cloud-based FLYTE platform also tracks all logistics related to the flight and cargo. It schedules deliveries, monitors shipments and waybills, tracks temperatures for sensitive cargo, runs maintenance logs, and can be integrated into a customer’s logistics software. The software is airframe agnostic and can be used with both crewed and uncrewed aircraft, including helicopters and UASs.

DDC monitors the drones from its NASA-like, 24/7 drone operational control center in Vaughan, Ontario, just north of Toronto. DDC owns the drones and infrastructure while providing FLYTE as a turnkey system that is sold as a managed service to customers. FLYTE has half a dozen customers so far and has been earning revenue for a year.

“FLYTE runs automatically, and we just monitor it,” says DDC President and CEO Michael Zahra, whose resume includes a bachelor’s degree in electrical engineering and a master’s degree in business administration. He also has 30 years of experience leading the Canadian operations of several companies, including Staples Business Advantage, Yahoo, and Schlumberger.

DDC drones operate autonomously on fixed routes to specific sites. Detect-and-avoid capability is provided at the drone landing sites by ground-based radar systems with about a 12-mile range. A human operator is alerted to take control if a conflict develops with other traffic. Meanwhile, DDC is developing a proprietary detect-and-avoid system.

“Today, there is really not a robust, inexpensive, lightweight, and proven detect-and-avoid system for onboard use for a drone like the Condor,” says Zahra. He notes that sensors that can spot an aircraft out to about 1.2 miles away don’t provide enough warning to avoid a fast-moving aircraft.

Other companies are working on onboard acoustic sensors, cameras, and radar, but Zahra doesn’t think these third-party solutions are sufficient. “You need to detect aircraft 10 miles or more away, and that tends to be a bit larger, heavier, and more expensive system, and that’s what we’re working on right now.”

The Sparrow and Robin XL are designed to fly into a boxlike structure or “drone spot” that the company places at departure and destination sites. The drones transition from GPS-guided navigation to optical guidance by locking onto a marker that looks like a bar code on the floor of the drone spot. The onboard optical sensor then allows the drone to make a precise landing without hitting any of the walls of the containerlike landing spot.

“We lock onto the bar code, and it’s a more secure way to land,” says Zahra.

The drone landing site is secure. Access is monitored by cameras, and the area is fenced to keep people and wild animals out. While people load and unload cargo in the drone spot, computers check the battery charge of the drone and monitor the weather. Bar-code scanners track packages being loaded onto or unloaded from the aircraft. The drone spot can even have a retractable roof, depending on customer requirements for high-value cargo.

“Our approach is to augment traditional cargo transportation where it makes more sense because of cost effectiveness and availability,” says Zahra, adding that his company’s drones can launch quickly, with no need to schedule a pilot. The company is in talks with oil-and-gas companies, mine operators, and large helicopter companies about using its logistics system and drones.

“Helicopter companies understand that we’re going to compete with them. Some realize they’ll be better off working with us instead of only seeing us as a competitor,” Zahra says. “So if you’re sending a helicopter and a pilot to do a delivery where you could have sent a drone, that’s a cost savings that could have been passed on to a mining, oil, or gas customer. If helicopter company A isn’t going to work with us, I guarantee you that helicopter company B will.” 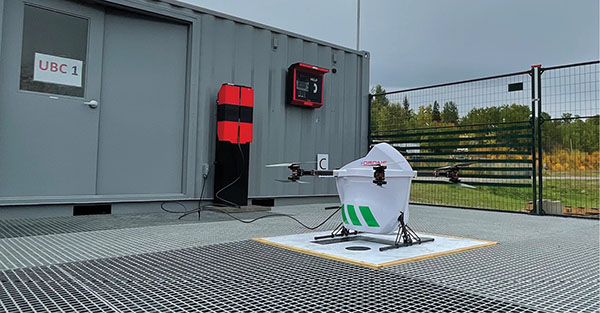 The Sparrow battery-powered drone operates on preprogrammed routes to and from drone spots such as this fenced-in area. It can carry up to 9-lb. payloads at speeds up to 50 miles per hour. The company’s logistics system tracks all packages. A Sparrow is now operating on a short route from Edmonton International Airport (CYEG). (Drone Delivery Canada photo)

DDC bought a shell airframe and motor for the Condor, while all of the electronics and software were developed in-house. To resolve concerns about the availability of aviation fuel in remote locations, the Condor uses automotive gasoline, and the choice of a piston engine means the powerplant is simple, reliable, and inexpensive to maintain.

The choice of a gasoline-powered engine for the Condor was a simple decision. “When we started working on the Condor a few years ago, there really wasn’t any battery or hydrogen fuel cell technology that was going to give us the range and payload capacity we needed,” says Zahra.

The Condor landing zone will be fenced to keep people and wild animals out of the area, but the cargo drone may land following a glide path rather than a direct vertical descent. And, just as with the Sparrow and Robin drones, it will use the FLYTE system to monitor loading and unloading.

Three Condor drones are flying, and one is being prepared for use in initial commercial service. The Condor’s first contract will be for deliveries to several communities on the North Shore of the Gulf of Saint Lawrence in Quebec, about 1,000 miles northwest of Montreal. A 10-year agreement with Drones Express of Quebec will enable BVLOS deliveries of parcels and mail to these communities. The drones will also serve the nearby, 3,000-square-mile Anticosti Island, where about 200 people live.

DDC has been working with Transport Canada on other projects, including approvals for BVLOS operations in remote regions. Earlier this year, the company was selected to be a member of the Canadian Drone Advisory Committee, represented by its VP of regulatory affairs, Mark Wuennenberg. A pilot who served 33 years with the Royal Canadian Air Force, Wuennenberg also worked on many UAS initiatives at Transport Canada and helped develop the agency’s UAS regulatory framework.

One project DDC is developing is defined-route drone deliveries from Edmonton International Airport (CYEG) to the Nisku Industrial Park 2.4 miles away. DDC is partnering with the airport, Air Canada Cargo, Toronto-based Apple Express Courier, and Zing Final Mile to provide deliveries using DDC aircraft and drone zones. The Sparrow completed its first flight from CYEG on Dec. 3 under Nav Canada approval, with other routes to be added later along with flights by the Robin XL and the Condor.

DDC is also working on several projects involving Sparrow drones to carry cargo to remote First Nation communities in Canada, many of which have been in lockdown to reduce COVID-19 transmission. The autonomous deliveries have proven to be particularly valuable for isolated communities that need health-care supplies during the pandemic, as the deliveries involve no person-to-person contact.

Sparrow drone flights have, for example, started between the Village of Fraser Lake and the Stellat’en First Nation, about 2.4 miles away. This contract was signed with the University of British Columbia (UBC) and the Stellat’en First Nation as part of UBC’s remote community initiative. With the ongoing COVID-19 pandemic, drone deliveries “will help address inequities in the access to health-care supplies and services,” says Dr. Michael Allard, vice dean of health engagement on the UBC Faculty of Medicine.

In another project, DDC is working with the University of Toronto Institute for Aerospace Studies and Ford Motor Co. to test an autonomous drone’s ability to track and land on a moving vehicle.

The goal is to achieve repeated landings on a moving vehicle while maintaining the drone’s position relative to the vehicle to within about 4 in.—even as the vehicle changes speeds.

DDC is also exploring military and security applications for its drones and logistics services.

In August, the company signed a two-year agreement with Nexeya Canada (a Hensoldt company) to jointly explore developing products for civil and military use. Hensoldt provides systems and sensors for air, land, and sea platforms for military and security missions including helicopters, fixed-wing aircraft, UASs, ships, submarines, armored vehicles, and satellites.

David Hughes has been writing about aviation for 40 years. As a US Air Force Reserve pilot, he flew the C-5 and C-141 and logged 20 years writing and editing at Aviation Week & Space Technology magazine. He then joined the FAA to write about NextGen and today is a freelance writer.