Coming Back Home to Aviation 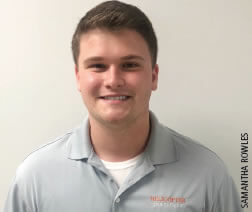 Austin Rowles has been around aviation professionals practically his entire life. When he was very young, his father started a flight school called Palm Beach Helicopters.

“My family rode out three hurricanes [in Palm Beach County, Florida], and after one of those hurricanes destroyed the office, we rebuilt there. Every major event that has occurred in my life has been in some way, shape, or form caused by aviation.”

After high school, Rowles decided to major in computer science. Though his love of computers still runs deep, after a year of study in that field he decided to come back to his roots and pursue his other passion, aviation.

“A combination of watching my father pour his blood, sweat, and tears into this industry, and seeing my brother’s father-in-law work as a maintenance technician drove me to come back home.”

Rowles applied for and won a 2018 HFI Maintenance Technician Certificate Scholarship. He is working on his airframe and powerplant certifications and will finish his private pilot rating this summer. In addition, he has been working with his brother’s father-in-law at his shop on Meacham Airfield in Fort Worth, Texas. Rowles has done everything from a full four-phase inspection of a King Air C90 to fabricating instrument panels for multiple Cessna models.

“This industry revolves around a single word: networking.”

Rowles’s ultimate career goal is to eventually run his own Part 147 school that concentrates on the rotorcraft side of the aviation industry. “I believe rotorcraft are heavily neglected in our current schools, and I hope to be a driving force to fix that.”

When asked what advice he would give others considering a career in aviation, Rowles says, “This industry revolves around a single word: networking. Skill is always important — you should always strive to be the best at whatever it is you want to do — but when you’re shooting for that director of maintenance position at that popular company you’ve always wanted to work for, it helps to know the right people.

“Go to as many meet-ups as you can. Write names down and never forget a face. There are so many wonderful people in this industry, so it’s a pleasure just getting to know everyone.”

Allison McKay joined Helicopter Foundation International as vice president in 2015, where she focuses on programs that create a sustainable workforce, improve helicopter safety, and preserve industry history. Allison worked in marketing for aircraft OEMs before moving to charitable development.