By Rotor DailyJanuary 12, 2023No Comments 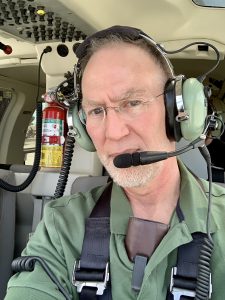 S International CEO and Chief Engineer Eric Bechhoefer is the 2023 recipient of the Salute to Excellence Safety Award. The award, sponsored by BLR Aerospace, recognizes an individual for outstanding contributions in promoting rotorcraft safety and safety awareness. It will be presented on Mar. 6, 2023, at HAI HELI-EXPO 2023 in Atlanta, Georgia.

Eric Bechhoefer changed the playing field for aircraft safety with the helicopter health and usage monitoring system (HUMS) for single-engine helicopters. After retiring from his career as a naval flight officer, he pursued a PhD in engineering with an interest in advancing aviation safety. During his tenure at Goodrich Sensor Systems in the 2000s, he saw his dream become a reality.

While at Goodrich, he helped pioneer the first-generation HUMS and condition-based maintenance systems, which the company designed for the UH-60 Black Hawk, CH-47 Chinook, and S-92.

“It was great work, but I really felt if anyone needs these systems, it’s the smaller operators with light aircraft and single engines,” he explains. “I wanted to design a lighter, much less expensive solution for smaller operators with those aircraft that don’t have the assets and finances for the current HUMS programs. I wanted to give them the same level of safety and protection the big guys get and be able to easily add functions as users identify their needs.”

Bechhoefer began to design an idea, leaving Goodrich in 2010 to work at a wind turbine company where he was tasked with developing a sort of HUMS for wind turbines. There, without the regulatory oversight of aviation, he was able to rapidly design and test prototypes for the turbines, which themselves break down regularly. After three years of development, he had a product design that could work with light helicopters. He copublished and presented in 2012 a white paper arguing for improving HUMS for the light-helicopter market and went to work on the application.

In 2013, he cofounded Green Power Monitoring Systems (GPMS) International to bring his vision to reality. In 2018, the company launched its first product, a lightweight, affordable, next-gen HUMS solution applicable to all helicopters regardless of make, model, or mission. He has since overseen the design, certification, and sale of HUMSs for many helicopter models, including the Airbus AS350; Bell 212, 407, 412, and 429; Mil Mi-8, Mi-17, and Mi-171; and MD 530F.

An active industry champion for the HUMS, Bechhoefer continues to promote the benefits of today’s advanced HUMS and condition-based monitoring and maintenance. He is a founder and fellow at the Prognostics and Health Management Society, a fellow of the Society for Machinery Failure Prevention Technology, and a senior member of the Institute of Electrical and Electronics Engineers. He also sits on the Vertical Flight Society’s HUMS Committee and the SAE Aerospace HM-1 Committee covering integrated vehicle health management.

“Dr. Bechhoefer’s contribution to rotorcraft operational and maintenance safety simply stands above all others,” says Garmin International Senior Systems Engineer Brent Butterworth. “Through his research and development, he has taken a system only large helicopters and fleet operators could utilize to one where all sizes and budgets of Part 27 or 29 aircraft can reap the benefits of health monitoring. This has had a radical impact on the knowledge, awareness, and understanding of how the operation of an aircraft affects the health of the aircraft.”

Bechhoefer continues to research and innovate. His industry contributions include 34 patents and more than 150 papers on condition-based maintenance, diagnostics, and prognostics of rotating equipment.

The Safety Award will be presented during HAI HELI-EXPO 2023. HAI HELI-EXPO®, the world’s largest helicopter trade show and exhibition, will be held at the Georgia World Congress Center in Atlanta, Georgia, Mar. 6–9, with the exhibit hall open Mar. 7–9. For more information on HAI HELI-EXPO 2023, visit heliexpo.com.