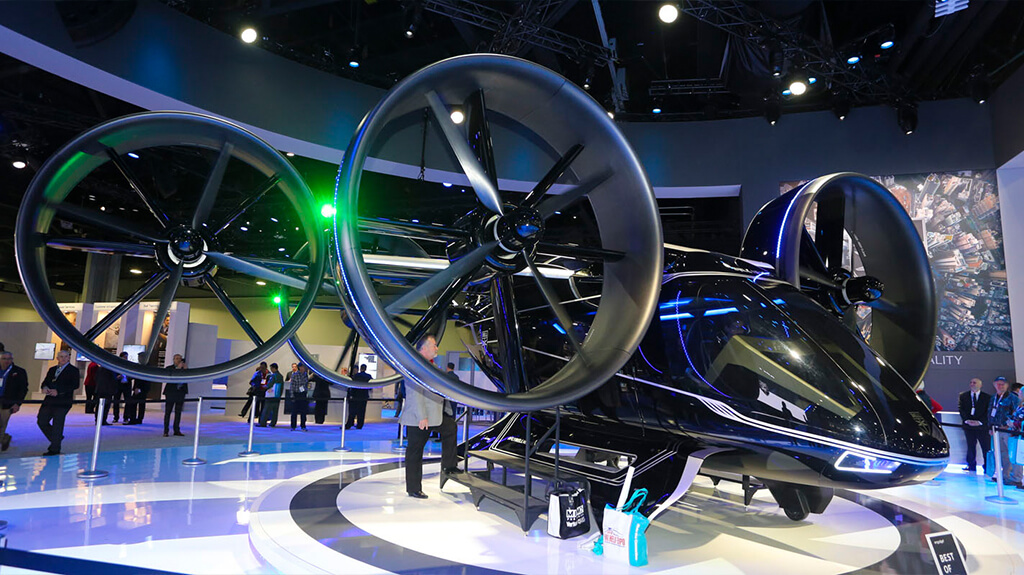 What you need to know about the “future of vertical flight.”

The newest player in transportation technology is the electric vertical takeoff and landing (eVTOL) aircraft and its projected use for air taxis and urban air mobility (UAM).

At HAI HELI-EXPO 2019 in Atlanta, eVTOL appeared in everything from panel discussions and education sessions to prototypes on the show floor. One panel discussion, The Electric VTOL Revolution, hosted by the Vertical Flight Society, brought together leaders in eVTOL to discuss where the industry stands now and where it’s headed in the future.

Why eVTOL and UAM?

eVTOL describes any type of aircraft that takes off and lands vertically using electric or hybrid-electric propulsion. This covers everything from ultralights and personal air vehicles to future air-taxi models such as the Bell Nexus.

eVTOLs could be used in many missions that helicopters already do, from package delivery to disaster relief. But eVTOL designers and manufacturers point to the technology’s advantages over traditional aircraft: eVTOLs could be more cost-efficient to operate and could carry increased payloads, all while reducing noise.

UAM is only one future application for those vehicles. Like most new technologies, UAM is being developed to solve a problem: “If I live in a city with impossible automobile traffic that can’t support more ground transportation infrastructure, can I bring my daily commute to the sky to get around quickly and efficiently?”

“eVTOL has exciting potential that we think will revolutionize not only vertical flight, but society as a whole,” says Mike Hirschberg, executive director of the Vertical Flight Society. “We have been examining the potential for eVTOL for six years, and it’s not a matter of if it’s going to happen—it’s a matter of when.”

Hirschberg explains that the time to explore and embrace this technology is now. “We are currently experiencing huge advances in electric motors and batteries, as well as the modernization of design tools, computer simulation of fuselages, and all aspects of flight control that we didn’t have five to 10 years ago,” says Hirschberg. “There has even been discussion about moving to performance-based regulations and certification for aircraft, which would be a major game changer.”

“We think about the question of ‘why now?’ a lot at Bell,” says Scott Drennan, vice president of Bell’s innovation team. “We see this as market demand and technology coming together at the same time.” 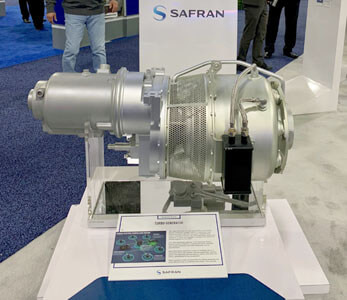 Safran is developing a Hybrid-Electric Propulsion System (HEPS) to power Bell’s Nexus. The turbo-generator uses a gas turbine and generator to produce energy, some of which is stored in batteries. In flight, energy provided by the turbo-generator and/or the batteries is distributed to multiple electric motors that drive rotors to provide lift. Photo by HAI/Robb Cohen Photography

The Vertical Flight Society isn’t the only organization planning for an eVTOL future. Over the last few years, several large OEMs have announced their intentions to produce eVTOL aircraft for the UAM market.

“The future of transport is vertical,” says Zach Lovering, vice president of UAM systems at Airbus. The OEM and its R&D arm, A3, are working on eVTOL and UAM projects, including Voom, an on-demand helicopter taxi service currently operating in São Paulo, Brazil, and Mexico City. The company hopes to use the experience learned from Voom in its transition to eVTOL air taxis.

The Airbus eVTOL concept, CityAirbus, completed ground tests in 2017. Airbus hopes to fly the four-seat design by June of this year.

The Bell Nexus, Bell’s air-taxi prototype, will use hybrid-electric propulsion to create a flight range of about 150 miles at a cruise speed of 150 miles per hour. “Our initial vehicle will be completely autonomous, but keeping in mind certification and customer acceptance, we believe we’ll need a manned version to enter the market,” says Drennan.

A mockup of the Nexus aircraft was a prominent feature at the Bell booth in Atlanta. Bell is also developing autonomous pod transport vehicles for delivering goods to distribution centers or hubs.

From Concept to Reality

There has been a lot of hype surrounding eVTOL, with some companies announcing plans ambitious in timeline and scope, such as Uber’s projected UAM service by 2023 at a cost of $6 per mile. Even eVTOL supporters agree that many of the details remain to be worked out.

“Hype is good, to a certain extent,” says Hirschberg. “It can get people excited and attract a lot of attention. But we need to address the challenges realistically. All this money and innovation that is coming into the aerospace industry from the outside is great, but we need to look at this frankly.”

Infrastructure is one of the biggest considerations moving forward. “Bell’s vision of on-demand mobility means we’d like to move people, things, and data from point A to point B as the customer demands,” says Drennan. “To do that, we need to go beyond just being an OEM and service provider to those vehicles. We need to think about things like operational models and infrastructure and pull them under one umbrella to succeed.”

Airbus also acknowledges the need for strategic planning. “To build a UAM system, you need a lot more than just aircraft,” says Lovering. “We need support and services, we have to deal with supply chain issues, and we need flight operations and air traffic management solutions.”

The aviation industry is no stranger to innovation. With the right tools and the right planning, eVTOL and UAM could become trusted aviation technologies.