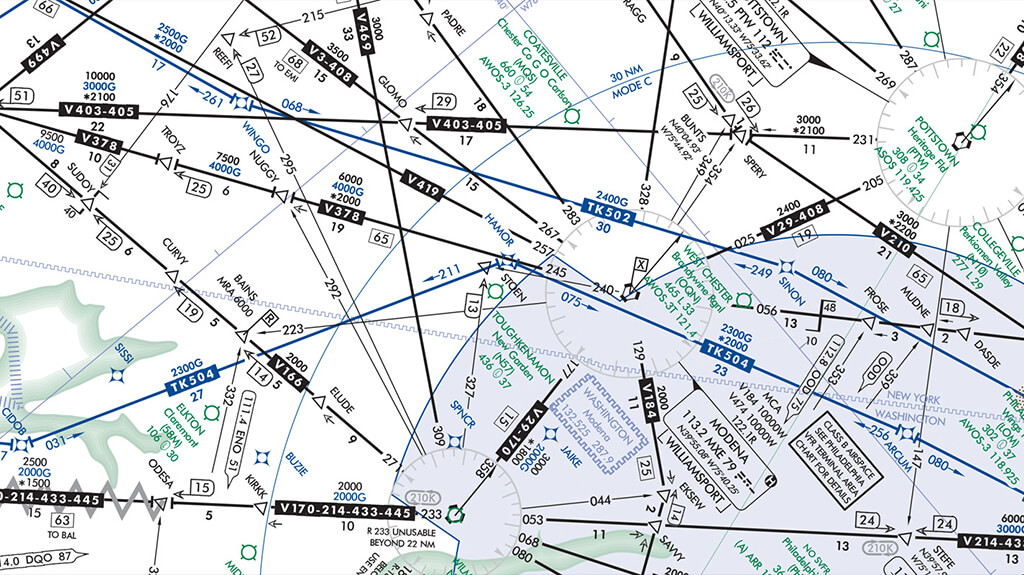 IFR helicopter-only routes are available now in some areas.

The rate of fatal helicopter accidents usually rises in the fall each year, according to the US Helicopter Safety Team. This is typically because of visibility issues that increase the risk of accidents such as controlled flight into terrain or running into a tower or power line while diverting around weather (bit.ly/BumpInRoad).

Today’s technologically advanced aircraft are increasingly being equipped and certificated to fly under instrument flight rules (IFR). When pilots have their IFR rating and are competent and confident in their IFR skills, filing and flying IFR allows them to safely operate in lower weather minimums.

The resulting increased number of completed flights will also deliver financial benefits to helicopter operators. For example, a September 2000 review by the National Library of Medicine reported that a helicopter air ambulance (HAA) operator missed an average of 24% of flights during a six-year period because of poor visibility and low clouds, conditions in which IFR-capable helicopters could fly. Analysis of that operator’s expenses and revenue suggested that converting a helicopter from visual flight rules (VFR) to IFR, which would require equipment purchases and additional pilot training, would have been “economically feasible given the potential revenue gained by the number of flights completed during marginal weather conditions” (bit.ly/WhyIFRAir).

In the days before electronic flight bags (EFB), pilots were required to lay out IFR charts and approach plates in the FBO. They would sometimes spend an inordinate amount of time on the phone talking with the FAA in order to receive a weather brief and file an IFR flight plan. The ease of filing IFR has increased exponentially since the inception of EFBs, enabling pilots to use any number of sources, such as FlyQ, Garmin Pilot, or ForeFlight, to quickly obtain weather and file.

Operating helicopters under IFR decreases risk and increases safety for many reasons, but issues still remain. Because IFR flights have higher minimum altitudes than VFR ones, operators and pilots must mitigate some additional risks. Most helicopters lack de-icing capability and pressurized cabins, and the aerodynamics of rotary-wing flight result in decreased performance as altitude increases. Helicopters also have to compete for airspace with fixed-wing traffic at higher altitudes.

For these reasons, the FAA and ICAO are designing and implementing IFR routes for helicopters that start as low as 1,200 feet above ground level (agl). These routes, labeled as TK on IFR sectionals, are intended to enhance safety and improve the efficient use of the navigable airspace for en route IFR helicopter operations (bit.ly/RNAVNortheast).

In March 2006, HAI requested that the FAA develop and chart IFR-required navigation (RNAV) airways for use by helicopters with IFR-approved GPS equipment. This included the use of RNAV to assist IFR helicopter pilots transiting through busy terminal airspace areas while providing routes separate from fixed-wing traffic.

The FAA defines the use of TK routes where the RNAV specification is 2 nautical miles (nm), but it has also determined that helicopter-only routes with a required navigation performance (RNP) of 0.3 nm may be developed to support en route point-based navigation helicopter operations. For example, a performance value of RNP 0.3 ensures that the aircraft has the capability of remaining within 0.3 nm of the right or left side of the centerline 95% of the time (bit.ly/PBNInstrument).

Most people are unaware of the fact that two helicopter TK routes now exist in the northeast United States, between Washington, D.C., and New York City. They’re used mostly by HAA operators using IFR-equipped and certificated helicopters. Unfortunately, the number of daily helicopter operations is low, with the FAA estimating fewer than 50 helicopter operations on the routes per month.

Advances in helicopter GPS and Wide Area Augmentation System (WAAS) avionics technology are enabling instrument approach procedures (IAP) to US heliports, and operating helicopters under IFR increases their utility and safety. Per the FAA, “helicopter IFR operators have an excellent safety record due to the investment in IFR-equipped helicopters, development of IAPs, and IFR-trained flight crews” (bit.ly/FAAInstrument).

Matt Callan is HAI’s director of regulations and international affairs. He is also the IFHA’s nominated member to ICAO. Matt retired from the US Coast Guard in 2017 with more than 31 years as an officer and helicopter pilot, flying more than 5,800 mishap-free flight hours in six different aircraft.