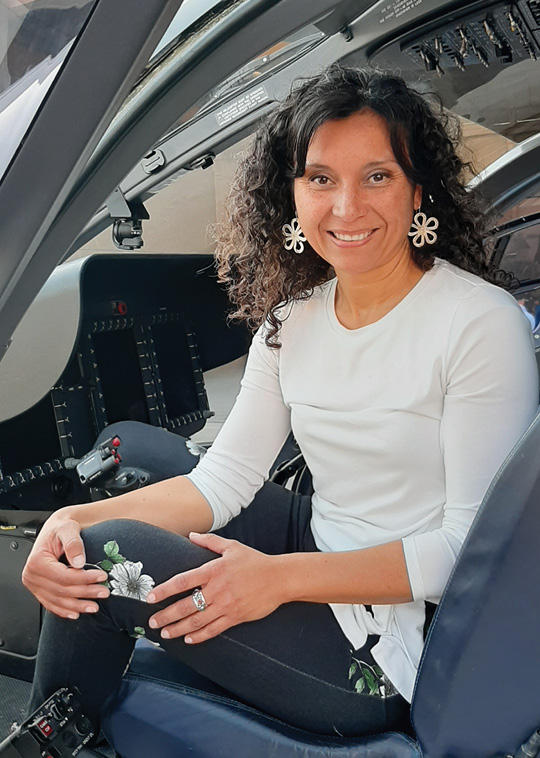 First Aviation Job: My first job was advising on the legal setup of a helicopter operating company, which today is the largest operator in the Chilean market. It was a good experience because, unlike the airlines, it involved working in a small, highly innovative company, carrying out very interesting flights for large local industries (such as mining and forestry) that needed very specialized services.

Favorite Helicopter: I really like the Airbus H130 because it mixes the efficiency of the H125 with a higher level of design that not only makes it more beautiful but also allows a panoramic view for its passengers, among whom I count myself because I’m not a pilot (yet!).

In my law practice, for many years I worked in aviation insurance and in forming operating companies. The versatile, technological aviation industry immediately charmed me. But in the helicopter subsector, I saw a kind of contradiction between its public relevance and its almost null visibility before the sectoral authorities and the public. That limited the industry’s development in a country like Chile, where our geography and natural catastrophes cry out for air services of this type. That scenario was a challenge.

How did you get to your present position?

When I was a member of the Chilean Helicopter Association, before I became president I got to know the world of operators and stakeholders more in depth and grew to share many of their convictions. I think that’s why they entrusted me with the presidency. I think they needed a leader who was more political than technical because, although the association was doing a lot of good work, the organization was very self-absorbed and needed to be open to new issues and take a longer-term view. The group also needed to define its strategies, gain stature and visibility before the authorities, and connect with other national and international organizations. It needed to be publicly recognized and to earn its place in the aviation sector.

As a lawyer, my goal is to assist my clients by understanding their business and empathizing with their needs. As an association president, I want to develop plans that strengthen the aerospace industry in Chile, where it faces great challenges, including the arrival of a new generation of aircraft and business models associated with eVTOL; sustainability; and the biggest challenge currently affecting Chile—safety. We need to achieve cultural changes at a personal and organizational level because we have unacceptable accident rates.

What advice would you give someone pursuing your career path?

Lawyers in general work very quietly at their desks and often see the industries they work for from a theoretical perspective alone. Well, in aviation, that doesn’t work. You have to go out and get involved, learn what the operation is really like, the processes, the risks, and all the factors surrounding the activity. After doing all that, then you can really contribute as a legal advisor and pretend to lead.

For many years, our executive secretary in the Chilean Helicopter Association was José Miguel Infante, a naval pilot and a pioneering Chilean helicopter operator who passed away five years ago.
José worked tirelessly for this industry and was a very committed, simple, authentic person. His death really affected this organization, but we moved forward inspired by his example.

Tell us about your first helicopter ride.

I was invited to the inaugural flight of a new helicopter being delivered to a client in the Los Andes mountains surrounding Santiago. The skies were very clear and the snowy mountains unforgettable. The helicopter had several technical innovations that were tested on the flight, which made the experience especially entertaining. It wasn’t just a ride but also a display of the potential of a great machine.

That it is vital to society. Helicopters help save lives and take care of people on a daily basis by carrying out aerial work in places that have very limited access and that are characterized by difficult climates. So it’s very important to take care of the organizations, the people, and the aircraft behind such operations. I also think the way aviation is evolving is very exciting. In the future, eVTOL technology will be massively integrated into daily life in terms of transporting cargo and people within cities. Preparing for this eventuality is very stimulating.

Preparing Chile to be part of the eVTOL revolution, not only as operators but also in developing a local chain of suppliers of goods and services, and building up Chile as a market that can provide technology developers worldwide.

Helicopter aviation is an activity with implicit risks, but we’re not doomed to have fatal accidents. We must be convinced about this once and for all.

How did you know you chose the right career?

As an aviation lawyer, I feel a lot of satisfaction when I’m able to broker agreements that enable the acquisition of helicopter fleets that are used for important aerial work for my country. And as president of the Chilean Helicopter Association, I know I chose the right career every time we contribute to society, like two years ago when, during the pandemic, our members donated flight hours to distribute vaccines.

Complete this sentence: I love my job, except when …

… bureaucracy hinders the progress of projects or when I’m trying to execute a project alone or a member asks me to do something that’s in their personal interest or requests something in exchange for their support. In Chile, association executives are financially uncompensated, so ­collaboration is essential.