By ROTOR StaffMarch 8, 2022No Comments 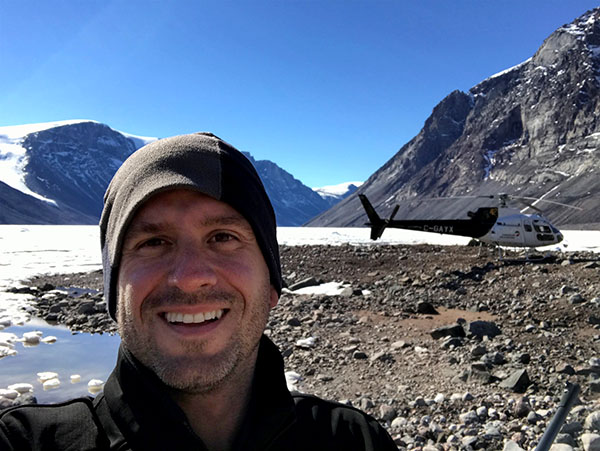 First Aviation Job: My first job was at Héli‑Tremblant with Jean‑Benoit Daigneault, president of the company and a pilot. He gave me my first chance to increase my hours, in an R44. My first real aerial-work position was with François Ricard, director of flight operations east at Canadian Helicopters Ltd., as a bush pilot.

Favorite Helicopter: My favorite helicopter to fly and handle is the AStar, but the Bell 212 has a special place in my heart because, growing up, I would always see the 212 on TV.

Since the first time I saw helicopter EMS operations in Saint-Étienne, France, where I was born, I realized helicopters can do what airplanes can’t. But it was too expensive a vocation to pursue in France, so I gave up for a while.

Ten years later, as an engineer with the French army, I met a civilian pilot in Kandahar, Afghanistan, where the United States subcontracted Canadian helicopters for sling work. He told me about an affordable Canadian training school as well as some promising job opportunities. Four months later, I got a Canadian visa and left everything behind. I was in Canada, living my dream.

My career goal is helicopter hoist operations and search-and-rescue work in the mountains. But for now, I’m continuing to evolve in my mountain-operations experience and fostering the type of mentality needed for longlining in this rugged environment.

Never give up. Stay diligent and humble.

When I started in the industry, my chief pilot with Canadian Helicopters, Stacy Lamoureux, inspired me with his rigor and precision. I remember him saying, “62 knots isn’t 65!” He was so fair, and good; I thank him so much for that.

My training pilot, Dominique Deschamps, taught me aerial work; pilot Denis-Claude Imbeau showed me how to sling; and, of course, Michel Côté, chief base engineer at Canadian Helicopters, who, though not a helicopter pilot, helped me so much while I was training in the bush.

In my current company, Groupe SAF, Alain Mermoud is a training-pilot legend in mountain rescue. The company’s senior pilots are also a continual source of inspiration to me.

I’d like to thank all the people I’ve met along the way in the industry who’ve offered their advice—those discussions over coffee are so important. And I’d like to extend my gratitude mostly to the engineers—all those who work hard to make aviation safer.

Tell us about your most memorable helicopter ride.

As a bush pilot, my most memorable flight was my first drill move in the Arctic. In longlining, disassembling a drill piece by piece and assembling it somewhere else is a huge step for a pilot.

On this particular morning, I wasn’t expecting to do the drill move; I was just the second pilot on that contract. But when the other pilot got sick, I was asked to replace him. With the first pilot’s advice in my head, and the sympathy of the drillers, and with my own patience—and some nervousness—I succeeded.

A 24-minute drill [like that one] seems as long as a full day! It was an amazing moment that helped develop my career as a sling pilot.

Flying in the mountains is always a challenge, even if it is really beautiful. I’m never satisfied with my precision.

The precision required, day in and day out.

The drone industry? LOL! For real, the routine and procedures that are so essential to our safety can also lead to complacency precisely because they are so routine.

Complete this sentence: I love my job, but I’d rather work for a paper company in Scranton when …

… the plans keep changing. You stay one night in a hotel. “Oh no, come back … no, stay! No, come back!” But that’s the helicopter life; [so much] depends on the client’s orders and what the weather permits.