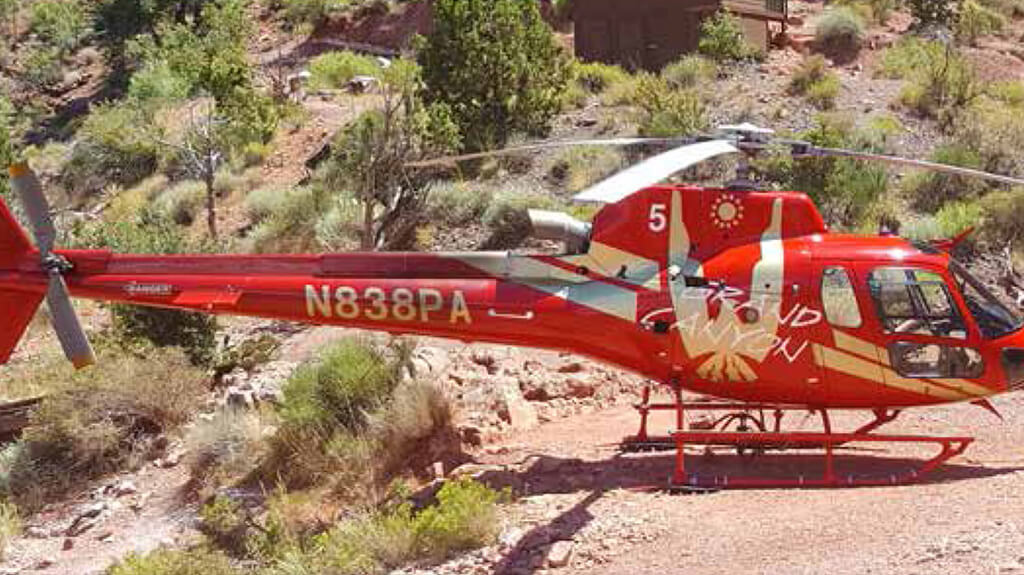 Flying in the Grand Canyon: A Dream Job with Unique Challenges

The helitack team at Grand Canyon National Park has to be prepared for anything. With weather conditions ranging from sun and 125-degree heat, to snow, wind, and dust, it takes more than just skill to operate in the canyon — it takes hard work and dedication. The combination of weather, remote terrain, and canyon flying requires advanced mountain flying skills.

The helitack team is drawn from Grand Canyon National Park staff and employees at Papillon Airways, working under contract with the park. Its MD 900 is on 365 days per year, while an AS350 comes on May 1 to add fire season support for about 90 to 150 days per year.

The helitack team performs a variety of missions inside the park during daylight hours. What started as park maintenance support in 1972 has expanded to firefighting, search and rescue, and utility work. The team also helps support management of threatened and endangered species by flying in personnel and equipment for research management, and even animals when appropriate.

With only a small staff available for any given mission (there are four employees on staff in the winter, and six more are added in the summer for the fire season), it’s not uncommon for the team to get pulled in many different directions. “We’ll be working on a pipeline break and literally switch hats and do a medical mission or respond to a fire, or even all three in one day,” says Eric C. Graff, Grand Canyon Flight Crew helicopter program manager.

From Leaky Pipes to Stranded Boats

One of the biggest projects in the National Park Service maintenance workload is managing the Trans-Canyon Pipeline, a 50-year-old system that pumps water to the rims of the canyon, where water is scarce. The 15 miles of 8-inch pipe breaks between five and 30 times per year, according to the National Park Service. The helitack team helps respond to each break, in addition to supporting regular maintenance on the pipeline. “We spend a good portion of our time moving people, pipes, and gear for those projects,” says Graff.

Access to the canyon can be tricky because of terrain. But strategically placed helispots ensure the team can get where they need to go.

There are a lot of established helispots for both helicopters, says Graff. Not only are there many helispots along the Trans-Canyon Pipeline for access to things like control valves, but every major ranger station within the main corridor of the canyon also has a place for us to land.

Rafting is a popular sport in the canyon, but fluctuating tides and a rocky floor can sometimes lead to rafting accidents and injuries. “Of the 161 medevacs performed within the park during the last year, 30 to 40 percent of them were on the river,” says Graff.

Medevac missions are also common in the park. Typical injuries that require medevac include broken or sprained ankles or knees — injuries that prevent hikers from being able to complete their hikes and exit the park safely.

Heat exhaustion and dehydration are also major worries. The canyon features both extreme temperatures and minimal access to water. The park ranger staff often performs what they call preventive search-and-rescue, which includes leading people back toward correct trails when they have wandered too far off course, or taking them to shaded areas when they are at risk of overheating. The helitack team responds to these calls when the rangers are not able to solve the issues.

This makes river-access helispots essential to their operations. “River tour companies know the common spots they can pull over where a helicopter can get to them in an emergency,” says Heather Saur, who pilots both the MD 900 and the AS350. “But those spots can change throughout the year as the terrain changes, such as bushes growing or tide erosion. Rafters or hikers will also rearrange rocks if they stop to rest, so one spot that may have been clear yesterday might not be clear today.”

But the team doesn’t just rescue people — sometimes they rescue the boats themselves. One recent mission involved removing a 22-foot boat that had gotten stuck on a large rock in the middle of the river. “We had to short-haul the people off the boat and remove gear to reduce the weight on the boat to allow it to become more buoyant, then wait for the tides to change through the output of the dams,” says Graff. 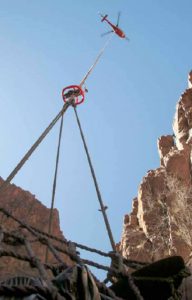 The AS350 hauls a long-line sling of construction material. Photo by Bryan Struble

Operating in such a varied environment has its challenges. “The geography and terrain of the canyon changes our environment every minute of every day,” says Graff.

“Even though it’s blowing 40 knots later today, there might be areas where it’s dead calm in the canyon. Or it could be 125 degrees at Phantom Ranch but only 80 degrees on the South Rim, so you have a degree change that is very unique. And then you could still have 4 to 5 feet of snow at the North Rim and nothing at the South Rim. Varied climate is a big challenge for us.” The extreme heat can make operations so difficult that sometimes the AS350 needs to be shut down because of overheating concerns.

The use of unmanned aircraft systems (UAS) has grown across the country, including inside the park. While visitors are not allowed to fly drones recreationally inside the park, the National Park Service uses UAS to supplement its missions. Being at the forefront of this technology has been useful and exciting for the helitack team. Started about three years ago, the park’s drone program now has six 3DR Solo UAS that are mainly used for search and rescue and fire support.

When they’re not flying, the staff manages a helitack training academy offered through the National Park Service for interagency partners. Now in its 19th year, the program starts with the basics and trains participants to be working helitack crew members. Each session is two weeks long and trains two people at a time, with six to eight sessions per summer. More than 400 students have completed the program and learned the basics of helicopter crewing, managing an aircraft, and even helibase management.

The helitack team considers themselves lucky to have the opportunity to fly in such a unique area of the country. Because of the remote location, pilot turnover can be frequent. But the team embraces those challenges. “I really enjoy utility work, and short-hauls are a lot of fun,” says Saur. “The diversity of this job is so cool — we can do anything from medevac to Bambi Buckets or park support. Every day is different.”

Saur was hired by Papillon Airways at HAI HELI‑EXPO 2010 in Houston. She worked her way through the program to complete her utility training and landed her current gig with the National Park Service in 2015, a coveted position that is only filled by internal candidates. As of March 2018, she had nearly 5,000 flight hours in the canyon.

Everyone on the helitack staff has a wildland firefighting background that led them to aviation. In addition, 40 percent of the staff are female. “This is a huge benefit because it provides us with a new perspective. It allows us to think of new ways to do things so we’re constantly improving,” says Graff.

“People get really excited when you land a helicopter and an all-female crew gets out,” says Saur. “It’s really empowering for people to see that.”

In 2009, Grand Canyon National Park Helitack and Papillion Grand Canyon Helicopters received HAI’s Igor Sikorsky Award for Humanitarian Service “for outstanding service, demonstrating the value of helicopters to society through the saving of life, protection of property, and amelioration of distress.”

The team has helped many people over the years, and some even show their gratitude by sending thank-you cards or visiting. “One man we rescued still stops by to say hi and thank us every year on the anniversary of his rescue,” says Graff. “It is very rewarding to know you have made a difference.”