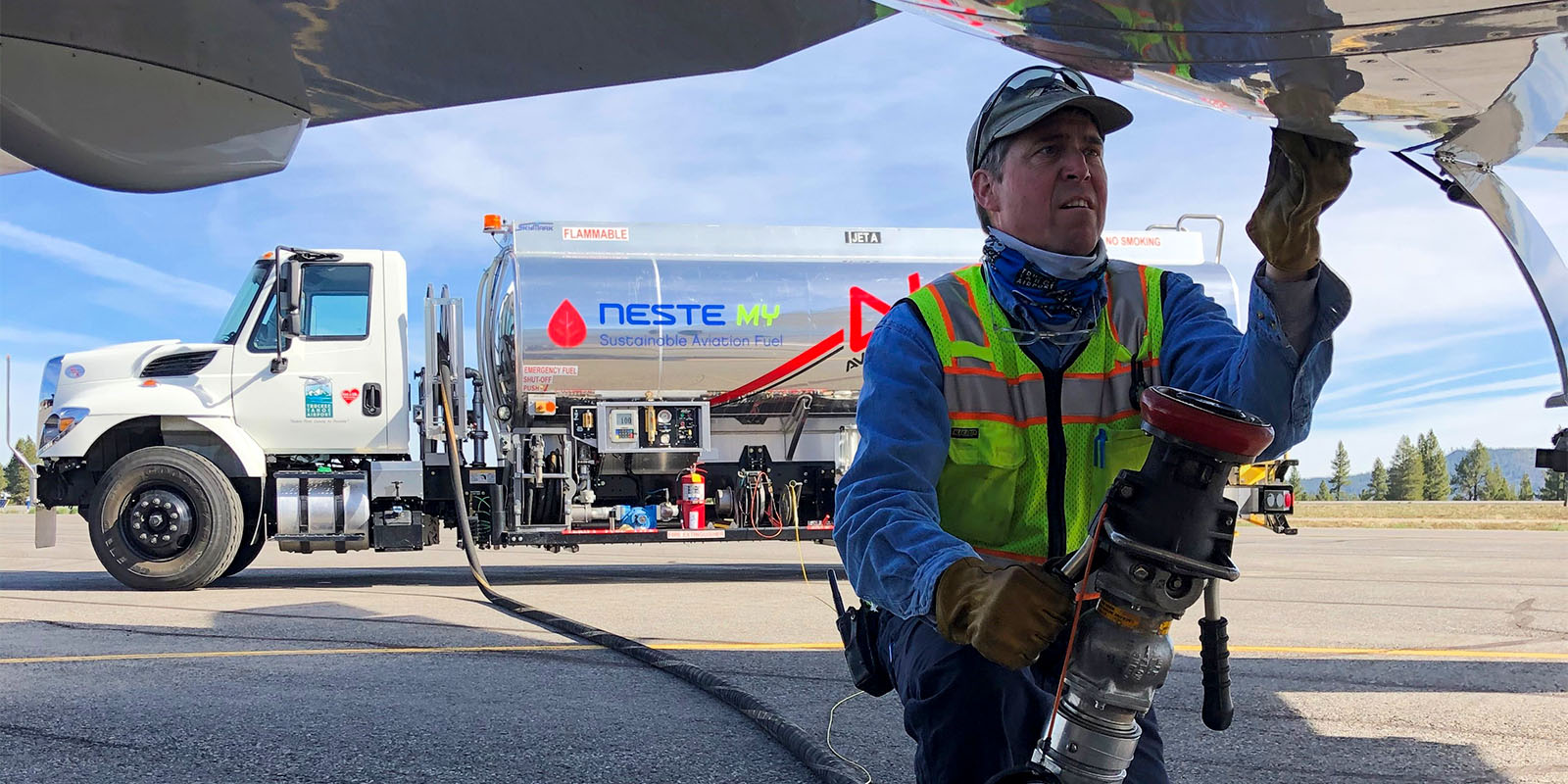 Get Comfortable with SAF

By Christine KnauerJune 19, 2022No Comments

Sustainable aviation fuel: safety for the environment and for operators.

With growing concerns over the harmful effects of greenhouse gas (GHG) emissions on health and the environment, aviation organizations around the world are acting to reduce GHG emissions while improving energy efficiency.

Sustainable aviation fuel (SAF) produced from renewable and waste feedstock can provide the greatest impact in the effort to reduce GHG emissions from aircraft, potentially slashing them by up to 100%, according to the FAA. But is it really possible to turn used cooking oil and other waste into a safe, affordable “drop-in” SAF (a renewable fuel that can be substituted for fossil fuel without the need for engine modifications)? The short answer is yes.

SAF is a blend of conventional jet fuel and highly processed raw materials such as cooking oil, grease, and other waste products. (Neste photo)

These industry stakeholders are keen to ensure that SAF reduces emissions across the fuel’s entire life cycle—from creation to harvesting, processing, refining, and transport—not just at the nozzle. Otherwise, what’s the point, they say.

Aviation represents 11% of the United States’ transportation-related greenhouse gas emissions, according to a Sep. 9, 2021, White House briefing. Of course, those numbers are rising as more and more people and cargo fly.

Since last year, HAI has joined the BACSAF’s steering committee, backed several legislative and White House proposals designed to make SAF more readily available and affordable for the business aviation community, and organized and hosted webinars on the alternative fuel. In HAI’s Sep. 30, 2021, webinar, “Sustainable Aviation Fuel: The OEM Perspective,” experts from Airbus Helicopters, Bell, and Safran discussed the advantages of SAF and answered operators’ questions about it.

“It is our collective responsibility to contribute to zero emissions, and SAF is a major contributor to reaching that goal,” said Bruno Even, CEO of Airbus Helicopters, during the webinar. “As of today, 40% of net CO2 emissions could be avoided by using SAF blends.” 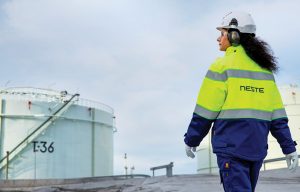 It’s clear that industry organizations as well as aircraft and powerplant manufacturers want operators to get comfortable with and start using sustainable aviation fuel.

At its core, sustainable aviation fuel is a blend of conventional Jet A/A-1 fuel and a highly processed feedstock, typically cooking oils and grease, plant oils, municipal trash, wood waste from mills, sugarcane and sugar beets, seaweeds and algae, and agricultural waste, among others. The mixture ends up as kerosene jet fuel. A fast-track approval process helps SAFs that are blended at 10% feedstock with the same types of molecules as exist in petroleum-based jet fuel get to market more quickly, according to the US Department of Energy’s September 2020 report Sustainable Aviation Fuel: Review of Technical Pathways.

“There are seven approved pathways that have been authorized so far,” explains Keith Sawyer, manager of alternative fuels for Avfuel, a global supplier of aviation fuel and services based in Ann Arbor, Michigan. “Each one is blended at a different percentage between 10% and 50%.”

All sustainable Jet A/A-1 fuels have undergone rigorous testing and certification. When blended with petroleum, they are a fully fungible, drop-in fuel, meaning they seamlessly fit into existing aviation infrastructure without issue; airports don’t need to store SAFs separately, and fixed-wing and rotorcraft operators can add them to their tanks as they would conventional Jet A/A-1 fuel, commingling at will.

“SAF is jet fuel. It meets the technical and certification requirements for use in turbine-powered aircraft engines,” says Pete Bunce, GAMA’s president and CEO. (For an update on efforts to clean up avgas for piston-powered aircraft, see “Fixing the Avgas Lead Problem,” at the end of this article.)

“Civil aviation authorities and aviation industry stakeholders, including aircraft OEMs and engine manufacturers, have put in place an exhaustive and thorough process to approve SAF.

“This drop-in fuel is compatible for use without any needed modifications, recertification, or additional validation,” Bunce continues. “Fixed-wing and helicopter OEMs have flown their aircraft on SAF and have demonstrated that it’s safe to use.”

Sustainable Jet A/A-1 fuel is already being used by aircraft operators. According to the Air Transport Action Group, more than 400,000 commercial flights around the world have used SAF since 2011. Bell Textron uses sustainable aviation fuel in its fleet of some 20 training and customer demonstration aircraft in Fort Worth, Texas.

“We partnered with Avfuel to establish a steady supply of the alternative fuel source to our facilities and became its first rotorcraft customer to use SAF,” said Michael Thacker, EVP of innovation and commercial business at Bell during last year’s HAI webinar. “Safety is always a top priority for Bell. We continue to reiterate that this fuel requires no modification to the aircraft or any additional pre- and post-flight procedures.

“Having a cleaner environment for our future is a shared industry goal and demands participation from all OEMs, customers, and innovators,” he added. 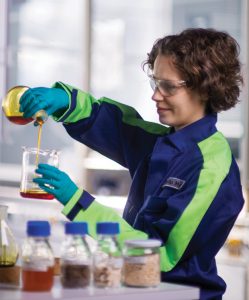 A Neste researcher studies feedstock for use in the company’s sustainable fuels. (Neste photo)

GE Aviation has been leading efforts to standardize SAF and move toward even higher blend ratios. The company is quick to reassure operators that all GE Aviation engines, as well as those supplied by CFM International, a joint GE Aviation–Safran Aircraft Engines company, require no recertification to burn industry-­­approved sustainable aviation fuel.

Several aircraft in the Airbus fleet, including the H145, H175, and H225, have recently completed flight tests with SAF, Even told participants in the HAI webinar. He said that other airframes are soon to follow, “as our entire range is certified to fly with a blend of as much as 50% SAF.”

Jean-Baptiste Jarin, Safran’s deputy program manager, research and technologies, acknowledged during the webinar, “Today, test sales [of our engines] at our OEM sites are running with up to a 35% blend … and the blend ratio will increase to 50% by 2025.”

Certainly, SAF’s higher price presents a hurdle, but there’s hope. SAF is a blend, after all, tied to the cost of crude oil. If a typical blend is 30/70, then 70% of the price comes from conventional jet fuel and 30% from the feedstock, which is relatively more price stable. As the percentage of feedstock increases—and during times when the price of oil is high—the numbers should begin to work in operators’ favor.

More important, tax credits as well as economies of scale driven by increasing demand should bring down the cost. Right now, state incentives on the West Coast are helping reduce the price in California, with Oregon and Washington soon to follow, according to Sawyer.

“In California, SAF is around 2 times the price of a refined jet gallon on a delivered basis. Outside of California, you’re looking at perhaps 2.3 to 2.5 times the price,” says Sawyer. “With various state and federal incentives on the way, the price should come down. Possibly even airports may do things to reduce the price, such as eliminate a landing fee or a fueling fee when using SAF.”

“There’s a large coalescing of initiatives now to help the industry get to the next level. Even major refiners in the United States are examining a variety of renewables,” says Sawyer.

“It’s generating strong momentum to increase production, which ultimately will yield more supply and more consumption,” he continues. “We look forward to working with more and more rotorcraft operators as they seek to integrate SAF into their supply. We can work with them individually or they can work through our network of fixed-base operators to secure the supply they need.”

With sustainable aviation fuel, the aviation industry can move closer to energy independence, greater economic prosperity, and a future that’s a little easier on this planet we call home.

As Stefan Thomé, EVP of engineering and chief technical officer at Airbus Helicopters, asked of participants during HAI’s OEM SAF webinar, “Let’s create the demand and then the supply will follow, not the other way around.”

For decades, experts have been trying to rid avgas of its lead. Added to boost octane and prevent engine damage at high power settings, tetraethyl lead, as the fuel additive is known, is quite toxic, even at very low levels. 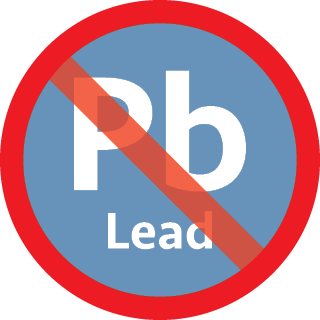 Almost all avgas in the US market today is grade 100LL (100 octane low lead), and more than 190,000 registered piston-engine aircraft use the fuel to operate, according to the FAA. With leaded gasoline for cars banned since 1996, avgas is now the largest source of lead emissions in the United States.

Creating an unleaded fuel that will deliver the same performance advantage as 100LL has thus far eluded researchers. With concern growing over lead’s toxicity, however, the aviation industry has decided to step up its efforts to find a solution.

In February 2022, the FAA announced a new public–private initiative to eliminate lead in avgas by the end of 2030 without compromising safety and while maintaining the viability of the existing piston-engine fleet and infrastructure. Backed by leading aviation organizations, including HAI, the Eliminate Aviation Gasoline Lead Emissions (EAGLE) initiative brings together stakeholders from aviation, the petroleum industry, and US government agencies to solve the complex issue of developing, testing, and certifying an unleaded fuel that is effective and safe to use, not only in piston engines but throughout the aviation fuel supply chain.

“About 25% of the rotorcraft fleet is made up of piston aircraft, which are often used as trainers and by tour operators,” says Cade Clark, VP of government affairs for HAI, who serves on the EAGLE policy committee. “Removing lead from avgas is going to require a lot of work from industry and government, as well as refiners and operators. We have to ensure we put procedures in place for a safe transition. There’s going to be a gradual phaseout: 100LL isn’t going to magically disappear overnight.”

Today, only one fuel being produced, UL94, meets ASTM International specifications for unleaded avgas, according to Options for Reducing Lead Emissions from Piston-Engine Aircraft, a 2021 report by the National Academies of Sciences, Engineering, and Medicine. An option for some low-performance fixed-wing aircraft and rotorcraft, UL94 is only available at a limited number of airports, likely due to the high cost of the separate storage and dispensing system required.

“[UL94] has the potential to be used in about half to two-thirds of existing piston-engine aircraft,” notes the report. “Aircraft would need to acquire FAA certification approvals to use UL94, which many newly produced aircraft do not have. However, many low-performance models are technically capable of using this fuel, and continued innovations in engine design could soon enable many future high-performance aircraft to use it as well.”

Experts from the National Academies suggest that the FAA issue a Special Airworthiness Information Bulletin to permit the use of UL94 in aircraft that can use it safely today, as well as provide incentives for airports that would make the fuel more widely available.

Of course, UL94 solves only part of the problem: creating a universal, drop-in, lead-free fuel replacement for all piston-engine aircraft remains the ultimate goal for the industry and the EAGLE initiative. Researchers need all the help they can get.

“Removing the lead is the right thing to do. We encourage others to join the EAGLE initiative, especially on the technical side,” Clark says. “We want to make sure we’re preserving operators’ right to fly by having fuel available, but we need to do our part to remove lead from that fuel. Taking a proactive stance by finding a solution is a better approach—and one way to protect the future of our industry.”

For more than 25 years, Christine Knauer has written for major aircraft OEMs, MROs, and avionics manufacturers as well as aviation trade organizations and publications. She specializes in editorial and marketing content that shares the stories of aviation’s people and machines. Christine holds a master’s degree in aviation safety.