Reflecting on a 40-year career and the changing face of HAA operations in Australia.

Australia’s longest-serving aircrew officer, Graham Nickisson, started in the field as a volunteer, more than four decades ago, for Surf Life Saving Australia, a volunteer rescue organization. In the years since, the helicopter air ambulance (HAA) service has evolved significantly. What Nickisson has seen and experienced in that time has changed his life as well. Today, he no longer flies but continues to advocate, both for Surf Life Saving Australia and the importance of seeking mental health support as a first responder.

ROTOR: Tell us about your duties and your crew.

Nickisson: As an aircrew officer, I’m often in the left-hand front seat, assisting with navigation, mission details, and such—basically, a nonflying copilot. Our job as aircrew officers is safety in and around the aircraft. We do a lot of confined-area landings, day and night, so we help guide the pilot in. We also work the winch. 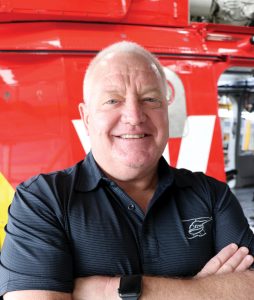 Our crew is the pilot and the aircrew officer. We also have a critical-care doctor from NSW Health and a critical-care paramedic from New South Wales Ambulance, for a crew of four.

What attracted you to this career?

When I started, Surf Life Saving Australia was using helicopters. The idea came in 1973 from New Zealand, where they thought helicopters might be able to rapidly get to people in distress in the surf.

We introduced our service in Australia in 1975. It was purely a surf rescue helicopter when I joined, running up and down the beach doing surf patrol and rescues. That’s all done a 360 now—we have Jet Skis and all the fancy stuff that can beat a helicopter.

Our helicopter then evolved into the emergency medical service field. We now have a contract with NSW Health to provide rapid-response critical-care helicopter services to people throughout northern New South Wales.

I’m a plumber by trade. I started volunteering for Surf Life Saving Australia in 1981, when I was 17. I loved aviation and helicopters, and that was the natural progression for me. I volunteered for eight years and then became a full-time paid employee in 1989.

When I was volunteering, the service only ran on weekends and on call. In 1982, once we started working with NSW Health hospitals and New South Wales Ambulance, we went 24/7. We first started carrying pagers while off duty, and then we went to living and working on the base during our shifts.

I don’t think anyone envisioned when they started the surf helicopter service that it was going to develop into the service it is today.

What stands out from your long career?

Well, it’s probably not a good impression. The catalyst that made me leave the service was the trauma associated with Australia’s biggest road accident, the Kempsey bus crash. It happened on the mid-north coast of New South Wales.

Two tourist buses collided in the early hours of Dec. 22, 1989. It killed 35 people and is still Australia’s worst-ever road accident. Unbeknownst to me at the time, my post-traumatic stress and downhill spiral began there.

It was the start to many traumatic jobs we went on. Not that everything was bad; we had some beautiful experiences. I walked a young lady down the aisle whom we picked up when she was a newborn. The Kempsey bus crash, though, was really something that has dogged me right up to today.

The trauma and the death when we arrived, it was just like a holocaust. It was definitely something a bloke of my age at the time should never see and never expect to see.

It was a catastrophic situation, likened to a major airplane crash with the amount of death and destruction that happened that morning.

I guess it was emphasized so much more because it was three days from Christmas. There were a lot of people who were going home or traveling and a lot of Christmas presents scattered around the scene. I knew [the accident scene] had knocked me about, but back then, you had to toughen up and get on with it.

Then, five days after that we had Australia’s worst earthquake, right on our service’s doorstep in Newcastle. I thought my whole world was falling apart. I was the only full-time aircrew officer at the time, and there were none of the rules they have today about fatigue. I was doing it all at the time. I didn’t get any downtime.

I was just married, and I thought, “This isn’t the life I thought it was going to be.” But, like I said, the era then was to toughen up and get on with things. That [attitude] has certainly bitten me in the ass down the track. But I continued until 2018, when I pulled stumps.

How have you seen helicopter rescue change over the years?

As the service grew, the demand grew, as did the technology. We went from single-engine JetRangers and LongRangers to an SA 365 Dauphin … one of nine made with skids. We evolved from being a VFR helicopter to an IFR helicopter. Twin-engine flying with instrument-rated pilots was a huge transition and move forward for the service.

As demand grew, we moved to bigger aircraft. We then transitioned to the Bell 412 and Bell 407. From there, we moved to the AW139. We have four of those today.

One of the biggest transitions was when we had the Bell 412, when we added night-vision goggles [NVG]. I think that was the biggest game changer in the service’s history, in terms of crew safety, to be quite honest. With NVG, we can much more clearly see the hilly terrain where we operate. We needed the technology to get down to our safest and lowest [level] for confined areas, not do any nap-of-the-earth flying you see the military do. We use the NVG strictly for safety. Before, we were using a Nightsun searchlight. Now, everyone on the crew is goggled up on our flights.

Today, we also have a very good system in place to deal with the mental health side of things. Back in the day, it was just sit around and talk about it with your mates and, “Here’s a phone number to call if you’re having trouble.” Now, we have a very good employee assistance program. That [resulted from] people putting their hand up to get out of the job. It was shocking—after 38 years, I was still having nightmares and I knew it was time to put my hand up when we went to a motor accident where an innocent young girl was killed by an intoxicated driver.

I was talking to her one minute and she passed away the next. Unbeknownst to me, she was critically ill. I didn’t realize she was as bad as she really was. That knocked me for a six. I’d just had enough. So I went to talk to the HR department.

I’m not averse to talking. I talk about it all the time. I’ve talked to New South Wales Police about men’s mental health and putting your hand up when you’re struggling. When I asked to leave, they said who better to talk to people about what it’s like to work in the service than someone who’s done it for 38 years. So that’s what I do now, tell my story and the story of the rescue service.

I’m just as fulfilled doing this job as I was when I was in the air.