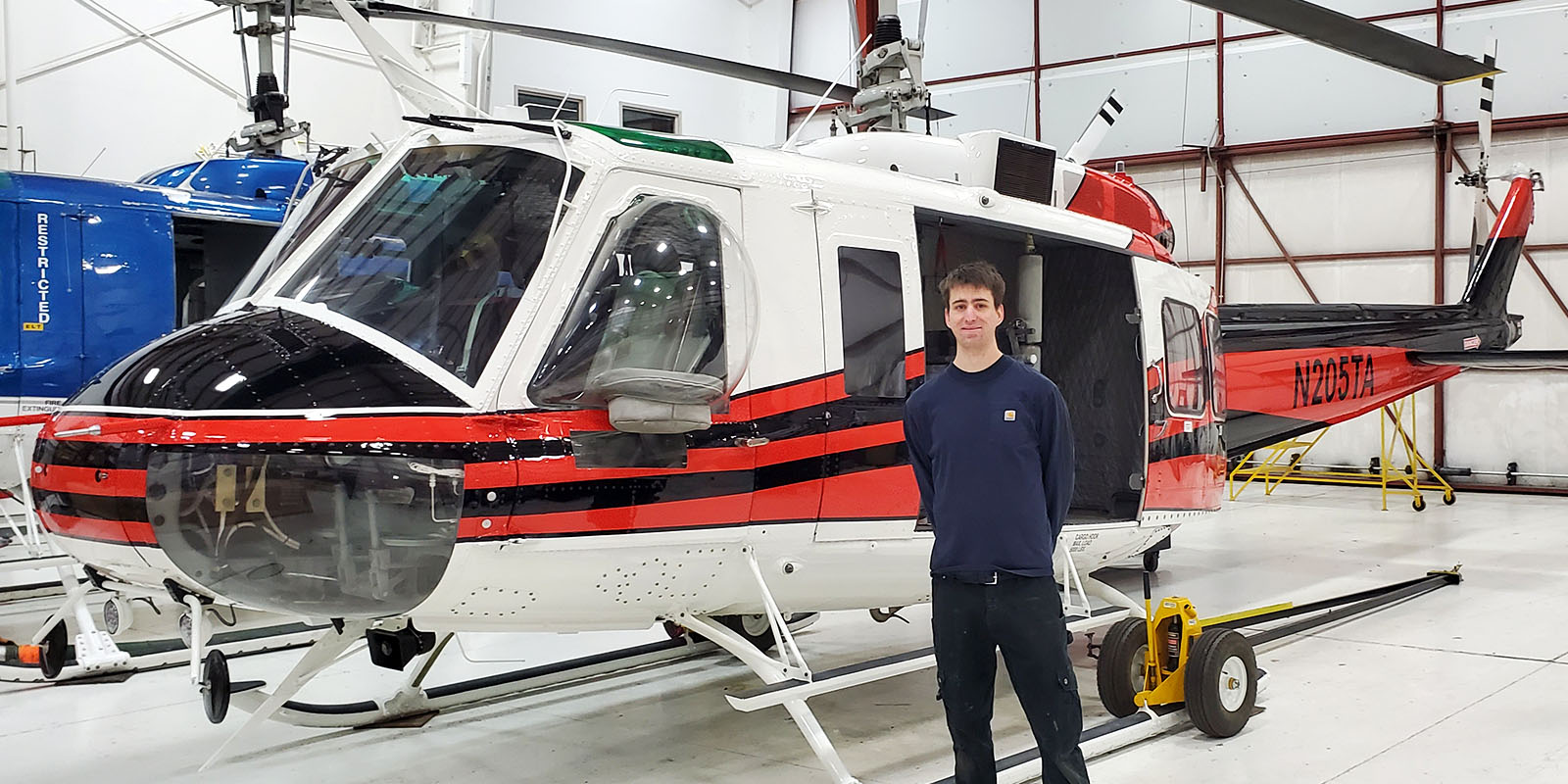 Alec’s fascination with aircraft was born from spending time with his maternal grandfather, a pilot and aviation enthusiast.

“My grandfather loved planes,” says Alec. “He got his pilot’s license before he got his driver’s license. We used to visit airports together to look at planes, and we went to lots of air shows. I even watched him use flight simulators a few times.”

After high school, Alec enrolled in an audio engineering program at Arapahoe Community College in Littleton, Colorado. After two years there, he transferred to Metropolitan State University of Denver (MSU) to pursue another passion: computer information systems.

However, after two semesters at MSU, Alec couldn’t see himself sitting in front of a computer for the rest of his professional life. He wanted, instead, more hands-on work. Alec thought long and hard about what vocation would make him happiest and went back to his roots in search of answers.

“I’ve always liked fixing things, but my personal projects were minimal before I went to A&P school,” says Alec. “I worked on my guitar and helped a few friends fix cars—nothing expansive. But doing these things allowed me to work with my hands, and I loved it. I guess that’s where [my interest in maintenance] all started.”

It was then that Alec had the idea to merge the careers of the two men who had influenced him most: his pilot grand­father on his mother’s side and his paternal grandfather, who had been an engineer at Ford.

“I sort of did a mashup of the two and came up with a career of my own,” says Alec. “The more I learned about aviation, the more it interested me. I also discovered that before my [maternal] grandfather passed away, he had a few helicopter hours written in his pilot logbook. And then my other grandfather was an engineer, and I enjoyed fixing things, so [helicopter maintenance] made sense.”

Armed with his new game plan, Alec enrolled in an A&P program at Colorado Northwestern Community College (CNCC) in the fall of 2018. Alec discovered HAI’s scholarship opportunities through the school’s job and scholarship board.

“It meant a lot to me that I was picked for the HAI Maintenance Technician Certificate Scholarship, because I had no experience in this industry,” says Alec. “Being chosen meant that someone overlooked my lack of experience and gave me a chance because they thought I was capable of being a successful AMT.”

Alec used his scholarship to assist with tuition and the purchase of aviation tools. Like many other students, his plans were delayed by COVID, which was declared a pandemic while Alec was completing his final semester. Luckily, CNCC allowed students to complete some of their work online as well as to eventually return to labs to work on turbine engines. Alec was able to graduate in June 2020, only one month later than he expected.

With the help of his grandfathers—and his HAI scholarship—Alec was able to reach his goal and is thrilled by the challenge of starting his new career as a helicopter AMT. In fact, he already has a position at Trans Aero Ltd. in Loveland, Colorado.

“What’s most satisfying about being an AMT is the process of fixing something,” says Alec. “You really get to learn everything that makes the machine operate.” Alec credits his instructors with giving him one of the most valuable tools an AMT can possess: precision. They taught him to take his time and complete tasks correctly the first time to save lives—as well as time, money, and headaches.

Alec hopes his scholarship will help him maintain a steady career as an AMT. Just like his maternal grandfather, he wants to obtain a pilot’s license to fly fixed-wing aircraft.