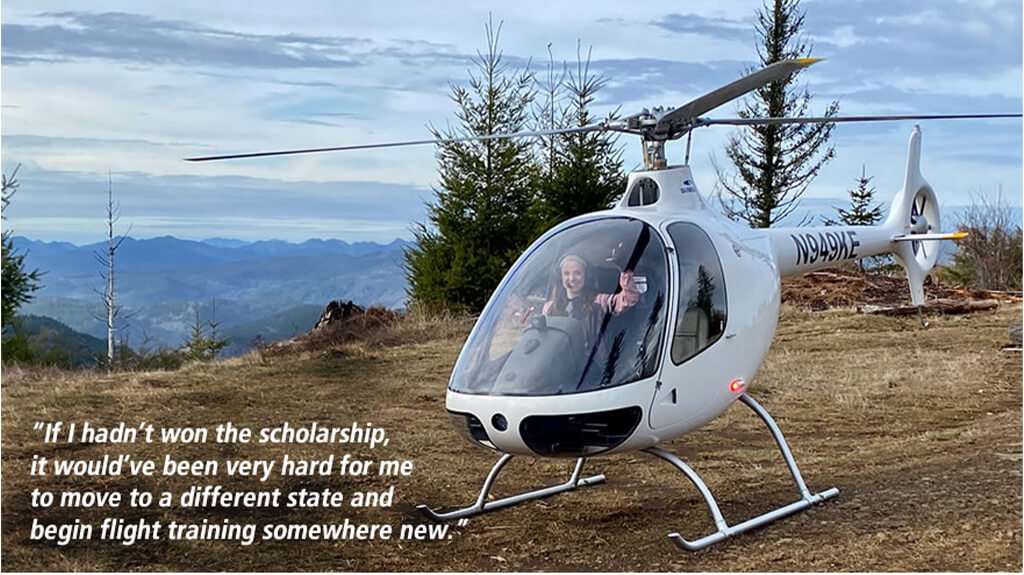 Funds give Marine Corps veteran a sense of security and hope.

With her aeronautical engineer father as a role model, Sarah-Grace Blanton knew since childhood that she wanted to work in aviation. But it wasn’t until she joined the US Marine Corps that the 2020 winner of HAI’s Commercial Helicopter Pilot Rating Scholarship was certain she wanted to be a pilot. While deployed overseas, the Kansas native met several pilots, an experience that ultimately led her to pick helicopters as her aircraft of choice.

After leaving the military, however, Sarah-Grace encountered several roadblocks when she tried to use the GI Bill to obtain her pilot’s license and instrument rating. For one, she had to pay out of pocket for her license before receiving any GI benefits. Then, when she tried to use the funding for her instrument rating, she didn’t receive her first payment for more than eight months. She found help only after writing to Congress to request assistance but even then was reimbursed for only 60% of her training costs.

She also had problems using her GI Bill benefits at the school where she originally enrolled in California. After she transferred to Precision Aviation Training in Newberg, Oregon, the process became much easier.

She says her HAI scholarship was essential to continuing her pilot studies. “If I hadn’t won the scholarship, it would’ve been very hard for me to move to a different state and begin flight training somewhere new,” says Sarah-Grace, who obtained her commercial rating in March.

The HAI scholarship has given her a sense of security and hope, she says. The funding, she explains, became a “safety blanket” that allowed her to concentrate on obtaining her commercial rating without the stress of accumulating more debt.

Sarah-Grace learned about HAI’s scholarship program from her mentor Dan Megna, a photographer for Vertical magazine whom she met at her former flight school. Megna still mentors Sarah-Grace, helping her network with other professionals and tracking her progress toward achieving her ultimate goal of becoming an air interdiction agent for US Customs and Border Protection. She also aspires to becoming a certificated flight instructor.

In addition to Megna, Sarah-Grace cites as role models her Precision instructors Henry Sexsmith and Casey Campbell. “They’re always available to help me and give honest feedback,” she says. “They’ve taught me that hard work and not being afraid to ask questions will allow me to grow, as well as how to be a safe and efficient commercial pilot.”

Like so many in the rotorcraft industry, Sarah-Grace has found her training stymied by the COVID-19 pandemic. Although she completed her commercial checkride before a stay-at-home order took effect in Oregon, under the GI Bill she won’t be able to start CFI training and have her tuition paid until the order is lifted. But Sarah-Grace, who’s studying under an aviation science degree program developed by Klamath Community College in Klamath Falls, Oregon, in partnership with Precision Aviation, thinks things will work out.

Sarah-Grace frequently invokes her instructors’ lessons, especially the concept of a mental safety checklist, which she employs before every flight. “Every time I get ready for a flight, I ask myself, ‘Did I get enough sleep? How am I feeling? How’s my preflight?’ When I get in the cockpit, I think, ‘Fly with a purpose,’ because it keeps me focused so there’s no room for error.”

Her advice to other students is never give up. “Don’t be afraid of failure and bad flights,” she says. “Pick yourself back up, brush yourself off, and keep pushing toward your goal.”

She appreciates what the HAI scholarship has afforded her and would eagerly return the favor if she could. “If money weren’t an issue, I’d contribute to scholarships and anything that allows a pilot to build their passion for aviation,” she says. “Just how it was done for me.”