Hang Up and Fly!

It’s hard to think of many aspects of modern life that haven’t been penetrated by our smartphone culture. For younger users in particular, phones have largely replaced road maps, cameras, radios, and reference libraries. They’re used around the clock to play games, look for love, and diagnose illness, not to mention shop for everything from paper goods to real estate. Increasing numbers of pilots rely on them to file flight plans, check NOTAMs, and get weather updates en route—all without ever exchanging pleasantries with a Flight Service briefer.

The potential for distraction posed by this explosion of entertainment and commercial options—and yes, legitimate aviation activities—likewise spans a great many domains, but the risk of ensuing mayhem might be greatest in the transportation sector. The loss of situational awareness for a driver, pilot, or pedestrian can lead to tragic outcomes. This is why eliminating distractions in all modes of transportation has made repeated appearances on the National Transportation Safety Board’s (NTSB) Most Wanted List of Transportation Safety Improvements. As the recitation in the preceding paragraph suggests, most of the mischief attributable to ill-timed acquiescence to the cell-phone compulsion doesn’t involve actual telephone conversations … but there are exceptions.

On Sep. 15, 2017, a commercial pilot and reporter for Albuquerque, New Mexico, television station KRQE flew the station’s helicopter to Roswell to cover a Friday night football game. He spent the night there, lifting off shortly before 4:00 pm the following afternoon to return to Albuquerque International Sunport (KABQ). Winds were light and visibility excellent under high broken ceilings. At 4:07, he placed a call to a rental car agency at Sunport, but the call disconnected after just three seconds.

At 4:12, he called again. He was a frequent customer, and the agency employee who took the call recognized his voice. She said later that while she wasn’t aware he was in a helicopter, he did sound “busy or distracted—like talking to my husband when he was working on his car.” After confirming that he’d receive a discounted rate for that day’s rental, they began discussing a future reservation. After one minute and 47 seconds, the call disconnected “in midsentence” and the pilot didn’t call back.

Near the high desert village of Ancho, a resident saw a plume of smoke rising from a neighborhood ranch and went to investigate. He found the burning wreckage of the helicopter at the end of a 300-foot debris path and notified local authorities. Fire eventually consumed most of the aircraft.

The 64-year-old pilot, a native New Mexican, held a­ ­commercial certificate for single-engine airplane, multi-engine airplane, and helicopter. He was also a helicopter CFI and held a remote (drone) pilot certification. He’d renewed his second-class medical certificate on April 2, less than six months before the accident, with no limitations beyond the required use of corrective lenses. His medical application listed 8,800 hours of total flight time that included 150 hours in the preceding six months.

He was also a veteran journalist with more than 40 years’ experience, including nearly 30 with the station. Colleagues described him as one of its best “reporters, writers, editors, photographers,” a mentor who taught new staff “how to be a good person on top of being a good reporter.”

The 1989 Bell 206L-3 had completed its last inspection on June 6, at which time it had been flown for 8,798.7 hours. Its engine had been operated for 7,956.1 hours and 7,623 cycles. It had been modified for newsgathering with the addition of a camera pod under its chin. 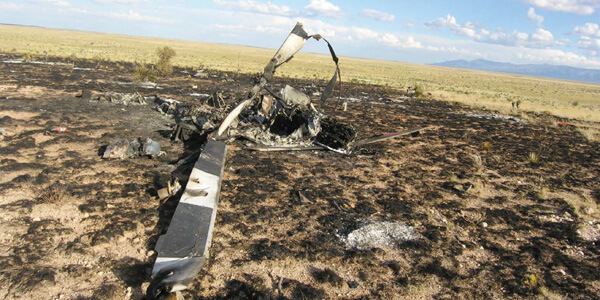 The area around the wreckage was blackened by the postcrash fire that consumed the aircraft. – NTSB Photo

The accident site was located in open ranchland at an elevation of 6,330 feet. The pod containing the television equipment was found near the initial point of impact, and assorted components of the airframe were strewn along the 300-foot ground scar, “including fractured sections of the landing gear skids, left door, anti-torque pedals, and pieces of the bottom fuselage. The forward cross skid tube was found just beyond the initial impact point. The aft cross skid tube was found slightly right of, and about 200 feet beyond, the main wreckage…. The vertical fin was found about 40 feet left of the main wreckage.” Fire had consumed most of the cabin, and the engine and main rotor system were also severely damaged by fire.

Both main rotor blades remained attached to the hub but were fractured by overstress outboard of the outboard doubler. The connections between the input lever arms and main servo inputs “were intact for all three main rotor servos.” The control tubes had been fractured by impact with some pieces subsequently melted by the postcrash fire, making it impossible to establish continuity between the cockpit and either the main or tail rotor controls, but there was no indication of any malfunction prior to impact. The engine likewise showed only fire and impact damage, with no evidence of any malfunction before the crash.

Investigators interpreted the distribution of the wreckage as suggesting a high-speed, shallow-angle impact in a stable, slightly nose-low attitude. In other words, the helicopter had been flown into the ground while under the pilot’s control.

His cell phone and a Garmin Aera 796 portable GPS were both recovered from the debris field. Telephone carrier records confirmed the two calls to the car rental agency. Flight path data retrieved from the GPS showed that after lifting off at an elevation of 3,981 feet, the helicopter tracked a direct course from Roswell to Albuquerque at groundspeeds ranging from about 100 to 125 knots. The maximum GPS-estimated altitude of 6,456 feet (126 feet above the elevation of the accident scene) was attained in the last recorded fix, about 1.5 nautical miles southeast of the point of impact.

After an investigative process and deliberations spanning 22 months, the NTSB eventually found the probable cause of the accident to be “the pilot’s distraction by a cell phone during a low-altitude flight, which resulted in controlled flight into terrain.” No surprises there—but there are a few points to consider.

A friend who’d flown combat missions in Vietnam once remarked that “helicopter pilots get nosebleeds above 3,000 feet.” It’s hard to see any reason other than a predilection for earth-skimming for the pilot of a lightly loaded 650-horsepower ship to have been zooming along less than 150 feet above rugged and irregular terrain. Sunport was reporting only a scattered layer at 12,000 feet, so ceilings didn’t prevent the pilot from giving himself the comfortable cushion of a couple of thousand feet above the highest points along the route, and the aircraft certainly had the performance to get there. With ample margin for error, a 200-foot altitude deviation during a few inattentive moments would barely have been noticed. At 126 feet agl, it was fatal.

More central, though, is the question of why any solo pilot would make a phone call in flight in the first place. From the agent’s description, the subject matter wasn’t urgent and could easily have been sorted out in the first few minutes after landing, perhaps even as the engine spooled down.

Like the drivers you see chatting away in traffic, the pilot’s familiarity with and comfort in the aircraft presumably allowed him to view the flight as otherwise empty time that might as well be put to use. The convenience and compulsive appeal of the cell phone may foster that attitude, but it’s questionable even with the benefit of an autopilot or two-pilot crew—and perilous while hand-flying alone.

At the end of safety seminars, NTSB Member Earl Weener likes to show a slide of a church signboard reading:

While there’s usually more time to react in the air, that isn’t license to let your mind wander from the immediate business of operating the aircraft—particularly in helicopters, with their inherent instability in all axes.

The airlines’ requirement for a sterile cockpit below 10,000 feet is often translated into “below 500 feet agl” for light fixed-wing craft. There seems to be no widely accepted equivalent for helicopters—but given that instability, 500 feet would seem like the absolute minimum altitude that would provide room for recovery in the event of a momentary lapse. And the need to maintain a sterile cockpit isn’t limited to phone calls. Numerous fatal accidents, including that of Colgan Air Flight 3407 outside of Buffalo, New York, have been traced to distraction by irrelevant chatter within the cockpit.

But if telephones aren’t the only potential distraction, they’ve become the most common. Protect yourself. Fly when you’re flying. Talk on the phone before or after, not during.