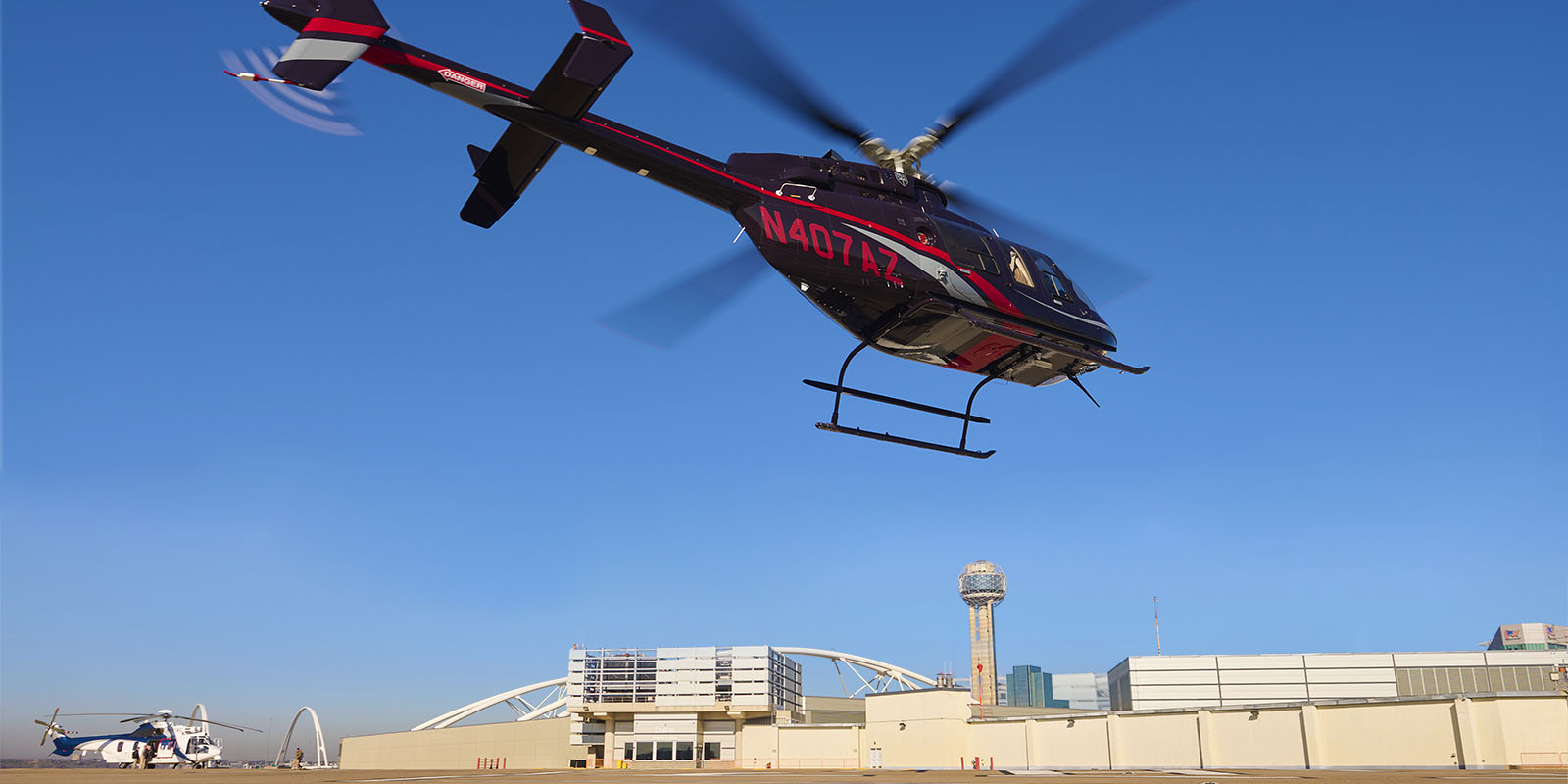 Has the Future Already Arrived?

All photos and text by Mark Bennett

Advanced air mobility is commonly illustrated with futuristic vehicles in futuristic settings. Those new vehicles sure look spiffy, but future heliports will probably look and function a lot like the Dallas CBD Vertiport does today.

HAI HELI-EXPO 2022 attendees walk out to a waiting EC225 LP, soon to whisk them away on an Airbus demonstration flight. The vertiport’s ability to host flights like these makes Dallas an attractive location for HAI’s annual show.

Dallas CBD (Central Business District) Vertiport is the only elevated public heliport in the Dallas–Fort Worth area of Texas, sporting more than 3 acres of concrete, two spacious helipads, and parking for five aircraft. In many ways, the vertiport shows the future of advanced air mobility (AAM).

Adjacent to a ground-level commuter rail and bus station, the vertiport is located on a major road through downtown Dallas and has direct access to the Kay Bailey Hutchison Convention Center Dallas, one of the largest convention centers in the United States and host to more than 1 million visitors each year. This setting aligns with the vision of incorporating AAM as a central element in a transportation hub, moving people and cargo quickly in and out of densely populated city centers. 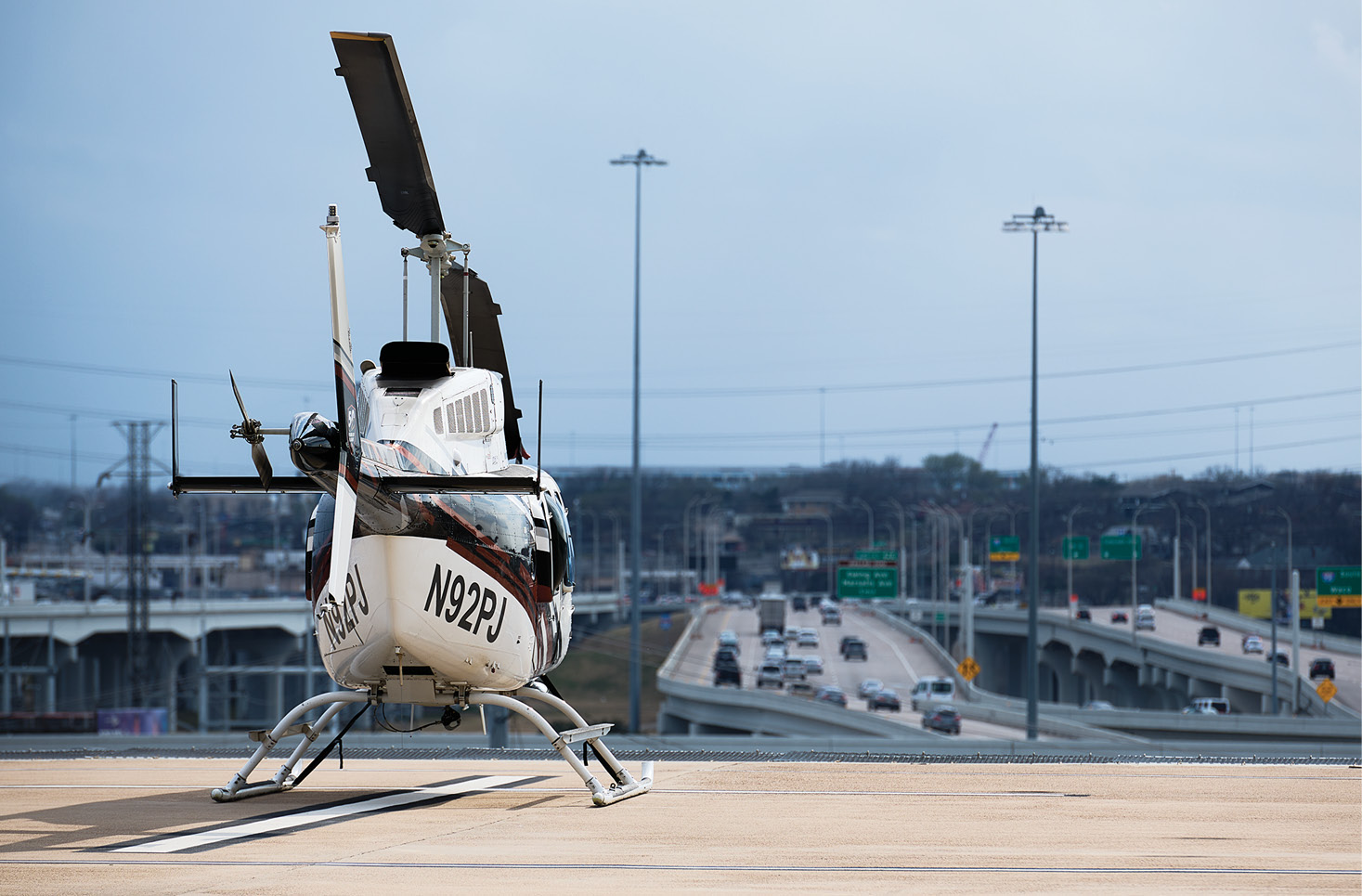 A Bell 206, parked along the vertiport’s southwestern edge, gazes out at traffic passing by on Interstate 35E. Its ability to evade ground-traffic congestion is one of the reasons AAM is predicted to have a bright future.

Dallas Vertiport doesn’t offer hangarage or refueling (though the latter might soon be addressed) but is a convenient drop-off and pickup spot for those who wish to fly rather than drive to and from the city. It’s also handy for local law enforcement, air ambulance, and news-gathering aircraft.

A reported 150-plus airframers—many of them start-ups—are developing at least as many AAM vehicles, many of them powered by electric motors. In tandem with developing a new class of aircraft comes the task of building the infrastructure to support AAM operations. 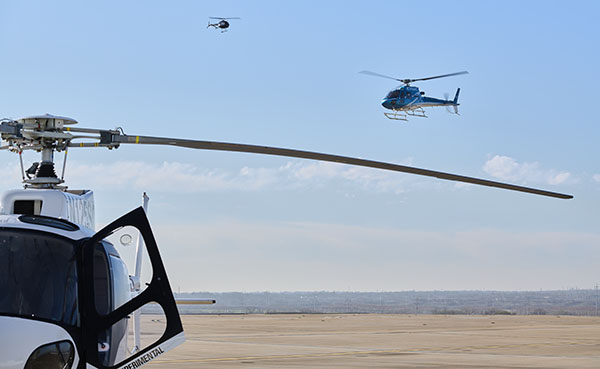 One Airbus AS350 sits on the ramp at Dallas CBD Vertiport (49T) as another departs, while a Bell 505 approaches to land. Synchronizing ground operations while deconflicting arrivals and departures is just one of the challenges to be faced as rotorcraft operations—piloted, remotely piloted, and autonomous—are expected to significantly increase in coming years.

How will that future look? On the air side, probably not markedly different from how it looks today. Whether going by the term “heliport” or “vertiport,” these ­facilities will feature acres of paint-striped concrete abutted by hangars, terminals, and lots of people coming and going

Beauty on the Inside

The terminal—the waypoint for passengers between their rideshare and the airstair—can be as modest or as luxurious as the traffic will allow. At the recently updated Dallas Vertiport (above), the floor is a stylish, polished stone–like surface, the furniture is comfier than what your typical airport offers, and the distance from the elevator to the ramp is only about 40 ft. 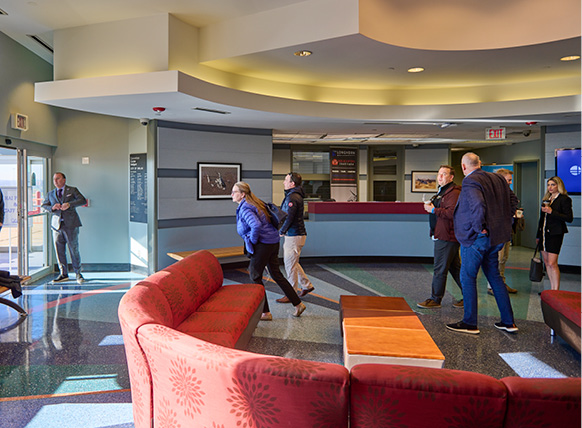 The vertiport’s recently renovated terminal building is cozy and comfortable and provides convenient access to the aircraft as well as offices and meeting rooms for flight crews and operators.

But that cozy size won’t suffice if the predicted tempo of AAM operations comes to pass. The expected floods of passengers will require security equipment, including space for those waiting to be screened and for screened passengers waiting to board their flight.

While regulatory agencies and their stakeholders trudge ahead with planning a future airspace teeming with automated taxis and flying cars, little is known concretely about the futuristic facilities that will host those flight operations. An FAA advisory circular published in 1991 was canceled in 2010 when the anticipated arrival of commercial tiltrotor traffic proved illusory. 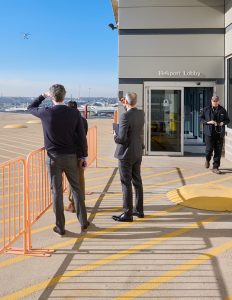 Though the City of Dallas brands the facility a vertiport, the exterior signage on the terminal building uses a more common term.

A new advisory circular is in the works, but, as the FAA notes in a draft of Engineering Brief No. 105, Vertiport Design, “The emerging VTOL aircraft and industry advanced air mobility concepts of operation are yet to be proven to perform like [helicopters with single, tandem, or dual rotors]. Additionally, because VTOL aircraft and the AAM industry are rapidly evolving, there is limited demonstrated performance data on how these aircraft operate.” In other words, the FAA isn’t able to prescribe, or even advise on, how AAM-specific heliports should look, because it isn’t yet known how AAM vehicles will perform.

At least there’s attention, if not progress. Rex Alexander, president of AAM consultancy Five-Alpha, observes, “With many in our industry looking to existing heliports to augment AAM flight operations, heliports will be provided something they have rarely ever received in the past: attention and scrutiny.” 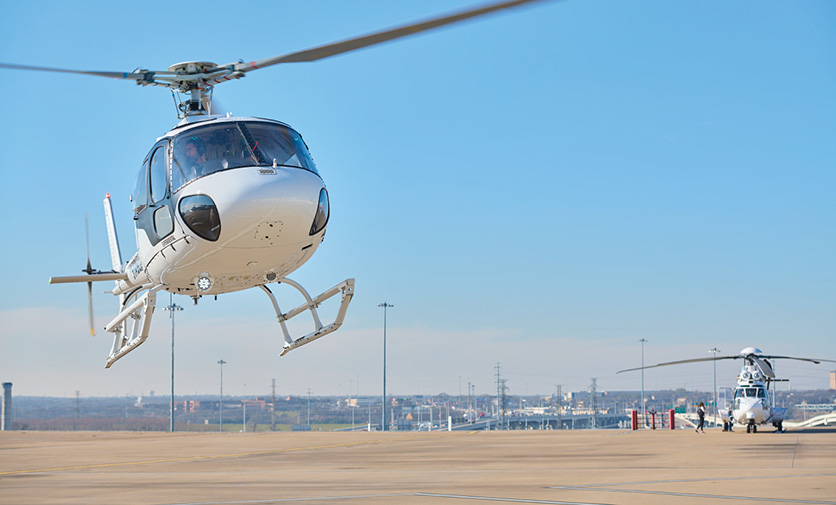 Arrivals and departures are actually cleared through air traffic control at Dallas Love Field (KDAL), 5 miles to the north-northwest, in whose controlled airspace the vertiport operates.

Most future heliports will look and work the same as they do now because the business will still be about utility, durability, efficiency, and safety. And as Alexander points out, successful heliports will share these attributes with Dallas CBD Vertiport: “convenient access to ground transportation; proximity to an urban hub; a large, unencumbered ground footprint ripe for expansion; clear, open airspace for flight operations; and the support of the city in which they operate.”

Not the Only Heliport in Town

Dallas CBD Vertiport might be the only elevated public heliport in the ­Dallas–Fort Worth area, but there are two other public heliports, each barely 10 miles—as the AAM flies—from the vertiport. What these two may lack in altitude, though, they make up for in other ways. 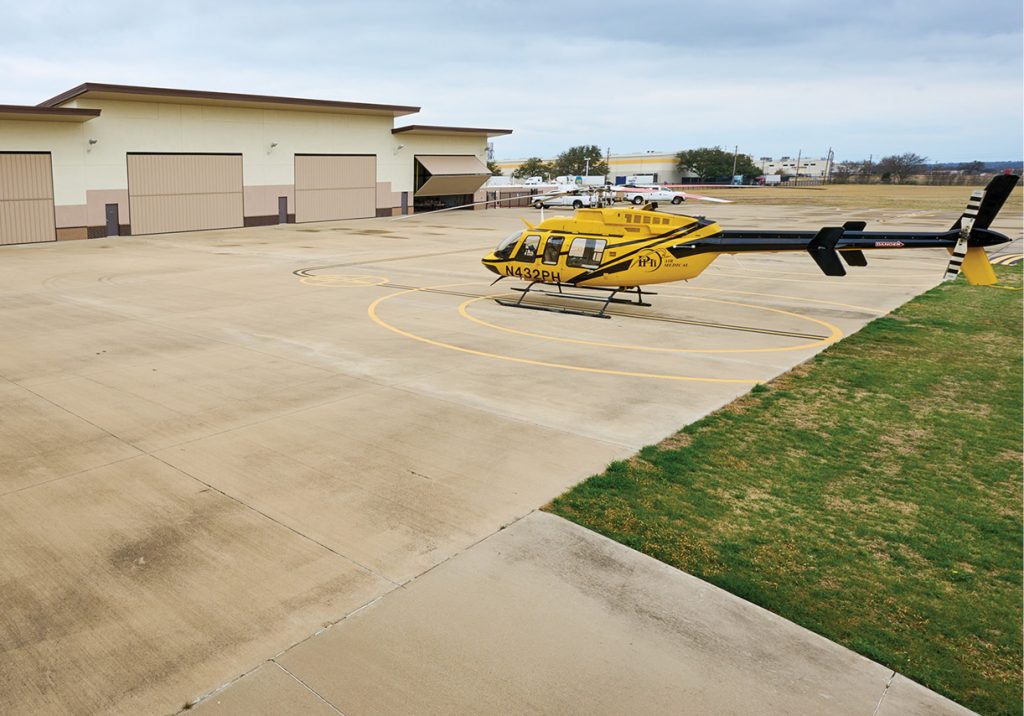 A PHI Bell 407 on the ramp at DeSoto Heliport.

Garland/DFW Heloplex (T57), northeast of the vertiport, was opened in 1989 as the first municipal heliport in Texas. Originally intended to shuttle passengers to and from Dallas Fort Worth International Airport (KDFW) and Dallas Love Field (KDAL), the heliport faced closure a mere two years later, when the market for the service hadn’t materialized.

It avoided that early demise and, in 1999, the City of Garland signed a long-term lease with SKY Helicopters, the current operator of the facility. Not only does the company provide fuel, hangarage, and maintenance, it is also a dealer for Robinson Helicopter Co. and provides both Part 141 and Part 61 training. SKY also offers your standard fare of flying services, such as tours, aerial surveys, and aerial photography/videography, and provides aircraft and crews for electronic news-gathering in the DFW area. 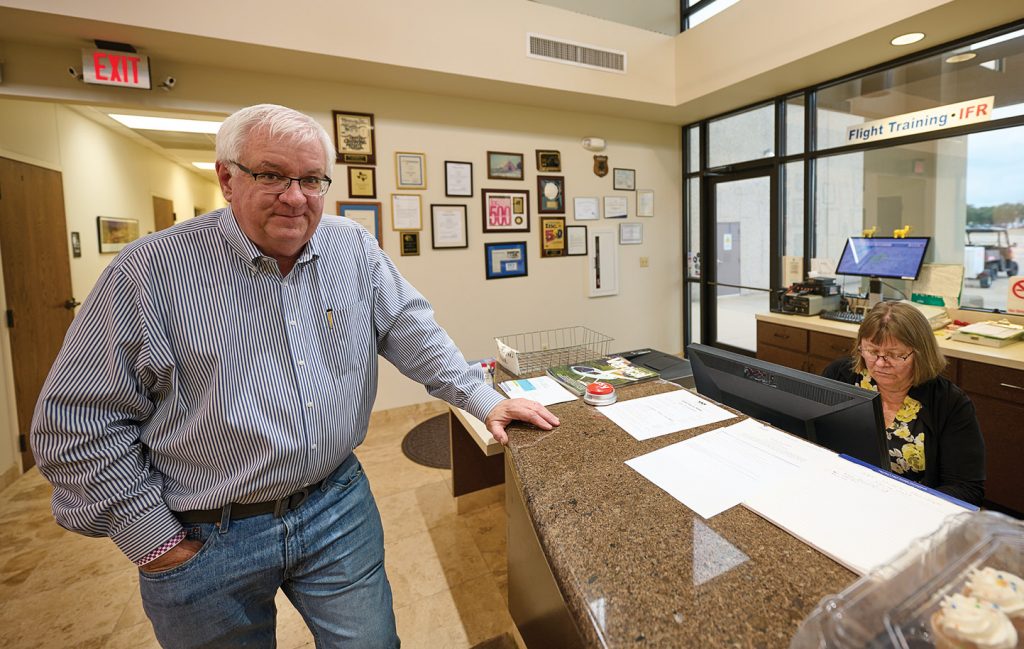 Ken and Connie Pyatt, shown at their Garland facility, operate both the Garland and DeSoto heliports through their company SKY Helicopters.

DeSoto Heliport (73T), south of the vertiport, opened in 2014 and is now operated by SKY Helicopters. The range of services isn’t as broad as at Garland, encompassing fuel, hangars, and maintenance, but the heliport is the base for a number of PHI aircraft and training personnel. It also has room to grow as the demand arises, including, in preparation for future vehicles, plenty of electric power on tap.