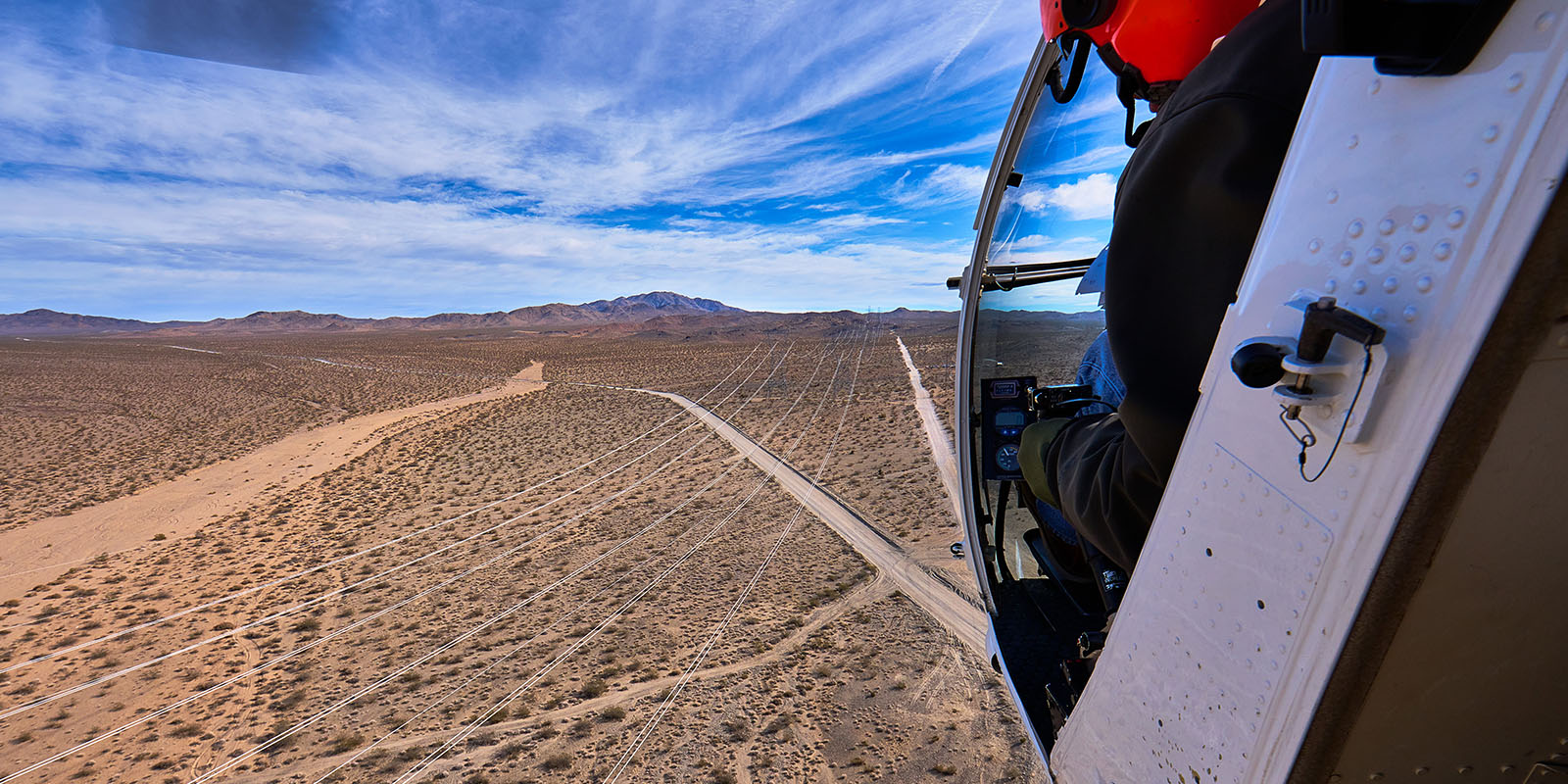 By Mark BennettJanuary 18, 2022No Comments

A Photo Essay by Mark Bennett

Modern life—brought to you, in part, by helicopters.

Most work done by helicopter crews starts early. This day would be no different, so the crew begins assembling at the hangar an hour before the sun will scale the heights of the Los Pinos Mountains, east of Belen, New Mexico. Their mission that day: string 345 kV conductors and static lines through 8 of nearly 800 newly built towers. 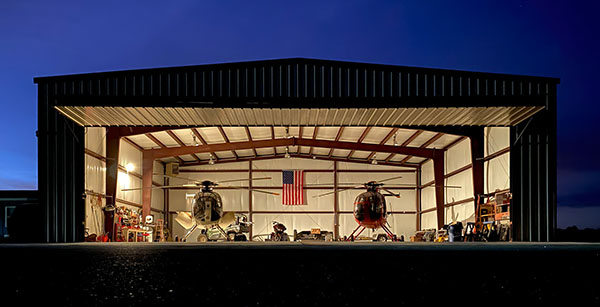 For some segments of the project, Rotor Blade was able to keep its helicopters hangared at the Belen Regional Airport (KBRG), a welcome amenity not always available to aircraft working many miles from any facilities.

What’s Up with Transmission Lines?

The cables that carry high-voltage electricity over long distances are called transmission lines. They require very good insulation to prevent electricity from arcing to a nearby object, like a tree or building, or to the ground. Because air is actually a good insulator, most utilities string the lines from tall towers, which typically range from 49 to 180 ft. in height.

What a utility needs, then, is a tool that can carry workers and materials efficiently over distances both vertical and horizontal. On some days, the job is to transport a crew some miles to a remote location. On others, it is to move as little as possible, holding a precise hover close to wires carrying as much as 800,000 volts while a power-line technician completes a task. 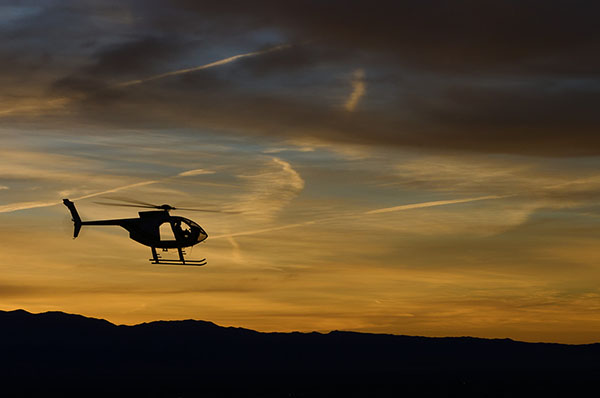 An MD Helicopters MD 500E heads to its landing zone before the sun is up, ready for a full day of lines, line workers, and tools.

Almost anything a helicopter can do for transmission lines, a truck, crane, or even a line worker can accomplish. But efficiently? That’s where the helicopter comes in ahead.

Phillip Smith, chief pilot with Rotor Power, puts it this way: “A helicopter can pull the pilot rope through eight towers in less time than it took to set up the bucket truck that initially offered the rope to the helicopter’s grapple.” If done by trucks alone, stringing that rope requires multiple people and time-consuming setups at each and every tower.

The speed and efficiency of helicopters, compared with ground-based operations, reduce the hours spent by workers as well as their accompanying risk. And when a project is slated for a precarious or sensitive environment—across a gorge or through a fragile desert ecosystem—using aircraft reduces the impact of ground access to the site, resulting in both economic and environmental wins.

Pilots thread rope through stringing blocks without the need for people on the towers, a delicate dance between agility and stability. But much work still needs to be done by hand on those towers, and there’s no faster elevator than a helicopter, up or down. 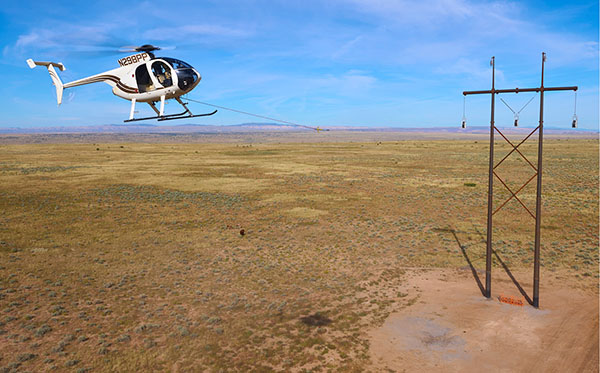 Near Belen, New Mexico, an MD Helicopters MD 500E operated by Rotor Power pulls a pilot rope through the outboard stringing blocks in a line of transmission towers.

Helicopters position workers at or on the lines to make repairs, install spacers, or add devices to minimize the effects of wind, snow, and even noise. In some locations, they install devices to ward off birds or even bigger “birds”: aircraft.

According to Wilson Construction production pilot Darin Sturdevant, the pilot’s goal is to get the line technician “into the most comfortable position, which lets them work more quickly and efficiently. You are literally adjusting their position by inches.”

And whether heading up or down, workers get a ride like no other, sometimes suspended 75 ft. below the aircraft. 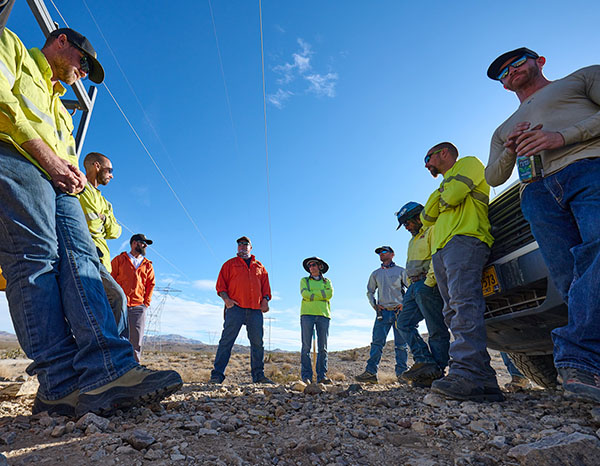 East of Apple Valley, California, Wilson Construction’s Jay Clark (center, in orange) addresses the crew during the briefing, known as a tailboard, that opens each workday. How the team will coordinate to ensure safety that day is always on the agenda.

Another key task for utility workers is to inspect the towers and lines for issues requiring maintenance, and to protect them from environmental damage. Inspections can be done with bare eyeballs but are increasingly accomplished with cameras and specialized optical sensors carried by both crewed and uncrewed aircraft. As unmanned aircraft systems (UASs) receive approval for more types of operations, however, especially those beyond visual line of sight, industry observers expect uncrewed aircraft will perform the bulk of inspections.

One constant maintenance activity is vegetation management. Where trees border the right-of-way surrounding power lines, their growth, both horizontal and vertical, must be monitored and, when necessary, contained.

Once again, helicopters are uniquely efficient at the task. Aerial saws have a fearsome look and a tree-trimming ability to match. Twenty-seven feet of spinning blades, slung on a 90-ft.-long combination cable and flexible conduit providing directional control, make quick work of errant limbs. For the too-tall trees, “topping” saws cut through the trunk and direct the falling timber away from the lines.

The world is increasingly interconnected, and much of that connectivity is powered by electricity. Coupled with a growing reliance on renewable energy and the move toward electric vehicles (cars and aircraft alike), this means the need for electric power keeps growing. The market for helicopter services to keep that power up and running is growing too. 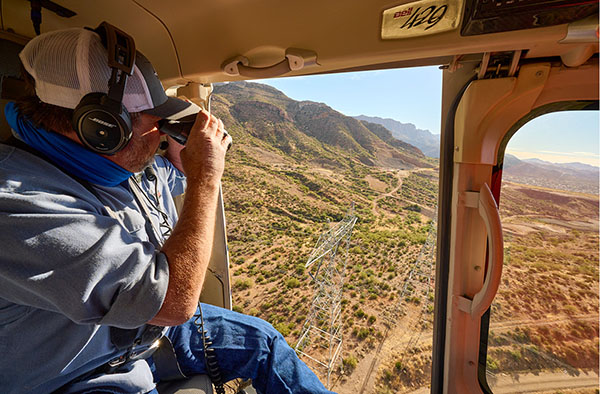 A Bell 429 belonging to Salt River Project carries inspector Mike Deubler as he examines the utility’s transmission towers and lines supplying power to much of central Arizona.

Perhaps no other sector of helicopter operations affects so many people in so many ways, minute by minute. When our power is on, we tend not to give it much thought. When it isn’t … we struggle.

Some helicopter industry sectors, such as law enforcement or air ambulance, are acknowledged as serving society. Let’s add utility operations to that list. 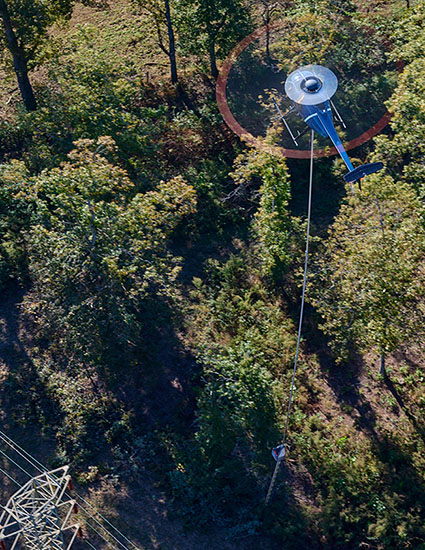 To pull the pilot rope through the stringing block suspended from the crossarm between the poles, the same helicopter must thread the rope in a multistep process with a long tool called a needle, the yellow device dangling from the crossarm. 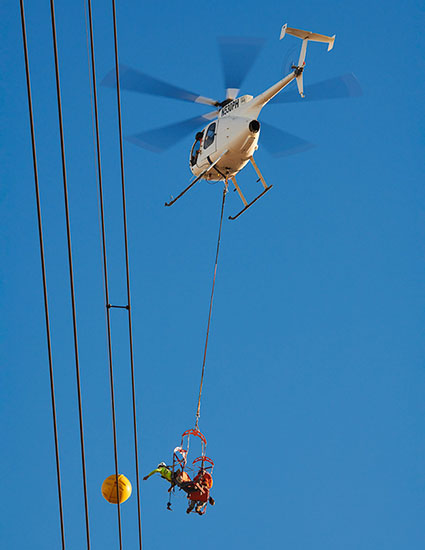 A Wilson Construction MD 530F suspends a crew as they install an aerial marker ball in Ontario, California. 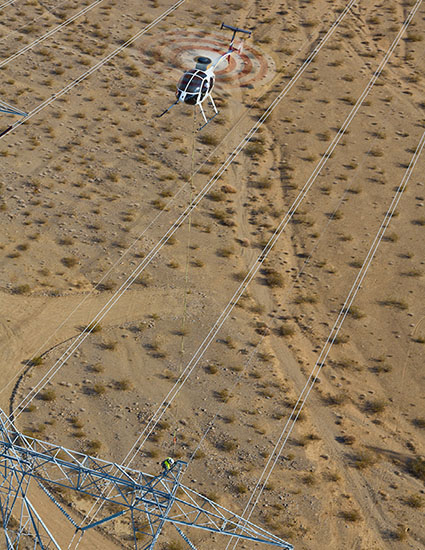 A Wilson Construction MD Helicopters MD 530F deposits a line worker to a “goat’s horn” on a transmission tower east of Apple Valley to replace a static line.