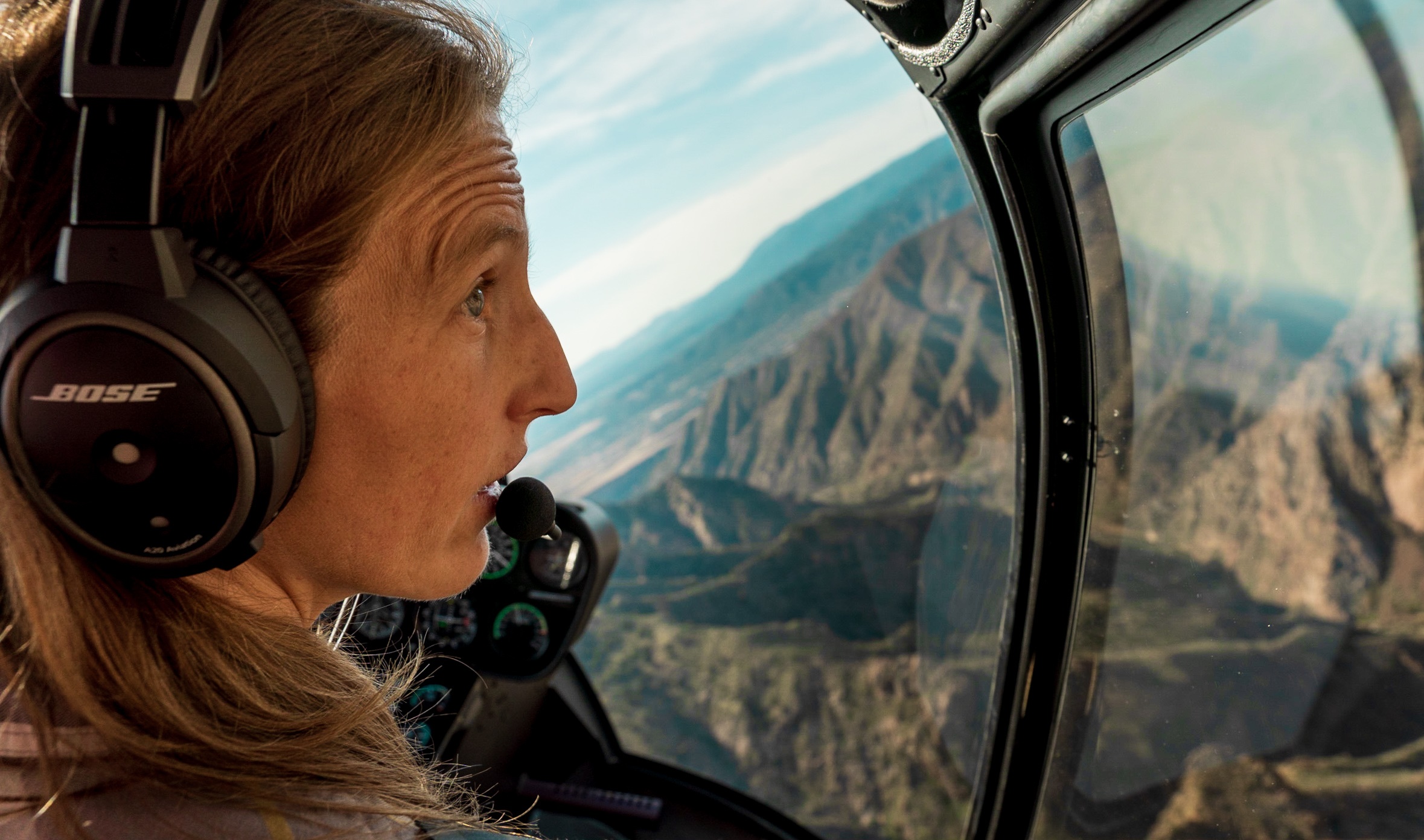 Growing up in Colorado Springs, Colorado, Jessica Meiris enjoyed mountain biking and rock climbing. She loved climbing so much, in fact, that she later worked as a mountain guide for more than 15 years. But as she entered her late 30s, she knew that, despite her love for her job, she physically wouldn’t be able to remain a guide forever. So she decided she needed a backup career.

Little did she know that a devastating accident would simultaneously lead her to her first encounter with a helicopter, end her job search—and change her life forever.

One day in 2010, Jessica and her then-boyfriend, Buster Jesik, were on a climb in Red Rock Canyon National Conservation Area in Nevada when he fell from about 50 ft.

“As a mountain guide, I had medical training, and I thought he might have injured his back and head,” recalls Jessica.

She flagged down a couple of climbers, who called 911. Within 30 minutes, she could hear a helicopter approaching to take Jesik to the hospital.

While Jessica was focused on getting Jesik to safety, she couldn’t help but notice all the helicopter’s cool capabilities from the moment it landed. She remembers the severity of the situation, of course, but also recalls grinning while getting her first helicopter ride that day.

“I was amazed,” says Jessica. “We were in a tight canyon that had no place to land, so the pilot balanced one skid on a rock when we loaded into the aircraft. It was so impressive—from the maneuverability of the machine to the skill of the pilot and the coordination of the rescue. And [the crew] got there quickly and safely.”

Jessica says that during the helicopter ride, she made a mental note to investigate a career in rotorcraft after the emergency was over. When the time came to begin looking for a new profession four years later, she began researching all the fields she was interested in, placing helicopter work high on her list, for many reasons. For one, she wanted to remain working in the mountains. For another, she sought to give back to climbing. Jessica also wanted a job that was physically relatively easy but mentally stimulating.

“I’m not one of those people who wanted to fly since I was 6 and suddenly achieved my dreams,” says Jessica. “Most of the decisions I make in my life are practical and well thought out, and this is one of them. I knew I needed a backup career, and this was the best fit for me.”

In 2018, Jessica joined HAI and quickly began taking advantage of all the resources the association offers its members and the aviation community at large. That same year, Jessica attended her very first HAI HELI-EXPO® and has been to every one since.

One of the most essential opportunities Expo offers, Jessica says, is the chance to network with other industry professionals. “I can’t emphasize enough the importance of networking in this small industry,” she says. “Network­ing is everything, and I’ve gained so much knowledge and so many connections and have had great conversations at the show. And it’s fun to be around helicopters for a few days.”

Jessica says Expo is also a great place to meet up with friends and other aviation pros she already knows, including members of Whirly-Girls and the US Helicopter Safety Team, two nonprofit organizations for which she volunteers.

Jessica started flight school in September 2018 and finished in March 2020. After receiving her private, instrument, commercial, CFI, and CFII ratings, she briefly worked at a flight school but quickly realized the environment wasn’t the best fit for her. So she decided to start her own helicopter company, V3 Initiative LLC. Based in Colorado Springs, V3 offers independent flight instruction, helicopter ferry services, and scenic tours.

By choosing a nontraditional path early in her career, Jessica says she depended on and collaborated with other pilots who were on a similar trajectory; namely, Gary Cleveland with Cleveland Helicopter Services and Matt Goodrich, an entrepreneur with whom she launched a scenic tour company during the COVID-19 pandemic. This type of collaboration, she says, “is critical to success in the industry.”

Jessica is committed to inspiring her fellow aviators as well as those interested in entering the industry like she did three years ago. The V3 in the company’s moniker, which stands for Vision, Vulnerability, and Voice, reflects its proprietor’s values of community, hard work, and following one’s dreams, she says.

“Vision encourages people to make big goals,” says Jessica. “Vulnerability means staying true to yourself, being real with other people, and being willing to try—even in the face of doubt and failure. Voice refers to openly sharing your dreams, as well as your challenges and fears, with people. Your voice is powerful; use it to create your world and incorporate others in your vision.” 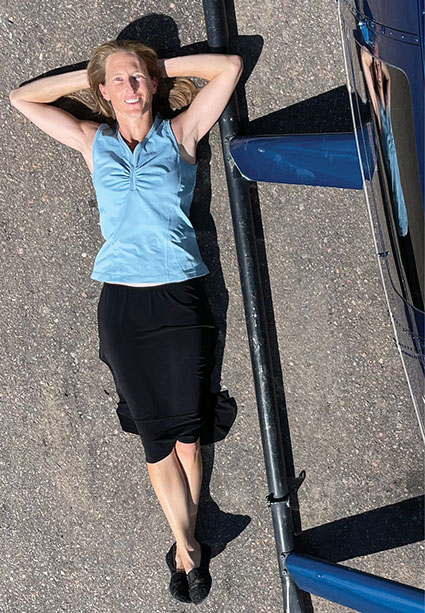 In 2021, Jessica received HAI’s Michelle North Scholarship for Safety, which is awarded to a commercially rated pilot who demonstrates an outstanding aptitude for safe flying and aviation best practices. Jessica says she appreciates HAI’s scholarship opportunities because they’re available to everyone.

“They aren’t biased toward a specific sex,” says Jessica. “Yes, we need more female pilots, but we also need more safe pilots of both sexes. The more opportunities that are open to more people, the better the results.”

Jessica’s success a year after starting V3 shows her determination to make her wildest dreams come true. It wasn’t easy, ­however, she says. One of the biggest challenges she faced in becoming a pilot was one that’s commonly cited in the industry: finances. Another obstacle she encountered while starting out in aviation isn’t frequently reported by aspiring helicopter pilots: obtaining her second-class FAA medical certificate.

“If you’re healthy, [the medical exam] should be straightforward,” says Jessica, who suffers from osteoarthritis. “I thought it would be an easy box to check, but boy, was I wrong.

“I would suggest to other aviators who haven’t been through the process to talk to people who’ve done it before, especially if you have a medical condition,“ Jessica adds. “Talk to someone with a similar condition, or a physician, so you can get a feel for what will be required of you [to pass].”

The medical exam notwithstanding, Jessica doesn’t let roadblocks keep her down, and her optimistic personality allows her to see the positives throughout hard times, she says.

“Have you ever seen a kid go bowling with bumpers on? I think life is a similar process: I’m the ball, and the bumpers are my community nudging me in the right direction,” says Jessica. “The ball won’t go in a straight line, and I’ll crash into the sides every now and then, but I’ll get the strike if I start with enough momentum, keep it rolling, and accept help from my community.”

Jessica cites the help she’s received from other professionals in the field, including her mentors, as a source of her inspiration. She mentions Dave Johnson, her designated pilot examiner for most of her ratings. The longtime pilot has flown fixed-wing aircraft, helicopters, hot-air balloons, gliders—you name it. His extensive career, passion for aviation, and humility have left their mark on Jessica. Another mentor, Darryl James, a Vietnam veteran pilot, taught her to be tenacious and confident, Jessica says.

“[Darryl] told me, ‘You’re not flying a helicopter, you’re managing energy. Someday, the helicopter will simply become an extension of yourself. If you shift your thinking from all the controls and details and boil it down to where your energy is stored in the system (airspeed, altitude, how fast your rotors are turning), then you can manage a helicopter in a completely different way.’ Nine hundred hours later, I notice that same mentality within myself.”

In addition to passing on to others the lessons she’s learned from her mentors, Jessica offers a piece of her own advice for new aviators.

“Be resourceful,” she says. “Fiercely network, and volunteer your time. And never give up or let someone tell you you shouldn’t or can’t!”