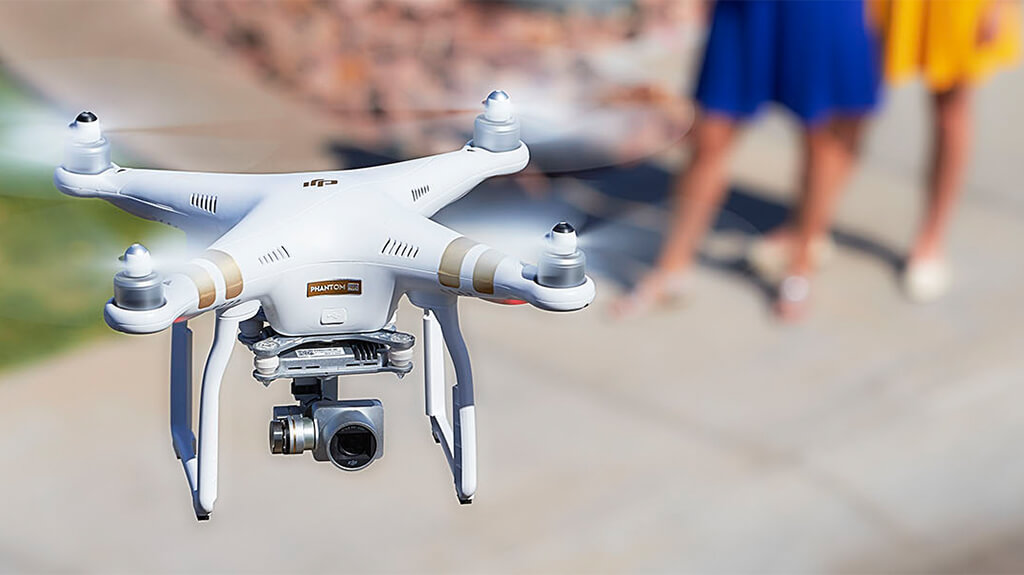 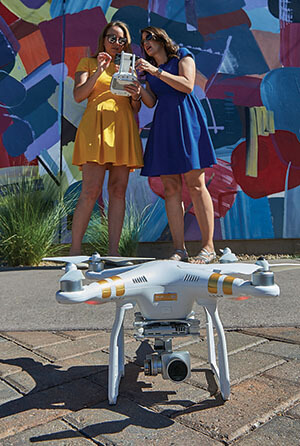 Elizabeth Rohe, left, and Jessica Bautista are digital journalists with the Town of Gilbert, Arizona. When operating a drone, one flies while the other acts as a visual observer, on the lookout for fixed hazards and transient dangers. Photo by Mark Bennett/HAI

Stories and photos by Mark Bennett and PJ Barbour

It’s an exciting time in drone aviation. This is an industry making it up on the fly, figuring out basic questions about maintenance, operations, and training — just as a previous generation did with helicopters.

Among the many questions to be answered about using drones in your aviation business is this: how do we start?

If you haven’t already launched your first drone, here’s a look at some people who have and who are figuring out some of the basics of drone training.

The Town of Gilbert, AZ

Elizabeth Rohe and Jessica Bautista use drones as a story/image/video collection tool in their work as digital journalists for the town of Gilbert, Arizona, southeast of Phoenix.

The two had limited aviation experience: Bautista had flown her husband’s drone, and Rohe had flown a co-worker’s.

Both are hard-working, Type A students, so they took studying for the Part 107 exam seriously. They enrolled in an online course, studied together for a few weeks, and each passed much above minima

The two recommend building flight time as the best way to learn more about flying drones. “The more I go out and fly, the more comfortable I get,” says Rohe. “You’ll encounter other situations so you’re always learning.” In practice, they work as a two-person team — a remote pilot in command and a visual observer — which is not required by the FAA but is encouraged.

The two journalists stress that technology is not what drew them to drones. “We love using drones, not just because they allow a completely different perspective, but because that new perspective inspires us to push the envelope, creatively, when it comes to videography,” says Bautista.

They are members of a Facebook group, Amelia Droneheart, which promotes women in the UAS industry. As Dronehearts, they want to inspire other women to become part of this new wave of aviation. 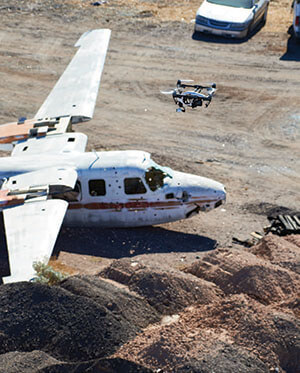 Brian Kotsur, deputy chief of the Mesa Fire and Medical Department, is one of three certified drone operators in the department. Here he demonstrates one of their aircraft at the city’s public safety training facility. Photo by Mark Bennett/HAI

Mesa, Arizona, is the third-largest city in the state and one of the first to add UAS to its fire department two-and-a-half years ago. The department’s three operators, all sworn firefighters, work with two drones and train with two others. They also plan to add two more operators in the near future.

Total investment for all four aircraft plus accessories was about $12,000, a tremendous savings compared to manned aircraft.

Deputy Chief Brian Kotsur explains, “We fly on search and rescue, commercial fires, inspections, preplanning for safety hazards, and water rescues.” This last mission can include not just feeding video to a ground station but might also involve dropping a personal flotation device to a person in trouble.

Training was obtained first through local trainer John Nunes. A more intensive course was later taught by Nunes in the Phoenix area but completed and certified through the University of North Florida’s Institute of Police Technology and Management. The training included 40 hours of classroom work and more than 25 hours of flight training, including mission-specific training.

The department conducts ongoing training as well. In 2017, it flew its UAS for 116 hours, three-quarters of which were training hours; responding to 14 incidents consumed 30 hours.

Kotsur tells of one incident when the drone made significant contributions to the department’s activities. “It was a large commercial fire where I was assisting the commander in the command post. The fire appeared to be extinguished but I was able — with the drone — to see that it was, instead, reigniting in a remote part of the building.”

Rather than packing up, the crews reengaged and were able to fully extinguish the blaze. 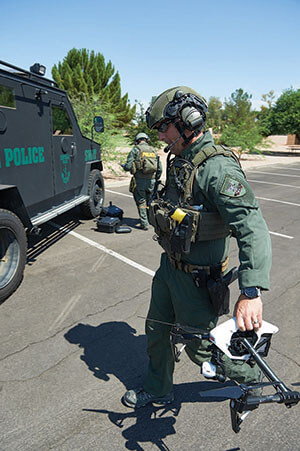 Sgt. Austen George with the Scottsdale PD (above, near) and Det. Paul Larsen suit up for SWAT duty, armed with not just sidearms but with drones. Photo by Mark Bennett/HAI

Scottsdale, Arizona, is considered a resort destination. Less so in the summer, when temperatures can climb to 120 °F, but a different kind of heat can be expected when someone threatens public safety — the police department’s SWAT unit. And where that unit goes, so go drones.

The Scottsdale PD SWAT unit has been flying drones since 2016 with six pilots, all sworn officers. They fly a range of missions, including crime scene investigation, accident reconstruction, and overwatch and SWAT missions.

The SWAT team uses a smaller drone (see photo below) to perform indoor reconnaissance. This drone is less reliant on GPS, which allows it to be flown indoors with a higher degree of accuracy, and even smaller drones, with obstacle avoidance sensors, are being considered. According to Sgt. Austen George, “Budgeting is the biggest limiting factor, but we would also like to get a larger drone that can carry both visual and FLIR cameras, with greater endurance.”

Flying a drone is harder than it may seem, even for seasoned pilots. For one, your frame of reference in relation to the aircraft will change, depending on the drone’s location and trajectory. Is it in front of you, heading away? Is it behind you, heading in your direction? This is very different from sitting in a cockpit, where you move with the aircraft. 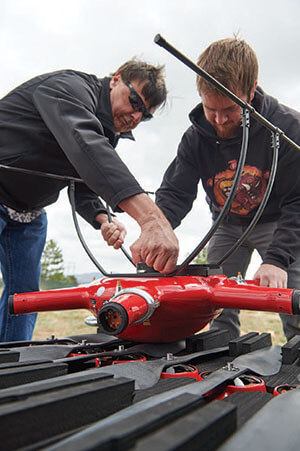 Challenger Aerospace of Reno and Las Vegas, Nevada, employs not just a larger drone, compared to most, but a level of training not common in the industry — intensive, multiple-day, hands-on training with a hexacopter that spans 7 feet. The training course as laid out by the Chinese manufacturer of the drone runs eight days, but the training is exclusively hands-on — the manufacturer provided no documentation.

Although the FAA considers drones to be aircraft, one way in which they differ from conventional aircraft is that when you unwrap your brand-new drone, it most likely will not be accompanied by the detailed manuals for operations and maintenance that accompanied your helicopter. This is one area where you will want to leverage your previous aviation experience to fill in the gaps.

Challenger now is designing and manufacturing multirotor drones as large as 12 feet across, with up to eight rotors. Unlike the imported multirotor aircraft, Challenger’s indigenous systems will include full documentation and training materials, and the company intends to address an area they see lacking: mission-specific training.

To satisfy that need, Challenger will be opening a 5.5-acre facility adjacent to their 12,000-square-foot manufacturing space outside Las Vegas, allowing them to build, test, and train in one location.

Mark Bennett worked for McDonnell Douglas Helicopter/Boeing for a decade, then in 1999 cofounded an aerospace-only marketing agency. With nearly 30 years of photography and design experience serving the aerospace and defense industries, he founded AeroMark Images to shoot and write for both industry and media. You can contact him at mark@aeromarkimages.com. 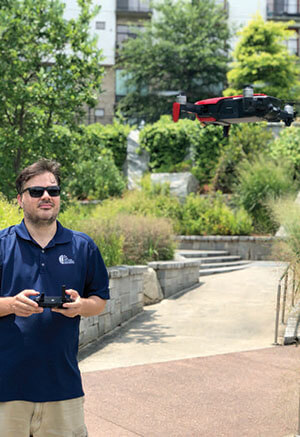 PJ Barbour with his drone, a DJI Mavic Air. Photo by Alecia Zackery

Drones are a great fit for aerial photography and videography. HAI’s Video and Multimedia Producer PJ Barbour recently earned his Part 107 certification — without any prior pilot experience. Below, Barbour discusses the process of certification in his own words.

Video producers like myself are always looking for new ways to improve our skill sets. This could be learning a new software tool or discovering a new way to capture video. Using unmanned aerial systems (UAS), or drones, to capture video required both. As someone with no other pilot certifications, earning my Part 107 certification was an eye-opening process that is already paying off.

When drones first started coming onto the market, I was intrigued. But their price and size kept me from being really interested. Now there are drones for professional use that can shoot 4K video, can be held in one hand, and can be programmed to make movements that could never be done with a flight joystick. The applications for my line of work were too good to pass up.

In January 2018 I bought my first drone: a DJI Mavic Air. As a recreational drone pilot, I felt it was my duty to learn some basic rules so I didn’t hurt anyone or get into trouble. So I read my manual and did some research — thanks, Google! — to find out what I could and couldn’t do, and where I could and couldn’t fly. My research told me that I should never fly above 400 feet, and I should never fly within 5 miles of an airport.

Because I live in the Washington, D.C., area, my drone flights were severely restricted. There is a 15-mile ring around the city where no drone flights are permitted without FAA authorization. Even if you are outside that zone, there are three major airports in the metropolitan area, as well as several military bases and general aviation airports.

I hadn’t really had a chance to see what my drone could do until I decided to bring it on a Caribbean island vacation. I was absolutely blown away by the footage I was able to capture with this drone. NOW I was hooked.

As a video producer, having a drone is a game changer. Places I never dreamed of getting shots from (unless I was renting a helicopter and working on a Hollywood film) were now accessible to me … with a drone that cost less than $1,000 … that I could pack in my carry-on luggage.

Now that I was a drone convert, I wanted to be able to use my drone for commercial shooting. Again, I knew that I had to do the right thing and become a certified drone pilot if I wanted to use my drone commercially. (Working for an aviation association, I knew that I needed to take FAA regulations seriously). An FAA Part 107 certification would enable me to turn my hobby into a tool for my career.

Studying for and passing the FAA Part 107 exam was surprisingly simple, even for me. My first step was to download the FAA study guide (bit.ly/Part107StudyGuide), which included about 80 pages of information about basic aeronautical information, such as METARs, weather patterns, and airspace designations.

Even though I didn’t have any other pilot certifications, I already had an interest in aviation, which helped me when reviewing the study material. I learned a lot by watching air traffic using an app called FlightRadar24. A friend who is also a Part 107 pilot served as a mentor and helped me prepare for the test.

The test itself consisted of 60 multiple-choice questions. I took the test at a PSI Testing Center that was located at a small airport in southern Maryland. (You can find your closest testing center on the FAA website.) You have up to two hours to complete the test, but it only took me an hour.

For more information about the process of becoming a Part 107 pilot — whether you’re a first-time pilot like me, or an existing pilot — see figure 1. You can also get all the information you need by visiting bit.ly/Part107Pilot. For a current pilot, the process is pretty simple. Because you already know the aeronautical material, you basically have to learn the drone-specific information.

After spending a total of about 12 hours preparing for the test, which consisted of studying the FAA’s Remote Pilot – Small UAS Study Guide and taking a day-long course taught by an FAA-certified instructor, I’m happy to say that I passed on the first try.

I am now certified for the next 24 months, and I can fly commercially. I’m excited to see the opportunities this will open for both me and HAI.

Figure 1. FAA Requirements and Process for Becoming a Part 107 Pilot