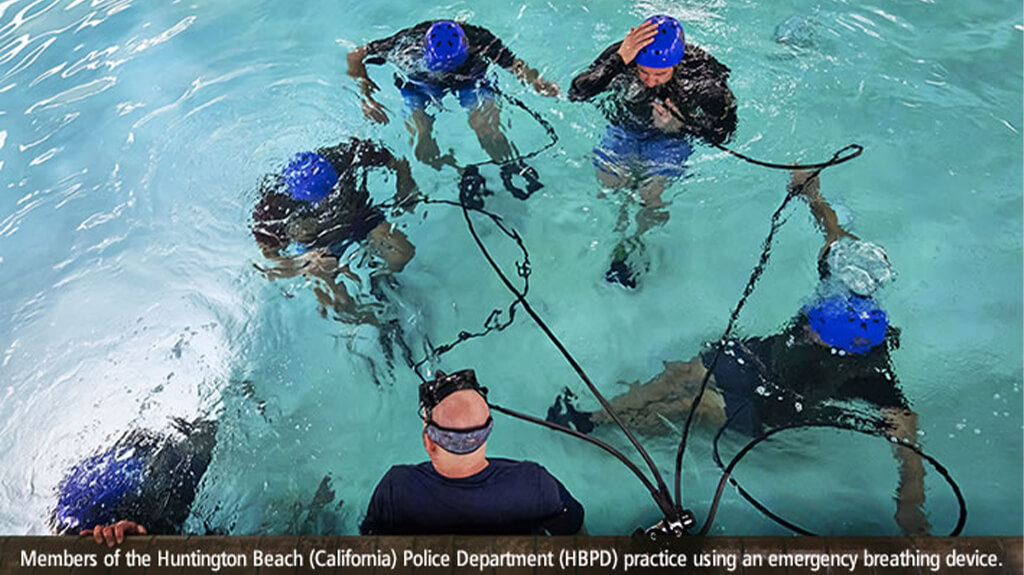 Learning to Survive a Helicopter Ditching

Ditching a helicopter in water isn’t an ideal way to end a flight, but as with everything flight related, training for such an eventuality improves your ability to, if not walk, at least dog-paddle away as safely as possible.

Depending on the environment, flight regime, equipment, skill, and luck, a water landing might mirror a ground landing and result in the aircraft resting comfortably upright on floats in placid water. Then again, elements of the environment, regime, equipage, skill, or luck might fail and you could find yourself in an inverted aircraft sinking in dark, stormy seas. Your fate might then rest entirely in your own hands—a destiny much more in your control if you’ve trained for that possibility beforehand.

I’ve recently flown several missions over the Gulf of Mexico. Even though I was wearing a life jacket and the aircraft had floats, when you fly over miles and miles of water, you do wonder how you would fare in a ditching incident.

With those experiences in mind, I audited “Aviation Survival and Egress Training with Emergency Breathing Devices,” a course teaching the skills needed to survive a helicopter ditching. The class, provided by Survival Systems USA of Groton, Connecticut, as part of HAI’s professional education program at HAI HELI-EXPO 2020, was a packed day that included both classroom lecture and in-pool practice. 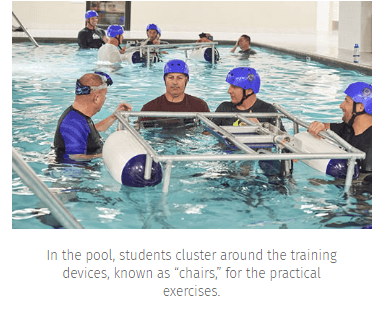 For the lecture, held in a meeting room at the Anaheim Convention Center, videos were shown, procedures were explained, notes were taken, and a test was given. Unlike many classes I’ve attended, the students were clustered toward the front of the room—not the usual hanging around the back rows, half listening, half checking Facebook or sports scores. I guess when you’re training to save your life, the Internet can wait.

One thing you realize when you begin egress training: there’s a lot of medical information involved, born of the interrelated physics of air pressure and water pressure and your body’s responses to each. And frankly, it’s all bad news.

How’s your knowledge of arterial gas embolisms? They’re the result of air in your lungs bursting out of tiny alveoli, where that air normally exchanges its oxygen for carbon dioxide. (Blame the ruptures on the interrelated physics.) If the alveoli are ruptured during your time escaping an underwater emergency, bubbles of air can enter your bloodstream and move on to block blood flow in the brain or lungs. Neither result is good and, by the way, the two can occur simultaneously.

Ever heard of pneumothorax? That’s when those bubbles escape into the space around the outside of the lungs. Air that collects inside your chest but outside your lungs can form large bubbles that compress the lungs and, thus, reduce the volume of air they can contain. Mediastinal emphysema is a pocket of air, again from ruptured alveoli, that forms adjacent to the heart, reducing its ability to pump.

At this point, you’ll have covered four medical conditions related to underwater egress that can range from painful to debilitating to fatal.

How do you avoid those conditions? The very abbreviated answer is to exhale as you rise through the water. By allowing breath to escape your lungs during your ascent, you prevent overpressurizing the lungs and damaging the alveoli. But first, you’ve got to get out of the aircraft.

Thus far, you’ve experienced no more than a chilly meeting room and some hot coffee. Now, it’s time to really learn how to survive an emergency egress—so, grab your swimsuit and your enthusiasm for introducing water into your sinuses, and head to the pool.

Once acquainted with the breathing device, the HBPD officers practice using it not just underwater but also inverted, surfacing afterward for a critique of their performance.

Once acquainted with the breathing device, the HBPD officers practice using it not just underwater but also inverted, surfacing afterward for a critique of their performance.

In addition to techniques for escaping a fallen aircraft, some of the training is about what you should do before the aircraft and the water meet. One key tip is to memorize a few details about the aircraft interior: potential handholds, doors, kick-out window exits, and any other useful features that can help you orient yourself. While submerged in roiling water. In the dark. In an aircraft gone topsy-turvy.

Identifying the exits is just the first step. It’s also important to understand how they relate to other features, as you may need to use physical cues such as the number of seats between you and the exit to find it in a dark or inverted aircraft.

Another tip: if your aircraft is headed for the drink (pond, lake, ocean), cinch yourself tightly into your seat—as tightly as you can—and assume a crash position. You’ve seen the illustrations on the safety card on airliners, right? If your restraint is a single lap belt, those illustrations are good. If you’re belted with one or more shoulder harnesses, reach up, cross your arms as you grab the harness on each side of your neck, and tuck your chin into the resulting “V” of your crossed arms.

There are several modifications of crash positions based on the aircraft and the harness system you’re in, and plenty of other bits of wisdom and advice dispensed during class, so I suggest you take this course from Survival Systems USA, or a similar course, to learn more. For now, though, let’s take these two pieces of advice—know the aircraft and assume a crash position—and head to the pool.

The in-pool training includes becoming familiar with the sensation of being inverted in water, where, indeed, that water will flood your sinuses. It’s an uncomfortable feeling, and when you surface you’ll expel the water, but it’s important to experience the non–life-threatening nature of that discomfort so you won’t be distracted by it when your attention will be better focused elsewhere. 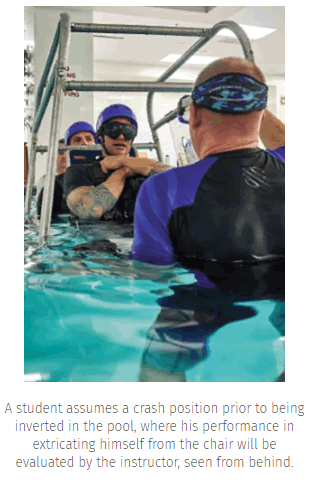 You’ll gain that experience as you hang upside down from the pool’s edge and, subsequently, while belted into a cagelike training device known as a “chair,” with and without an emergency breathing device (EBD). The chair is constructed of aluminum tubing as a rough simulacrum of a helicopter—very rough—providing within its skeletal frame merely a seat with a harness and window frames to which a clear acrylic panel can be loosely affixed on the left or right.

Unlike real-life conditions, the water in the well-lighted pool facility is warm and the bottom barely four feet below the surface. But despite being in a hotel pool with no helicopter in sight, you’ll learn the procedures you’ll need to know in a real ditching.

In all scenarios, one key piece of advice is to take in as many deep breaths as you can just before you become submerged. In our ­anxiety and panic, we might tighten up and forget that we’re going to need all the breath we can hold, so get it while the getting is good.

During the in-pool training, you’ll be dunked, flipped, get water in your sinuses, and sometimes all three during one exercise. You’ll practice using an EBD. Sometimes you’ll do all of the above while wearing opaque goggles to mimic an egress in the dark of night or in deep waters. 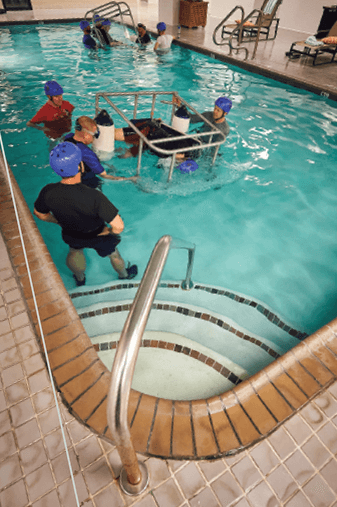 Survival Systems USA convened class in the indoor pool at the Hilton Hotel adjacent to the Anaheim Convention Center.

Part of the training is simply experiencing, understanding, and enduring these conditions so you’ll be less rattled when you experience them during an actual ditching. Stay calm, the instructors advise. Being agitated can lead to doing the wrong things, or the right things in the wrong order. The more time and energy you waste, the less oxygen you have to make your escape.

Over and over you go, literally and figuratively, from both poolside and in the chair. In each exercise, an instructor monitors your actions, which, at times, means your intentional inaction. You see, immediately post-impact the best advice generally is to, believe it or not, allow any tumbling of the aircraft and rushing of water to settle down before releasing your harness and making your escape. Releasing too soon exposes you to more disorienting tumbling and rushing.

Despite the discomfort, degree of concentration, critiques, and serious discussions, there’s a lot of smiling and chatting during the training, though I do discern a tinge of nervousness, and rightly so—the students are practicing to save their lives. Plus, they’re aware of perhaps oversharing with their fellow students (think clearing those sinuses after surfacing).

The instructors wrap up the class with a question-and-answer session to ensure that participants retained the lessons and to clarify any details and decisions covered in the course. In the interest of safety, what with breathing compressed air and the other discomforts of the training, the students aren’t released until they’ve been monitored for any symptoms of injury or illness. Once back home, they’ll receive in the mail a certificate of completion or, if needed, a detailed letter of compliance.

All in all, a valuable, if not entirely pleasant, way to spend the day.

There’s so much more to surviving a water landing than I’ve covered in this article, but if you can at least keep the following points in mind, you’ll have improved your chances of surviving this other kind of IMC—inadvertent marine conditions:

Even if neither your company policy nor federal regulation requires it, if a water ditching is a risk where you fly, training for that possibility is a great idea.