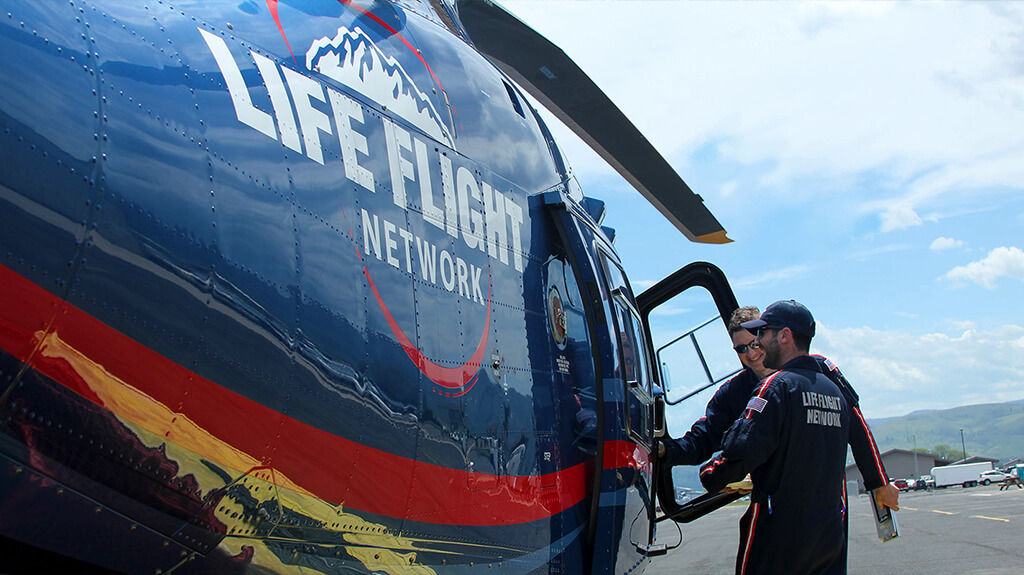 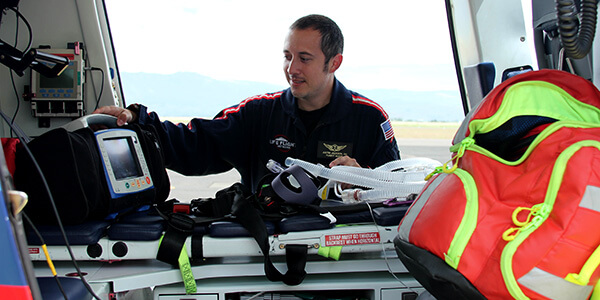 A picturesque rural town of 14,000 in northeastern Oregon, La Grande is nestled in a fertile farming and ranching valley surrounded by snow-tipped mountains. The community is fairly isolated, an hour’s drive from the next town of similar size, Pendleton, Oregon, and hours away from larger communities. La Grande is the county seat for Union County, which has a total population of about 25,700 occupying slightly more than 2,000 square miles.

Just west of the popular Hells Canyon National Recreation Area on the Snake River, the region attracts serious outdoor enthusiasts year-round. Warm in the summer and snowy in the winter, it’s a haven for those who hike, bike, camp, climb, and operate all-terrain vehicles (ATVs), off-road motorcycles, and snowmobiles.

La Grande’s rural, isolated location, paired with its attractiveness to outdoor recreationists, makes helicopter air ambulance (HAA) service a necessity here. The ability to quickly respond and transport out of rugged and remote locations to appropriate medical care is fundamental to the community’s health and well-being.

Health-care services for La Grande and the surrounding area are provided by Grande Ronde Hospital. A Level IV trauma center and designated critical-access hospital for initial emergency care located within La Grande, it provides patients with evaluation, stabilization, and advanced-trauma life support services prior to transport to a center offering more-advanced care (trauma centers range from Level I, which provides the highest level of care, to Level V).

A quick look at the map demonstrates the La Grande community’s need for helicopter air ambulance services. The next-highest-level trauma centers, both Level III, are 42 miles northwest in Pendleton, Oregon, and 50 miles north in Walla Walla, Washington. The closest Level II is 129 miles southeast in Boise, Idaho, while the closest Level I trauma centers are more than 195 miles to the west, across the Cascade Mountains in Portland, Oregon.

To meet the need for faster access to higher-level care, Life Flight Network began serving La Grande in 2011 as the region’s first HAA operator. Fixed-wing operator AirLink Critical Care Transport had previously operated out of the Eastern Oregon Regional Airport (KPDT), 7 miles south of the hospital. Grande Ronde Hospital supported the new air ambulance provider by constructing a $1.2 million helipad at the hospital in 2012, increasing immediate access to the facility for airlifted patients. The results were immediately evident.

“When you choose to live in a rural community, you accept that specialized services available in larger communities are not as quickly available to you,” says April Brock, emergency department manager at Grande Ronde Hospital. “Having Life Flight Network allows us to get people in our community to that care. Since the service started, we’re seeing patients getting to the lifesaving interventions they need, whether that be here or at a higher-level-of-care facility, in a more timely fashion.” 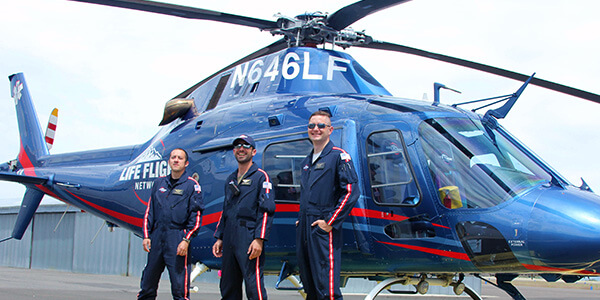 Based in Aurora, Oregon, Life Flight Network operates more than 25 bases across the Pacific Northwest and Intermountain West regions, mainly supporting, with 33 helicopters and 9 airplanes, small communities in Oregon, Washington, Idaho, and Montana. The air ambulance operator employs approximately 650 people, including all clinical and aviation teams, providing a complete HAA solution to communities. It’s accredited by the Commission on Accreditation of Medical Transport Systems and the HAI Accreditation Program of Safety for helicopter air ambulance operations.

Life Flight Network began operating out of Portland’s Legacy Emanuel Hospital in 1978, often flying out to rural areas. From this experience grew a new idea: the community-­based HAA program. Placing bases in remote areas rather than urban centers improved response times and made maximum use of the Golden Hour.

Today, Life Flight Network’s bases are strategically placed throughout the region, with an average 175-mile range per base, in order to provide rapid access to intensive care. Helicopters can fly farther if needed. Bases with airplanes utilize those resources for facility-to-facility transport beyond a helicopter’s range.

Because of the remoteness of the communities and potentially limited resources at the closest hospital, Life Flight Network’s teams have the ability to perform a comprehensive array of intensive-care medical functions during flights. Each aircraft acts as a mobile intensive-care unit, equipped with a Zoll Propaq MD cardiac monitor/defibrillator, an LTV 1200 or ReVel ventilator, an Alaris MiniMed infusion pump, a Belmont Buddy Lite fluid warmer, two units of blood, circulatory support devices (intra-aortic balloon pumps), and a C-MAC PM video laryngoscope.

In addition, Life Flight Network maintains dedicated teams of neonatal and pediatric registered nurses and respiratory therapists on continuous standby. These teams provide neonates and children with care equivalent to what they would receive as patients on a specialty critical-care unit.

“Additionally, our teams recognize the unique needs children bring to the transport environment and are adept at making patients feel comfortable, safe, and well cared for during what can be a challenging time,” says Greg Plenert, Life Flight Network director of marketing. 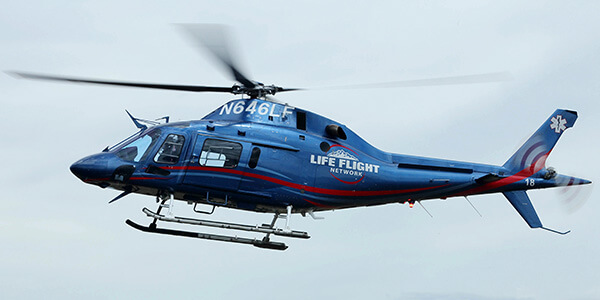 Life and Trauma in La Grande

A helicopter pilot, fixed-wing pilot, nurse, and paramedic are on shift at all times, with the medical crew trained to work on both aircraft. Pilots typically work 12-hour shifts while medical crews work both 12- and 24-hour shifts, depending on schedule needs. The Life Flight Network heated hangar provides protection for the aircraft and housing for the crew during shifts. The living quarters offer a common room with full kitchen, dining room, living room, work­stations, and individual private rooms with beds.

Folks living in La Grande and the surrounding area generate their share of typical HAA scene calls: cardiac arrest or distress, strokes, respiratory distress, and automobile accidents. In addition, the teams see a great deal of farming injuries (typically mangled limbs or crushing trauma from farming machinery) and recreational accidents. The latter are mainly head-and-limb injuries and heat- or cold-exposure cases among those taking advantage of the area’s wide variety of recreational opportunities. And then there’s hooky bobbing.

“I had no idea what this thing was until I moved here,” Life Flight Network Pilot Mike Martin says. “Hooky bobbing is pulling any sliding thing behind a moving vehicle—car, ATV, tractor, you name it. Usually there’s someone either holding on to the vehicle or in the sliding thing. Think tractor pulling a bathtub. We get a few responses to those kinds of accidents each year.” [Editor’s note: please don’t try hooky bobbing; any activity in which practitioners commonly require air ambulance services is dangerous.]

Because of the remoteness of the terrain, the La Grande Life Flight Network base partners with local search-and-rescue (SAR) efforts. Life Flight Network crews can transport SAR team members to a location and then aid in the search from above, even using night-vision goggles when appropriate. When the missing person is found, the crew can insert rescuers and wait in a safe location for the SAR teams to bring the patient to the aircraft. Once secured, patients can be taken to a number of medical facilities, depending on need, thanks to the helicopter’s range and speed.

When responding to the most remote areas, Life Flight Network crews can often find themselves on their own, a situation not uncommon for rural HAA operators.

“There are many times where we’re the first responder in more remote calls, arriving before any ground rescue or an ambulance has reached the patient,” says Life Flight Network Pilot Emily Hiller. “We experience how very vital helicopter EMS is here all the time. Sometimes we’re literally the difference for a positive outcome.”

It can take hours for ground rescue to get to some locations. While Life Flight Network personnel must receive permission to leave the immediate helicopter area and the crews aren’t trained to extract or carry victims any great distance through rough terrain, they can immediately administer aid and transport if the patient is nearby and easily reached.

Where Life Flight Network takes patients depends on the patients’ needs. Cardiac patients are flown directly to Walla Walla, the closest cardiac intervention center. Automobile accident victims typically go 75 miles north to Richland or Kennewick, Washington, or south to Boise, Idaho. Stroke victims will be taken to the closest facility with CT or thrombolytics capabilities, which includes most critical-access hospitals.

“We can’t bypass a facility with an appropriate level of care, but we can be asked to stand by while a patient is stabilized so we can provide further transport,” says Benjamin. “The hospitals in this region do a really good job of using the resources they have to determine when to send patients on.”

Although the majority of Life Flight Network’s flights entail interfacility transport to higher-level hospitals, a helicopter is often requested to respond to accident scenes and other ambulance calls, says Benjamin.

“We would rather be en route to help get service to the patient as quickly as possible,” he explains. “We’re equipped with more lifesaving equipment on board than most ground services. We can meet an ambulance on the way or at the hospital, shortening the time to the final medical facility.”

When the weather closes in and the helicopter is grounded, Life Flight Network continues to support advanced care. The service’s nurses and medics often go with local ground-transportation partners on critical calls when the helicopter can’t respond.

“The Life Flight Network medical teams’ skills are much more advanced than those [of the responders] on board our partner ground-transportation services,” Grande Ronde’s Brock says. “With them, we can provide an even higher level of service than otherwise, even if we have to go by ground.

“Rural communities are special in that the relationships we develop between our transport and medical partners are like no other,” Brock adds. “We know each other at a level that’s not common in larger communities, that allows us to improve process on a regular basis and share our resources to support our communities. Life Flight Network is a very big piece of that here in La Grande.”