By Rotor MediaJanuary 14, 2022No Comments

Helicopter Association International (HAI) is pleased to announce United States Coast Guard Lieutenant Commander Travis Christy, an MH-60 aircraft commander, as the recipient of the Salute to Excellence Pilot of the Year Award. The award, presented by ROTOR Media, recognizes an outstanding single feat performed by a helicopter pilot during the year or extraordinary professionalism over a period of time. It will be presented March 7 at HAI HELI-EXPO 2022 in Dallas, Texas. 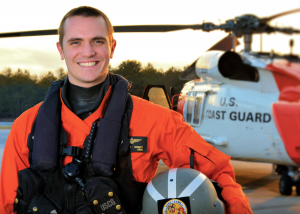 Christy received his wings in 2013 and has since helped save the day and numerous lives at sea, inland, and in post-disaster support efforts.

One such day was March 2, 2021. At 8 pm, a call came into US Coast Guard Air Station Cape Cod in Massachusetts. Atlantic Destiny, a 140-foot fishing vessel with 31 onboard, had caught fire and was taking on water more than 200 nautical miles east of Cape Cod.

Facing darkness, freezing cloud layers, and turbulent winds, Christy set out for the disabled vessel. Shortly after the aircraft arrived on scene, the decision was made to evacuate most of the crew. After a Royal Canadian Air Force helicopter hoisted six crew members, Christy maneuvered his helicopter into position to begin hoisting survivors. Battling 40 to 60 knot winds and 33-foot waves, Christy and his crew hoisted eight survivors from the dark, pitching vessel.

With a full cabin, Christy departed and flew 125 miles through pockets of unidentified precipitation to Yarmouth International Airport in Nova Scotia, Canada, where the survivors were transferred to awaiting rescue personnel.

Christy rose to the occasion again on May 30, 2021, when he and his crew responded to medevac an injured skier at 4,000 feet on Mount Washington in New Hampshire. The skier had fallen 400 feet through a boulder field and suffered both severe head trauma and a spinal injury. No other aircraft in the area could support the mission due to the patient’s high-altitude location and reported 1/16 to zero statute mile visibility.

Christy flew under an IFR flight plan to Eastern Slopes Regional Airport near the injured skier. From there he identified a safe route and briefed his team on how they would transit the remaining 20 nautical miles to the injured skier, including an inadvertent IMC plan. The aircraft followed the road, navigating around clouds and mountainous terrain at 40 to 70 knots and altitudes ranging from 100 to 200 feet.

Once on scene, Christy used the aircraft’s direction finder to pinpoint the injured skier’s position. As the helicopter hovered near its maximum available power, Christy served as the safety pilot while the patient was hoisted via litter. Once the skier was safely on board, Christy and the crew expeditiously transported the patient to Maine Medical Center.

In August 2021, Christy was also instrumental in discovering and rescuing eight people and two pets from a severely damaged beach hotel on Grand Isle, Louisiana, while supporting post-hurricane rescue efforts in the wake of Hurricane Ida.

Throughout his many years with the Coast Guard, Christy has found himself in the midst of seemingly insurmountable challenges. Yet through employing careful judgement, aviation skill, and trusted leadership, he has made positive differences for countless lives.

The Pilot of the Year Award will be presented during HAI HELI-EXPO 2022. HAI HELI-EXPO®, the world’s largest helicopter trade show and exhibition, will be held at the Kay Bailey Hutchison Convention Center in Dallas, Texas, March 7–10, with the exhibit hall open March 8–10. For more information on HAI HELI-EXPO 2022, visit heliexpo.com.