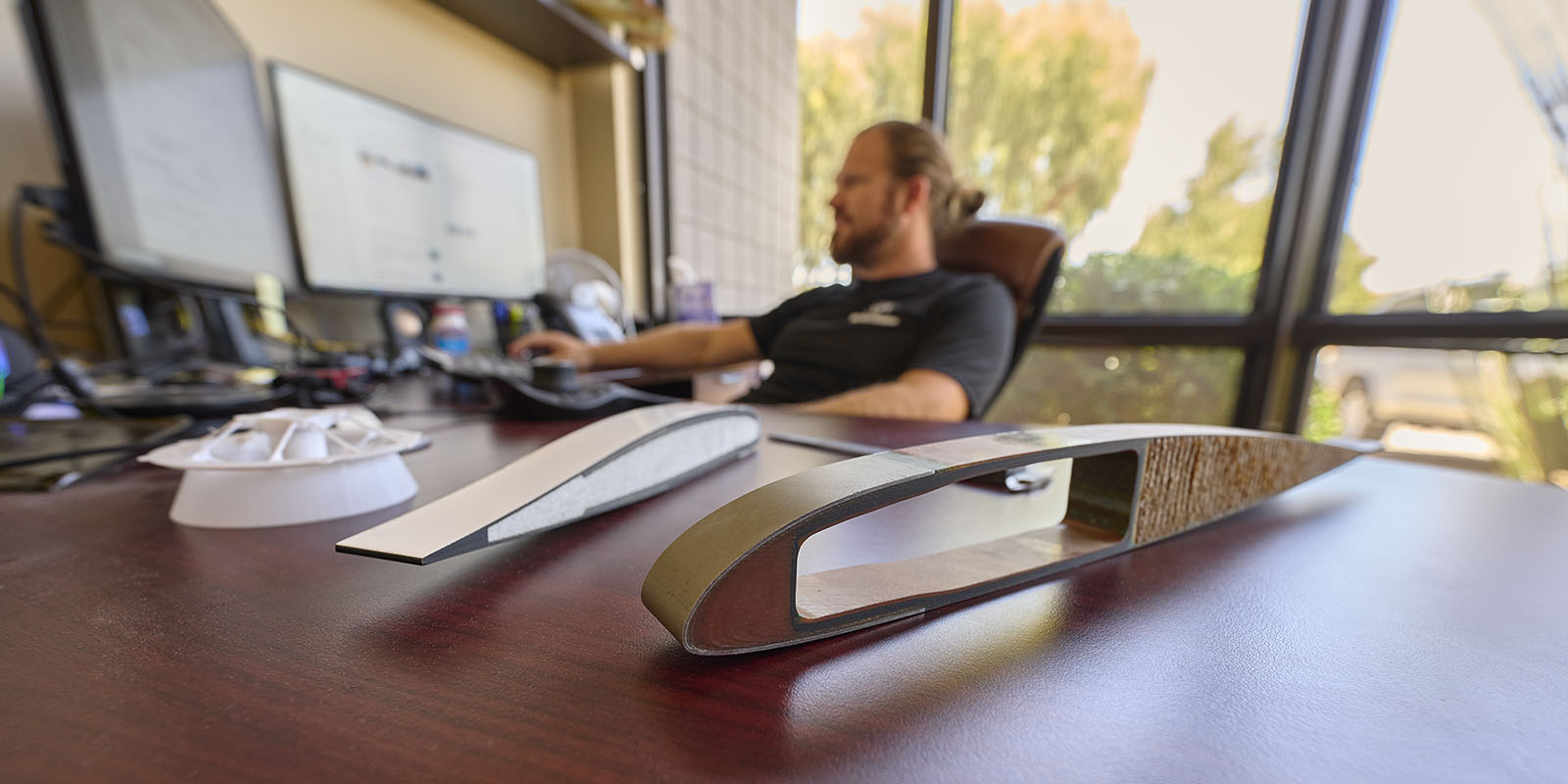 By Mark BennettOctober 20, 2022No Comments

Above: Van Horn Aviation design engineer Chris Gatley brought with him 13 years of experience when he joined the company in 2019, including work on main-rotor blades for the AH-64D/E Apache, foreground.

All photos by Mark Bennett

What goes into making a rotor blade? A lot more than you might think.

Rotor blades are designed for performance. But they are also designed to be manufactured, and how they are manufactured is probably more involved than you think.

Rotorcraft blades are some of the most complex purely mechanical items on a helicopter. They might appear as a seamless piece, but their construction comprises myriad components, shaped and joined, inspected and tested. The end result must be able to endure a range of environments and abuse, survive being flung around a hub hundreds of times per minute, twisted up, then down at that same rate, while supporting its share of an aircraft ranging from less than 900 to over 120,000 lb. 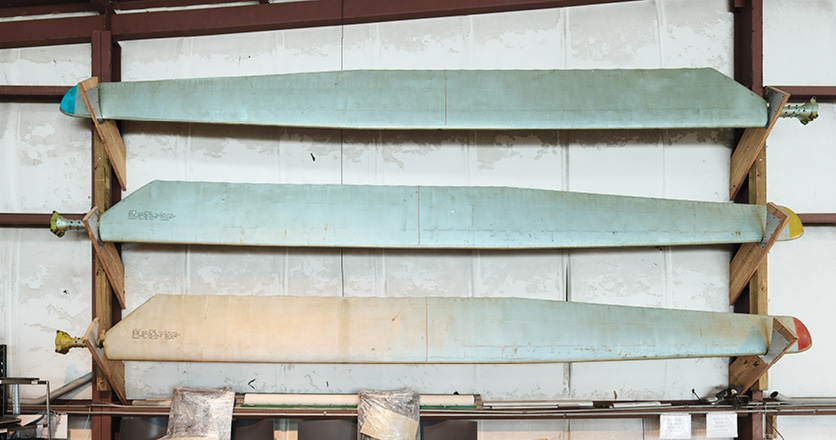 What is possibly the only extant set of Sikorsky S-51 main-rotor blades not mounted on a helicopter currently rests on a hangar wall at Vertical Aviation Technologies in Sanford, Florida. The blades were manufactured in 1952.

Long before you start hammering together a rotor blade, much design work is required across manifold disciplines.

At the dawn of rotary-wing flight, it made sense that existing fixed-wing airfoils, developed with pencils and slide rules, guided the design of helicopter rotor blades. Likewise, wood-and-fabric construction was the logical choice.

Those airfoil designs and construction techniques were found wanting, however.  For instance, air pressure changes in hollow, fabric-covered trailing edges would change performance during flight, and moisture from rain, or even just humidity, could alter the weight of blades disproportionately on a single helicopter. Moreover, the inherent difficulty of making every blade for a specific aircraft model the same size, shape, and weight was so severe that blades had to be installed and, when needed, replaced in complete sets.

Soon, legacy designs yielded to the results of intensive (and ongoing) research into not just the shape of airfoils—the 2D cross section—but also a full 3D optimization of the blade from root to tip, calculated with computers and verified in wind tunnels. Construction materials and manufacturing processes progressed similarly. (See “Airfoil Design,” at bottom of article, for more on airfoils.)

As It Ever Was

Vertical Aviation Technologies has been building kit versions of the Sikorsky S-52 helicopter, including the main-rotor blades, for 30 years in their Sanford, Florida, facility. 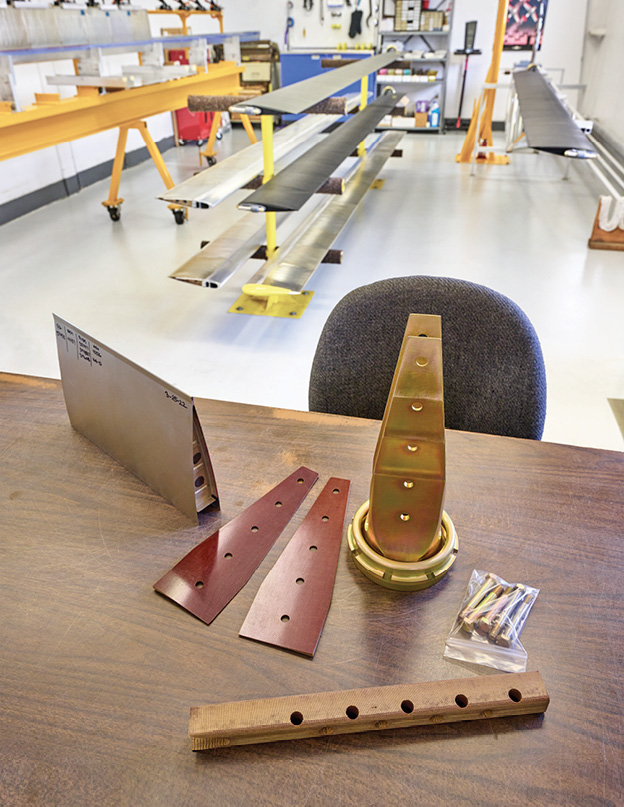 The aircraft sported the first all-metal blades on an American helicopter, a design later revised for more consistent manufacturing, better performance, and longer life. The blades now comprise about 138 components, most of them manufactured on-site by Vertical Aviation, and all of them assembled, painted, and balanced per the company’s FAA-approved process specifications.

Those components include an extruded aluminum spar, which also functions as the leading edge; trailing-edge pockets of aluminum sheet (15 per blade in three different configurations); phenolic spacers; custom blade-balancing hardware; and a steel cuff with a unique threaded collar for attaching the blade to the rotor head.

There have been other improvements over the decades, mostly in adhesives and paint, but the basic design remains safe and effective. 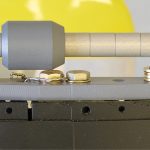 Beneath the end cap on each blade is this blade balance weight system. 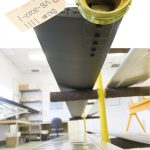 The root end of two S-52L main-rotor blades, the lower one with just the pocket attached, the upper one complete with its unique threaded cuff nut for attaching the blade to the rotor head. 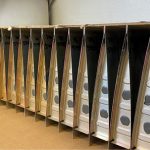 Everything Old Is New Again

When Van Horn Aviation decided to design replacement main-­rotor blades for Bell 206 helicopters, they opted for a NASA airfoil and modern materials. The result is performance that matches or surpasses that of the factory blade, with a service life four times the original’s.

Technicians at Van Horn Aviation, on the left, piece together plies of carbon fiber and other materials for Bell 206 tail-rotor blades, and on the right, lay up a main-rotor blade for the same aircraft model.

The Van Horn Aviation blade is seriously more complex than its sleek exterior might suggest. Beneath the paint and behind that full-length abrasion strip are layers of precisely laid carbon-fiber fabric of varying formulations, dimensions, and locations. And beneath the carbon fiber is a core of structural foam cut by computer-controlled machinery.

Designing a composite blade to replace an aluminum one also requires engineering and manufacturing the components used to attach the composites to the metal root, creating and bonding the abrasion strip, incorporating track-and-balance adjustment features, etc.—every item and process different from the original.

Even after the composites are laid up, the titanium machined and coated, and all the components bonded and cured in an autoclave, ahead are still final machining, painting, and quality control. No wonder it takes so long (nearly seven weeks, start to finish) to make a blade! 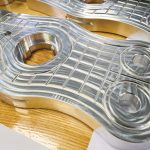 Titanium root fittings are machined in-house, as are all custom metal components. 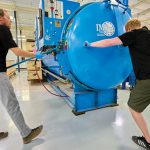 One of the autoclaves, where a blade will spend six hours curing, is secured. 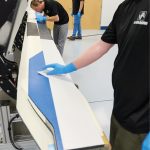 While some carbon-fiber panels are the length of the blade, others are mere inches across, and all must be placed with precision.

When You Have to Lift a Lot, You Need a Lot of Lift 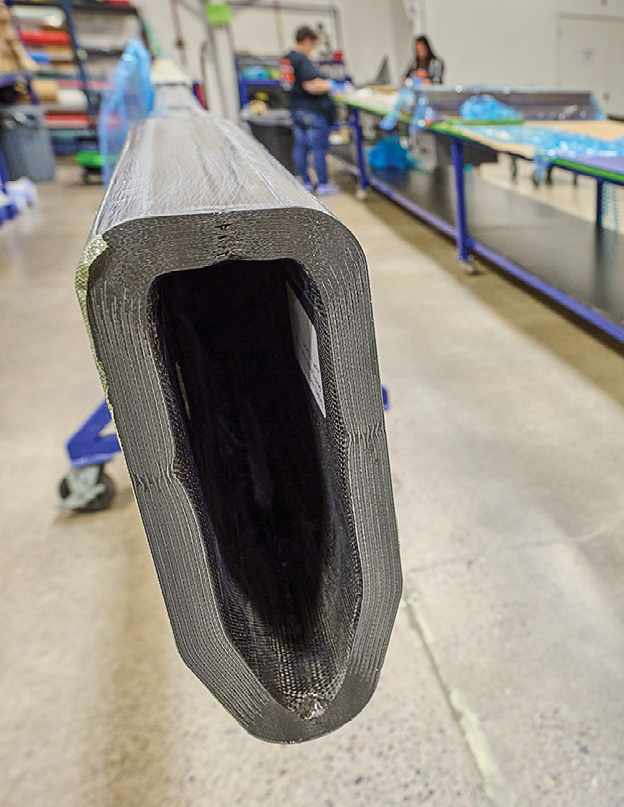 More than 300 individual plies, a mix of unidirectional and woven carbon and glass fibers, are hand laid to form the spar for the composite version of the S-64 main-rotor blade.

The CH-54 entered the world of heavy lift as a military helicopter in the early 1960s. The civilian version, the S-64, capable of carrying 17,636 lb. (8,000 kg), came not long after and is now manufactured and supported by Erickson.

In addition to the hundreds of changes Erickson has made to the aircraft over the years, it has recently designed new S-64 main-rotor blades, which are manufactured in the same facility used to support the legacy blades still in service around the world.

When you design a new blade for an existing airframe, you consider every available, practical improvement. Thus, the new blade is of composite construction, with a longer service life and a more efficient airfoil design—lifting capacity is now 20,000 or 25,000 lb., depending on the aircraft model—but is a bolt-on replacement for the original, mostly aluminum, blades (in sets of six, of course).

To make each new 32-ft.-long blade, an aluminum mandrel is ­meticulously wrapped by hand with over 300 layers of carbon- and glass-fiber mats, with more than 100 leading-edge weights encased between layers of composites, which are then cured for 19 hours in an infrared oven. Next, the honeycomb trailing edge, the skins, and trim tabs are added. Then, all are bonded and cured together for 10 more hours.

Then, as with most rotor blades, no matter the materials or manufacturing, there are many more steps before the blade is ready to hang on an Air Crane—machining, adding hardware, painting, balancing—and, at every step, quality control. 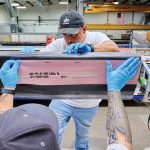 Plies are positioned and aligned with the help of lasers, but it still takes sharp eyes and steady hands. 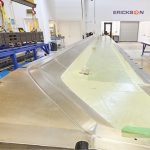 Once components are in place, the uncured S-64 blade is sandwiched between two 33-ft.-long, 16,000-lb. tools, wheeled into the infrared oven, and after 10 hours the blade is ready … to continue its 24-day production process. 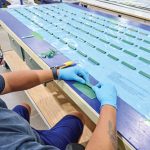 A technician applies adhesive laminate to 1 of the 100-plus leading-edge weights destined for a single blade. 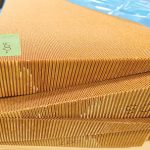 Beneath the skin of the trailing edge, wedges of polyamide honeycomb provide structural stiffness without undue weight.

What Binds Us Together

The industry has come a long way in the decades since practical helicopters joined the still-young age of heavier-than-air flight. Across that span, blade designs have yielded sleek shapes and smooth skins.

But those svelte exteriors hide surprising complexities of materials and joinery. Actually, here’s a fact that isn’t widely appreciated: except for root attachment hardware (if the ­design includes it) and minor hardware (such as, perhaps, a screw securing a weight pocket), ­almost every component of a main-rotor blade, whether predominantly metal or composite, is attached to other components with adhesives.

That’s right—helicopters stay in the air mostly thanks to glue.

Off the shelf or made to order? 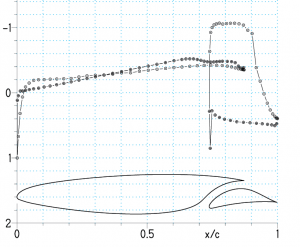 A pressure distribution graph that aligns an airfoil with the measurements obtained in a wind tunnel.

Deciding what you want from a rotor system is the critical first step in designing main- and tail-rotor blades. Overall performance values for the aircraft flow into questions such as, how many blades and how long can or should they be? Even at an early stage of design, many compromises must be accommodated. 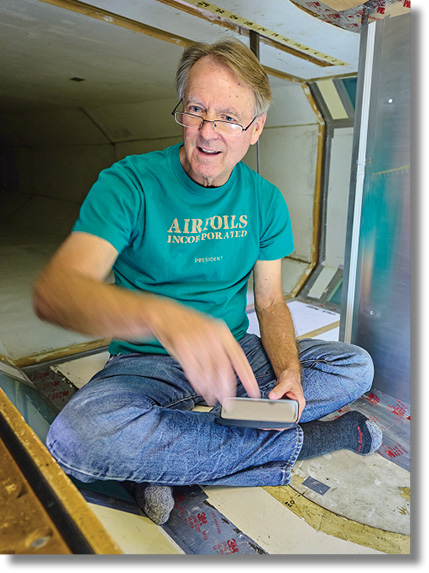 Dan Somers explains elements of airfoil performance and design while seated next to one of his airfoils in the Penn State wind tunnel.

With those decisions come the next tranche of questions. How much lift under what conditions? And how can we achieve that?

One possible solution is to select an airfoil design from among those developed over the history of rotary-wing flight, including those from NASA. Incorporating one of these designs requires skill, but because its performance is known, it can be a solid solution.

What’s becoming more common is creating custom airfoils that provide optimal performance for specific aircraft. Computer codes exist to facilitate the task, but if designing an airfoil were as simple as pressing a button, everyone would be doing it.

That’s where someone such as Dan Somers comes in. He worked for 15 years at NASA Langley Research Center and in 1980 launched Airfoils, Incorporated, advising aircraft manufacturers and designing airfoils for them.

Somers’s enthusiasm for his work was clear as he told me more (and more!) about how these precisely formed shapes keep hundreds or thousands of pounds airborne.

Yet, despite his decades of experience—or because of it—he says design is part science and part art. The truth comes out only when air flows over the wing.