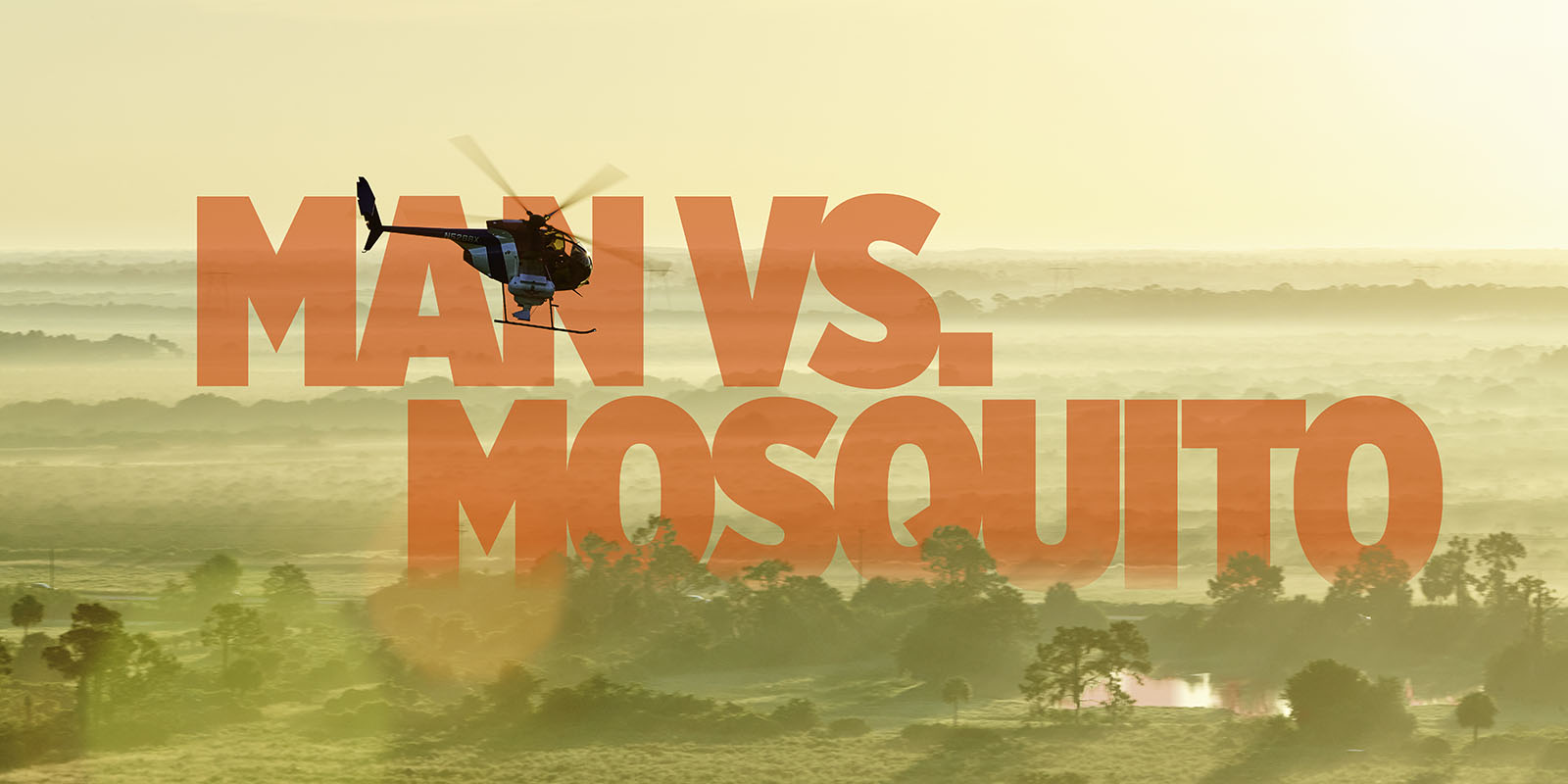 A Photo Essay by Mark Bennett

Another case of helicopters saving lives (in this case, human, canine, and equine ones).

We’ll be in the air by 0630, chasing a pair of helicopters into the rising sun, each loaded with larvicide, each intent on keeping this patch of Florida welcoming to humans by keeping it free of mosquitoes. 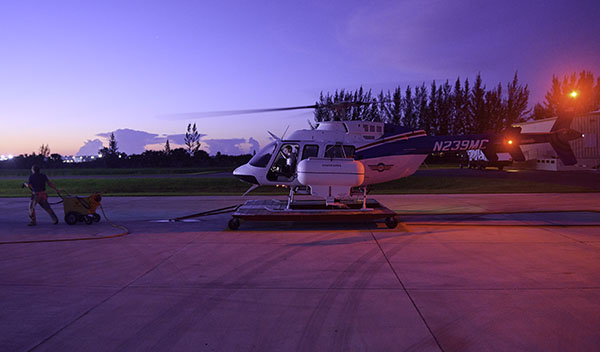 The scene plays out regularly across the state throughout most of the year. Helicopter crews might start before the sun, as we did this day, or they might launch at dusk and fly past midnight. They’ll go up against the pests as much as needed, when needed, their routes precisely planned and flown, in a never-ending battle of good versus bug.

More than 80 species of mosquitoes inhabit the Sunshine State. Many are merely unwelcome annoyances, leaving us with no greater injury than an itchy welt. Some feed only on nonhuman animals, and a few feed only on plants.

However, some species that feed on humans are potential vectors for diseases such as yellow fever, dengue, or the Zika or West Nile viruses. Some mosquitoes that feed on dogs or horses can spread heartworms or encephalitis, respectively.

Florida’s warm, wet environment has hosted mosquitoes for centuries, but serious measures to control them weren’t undertaken until their role in spreading disease was understood. Thus it was in 1925, for both public comfort and health, that the first of what are now 58 governmental mosquito-control organizations was formed in the state. In the 1960s, helicopters joined the fight.

In preparing this essay, I visited eight of those organizations that fight a common enemy across more than 5,000 square miles of forests, salt marshes, ponds, farms, golf courses, and neighborhoods. Why helicopters? Because their capabilities—mobility, agility, precision—essentially mirror those of their prey. 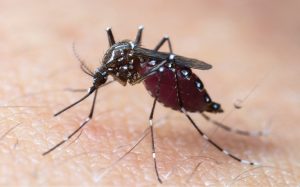 Mosquitoes can be more than disagreeable visitors to an exposed patch of skin—they are potential vectors for a range of debilitating, and potentially lethal, diseases in humans, dogs, and horses. (Paul Landau photo)

Not every mosquito-control program flies helicopters, and even for those that do, the aircraft are just one tool among many. But when a single aircraft can ­accomplish in 40 minutes what might take 10 trucks and crews four days, the value of rotary-winged assets is compelling.

The first step in controlling mosquitoes is reducing their opportunities to multiply.

That includes commonsense efforts to keep objects like unused buckets, discarded tires, or even bird feeders from providing mosquitoes a place to lay their eggs. But even if every human-created reservoir were emptied, Florida—frequently rained on, rimmed by salt marshes, and run through with springs and slow-moving rivers (hello, Everglades!)—has countless natural habitats in which mosquitoes can always breed.

Mosquitoes, however, are not always in need of control. It is important to determine which species are present and in what numbers. Remember, not all species feed on humans (or dogs and horses). There’s no need to eradicate nonpest mosquitoes, as these insects are part of the food chain for fish, birds, amphibians, and other insects. They are also pollinators.

The types and populations of mosquitoes are affected by temperature, humidity, rainfall, and tides, so inspections are carried out daily, by sampling water for larvae, checking for adults in traps, or by simply leaving an arm exposed while standing outside. Helicopters play a role by quickly transporting inspectors to distant traps or known environments, or to locations that might be near but otherwise difficult to access.

Another factor that figures into management plans is disease. Only certain species carry certain diseases, but the mere presence of those species does not, by itself, mean that disease is present. Thus, reports from hospitals, tests of trapped mosquitoes, and, for at least one mosquito-control organization, tests of the blood of chickens purposefully housed where they are exposed to mosquitoes are constantly monitored.

When intervention is required, people and equipment can be mobilized for attack on foot, by truck, or by air. If helicopters are part of the plan, a lot of planning goes into those operations.

Sophisticated computer programs are used to plot the areas needing treatment, and then exact flight paths are calculated to deliver the proper dose of materials, whether dry or liquid, depending on altitude, humidity, and prevailing winds. Those flight paths are loaded into dedicated avionics systems that control and track the flow of materials, overlaying that data with the track of the aircraft.

Mosquito larvae need water to grow and develop into adulthood, which means they are easier to target than adult, flying mosquitoes. The favored weapon is a ­bacterium, Bacillus thuringiensis israelensis (Bti), that, when ingested by the larvae, leads to a rupturing of their digestive tracts, killing them. Besides mosquitoes, Bti is injurious to only a couple other species of insects that, coincidentally, also spread disease. The bacterial agent is typically delivered in pellet form, flung outboard from hoppers on either side of the aircraft.

If the mosquitoes are not defeated as larvae, helicopters can apply plant-based poisons or synthetic versions of them. Booms jut out from the fuselage to deliver liquid to nozzles and fans that atomize it and spread the resultant mist.

Because the poisons are also harmful to bees and butterflies, very low volumes of these solutions are applied, and such missions are flown after most of those ­desirable insects are already bedded down for the night or not yet up in the morning. Fortunately for the mosquito hunters, evening and dawn are when mosquitoes are most active anyway.

Some sectors in our industry have more cachet than others. Dwayne Johnson probably isn’t going to play a mosquito-control helicopter pilot any time soon. But in Florida, I came away with considerable respect for the care and precision with which these flight and ground crews conduct their lifesaving missions. 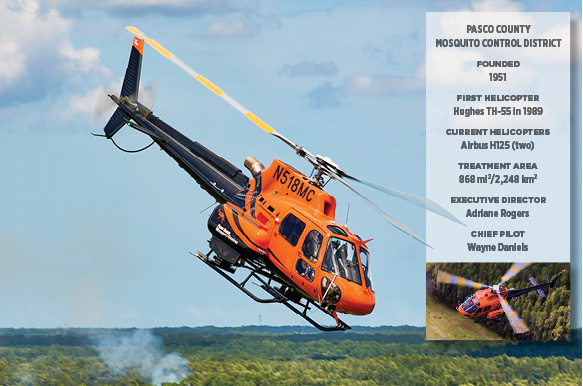 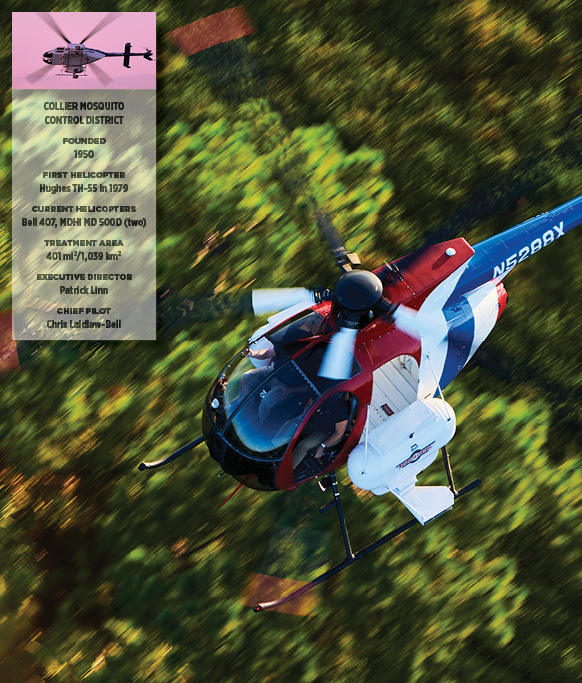 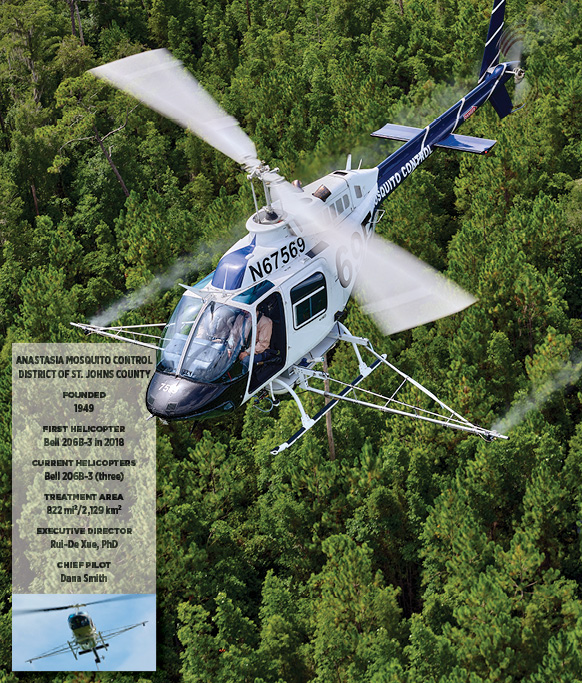 In contrast to Volusia, Anastasia Mosquito Control is the newest helicopter-operating program in the state, fielding its first of, now, three Bell 206B-3 aircraft just three years ago. Here, the crew calibrates their spray system, using mineral oil as a substitute for actual adulticide.

This Charlotte County UH-1H is owned by the mosquito-control organization but piloted by a deputy from the sheriff’s office, which owns and operates another Huey and an A Star, both of which can also be used in mosquito-control efforts. 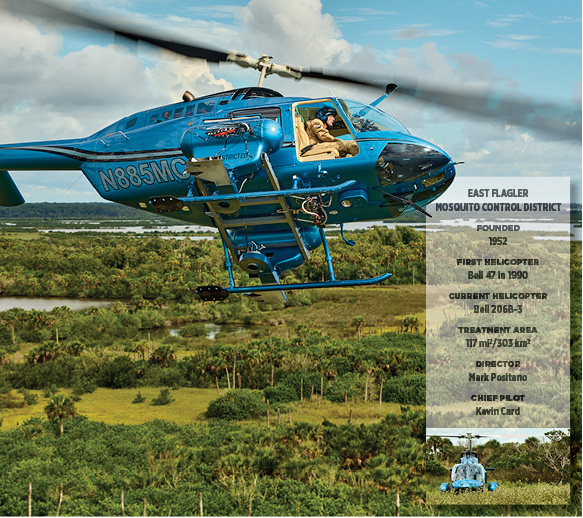 East Flagler has a single Bell 206B-3, which it uses for the three main roles of helicopters in mosquito control: inspection, larviciding, and adulticiding. 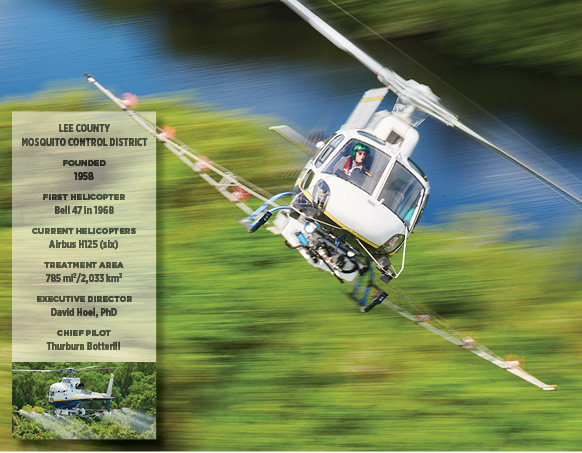 Lee County has the largest fleet of aircraft in the state, with both King Air and DC-3 fixed-wing assets in addition to its six Airbus H125 helicopters. 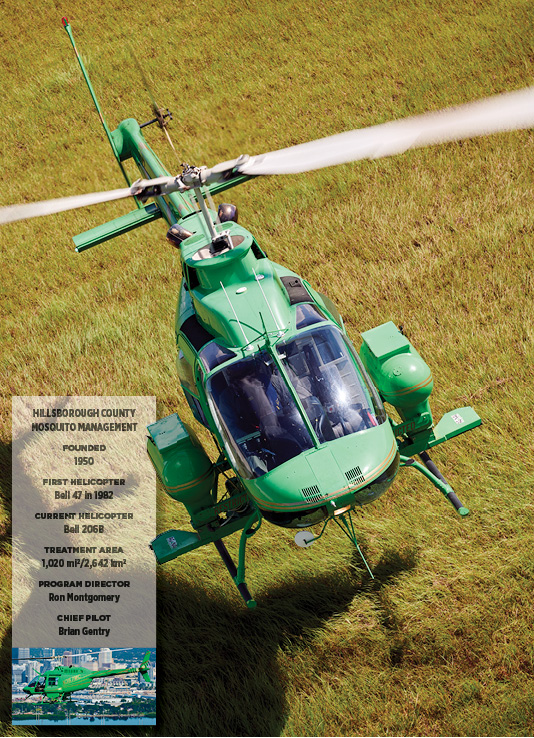 Hillsborough County encompasses over 1,000 square miles of terrain and water, including the city of Tampa, that is patrolled and treated using a single Bell 206B. 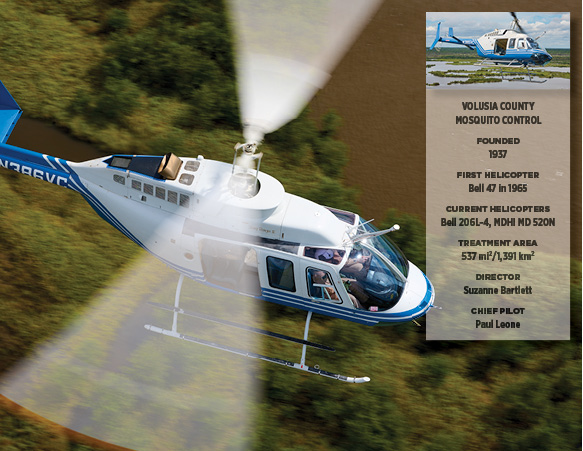 Volusia County began using helicopters for mosquito control 56 years ago, earlier than the others included in this essay, and currently flies both an MD 520N and, shown here, a Bell 206L-4 LongRanger.