Remembering HAI’s 2018 Pilot of the Year

The 2018 HAI Salute to Excellence Pilot of the Year, Maria Rodriguez of St. Thomas, US Virgin Islands (USVI), died in a helicopter crash on Feb. 15, 2021. 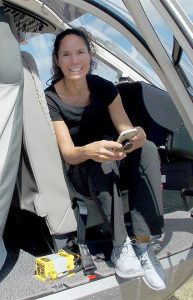 With her husband, she was co-owner of Caribbean Buzz Helicopters and Buzz Management and also flew as a pilot for the company. She flew former US President Barack Obama and former First Lady Michelle Obama in 2017 and became friends with country musician Kenny Chesney when she flew him on visits to the Virgin Islands.

In late summer 2017, Rodriguez’s home of USVI was in the path of both major Caribbean hurricanes—Hurricane Irma first, followed by Hurricane Maria a few weeks later. With roads impassable after Hurricane Irma, she walked from safe shelter to her home, which was battered and flooded but still standing. She hiked for an additional two hours to reach the airport. Her hangar was damaged, but the helicopters had survived unscathed. She rolled them onto the ramp and immediately began to fly support missions wherever she could. “Every evac flight started with tears,” says Rodriguez, “but ended with smiles!”

As Hurricane Maria bore down upon her home again, Rodriguez moved her helicopters to a reinforced hangar in Puerto Rico. As quickly as possible after the storm passed, she returned to the USVI to again fly support missions.

In both instances, Rodriguez documented the devastation to her islands with her camera, posting hundreds of photographs to social media. In turn, these images—often the only photos coming from the region and without compensation to Rodriguez—were picked up by media outlets and reproduced throughout the world. Her images helped convey the destruction sustained by her island home to millions around the world, resulting in forewarning to others in the hurricane’s path and waves of support for the islands.

Never seeking the spotlight, Rodriguez continued to serve her community through both flight and photography for the remainder of her life.