By Rotor MediaJanuary 13, 2022No Comments

Helicopter Association International (HAI) is pleased to announce MD Helicopters is the 2022 recipient of the Salute to Excellence Humanitarian Service Award. The award, sponsored by Sikorsky, a Lockheed Martin 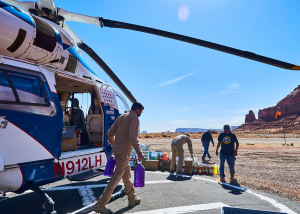 company, honors the person or people who best demonstrate the value of helicopters to the communities in which they operate by providing aid to those in need. It will be presented March 7 at HAI HELI-EXPO 2022 in Dallas, Texas.

When the coronavirus pandemic began sweeping across the United States in 2020, the Navajo Nation quickly experienced the country’s highest per-capita rate of infections and deaths. Located mainly in Northeast Arizona, the reservation also expands into the high desert of Southeastern Utah and Northwestern New Mexico.

The Navajo Nation’s nearly 300,000-member population is spread throughout the 27,000-square-mile reservation, an area slightly larger than West Virginia. Many members lack utilities and live in communal groups far from modern medical facilities. It can take hours to reach some members of the tribe by vehicle. As the pandemic raged, the Navajo Nation was forced to close its borders to outsiders, including supply trucks, to reduce the spread.

“Early on, we wanted to do something to help,” MD Helicopters COO Chris Jaran says. “We had helicopters, and the unanimous support from our leadership board, to volunteer our time, pilots, fuel, and maintenance to fly supplies into the Navajo Nation. We only needed to know how our helicopters could be of the best use.”

Jaran began reaching out to organizations offering helicopter support. The Veterans Medical Leadership Council (VMLC) was one of the few with permission to enter the Navajo Nation. The VMLC immediately took MD up on the offer.

“We thought we’d be flying out PPE [personal protective equipment] and things like that, but there was a more dire need initially,” Jaran says. “Winter temperatures drop into the 30s out there, and many tribal members rely on wood to heat their homes and cook food. Usually, wood is delivered to them. Without the supply trucks, they needed a way to collect their own wood. The first load of supplies we flew was chainsaws.”

The VMLC was supporting veterans in the Chinle area of the Navajo Nation, the most remote area on the reservation and the one with the highest infection rates. The VMLC brought supplies to MD Helicopters’ factory in Mesa, Arizona, that were then flown to the Nation in an MD 902 helicopter.

The first flight, filled with chainsaws to the helicopter’s maximum cargo weight of 900 lb., was to Winslow, Arizona, where the aircraft was topped off with enough fuel to reach any corner of the Navajo Nation. Then, it was on to the reservation.

For more than a year, MD Helicopters provided nearly weekly deliveries of everything from chainsaws to PPE, first in the Chinle area and then across the Navajo Nation.

While almost every flight delivered critically needed supplies, one brought pure joy. In December 2020, most tribal members were sequestered in their homes, including children. Most missed out on a normal Christmas. So, for its final relief flight, on June 25, 2021, MD Helicopters participated in a Christmas-in-summer operation, bringing gifts to the Navajo children.

“One of the veterans dressed as Santa, and we stuffed that helicopter as full as possible with toys and gifts for all the kids,” Jaran says. “We landed at an airstrip on the reservation, and a long line of cars was waiting with kids excited to finally have their Christmas. We handed out gifts and left the rest to be distributed to kids who couldn’t be there. It was a really special day.”

To date, MD Helicopters has flown 52 volunteer supply missions to the Navajo Nation, delivering more than 40,000 lb. of supplies and equipment. The company has received no renumeration for the investment of time, fuel, labor, and equipment use.

“Our aircraft are used for life-protecting missions around the world,” Jaran says. “It was our honor to step up and do what we could to support these efforts in our own backyard.”

The Humanitarian Service Award will be presented during HAI HELI-EXPO 2022. HAI HELI-EXPO®, the world’s largest helicopter trade show and exhibition, will be held at the Kay Bailey Hutchison Convention Center in Dallas, Texas, March 7–10, with the exhibit hall open March 8–10. For more information on HAI HELI-EXPO 2022, visit heliexpo.com.