HAI welcomes its 2022–23 board of directors on Jul. 1, including one new board member and a new special advisor.

HAI welcomes its 2022–23 board of directors on Jul. 1, including one new board member and a new special advisor.

Jeffery Smith of R.O.P. Aviation, who becomes HAI’s 2022–23 chair when the new board is seated, and Director Stacy Sheard of Executive Jet Management/Fanatics, were reelected to their general aviation and commercial aviation seats, respectively. (To read more about Smith and his plans for HAI for the coming year, see “Jeff Smith: Giving Back.”) The entire 2022–23 HAI Board of Directors is depicted at the end of this article.

Joining the board this year is Robert Miller Stallings, a sales representative at Titan Aviation Fuels, who replaces Jack Matiasevich of Southern California Edison Co. in a general aviation operator seat. Also coming on board is Francois Lassale, CEO of Heli SGI in Denpasar Selatan, Bali, Indonesia, who was appointed to serve in the newly created position of special ­advisor – international.

Stallings began his aviation career at a very young age when he started working for his local fixed-base operator in eastern North Carolina. After graduating from the University of North Carolina at Chapel Hill, he began selling aviation fuel and insurance for his family’s business, Titan Aviation Fuels. Obsessed with flying, Stallings soon achieved both his fixed-wing and helicopter ratings. Today, he flies Titan’s Bell 407 helicopter.

“Flying helicopters is my passion, so I’m enthusiastic about being elected to the HAI Board of Directors,” says Stallings. “I look forward to serving on the board in order to build awareness of the rotorcraft community for the successful future growth of the industry.”

The HAI board’s decision to appoint a special advisor – international is part of the association’s efforts to extend its global reach. As a pilot and executive, Lassale brings an extensive international background to the role. He served as CEO of HeliOffshore before becoming CEO of Heli SGI earlier this year and has also been vice chairman of the European Helicopter Association as well as a board member and Corporate Aviation Management Committee member of the National Business Aviation Association. Prior to his civilian career, Lassale served as an infantry officer in the South African Defense Force and as a pilot in the Royal Air Force.

“This position, utilizing the network, collective strength, and collaboration of HAI and its members, will more effectively support the sometimes unseen, smaller international operators around the world,” Lassale says. “It will also enhance the sharing of lessons learned, experience, and training from all corners of the world to create more synergy across the industry.”

The new board is already looking ahead. “I’m very enthusiastic about this diverse board, which represents many different segments of the vertical lift industry,” says incoming HAI Chair Smith. 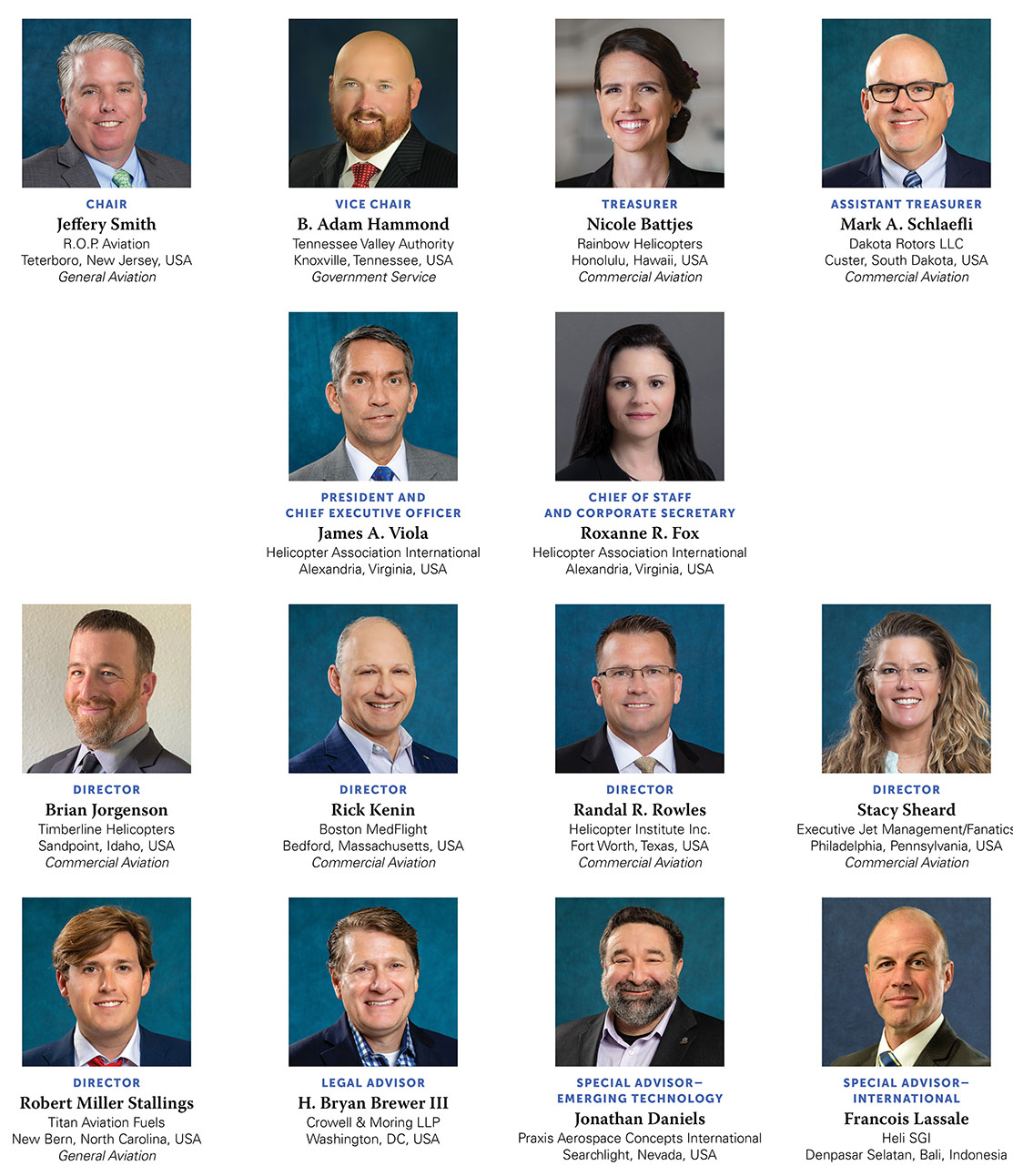 HAI Board of DirectorsHAI officers