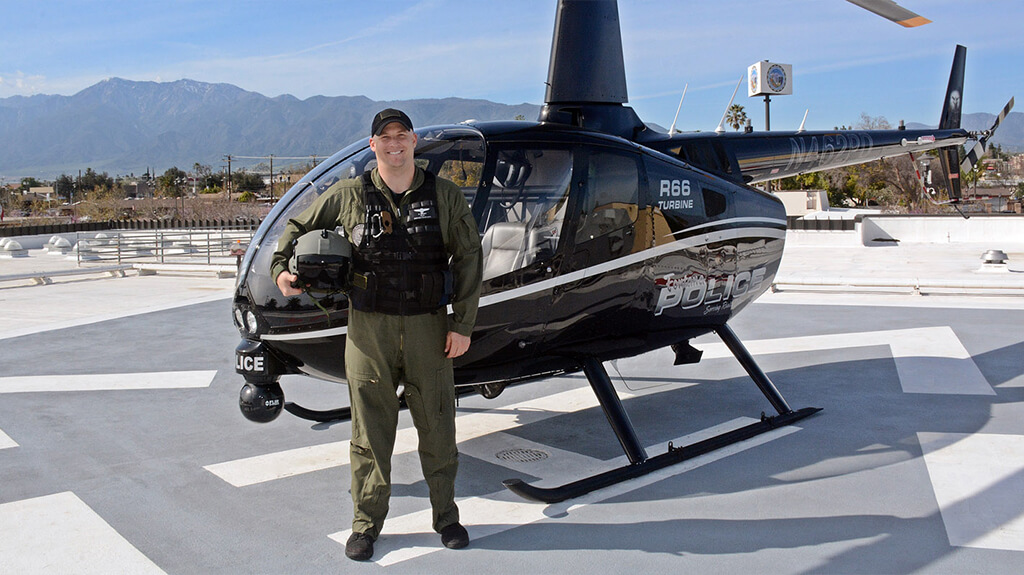 Your current position?
I am a full-time pilot with the Fontana Police Department, and I also serve as a chief warrant officer flying the UH-60M for the California Army National Guard. For the National Guard, our biggest mission is when the state calls us to assist in wildland firefighting.

How did you decide helicopter aviation was the career for you?
Out of high school, I knew I was going to join the army but I wasn’t sure exactly what direction I was going to take. When I sat down with the career manager, he gave me a list of jobs to look at. As soon as I saw UH-60 Blackhawk crew chief on that list, I immediately knew that’s what I was going to do. My first few flights as a crew chief, I told myself, “One day I am going to be the guy up front.”

How did you get to where you are now?
I spent seven years in the active-duty army. My last year on active duty, I put together my flight school packet with the intent to join the California Army National Guard and become a pilot for them. I got accepted within the first six months in the guard and was on my way to flight school not long after.

Later, I went to HAI HELI-EXPO in Las Vegas and came across a helicopter flight school that offered training for veterans, using the GI Bill. I flew with them, getting signed off in the R44 and R66.

A couple years before receiving my Robinson training, a pilot buddy of mine told me about how Fontana PD hires civilians to fly for them because of their operations using R44s and R66s. I called the police department and got linked up with the sergeant who was in charge of the air unit.

What are your career goals?
I love doing the law enforcement work. I am comfortable doing this for a while but one day hope to get into rotary-wing firefighting at some point. I do it with the National Guard, and it’s some of the most challenging and fulfilling work I have done as a helicopter pilot.

What advice would you give to someone pursuing your path?
First, take some serious time to consider if you truly feel it’s the right path to take. It takes a lot of time and dedication to work your way into a flying job.

If it is truly your passion, do not let anything stand in the way of your dream. Don’t get frustrated if things don’t click for you right away. Keep pushing yourself and things will fall into place.

What still excites you about helicopter aviation?
Nothing can match how dynamic a helicopter can be. One day you are flying instruments through the clouds, the next landing on the peak of a mountain, or the next flying 100 feet off the ground under night-vision goggles in the middle of the night.

What do you think is the biggest threat to the helicopter industry?
With large quantities of pilots retiring or moving to the airlines, I think there will be massive shortages of pilots with experience. The expensive cost upfront to civilians to become pilots and the airlines picking up a lot of the military pilots getting out of the service will be big problems in the future.

Complete this sentence: I know I picked the right career when …
… I dropped water during a forest fire to help save someone’s house.