Being able to see from the cockpit was no longer required for safe flight — and this was only two years after Lindbergh’s historic nonstop solo transatlantic flight.

Lucky Lindbergh was lucky indeed. During his 34-hour flight, he encountered many poor weather conditions, including thunderstorms and sea fog. While there is no doubt Lindbergh logged a considerable amount of instrument flight time on his journey, I guess it doesn’t count when the term instrument flight — not to mention some of the basic instruments — had not yet been invented.

The helicopter is an amazing machine but perfecting vertical flight was not easy: more than 35 years separated the inaugural flight of the Wright brothers from Igor Sikorsky’s first helicopter ride in 1939. But we are fortunate that he persevered.

In addition to cruise flight, helicopters have the ability to hover and to fly very slowly for prolonged periods. This makes it a versatile machine with unique capabilities. However, because of its relatively high operating and maintenance costs, the helicopter is more of a tool in a kit bag for performing a job or task than a pleasure craft.

Because we use this magnificent tool to perform a job, that job often takes priority over the enjoyment of flying the machine. In a nutshell, we are paid to perform a job and the helicopter is the tool we use to accomplish it.

My question is this: does completing the job outweigh, or get in the way of, aeronautical decision-making? Yes, I know it’s a complicated question. I have not forgotten what it’s like to spend hours staring at a radar screen and pacing from the weather window to the computer screen, asking myself: If I were to get a flight request right now, what would I say?

The go/no-go question is complicated by the type of flight we have to accomplish, the time of day, the aircraft we are using, and the crew we have for the flight — and the weather we will be flying in. One of the biggest bets every pilot in command makes upon liftoff is this: I believe I can fly and land this aircraft safely in the weather I am experiencing now and the weather as forecast.

But what are the no-go weather conditions? In the United States, our regulator, the FAA, has something to say on this matter.

In the November/December 2017 FAA Safety Briefing magazine, a chart on page 2 defines visual flight rules (VFR) conditions as a ceiling equal to or greater than 3,000 feet and visibility equal to or greater than 5 miles. Marginal VFR is a 1,000- foot ceiling up to 3,000 feet and visibility from 3 miles up to 5 miles. The Aviation Weather Center of the National Oceanic and Atmospheric Administration (NOAA) uses the same definitions (see table 1). 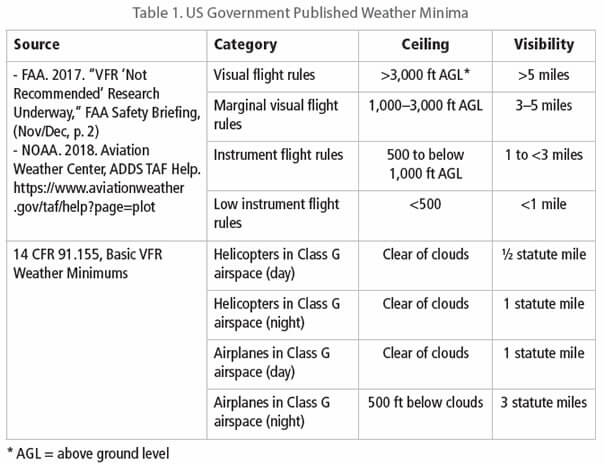 These requirements seem to be linked to 14 CFR 170.3, Definitions, in which VFR is defined as “rules that govern the procedures for conducting flight under visual conditions. The term ‘VFR’ is also used in the United States to indicate weather conditions that are equal to or greater than minimum VFR requirements.”

Regardless of this definition, ask any pilot of flight student what the minimum weather for VFR is and you will get a response of 1,000 and 3. This pilot and student understanding is fully supported by precedent, FAA literature, and NOAA. Anything below 1,000-foot ceiling and 3 miles visibility is considered and published as instrument flight rules (IFR) — and I believe that criteria is appropriate for most helicopter missions.

I understand there are circumstances in which we may be able to safely use our helicopter tool in weather conditions this low, such as utilities, agricultural, and construction work. Sometimes conditions exist where there is a low ceiling, but the visibility is unlimited below the deck. However, let’s keep in mind that these are technically IFR conditions.

If you attempted to fly in these conditions in controlled airspace, you would have to be on an IFR flight plan in an IFR-certified aircraft, or flying on a special VFR clearance under the watchful eye of an air traffic controller. It is likely you have heard your favorite controller say, “The field is IFR — state your intentions.” Translated, that means: you are not on an IFR flight plan and you should be!

The helicopter air ambulance community has slightly higher VFR weather minimums. As defined in 14 CFR 135.609, an 800-foot ceiling and 2 miles visibility is required for day VFR flight in their local area in nonmountainous terrain. Again, as defined by NOAA and the FAA, these are IFR conditions.

As with many things surrounding standards within aviation, the weather requirements are the minimum standards for flight operations. They describe the smallest permissible values — not the optimum. In fact, flights made under weather-minimum conditions can and do end poorly, with weather as a causal factor.

The FAA has identified unintended flight into IMC, loss of control, and controlled flight into terrain as leading causes of accidents in general aviation, which includes all rotorcraft operations. We can help ourselves and our industry by not taking unnecessary risks with the weather.

It may be acceptable for a helicopter performing powerline work or drying cherries to operate with a half-mile visibility — the majority of its flight will most likely be in a hovering flight profile. For these missions, which utilize the unique abilities of helicopters, the minima published in 14 CFR 91.155 make sense.

But when you are using a helicopter to travel greater distances — taking off from one location and proceeding at cruise speed to another location — maybe you should use higher weather minima. How many weather-related accidents would be avoided if we used the higher minima for helicopter cruise flights? Just because we can fly doesn’t mean we should.