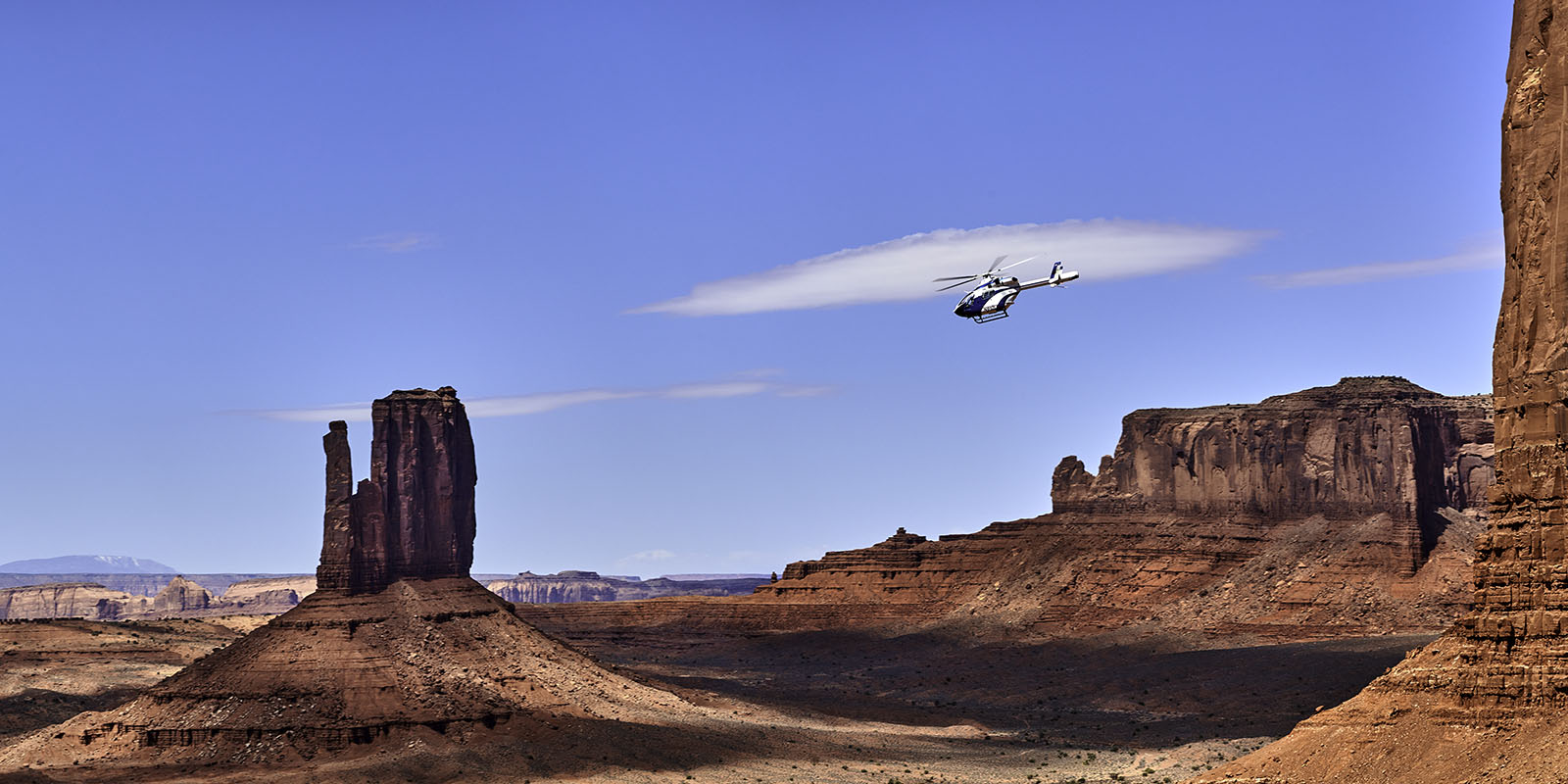 “How can we help?” Four little words that pack a lot of power.

In 2020, with communities around the world reeling from the economic and social disruptions resulting from the COVID-19 pandemic, folks at MD Helicopters wondered how they could help. The result: a yearlong airlift resupplying remote Native American communities while reducing their risk of contracting the disease.

The Navajo Nation stretches across three states: northeastern Arizona, northwestern New Mexico, and, as seen here, southeastern Utah. The stark beauty of the land is undeniable, but the difficult terrain and widely scattered population form a logistics challenge, one uniquely suited to being solved by MD Helicopters and its fleet of aircraft. 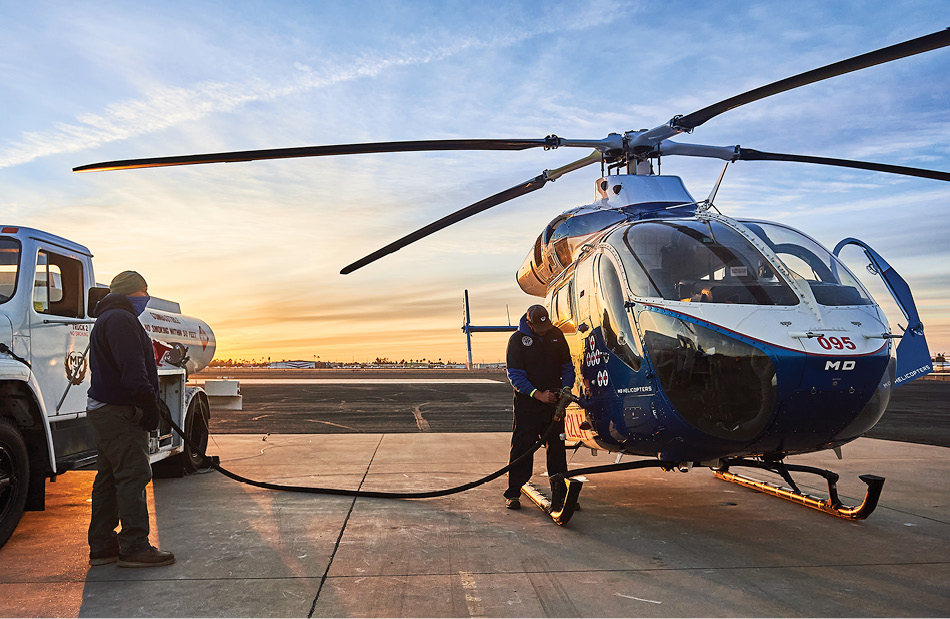 MD 902 serial number 095 is topped off with fuel before departing for the Navajo Nation laden with supplies and equipment for blunting the impact of the COVID-19 virus.

COVID-19 infections began sweeping the United States in early 2020, leading to concerns about the impact of the disease on vulnerable Native American populations. These communities are often isolated and poor, with high rates of diabetes, obesity, and other health conditions that make residents high risk for COVID.

The Navajo Nation occupies 27,000 sq. mi., although with a population about the size of Eugene, Oregon’s. Thirty percent of homes on the reservation lack electricity or running water. Poverty is endemic, and health care is as scarce as grocery stores. Within the reservation’s borders, in an area larger than the five smallest US states combined, are a mere 5 hospitals, 7 full-time health-care centers, and 13 grocery stores.

Rugged topography, coupled with low population density, makes access difficult. Much of the land is ill-suited for roads, and after winter snowfalls, most smaller roads are impassable. 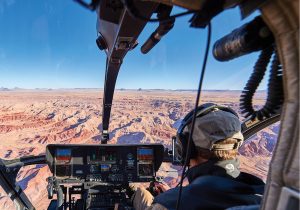 The landscape of the Navajo Nation is often breathtaking, but that rugged beauty comes at the cost of both access and arability.

In the early months of the pandemic, people around the world considered how they could help. It was a question also being asked at MD Helicopters.

Could they make ventilators? It turned out they were not really equipped to do that. How about making face masks? No, that wasn’t possible either.

Elsewhere in the Phoenix area, a Native American military veterans group, Native American Sustainability for Veterans and Those in Uniform (NASVU), was already collecting monies and supplies to help those on the reservation. But when the tribal government closed off travel to and from the Navajo Nation, their question became: How can we get the stuff to the people who need it?

Meanwhile, an MDHI pilot saw news reports of the challenges facing the Navajo Nation and wondered, “Why don’t we help them out? We have helicopters.”

As it happened, both NASVU and MDHI had discussed pandemic relief with the Mesa Chamber of Commerce, which put the organizations in touch with each other. Chris Jaran, MDHI chief operating officer, then formed a plan to use company aircraft and crews to deliver the matériel provided by the veterans group. When he checked with the other MDHI executives about the plan, their answer was an immediate, unqualified yes. 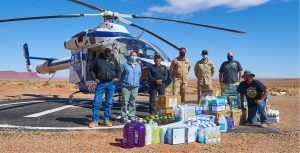 Navajo Nation volunteers pose with the MDHI flight crew and the supplies they had just unloaded at Monument Valley Airport (UT25).

Delivering the Goods, and Goodwill

MDHI committed to weekly supply flights, assuming aircraft and flight crew availability, beginning May 14, 2020. The first three flights carried chainsaws and related items, important to the 15,000 Navajo homes without electricity for heating and cooking, followed by load after load of personal protective equipment, hand sanitizer, face masks, bleach, and anything else that was needed.

Nearly everything they carried was donated or purchased with donated funds, courtesy of NASVU, chaired by Tom Eisiminger, with Bob Dalpe coordinating operations with MDHI and Pete Tsinnijinnie as the Native American veterans advisor.

During the winter, as a new wave of infections moved across the area, even incoming road travel was forbidden by the tribal government, essentially closing off the Navajo Nation to outsiders.

Fortunately, MD Helicopters was allowed to continue its flights, becoming one of the only sources of supplies and equipment from the outside. To further reduce the risk of virus transmission, even intra-reservation road travel was discouraged, so MDHI flights were directed to additional locations, bringing supplies closer to those in need. 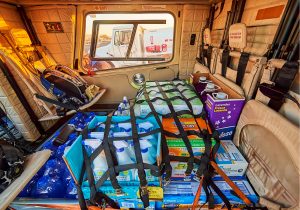 In colder months, the MD 902 carries about 750 lb. of supplies on the three-hour trip to the reservation; the payload is less when summer temperatures raise the density altitude.

The past 18 months have been disastrous for millions throughout the world, many of whom have then turned to others and asked, “How can I help?”

MDHI’s commitment to help made a meaningful difference to thousands of Native Americans. Through 50-plus trips, the OEM delivered approximately 28,500 lb. of supplies and gear to remote Navajo communities. All costs for the six-hour round-trip flights, from fuel to crews to maintenance, were covered by the company.

As public health conditions on the reservation improved, MD Helicopters and NASVU concurred that these flights had served their purpose and could be suspended. But they had one last, special delivery to make.

Waiting in the warehouse since December of 2020 were 500 lb. of toys for Navajo children. They had been scheduled for delivery before Christmas, but out of an abundance of COVID caution, the toys stayed put. That is, until the very last flight, on Jun. 25, 2021, when, as a surprise to the children and a fond farewell to the adults, an MD Explorer loaded with goodies and piloted by Santa Claus landed in Chinle for a summertime Christmas.