By Rotor DailySeptember 30, 2022No Comments

Charles Beesley and his family are pleased to announce the Guimbal Cabri G2 as the primary training platform for Icarus Aviation located at Warsaw Municipal Airport in Missouri. According to Beesley, founder and owner of Icarus, “the initial focus of Icarus will be helicopter flight training, but we plan to become an aviation academy with fixed wing training, in house maintenance, and an FAA Part 141 certificate. For us there was never any other option than the Cabri; Its safety, modern cockpit, and economical value made it a no-brainer.” 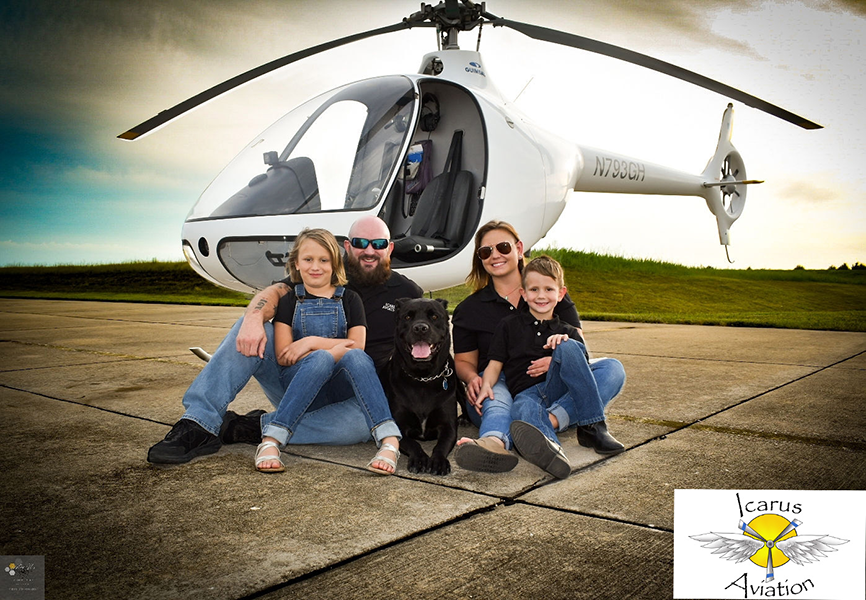 Charles got his first taste of flying when he joined the military. He joined the United States Marine Corps and as is so common among those of us who find our calling in this business, he could not shake the aviation bug. Once his military contract was complete, Beesley went to the closest helicopter flight school to his hometown, a 4-hour drive away, 3-5 times a week to get his training completed. During his time at what was then Midwest Helicopters, the company began their transition from the R22 to the Cabri G2.  From the beginning, Beesley was attracted to the G2 and elected to do his training in it, eventually becoming a CFI and following the common path of instructing, survey work, charters, etc. while building time.

The inspiration for Icarus Aviation sprung from Beesley’s own journey and the traveling he had to do to convert his dream to reality. Until now, there was no convenient location for helicopter training on this side of Missouri, which is a problem Icarus Aviation aims to fix. Icarus is already working towards their 141 certificate and hopes to partner with a college to develop a program to help other mid-west kids like Charles make their aviation dreams a reality. Icarus also has plans to work with local high schools and develop programs to help get a younger generation involved in the industry, something that is much needed as the aviation community is facing pilot and mechanic shortages like never before.

“‘Mom and Pop’ flight schools have long been a staple in this industry, a place where future aviators get a chance to not only learn the ins and out of flying – but where they grow up and develop their aviation family, a family that will impact the course of their career and often follow them in their journey. We are happy to welcome Icarus Aviation to the Guimbal and Cabri USA family” says Sarah Brazel, Precision’s Manager for Guimbal Sales and Support.”

You can learn more about Icarus Aviation at https://icarusflightschool.com/.

Precision, located in McMinnville Oregon, is the sole distributor of the Guimbal product in the United States, as well as the supporting entity for Canada. Precision maintains a robust stock and full-time team in Oregon allowing for dependable parts fulfillment, personalized service, and around the clock AOG support.