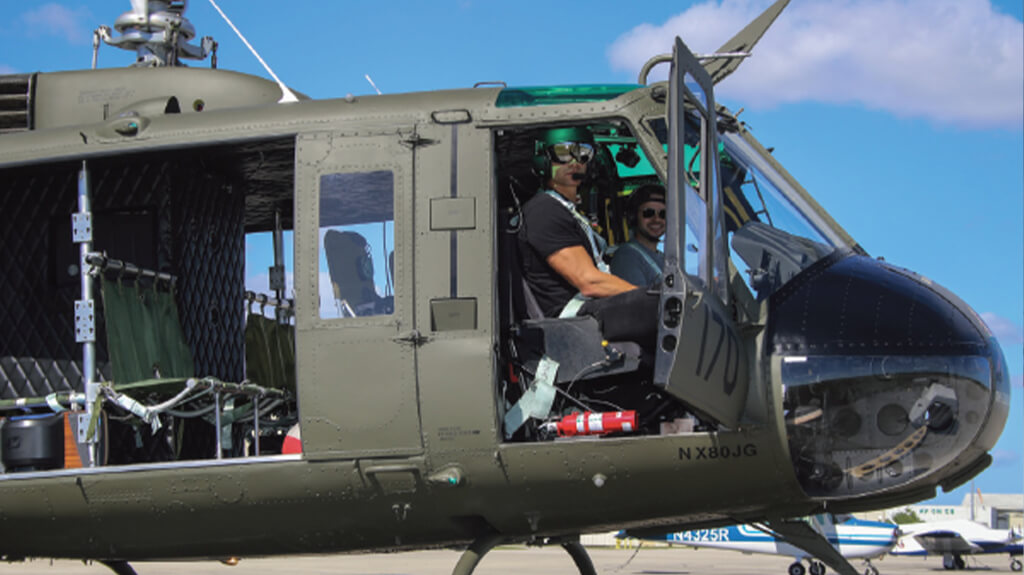 NFL tight end Jimmy Graham—newly signed to a lucrative free-agent contract by the Chicago Bears—didn’t get much attention or encouragement at home, growing up in what can best be described as a highly dysfunctional military family. Things got so bad that his mother effectively abandoned him as an 11-year-old when she placed him in a group home in Goldsboro, North Carolina, where the older and bigger boys beat him regularly.

So it makes sense now that, after his improbable rise to stardom and wealth in the NFL, Graham is committed to encouraging youngsters—especially those from similarly tough and impoverished backgrounds—to aim for futures that seemingly are beyond their reach.

Though he’d only been a licensed pilot for a little less than eight years at the time, Graham jumped at the chance in 2018 to follow in the footsteps of Gen. Chuck Yeager, Capt. Chesley “Sully” Sullenberger, and actors Harrison Ford and Cliff Robertson as chairman of the Young Eagles. The organization, founded in 1992 by the US Experimental Aircraft Association, gives children ages 8 to 17 opportunities to experience flight in a general aviation aircraft and to learn about aviation.

Because he can take only one kid at a time up with him in his Extra 330, and only two or three in his Beaver, Graham’s Young Eagles ride of choice is his Huey. The aircraft, along with his charitable organization, The Jimmy Graham Foundation, is based at Miami Executive Airport (KTMB), outside of Miami, Florida.

The iconic model is fully restored to the way it looked when it flew with the US Army’s 170th Assault Helicopter Co. during 21 months from 1968 through 1969. The helicopter operated in the Vietnamese Central Highlands, ferry­ing soldiers into and out of battle zones. It also flew into and out of Cambodia and Laos in support of the 5th Special Forces Group. These days, the Huey mostly carries children via the Young Eagles program, along with Vietnam veterans taking brief trips down memory lane.

ROTOR: Given your challenged childhood and the huge amount of time you’ve committed to becoming a top athlete, how did you get so involved in flying?
Graham: The first movie I remember watching was Top Gun. My dream was to be a fighter pilot, but then I grew to a freakish six-seven and there went that dream. We lived around military bases—my original parents were in the military. I randomly loitered around airports, talking a lot about aviation and asking a lot of questions. I met a guy named John. He said if I ever wanted to go up [in an aircraft], he’d give me a ride. So I flew with him and loved it.

When did you get your pilot’s license?
I played basketball at the University of Miami for four years, then played one year of football there before being drafted by the New Orleans Saints. I’d never had the time or money to learn to fly. But after my first NFL season, I had some money and, for the first time, some [spare] time in the offseason, so I started lessons. I took my checkride before the end of that year. Except in years when I had off-season surgeries, I’ve learned new ways of flying or gotten new licenses every off-season since.

What licenses do you have?
Beyond my private pilot’s license, I’ve got my airplane single-engine sea and land, airplane multi-engine land, tailwheel, rotorcraft, instrument (airplane and helicopter), and commercial helicopter licenses. I’ll probably add my sea and land commercial license, and after I retire from football I want to move into gliders. I’ve kept this under wraps until now, but I’m also a licensed skydiver.

During the season, I may only have time to fly two or three days. But the rest of the year, I fly on average five days a week. I just love it; I love everything about flying.

Where does that passion and commitment come from?
To be honest, I don’t just half-ass anything. Whether it’s football, or athletics, or flying, or investing my money, I want to do it to the very best of my ability and keep learning more and more about it. I’m kinda’ weird that way, I guess. But even if I’m doing a charity event, I guarantee you … it’s going to be excellent.

Have your coaches or teams ever raised concerns about your flying?
They don’t want to go there with me. One time when I was with the Saints, [Head Coach] Sean Payton and [General Manager] Mickey Loomis, before I signed my big deal, actually mentioned that they didn’t want me to be in a private plane if it wasn’t a jet with two engines and had a copilot. I told them I wouldn’t sign that contract and that there were 31 other teams that would give me the same contract AND let me fly. No organization has ever mentioned it again.

How did you get involved in the Young Eagles?
A good friend of mine, Sean D. Tucker, flies airshows. He’s been doing it about 30 years solo. And this last year, he wanted to go to a two-plane operation. So I got involved with him with my aerobatic plane. He also got me involved with the Young Eagles program, and I quickly saw the benefits of their mission. [Editor’s note: Tucker followed Sullenberger as the Young Eagles’ chairman in 2013 and continues to serve as co-chair alongside Graham.]

You could champion any cause you wanted, or just spend all your time flying. Why get deeply involved in the Young Eagles?
I’m a gutter kid. I came from the gutter. I always tell kids that, as a boy, I had my PhD—poor, hungry, and driven. And that’s a gift.

I’m thankful for every hardship I had. It made me grow up fast and [gave me drive]. The Young Eagles program gives me a chance to talk to kids—especially kids from tough backgrounds like mine who probably never dreamed they could do something like this—and get them thinking about aviation as a career. It gives me a chance to motivate them and encourage them not to be held back by whatever negative circumstances they’ve had to deal with