On the Trail of the Dragon Slayers

My plan was to visit commercial helicopter operators fighting wildland fires in the western United States. It seemed there were fires everywhere, some springing up overnight, and every operator I spoke to said, “Sure—come on out!”

I’d ask, “Where should I meet your folks?” and they’d reply, “Not really sure where they’ll be.”

“When should I be there?” They’d respond, “Can’t really say.”

So with a car full of cameras, beef jerky, and energy drinks, I set out on a journey of discovery and happenstance. And you know what? It worked out just fine.

A Firehawk AS350 B3 at Reno-Stead Airport (KRTS), Nevada, awaits its call to duty. Photo by Mark Bennett/HAI

What I discovered in my travels were a lot of aircraft and crews sitting. Waiting. Prepared to go. Willing to go. But not going, because no one had called for them. So I came home with many interesting photos of machines sitting, waiting. Those are not the money shots but do illustrate the reality of wildland firefighting, where weather, terrain, and the discarded cigarette rule your future days. 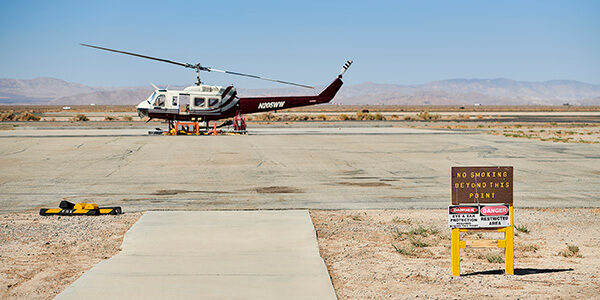 Sometimes they sit alone, sometimes with a brother, and sometimes they wait with distant cousins. Dawn to dusk, from mountaintop to big-city airport, they are manned by dedicated crews who could not so much as spin up the rotors for a photo because a call could come at any second—and every second counts. 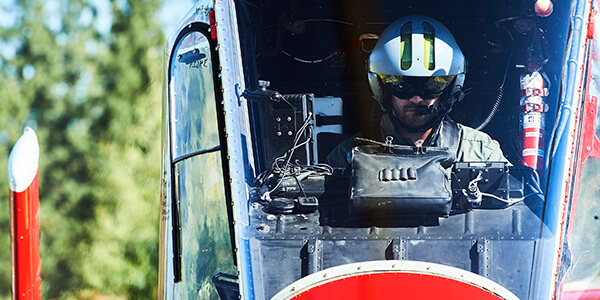 Not every helo was static. I found them flying in the mountains above L.A. and the nether ends of California’s Central Valley, and in the canyons south of Salt Lake City.

What were these aircraft doing in the air? Some were sucking up water and dousing the dragon, like the Erickson S-64F shown sucking and dousing on the opening pages of this essay, or filling a Bambi and heading back to the fire like this Krassel Helitack AS350 B3 at left. Other aircraft were captured aloft, checking out a report of smoke, reconnoitering a blaze, trucking around crews and matériel, or just stopping by for a refueling. 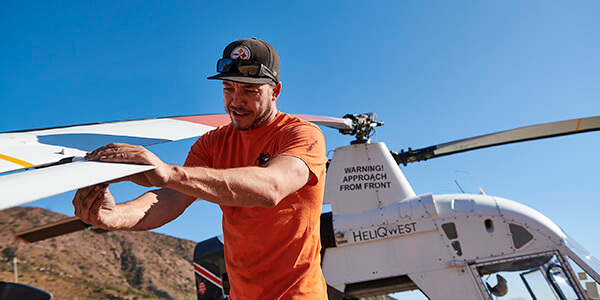 My thanks go out to the many men and women—operators, flight and ground crews, and government employees—who welcomed me into their midst and shared their skill and knowledge. These images are the result of their cooperation and, hopefully, are a testament to their dedication and successes.