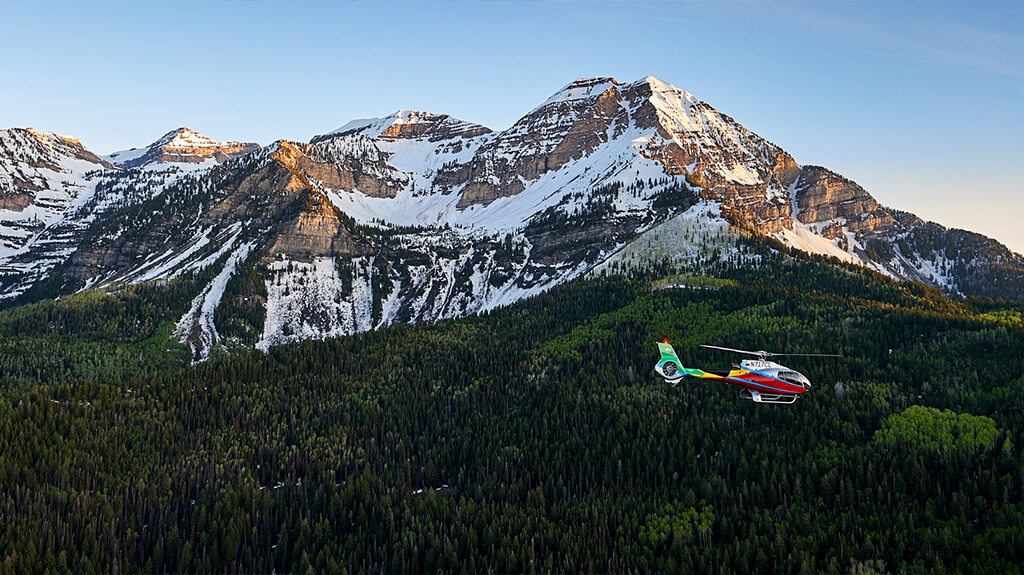 One Flight at a Time 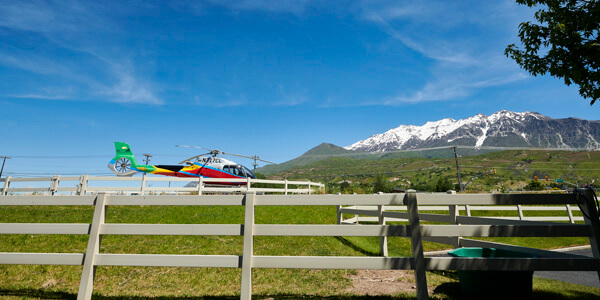 Orem is situated along the foothills of the Wasatch Range, southwest of Mount Timpanogos, so even before the aircraft is airborne the views can be spectacular. Photo by Mark Bennett/HAI

It’s early June in Orem, Utah, 6,000 feet above sea level, 45 miles south of Salt Lake City, and a warm day barely breaks 70 degrees. To the northeast, rising another mile into the clear blue sky, is Mount Timpanogos, second-highest peak in the Wasatch Range, its rocky slopes speckled with trees and still draped in snow. I’m too far away to smell the Great Salt Lake, but not so far that the sky doesn’t sport clusters of gulls riding a breeze from the north.

Occasionally, a helicopter takes people to explore the mountain.

For some, it’s the start of a journey. 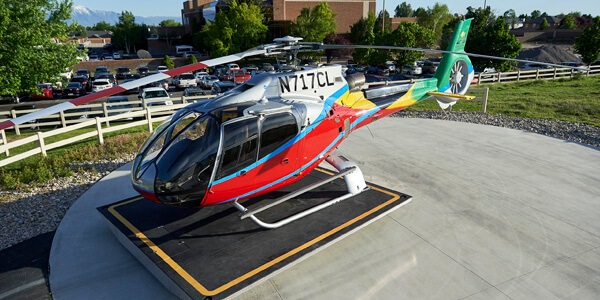 The lodge’s EC130 operates from a helipad at Cirque Studio, in Orem, Utah, an expansion driven by the rapid growth of the Cirque programs. Adding a helicopter to the Cirque Lodge treatment options wasn’t done lightly. The facility pursued and earned a Part 135 Single Pilot certificate. Cirque pilot Matt “Hewy” Hewlett holds an ATP helicopter rating and is an FAA designated pilot examiner. He is also director of operations, chief instructor, and a pilot examiner for Universal Helicopters’ nearby Provo campus. Photo by Mark Bennett/HAI

It was 20 years ago that well-known local businessman Richard Losee was fashioning a lodge he owned in Sundance, on the east side of Mount Timpanogos, into a health and wellness center. He had succeeded with jewelry and beauty businesses, and this new venture was a logical extension of those endeavors.

However, as the lodge was nearing completion, Losee had a change of plans. “We were hit broadside by the effects of addiction with very close members of our family. And after trying a lot of resources we were told about—treatment center, psychiatrist, psychologist, counseling, cattle ranch—we decided to take it on ourselves.”

The new facility wouldn’t be a health and wellness center but a substance abuse treatment center instead, a change that required tearing out the front of the nearly complete structure and rebuilding it to accommodate the new mission.

Losee christened the facility, nestled in a wooded valley facing a glacial bowl carved out of the mountain, Cirque Lodge, in honor of the latter topographic feature. The treatment center opened in November 1999. 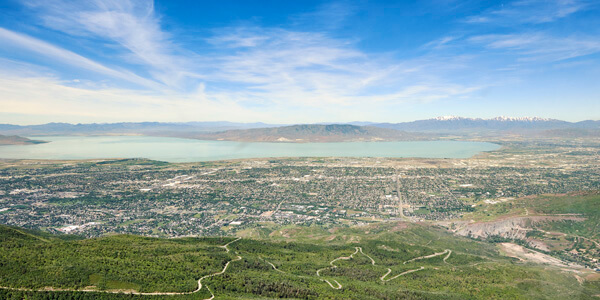 Orem, Utah, seen here from the east, is part of a long string of suburbs and exurbs trailing south from Salt Lake City, out of frame on the right. The body of water ahead is Utah Lake. Photo by Mark Bennett/HAI

In 2010, Forbes magazine listed the Orem, Utah, area as one of the best places in the nation to raise a family, and in 2014 Time magazine declared it the best place for spiritual well-being. At first, clean-living, family-oriented Utah struck me as an odd locale for a drug rehabilitation facility but, on second thought, maybe it’s the perfect place.

And if you follow that second line of reasoning, when the lodge could no longer accommodate the number of residents seeking treatment, what more fitting location for expansion than the former recording studio for the Donny and Marie Osmond TV show? The studio provided plenty of room for a second Cirque location, and it was there, in 2004, that Losee added the means for an unusual treatment “experience”: a Eurocopter EC130 helicopter.

With what must have been an innate sense of its potential, Losee decided to incorporate the aircraft into the Cirque treatment programs without a clear idea of how it would contribute. So he turned to Cirque Director of Experiential Dave Beck and said, “Figure out how to make it work.”

And that’s exactly what Beck did. 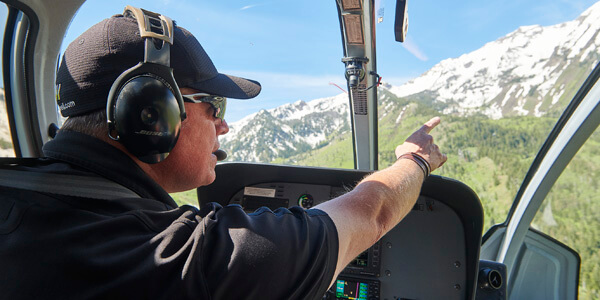 Hewlett shares the beauty of the Wasatch Range during an hour-long flight, before landing on a ridge where residents of the treatment programs spend time away from man-made distractions. Photo by Mark Bennett/HAI

“Men and women have been going to the mountains for eons—for enlightenment, for the feeling that there’s something up there,” says Beck. “A perspective you get that you don’t get down in the valley.”

Beck easily looks the part of a former football player and boxer, which he is. He’s also a recovering alcoholic and employee No. 1 at Cirque Lodge. He was already sober, a CPA, and running a 200-bed health and wellness facility when he was recruited by Losee. As Cirque changed its mission to treating substance abuse, Beck readily adapted.

But using a helicopter in addiction therapy? 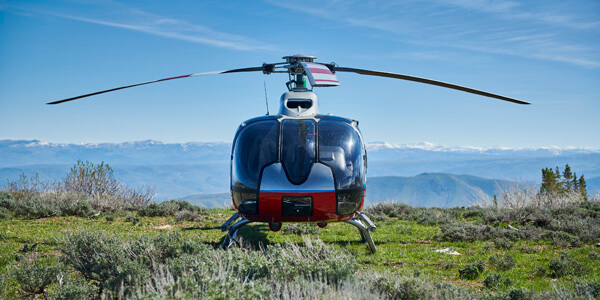 Since 2004, the lodge’s EC130 has carried residents up into the Wasatch Mountains two or three times a week, year-round, weather permitting. Photo by Mark Bennett/HAI

“Do you need a helicopter in order to do treatment? Of course not—there’s no precedent for this,” observes Beck.

The helicopter experience has developed to be about an hour exploring the mountains and valleys of the Wasatch Range, then spending time on the ground, away from the city. Beck explains, “I’d like them to be alone, spend some time and try to empty themselves of thought and feeling. No electronics. No mechanical sound—it’s just nature.”

Residents are encouraged to collect a rock or fallen limb and inscribe on it words or symbols that have meaning to them in their life and, hopefully, in their recovery. That totem is added to a growing pile and left for nature to reclaim.

Beck notes one immediate effect the experience has on Cirque residents: “They’re more chatty on the way up, then more pensive and serene on the way back.” 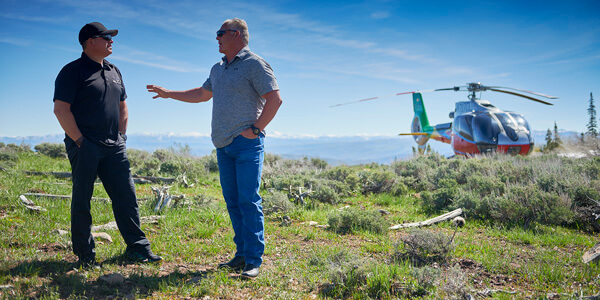 Hewlett, left, and Beck on the mountain ridge, 9,000 feet above sea level, where residents spend time as part of the helicopter experience. Photo by Mark Bennett/HAI

That all sounds good and nice, but I’m still left wondering, why a helicopter? Losee explains that until a person really wants to change, they’re just passing time at Cirque. The sooner a person makes the decision to choose a sober life, the sooner they can truly begin recovery.

“It can be life changing. To sit in the mountains and say, ‘Maybe there is a power out there who does care about me. Who is bigger than me. Who cares whether I’m sober or not sober,’” says Losee.

And comments like this one from a Cirque Lodge alumnus bear him out: “The helicopter was one of the most powerful spiritual and perspective-changing events of my treatment experience.”

The sun sets beyond the Great Salt Lake. Its light abandons the town of Orem, and the western horizon’s shadow scales the flanks of the mountains. The last blazes of gold soften and recede, to peach, to cherry blossom, higher and softer still, till only the ramparts, where the stone meets the sky, are blushed with warmth, then even that fades to blue. High above, a wisp of cloud captures a hint of peach, then evaporates, taking the last of the sun with it.

Tomorrow is another day. Another day to be taken one day at a time.