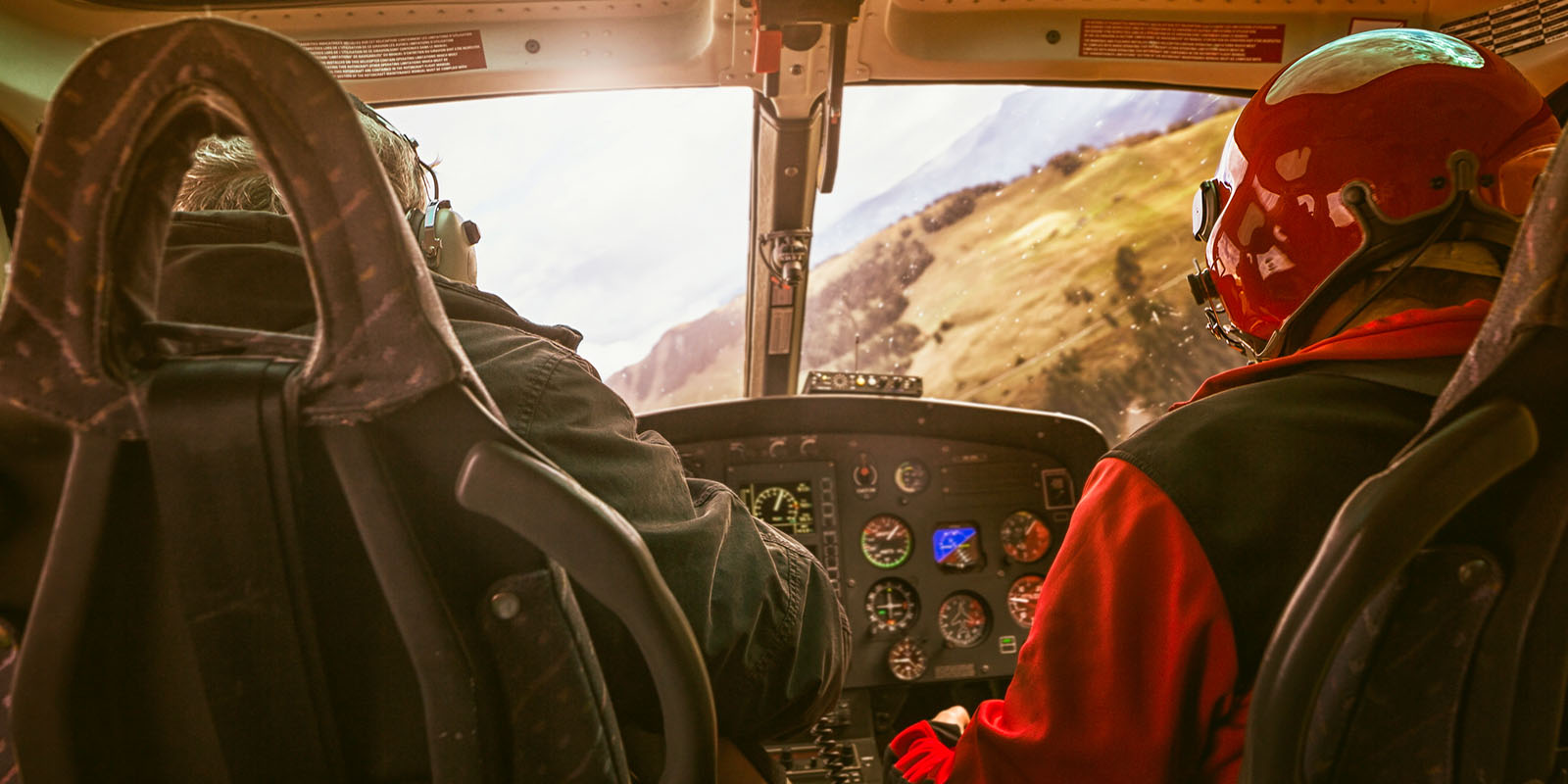 By David Jack KennySeptember 28, 2021No Comments

The satisfaction of having mastered something exceptionally difficult rarely compares to the pleasure of putting that mastery to work. Like surgeons or Broadway stars, top-notch pilots—who can be seen as both professionals and performing artists—sometimes enjoy the thrill of perfect execution, every detail clicking exactly as intended. But that euphoria is best tempered with appropriate caution. Getting swept up in the moment can lead to a very unpleasant surprise.

At 12:08 pm local time on Aug. 21, 2018, a Hughes 369FF took off from the Georgetown (Texas) Municipal Airport (KGTU) for Draughon-Miller Central Texas Regional Airport (KTPL) in Temple, Texas. The Part 91 instructional flight was one of a regular series operated under contract with the US Army Security Assistance Training Management Organization (SATMO) to provide recurrent training in emergency procedures to pilots of the Special Operations Command of the Royal Jordanian Air Force.

Classes of five pilots each rotated through a two-week program whose nine hours of flight time included orientation to the local training area; simulated engine, hydraulic, and anti-torque failures; and a live-fire marksmanship exercise over a designated firing range. Comparable training isn’t available in Jordan.

The Hughes 369FF was a close replica of the MD 530F model flown by the Jordanians in the field. It was configured to place the trainee in the right seat, the one occupied by the command pilot in Jordan. The trainees were described as “very well accomplished,” already qualified as either pilot-in-command or second-in-command. Except for the orientation and live-fire flights, all training was conducted in the environment of the Georgetown, Temple, or Taylor airports, with the transitions between them flown 200 ft. to 300 ft. above ground level (agl).

At the time of the accident, the contractor had one part-time and seven full-time employees and operated three helicopters, one owned and two leased. In 2015, it acquired Part 133, 135, and 137 operating certificates by purchasing the prior certificate holder. An estimated 80% of its business was done with the US Department of Defense, for which it provided “niche training for … allied foreign nation partners.” It also conducted low-altitude operations such as feral hog eradication for local clients. 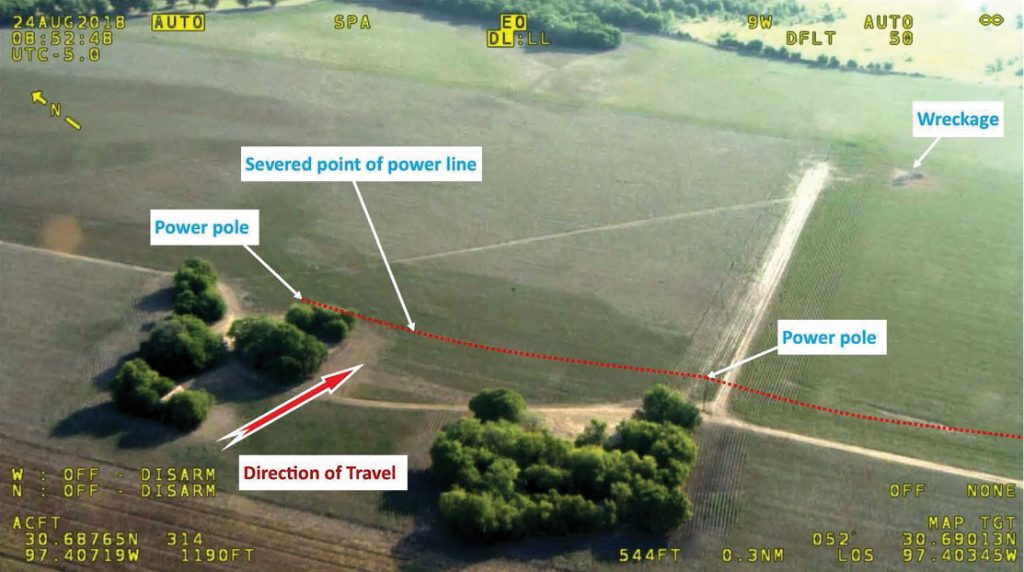 The investigation determined that the power-line poles, which would have signaled to the pilots the presence of wires, were obscured from view by trees.

The 58-year-old instructor entered US Army helicopter school in 1989 and served as a pilot and instructor until retiring in 2003–04. His assignments had included “long-range navigation and precision aerial gunnery” as an attack helicopter pilot for the 160th Special Operations Aviation Regiment. After leaving the army, he continued flying for private operators in Iraq and Afghanistan. In 2017, he was recruited by the contractor’s chief operating officer (COO), with whom he’d served in the 2nd Ranger Battalion in 1981.

The COO described the instructor as “a perfectionist … who always flew ‘by the book.’” Trainees commended his “strictness and discipline” to the point of reprimanding a pilot who descended from 600 ft. to 580 ft. without permission. The National Transportation Safety Board (NTSB) estimated that he had about 7,000 hours of career flight experience, 700 of them in the Hughes 369. He was assistant program manager for the Jordanian contract.

The trainee pilot was a 27-year-old first lieutenant, rated as second-in-command, who’d completed the same course the year before. The NTSB reported that about 1,000 of his estimated 2,000 hours of total flight time were in the same or comparable models.

The instructor requested VFR departure to the northeast at 12:07 pm and was cleared for takeoff. About one minute after departure, he requested a frequency change. There were no further communications from the aircraft.

A resident at his home about 2 miles southwest of the town of Granger heard an approaching helicopter. Rotorcraft traffic in the vicinity was not unusual, but this one was “unusually loud.” He turned to see a black helicopter approaching quickly from the northwest, flying 30 ft. to 40 ft. above a field in a nose-low attitude.

The resident became concerned the aircraft might hit his house, and he estimated it came within 200 ft. before quickly climbing up and over the power lines bordering his street. By the time he turned to track the helicopter’s progress, it had disappeared behind a stand of trees. The time, he said, was somewhere between 12:00 and 1:00 pm.

Between 12:15 and 12:20, a fixed-wing student pilot and instructor returning to KGTU heard a “desperate” string of profanity transmitted over the KGTU tower frequency. The instructor guessed it lasted about 2 seconds. No such transmission was captured on the tower’s audio recordings.

At 12:25, the operator was notified that the helicopter’s emergency locator transmitter (ELT) signal had been detected emanating from a location east of Georgetown. Temple Fire & Rescue and the Georgetown tower were unable to reach the aircraft, so the COO flew the company’s AS350 FX to the reported ELT coordinates. He found the wreckage in a cotton field about 4 miles east of the witness’s house. State troopers were already on the scene.

Data from an FAA air route surveillance radar installation 30 miles northeast of Georgetown detected a target departing the vicinity of KGTU eastbound at 12:09 climbing to about 500 ft. agl. Four minutes later, 9 miles east of the airport, it descended to 50 ft. and continued eastbound over unpopulated areas at about 90 kt. ground speed and altitudes of between 0 and 120 ft.

The main wreckage was found at the end of a 100-ft. debris field (see image, opposite) that began with “five matching 2-ft.-long excavations that were equally spaced throughout a length of about 40 ft.” Fragments of yellow paint in the ground matched that on the tips of the five main rotor blades. Skid fragments, pieces of windscreen, parts of a main rotor blade, and items from inside the cabin led eastward to the fuselage, which was largely consumed by fire. The tail cone and tail rotor were 20 ft. farther east.

The west side of the field was bordered by a two-wire power line running north–south between 36-ft.-high poles. Both wires were severed at a point between two stands of trees about 950 ft. west of the main wreckage. Fragments of the aircraft’s red belly strobe were found 100 ft. east of the break.

The southern end of the stranded steel overhead line had been pulled loose from the next three poles, all of which were bent toward the crash site. Some 1,300 ft. of unbroken cable ran from the wreckage to the fourth pole to the south.

Investigators determined that the helicopter passed between two clumps of trees that obscured the power poles from the pilots’ view. The distance from the point of impact to the helicopter’s final resting place indicated it was flying at high speed.

The probable cause of the accident was “the failure of both pilots to see and avoid a power line while maneuvering at low altitude. Contributing to the accident was the flight instructor’s decision to not follow the training syllabus and allow the low-level, high-speed flight.”

It seems nearly impossible to reconcile the circumstances of the accident with the instructor’s reputation for professionalism and discipline. At the same time, the combined radar, witness, and physical evidence are indisputable.

The COO, who also was an instructor in the Jordanian training program, told investigators that “flying low-level, nap-of-the-earth, gun runs or similar during training are considered serious transgressions.”

He wasn’t aware of the accident instructor ever having conducted such runs, adding that because he flew exclusively for the training program, he was unfamiliar with the low-level hazards in the area. He also noted that the younger, second-lieutenant trainees often wanted to fly low, while the first lieutenants “are a little more responsible.”

The accident flight was nominally a SATMO local orientation flight. Since the trainee had completed the same course a year earlier, he may have retained some familiarity with the area.

In its probable-cause report, the NTSB speculated that the instructor’s decision to “perform, or allow the pilot under instruction to perform,” the low-level, high-speed flight might have been attributable to a desire “to simulate their working environment, make the flight more interesting or engaging, push limits, or impress each other.”

This assessment, too, seems hard to accept, given that the two men weren’t thought to have been close friends or known to have socialized with each other. But something led them to fly at least one unauthorized low-altitude maneuver … and while they might have intended that maneuver to be brief, its end was all too final.