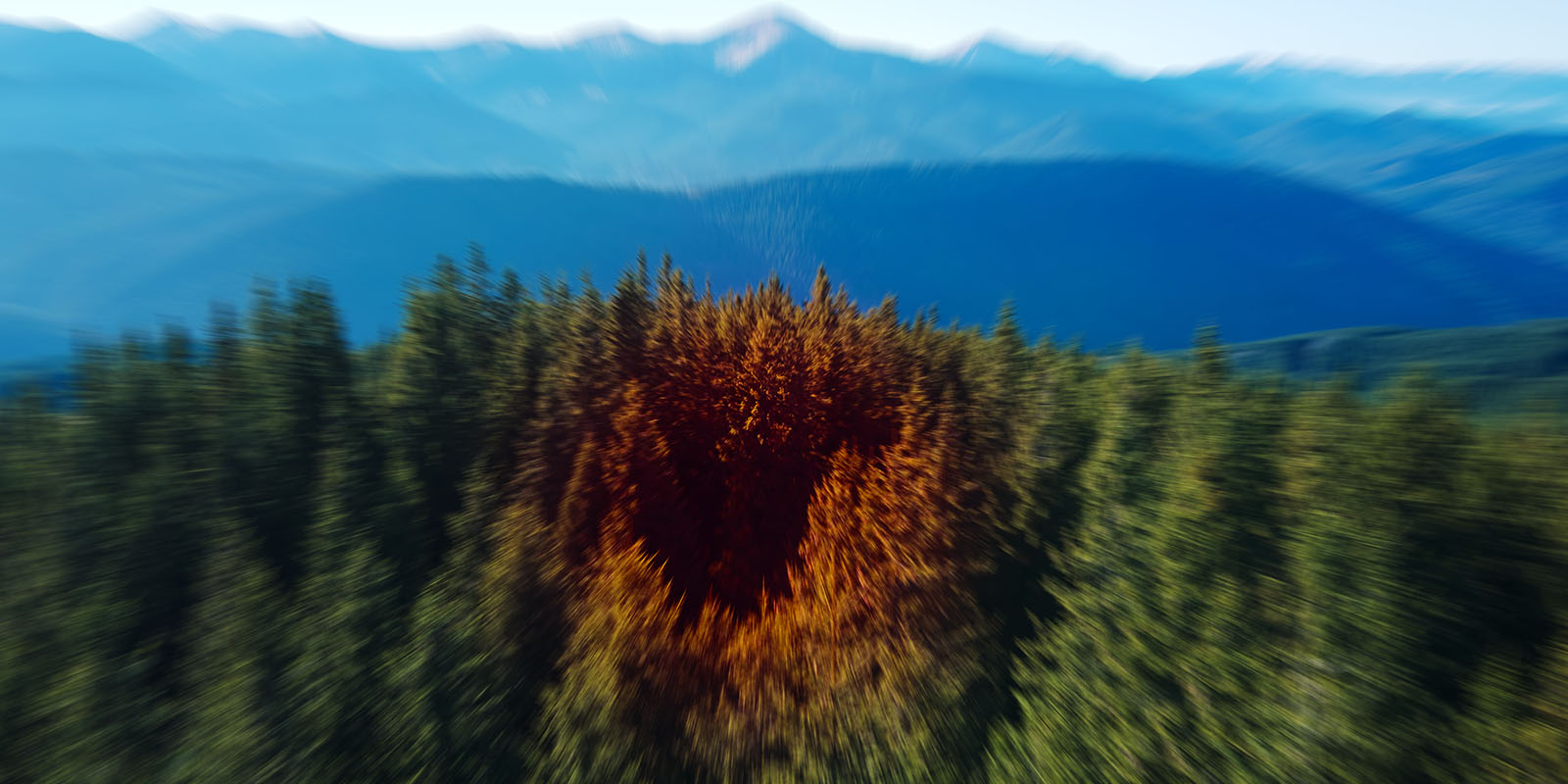 Some flight profiles are easier to ­execute than others, but the simplest can still present unexpected challenges—especially in rarely drilled emergencies or situations that tempt pilots to exceed their own or their organization’s limits.

On Aug. 31, 2019, a charter operator at Alta in northern Norway offered quick sightseeing flights to guests at the annual Høstsprell music festival, a service the company had provided since 2012. The weather was fine, with light winds and a few scattered clouds. 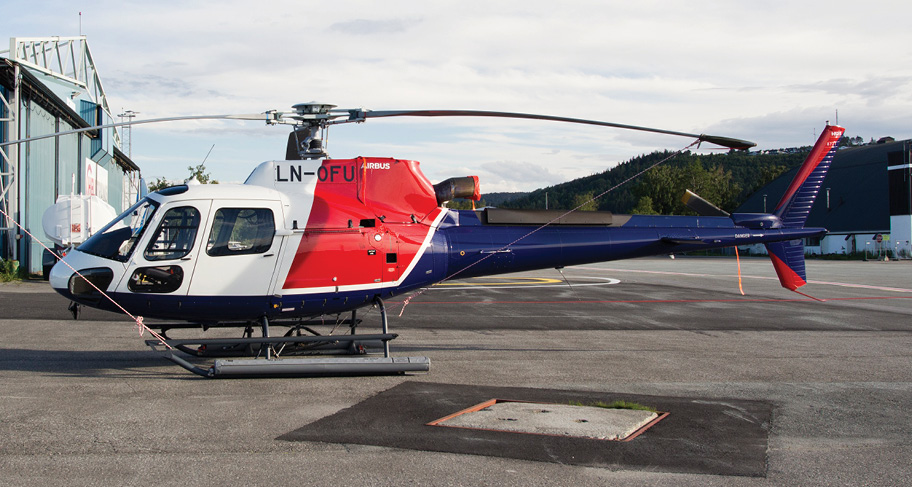 The accident aircraft, an Airbus Helicopters AS350 B3, registered as LN-OFU. (© Erlend Karlsen photo)

Two company pilots made the seven-minute flight from Alta Airport (ENAT) to the festival area at Kvenvikmoen in LN-OFU, an AS350 B3. One pilot operated the helicopter while the other served as loadmaster. They landed at 16:12 local time and shut down the engine to board the initial group of passengers. The loadmaster seated them, secured their safety restraints, and provided them with headsets.

The first flight took off at 16:40 with five passengers on board. ADS-B returns and flight tracking data from the operator’s GPS monitoring system showed that the helicopter initially flew northeast toward Alta, then made a wide right turn toward the Skoddevarre mountain while returning to the festival site. One passenger estimated their lowest altitude en route was 50 m (165 ft.) and said the flight felt safe “without drama or discomfort.” They landed at 16:50 and the pilot again shut down the engine.

Five more passengers boarded, taking off at 16:59 on what was planned to be a slightly shorter flight along a similar route. At 17:02, one back-seat passenger sent a friend a photograph on social media. In it, no sky is visible ahead of the aircraft. Instead, the instrument panel indicates the helicopter was pitched down 30 degrees and rolling 10 degrees left at an indicated airspeed of 90 kt.

About five minutes after takeoff, someone approached the loadmaster to report hearing a loud bang, then pointed out flames and a column of thick black smoke on the hillside above Kvenvik. Hearing no helicopter noise, the loadmaster contacted the company’s air traffic center, then the police, the Joint Rescue Coordination Centre (JRCC) for northern Norway, and air traffic control at Alta Airport. A Cospas-Sarsat satellite began relaying signals to the JRCC from the helicopter’s emergency locator transmitter (ELT) at 17:06, and traffic center staff realized that the helicopter’s position tracking had ended at 17:08. Search-and-rescue efforts began at once.

At 17:16, a Bell 205 operated by Heli-Team AS en route from Banak to Kvænangen spotted the accident scene and landed, finding the AS350 almost completely consumed by fire. Only the passenger in the right front seat had managed to escape. He was flown to the University Hospital of North Norway, where he died of his injuries the following day.

LN-OFU was essentially a brand-new helicopter, having flown just 72 hours since its airworthiness review certificate was granted on Jun. 12, 2019. Its first 100-hour inspection had been performed ahead of schedule on the day of the accident and found no anomalies beyond a slight oil leak from the gasket around the main gearbox input shaft.

After the inspection, the aircraft flew only the combined 22 minutes of the ferry and two sightseeing flights. It was not fitted with either of the two crash-resistant fuel systems available as optional equipment.

To prevent overloading the main rotor system, the AS350’s hydraulic system limits the force produced by its flight-control servo actuators to a maximum of 193 kg (425 lb.). “Servo transparency” occurs when greater force is required to control main rotor blade pitch due to some combination of speed, weight, g-loading, density altitude, and collective pitch. The helicopter is apt to roll right and pitch up while the flight controls seem to have locked. While the AS350 flight manual describes this condition as “self-correcting,” it can cause significant altitude and attitude excursions unless the pilot can compensate with muscle power or promptly reduce the loading.

The 27-year-old pilot held a Swedish commercial certificate and an unrestricted first-class medical certificate. He’d obtained his AS350 type rating at Airbus Helicopters’ facility in Marignane, France, in May 2018, scoring 96% correct on the knowledge test and passing all elements of the flight assessment.

He subsequently completed company operator proficiency checks in August 2018 and February, April, and August 2019 as well as an April 2019 flight test with a Norwegian government examiner. Only the 2018 type-rating course included a practical demonstration of servo transparency. His 256 hours of career flight time included 17 in the AS350 and 50 total hours conducting passenger flights. Company colleagues described him as “meticulous, structured, calm, and cautious.” 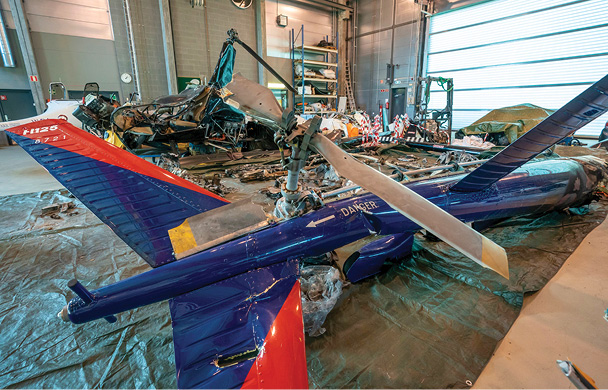 The accident helicopter’s remains, pictured during an NSIA examination in a hangar near Oslo, Norway, Sep. 12, 2019. (Shutterstock/HEIKO JUNGE/EPA-EFE)

The Norwegian Safety Investigation Authority (NSIA) report on the accident notes that the extent of aircraft damage made the investigation “challenging.” Except for the tail boom, the airframe was almost completely consumed by fire, and no data could be retrieved from any of the onboard electronic recording or monitoring devices or the mobile telephones found in the wreckage, which was confined to a small area on an east-facing slope just below the peak of Skoddevarre at an elevation of 301 m (988 ft.).

Two exhaustive searches eventually recovered almost all components that survived the fire. Detailed examination showed that the main and tail rotors were turning at the moment of impact and found no evidence of any in-flight failure. The distribution of the wreckage strongly suggested that the helicopter struck the ground in a shallow nose-low attitude with slight left roll at relatively low speeds, both horizontal and vertical.

ADS-B and GPS tracking data showed that while the ferry flight was straight and level, both sightseeing flights included “great variations in altitudes and speeds” suggestive of vigorous maneuvering over similar points in the landscape, with climbs and descents in excess of 3,000 ft. per minute (fpm). The final position fix showed the helicopter less than 300 ft. above the mountaintop, descending at 3,072 fpm as airspeed increased from 125 to 135 kt. The aircraft was also close to maximum gross weight.

Based in part on the precedent of 11 prior accidents cited in its report, the NSIA concluded that LN-OFU entered servo transparency at low altitude and struck the ground before its pilot could complete the recovery, and that the relatively low energy of the collision strongly suggested that without the fire, the accident would have been survivable.

Airbus Helicopters made crash-resistant fuel systems standard equipment on all new AS350 helicopters delivered after Oct. 1, 2019, and on Oct. 10 of that year issued a letter urging operators to retrofit the systems to all AS350, H125, and EC130 models. No airworthiness directive to that effect has yet been issued in either the United States or Europe, however.

On Oct. 17, 2019, Coptersafety opened a Level D AS350 flight simulator facility in Vantaa, Finland. Simulator sessions in the United States at American Eurocopter in Grand Prairie, Texas, following a 2011 Norwegian accident reproduced servo transparency to an extent described by the ­participating instructor as “FRIGHTENINGLY realistic! We entered an uncontrolled roll, banking further to the right. The controls ‘froze’ at the same time as the collective wanted to come down.” After reproducing the 2011 accident sequence, which began at 300 ft. agl, he wrote, “We were of course aware of what would happen, but if you’re not, you have to be very lucky to avoid crashing into the ground!” He concluded that “simulator training would be incredibly beneficial to our pilots.” LN-OFU’s pilot never had that opportunity.

LN-OFU’s operator regarded sightseeing flights as “the most basic operation there is” and a good way for inexperienced pilots to build time. As gauged by the technical skills required, that’s likely true: they’re generally conducted in benign weather, and the company’s operations manual required them to be “as smooth as possible,” restricting flight attitudes to no more than 30 degrees of bank and pitch attitudes within 15 degrees of level. The investigation made clear that, at least on that particular day, the pilot ignored the latter constraint.

The NSIA noted that the pilot’s company training hadn’t included passenger flights supervised by a more experienced pilot, and that both the accident pilot and his passengers were relatively young. Research suggests this fact may have fostered a group dynamic that encouraged greater risk-taking—and flight-tracking data corroborated an earlier passenger account that the pilot had promised to fly low to provide a sense of speed.

A healthy regard for his own inexperience demonstrated by scrupulous adherence to minimum safe altitudes and maneuvering limits would likely have prevented the accident, while effective fire prevention almost surely would have mitigated its consequences, the NSIA concluded.

Studies of airline pilots consistently find that they perform very well in emergency situations they practice frequently but much less so in unfamiliar situations. This is hardly a surprise. And while most helicopter pilots like to fly low, altitude equals time when things start happening quickly. When the urgent question becomes “What’s it doing now?” time to sort it out can be the most valuable commodity on earth.