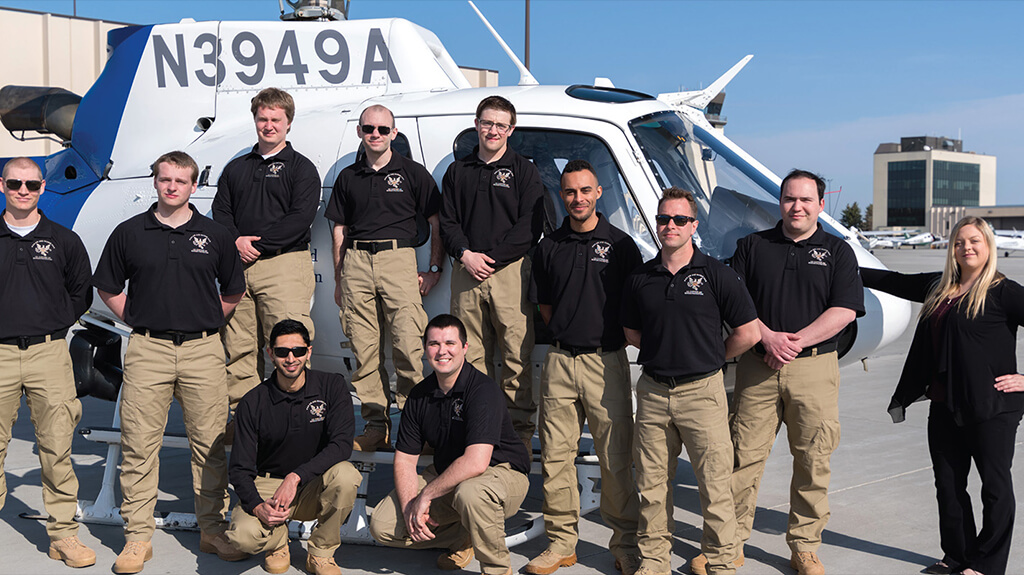 Cover Photo: The AMO Pathways Program offers these UND students a defined career path that extends from flight school to a job as a professional helicopter pilot for the US Customs and Border Patrol. Photo by Wes Van Dell – Windland Photography

One way to expand your pilot recruiting pool? Partner with a flight school.

As recently as 2011, Mark Schlaefli received a stack of nearly 400 pilot resumes at the beginning of every tour season at Papillon Helicopters in Las Vegas. He’d heard about a looming pilot shortage, but it didn’t seem to be an issue. He had plenty of talent to choose from and new pilots calling all the time.

At about the same time, flight schools from around the region began reaching out to companies like Papillon to discuss partnerships that would create pathways to professional pilot careers. Flight schools would benefit by promoting a career path for its pilots while operators would enjoy a steady source of pilots trained to standards vetted by the operators.

“We really didn’t see a need to have such a partnership, with so many pilots sending us resumes, so we didn’t pursue the opportunity,” says Schlaefli, who is now director of operations at Las Vegas–based Sundance Helicopters. “I’ve come to regret that decision. We should have been partnering with schools all along, participating in the development of pilots from an early stage to help ensure qualified pilots.”

Today, not only is the stack on Schlaefli’s desk much shorter, the skill and experience of candidates applying for the jobs is lower than previous years.

“Our industry has an arbitrary 1,000-hour minimum turbine time requirement for new hires, but each year the number of pilots with that experience shrinks,” says Schlaefli. “There is no regulation requiring it. It’s operator imposed.

“We need to think outside the box to keep our pipelines open, such as partnerships and programs to ensure skill and safety in lower time pilots,” he says. “Time in a logbook does not necessarily equal experience or the capacity to be a professional helicopter pilot.”

Schlaefli is not alone. Historically, US Customs and Border Protection’s (CBP) Air and Marine Operations (AMO) hired the majority of its aviation agents directly from the military, with pilots from regional airlines being a close second. However, competition with airlines for these pilots paired with increased bonuses to remain in military service have significantly reduced the talent pool. At the same time, AMO is expanding, both increasing current pilot ranks and expanding into the unmanned aircraft sector.

Fifteen years ago, CBP required all new-hire helicopter pilots to spend time as a ground agent before transitioning to aircraft in order to gain a strong understanding of the operation. There was plenty of interest and no threat of a shortage of talent.

Today, with all air operations for the CBP now under AMO, the requirement to serve as a ground agent no longer exists. Yet competition is fierce for qualified applicants who meet the agency’s 1,500-hour minimum. 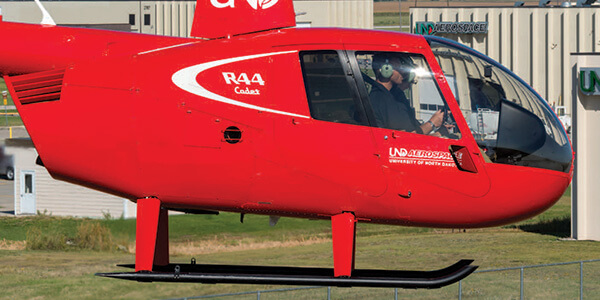 Responding to a Shortage

At HAI HELI-EXPO 2018, the University of North Dakota (UND) presented the findings of its pilot and mechanic labor study, the UND-HAI Rotorcraft Pilot and Mechanic Supply Forecast. Conducted in partnership with Helicopter Foundation International (HFI) and Helicopter Association International (HAI), the study projected a shortage of more than 7,600 helicopter pilots and 40,600 mechanics during the next 18 years.

In response to the UND study, HAI President Matt Zuccaro urged the industry to think collaboratively to develop and maintain pilot pipelines: “We as an industry must start addressing this issue and finding creative ways to attract and keep our workforce in the helicopter industry.” Zuccaro suggested that solutions lay in partnerships, new recruiting programs, and changing industry-imposed requirements.

Operators like Sundance and agencies like the CBP’s AMO have already begun. “This year at the HTOC [Helicopter Tour Operators Committee] meeting, I started the conversation about reviewing the 1,000-hour minimums to hire pilots and developing robust initial operating experience (IOE) programs for lower time pilots,” Schlaefli says.

“I believe if we partner with select schools and hire their graduates, tour operators can safely hire pilots at 750 hours,” he says. “These pilots would then enter an IOE program where they could fly with current pilots for a period of time to learn the job, aircraft, environment, and company procedures. The idea was well received and, with work, I think we can get the industry there.” 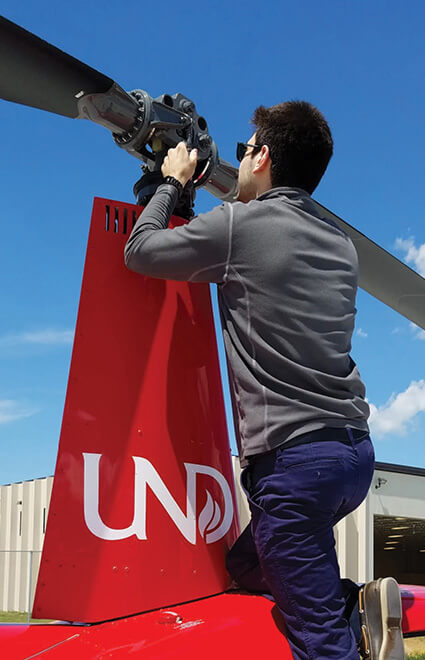 Will pathway programs such as those run by Sundance Helicopters and the US Customs and Border Patrol enable the helicopter industry to compete with airlines in the fierce competition for new pilots? Photo by Wes Van Dell – Windland Photography

The AMO is taking a similar tack. In 2010, the federal government began a Pathways Program to help fill many federal positions throughout the civil service. However, AMO did not initially see a need to utilize the program. Based on the changing aviation industry, the AMO Pathways Program was created in 2017, thanks in part to the support of North Dakota Sen. John Hoeven.

Funded from the salaries of unfilled AMO positions, the program works directly with UND, recruiting aviation program sophomores and juniors interested in careers with the AMO. Successful candidates are offered paid internships to work a minimum of 640 hours at the agency’s National Air Security Operations Center – Grand Forks (NASOC-GF) in Grand Forks, North Dakota. Serving as operations center staff, they begin learning about the agency and supporting air operations, with a defined path to eventual pilot careers with the AMO, flying helicopters, airplanes, and unmanned aircraft systems (UAS).

David Fulcher, acting director of air operations at NASOC-GF, says that his agency’s public service mission was a motivating factor in creating their pathway program. “We need to ensure we can continue to provide service to the public despite issues around pilot hiring.

“We knew we needed to grow our own pilots, and the changing dynamics of the pilot industry drew us to look at other pools,” he says. “We have a long history of working with UND in research and education. It is one of the most successful student aviation training schools in the country, and we know their students are well trained. We are fortunate to have such a resource right here in Grand Forks.”

Between 850 and 900 students attend UND’s aviation programs, flying more than 135,000 hours a year. About 50 of those students are in the helicopter program, flying close to 5,000 hours annually in the school’s four Sikorsky 300C and two Robinson R44 Cadet helicopters.

UND Aerospace offers degree programs in several aviation and aerospace fields, including fixed-wing, helicopter, and UAS. The school operates more than 125 manned aircraft equipped with the latest avionics, including glass cockpit and flight-data monitoring, and a large selection of UAS.

“Our programs are designed to fully prepare students for professional aviation careers by exposing them to the environments they’ll encounter in in those careers,” says Ken Polovitz, assistant dean of student services at UND’s School of Aerospace Sciences. “We have partnered with countless airlines over the years, helping develop and grow programs, training, and pipelines. We are excited to expand that collaboration with the CBP.”

The first group of 15 students entered the AMO Pathways Program in December 2017. Most are veterans, drawn to federal law enforcement and using their veteran’s benefits for flight training, with an eye on professional pilot careers.

For example, Adam (his last name withheld due to safety concerns) served in the Marines. He transferred to UND in 2017 and signed up for the AMO Pathways Program when it was announced, with dreams of becoming an AMO helicopter pilot.

“AMO’s mission mirrors the reasons I joined the military in the first place,” Adam says. “Not only do I get to be a pilot, but I can have a rewarding career serving a greater purpose as a pilot. I hope to be stationed on the southern border flying the UH-60 or AS350 in the next few years, and that’s pretty realistic now with this program.”

The interns will work for AMO around their coursework, and most plan to build flight time as flight instructors while in school. Upon graduation and completion of their 640-hour AMO work commitment, the interns will be promoted to aviation enforcement agents.

The program includes waivers toward meeting the agency’s requirement of 1,500 hours of flight time for promotion to air interdiction agent. AMO Pathways Program participants can receive a 25 percent waiver on that flight time. Some will receive up to 20 percent more in waivers based on their flight instructor experience.

Upon reaching their required minimum hours in aircraft category and class (typically about 1,000 with the waivers), the AMO Pathways Program participants will be eligible for promotion to air interdiction agents, where they can serve as career AMO pilots. 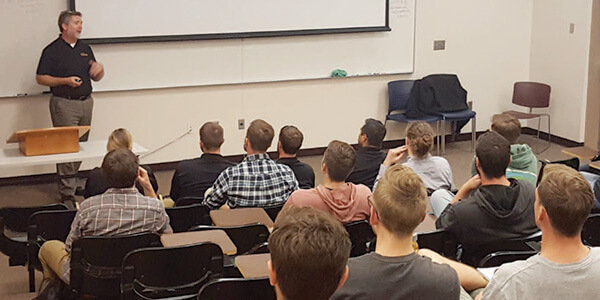 As the AMO Pathways Program launched, Schlaefli developed and put into action a plan for a pathway program for his company. Sundance partnered with flight school Leading Edge Aviation in Bend, Oregon, and began working with UND to put the finishing touches on Sundance’s new Skypath career program. Designed as a path from school to tour pilot and then on to helicopter emergency medical services (HEMS) or utility pilot, Skypath is currently available to students from both Leading Edge Aviation and UND.

Through the program, Sundance will identify and cultivate their future pilots. Moreover, Sundance leadership can provide insight and feedback to the school on the skills and knowledge they desire in pilots, ultimately helping to tailor aspects of training that will help the pilots prepare for and succeed at Sundance.

“We carefully vetted these two schools and chose them based on their strong training programs and willingness to partner with us to help develop the pilots we need in the tour industry and beyond,” Schlaefli says. “The initial selections were made based on a proven track record. Pilot candidates from both schools have proven to be the type of professionals that we want to hire.

“Leading Edge and UND are doing it right,” he says. “As the program becomes established, we will be looking to expand it to more schools.”

Sundance leadership will visit the schools quarterly and get to know the students. They’ll sit in when students interview to be flight instructors at the schools and identify the best candidates for the Skypath program. Those chosen are guaranteed an interview with Sundance once they’ve achieved 1,000 hours (and perhaps a lower number in the future as the industry evolves). If selected as Sundance pilots, they’re hired directly as full-time employees rather than the seasonal positions Sundance has provided in the past.

“The plan is to not only cultivate strong pilot candidates for Sundance but to also keep our pilots a little longer,” Schlaefli says. “To do that, when our pilots reach 2,500 to 3,000 hours, we will help them move into HEMS jobs at Air Methods, Sundance’s parent company, or into utility through a partnership we’ve developed with Redding Air Service in Northern California.”

Thinking Outside the Box

The Skypath program is in its infancy. Schlaefli has only started talking to potential candidates, but he already has high hopes that it can grow and expand, not only to more schools but also to offer more options for pilots looking to move beyond flying tours.

“We as operators should have been doing something like this all along, but the good news is we’re doing it now,” he says. “For our industry to continue to grow and thrive, we need to think more creatively and invest in our future workforce.”