Protecting the Heart of Your Aircraft

Routine inspections and familiarity with your helicopter can spot engine problems before they lead to big-ticket repairs.

Like many of you, I’ve read countless articles by field experts, engine manufacturers, and makers of components, lubricants, and additives, searching for the magic formula to make my aircraft engines last longer. But, in reality, the secret to longer engine life comes down to some basic TLC. Engines are the heart of any powered aircraft. As with human hearts, they require regular checkups and some attention from the user to maintain their health.

As with most mechanical devices, much of an engine’s durability depends on how you use and maintain the machine. Following a thorough inspection routine is a key aspect of maintenance that can identify a problem before it leads to a big-ticket repair or replacement.

Engine inspections typically involve several steps. On a piston engine, a compression check is required at annual inspection or as detailed in the OEM’s maintenance manual. A differential compression check will reveal the health of your pistons, rings, valves, and cylinder walls.

These checks often yield different results between inspections, with numbers that may go up or down from cylinder to cylinder. Don’t focus so much on the findings of a particular check; what’s important are the long-term trends you uncover between inspections.

Here’s where the borescope is especially handy, though: it will help you identify an imminent problem, especially when a valve is burning. That valve could be sealing fine now, but a borescope inspection will show you whether the valve is burning and, hence, whether it will fail if maintenance isn’t performed.

Compression checks and borescope inspections cover our cylinders, but what about the crankcase and all the components inside it, such as the crankshaft, cam, lifters (tappets), piston rods, bearings, and a slew of gears? Here’s where an oil analysis can identify a potential problem inside your engine case.

An oil-analysis program is much like the blood work conducted as part of your annual medical checkup. Some of the elements that can be identified and counted in an oil analysis are aluminum, chromium, iron, copper, lead, tin, calcium, magnesium, phosphorus, and zinc. Oil analyses also check the oil sample for viscosity, flash point, fuel content mixed in the oil, and any insolubles. If you haven’t seen the results of an oil-analysis report, take a look. It’s fascinating.

As with a compression check, the value of an oil analysis lies in the long-term trends it reveals. You don’t have to be a chemical engineer to understand the report, because the oil-analysis lab technician will tell you in plain language in the report’s comments section how your engine is functioning and any recommendations they might have for you, just like your doctor.

The Right Diet for Your Engine

All the inspections outlined in those countless articles won’t matter if you don’t manage what’s taking place inside your engine. What you put into your power plant is as important as how you operate it.

The leaded aviation fuel that provides the higher octane our engines need compared with automotive engines produces more contaminants than unleaded fuel. That’s why it’s recommended that aviation engine oil be changed at intervals no greater than 50 hours if using a full-flow (spin-on) oil filter, or every four to six months, whichever occurs first. It isn’t because the oil wears out—modern oils can go hundreds of hours and retain their lubricating quality. Rather, it’s because aviation engines produce very dirty conditions because of their internal combustion process coupled with their use of leaded fuel.

The oil circulating through the engine must be clean in order to keep the machine clean, cool, lubricated, and sealed, so regular oil changes are a must.

First, your aircraft should be performing within the limits specified by its manufacturer, meaning the oil pressure, oil temperature, cylinder-head temperatures, fuel flow, and so on should be within the design specs. Once it’s been established that the aircraft meets OEM specifications, you should become familiar with what’s normal for the aircraft you’re flying that day.

An engine analyzer is a great tool, but the instrument between your ears is also essential in recognizing changes in engine behavior as they occur. If you don’t pay attention to what your aircraft is trying to tell you, you might be surprised when the engine doesn’t perform as you expect.

What You Don’t See Can Hurt You

A couple of years ago, I elected to overhaul the engine in my own aircraft. It had been performing very well, but it was 350 hours over the recommended time before overhaul. I had relied on doing a repair or replacement based on condition, not time. As Part 91 operators, we have that prerogative. (Part 135 operators will have different guidance.)

I was planning some long-range flights, some that would put me over water for long periods of time. My confidence in the engine wasn’t as high as I wanted it to be, so I removed the engine for overhaul. What I found still bothers me today.

The oil filter had never shown even a sliver of metal in the filter element, with oil temperature and pressure always in the green. I expected to see a clean, unharmed engine upon disassembly.

Instead I found enough solid metal in the oil sump to melt down and make new parts, and the crankshaft bearings looked like the Grand Canyon (take a look at the photos below to see what I mean). 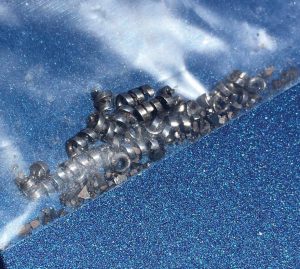 The metal I found in the sump was too large to be picked up by the oil system. Therefore, the metal never made its way to the oil filter, and because I used a quick-drain valve for easy oil draining, it didn’t get through the small hole in the valve. All this meant I was oblivious to what was going on inside my engine. 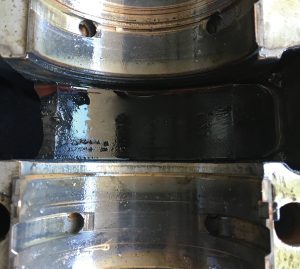 That experience convinced me that all the measures I list above should be employed to assist in determining the health of your power plant. None of them alone will tell you the full story of what’s happening within your engine, but if you conduct routine inspections and pay attention to what the aircraft is telling you, your engine will thank you—hopefully by continuing to move you and your aircraft forward.

By the way, since my overhaul experience, at each oil change I now also sweep the bottom of the oil pan with a magnet.