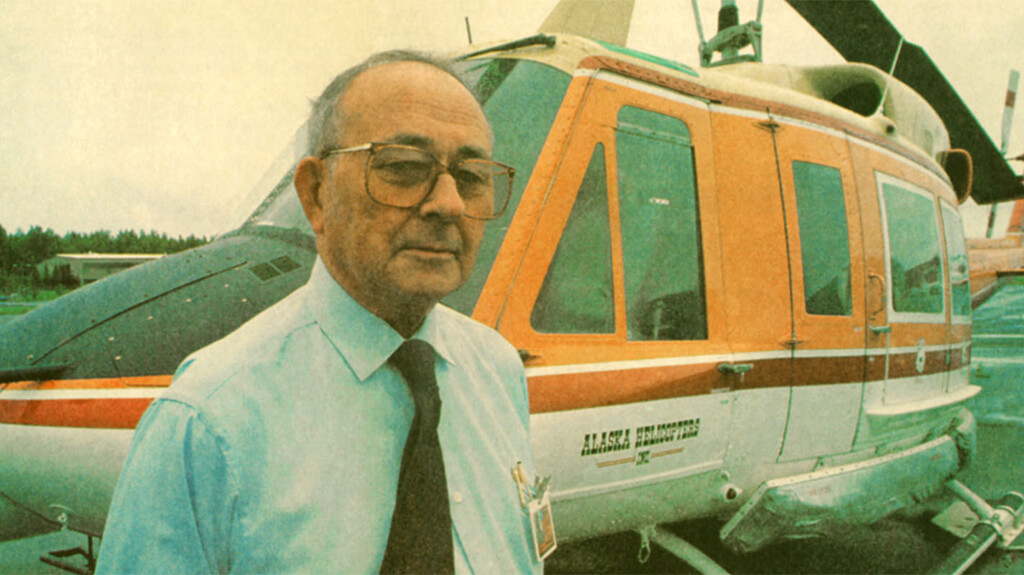 Cover Photo by ©1991 The Anchorage Times

In an industry as young as ours, it’s not difficult to find pilots and maintenance technicians who have made historic contributions. That said, our Trailblazer for this issue of ROTOR is someone who was an influential figure in Alaska helicopter aviation without ever becoming a licensed pilot or mechanic.

Rex Bishopp, who passed away in 2018 at age 96, operated Alaska Helicopters for many years. He was also active in that state’s aviation community, working for safety, advocacy, and historic preservation. Before his death, Rex spoke with Martin J. Pociask of Helicopter Foundation International; this article is written from Pociask’s notes and other sources. 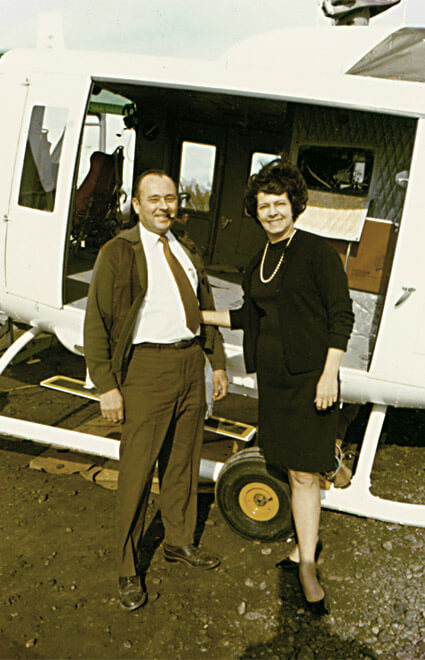 Running Alaska Helicopters was a Bishopp family affair, with Rex serving as president and Ruth as general manager. They are shown here in 1970 in front of a Bell 205A-1. Photo by Bishopp Family Photo

Rex was born in Farson, Wyoming, on June 6, 1922, and lived there on the family ranch until moving to Monterey, California, to attend Salinas Junior College, where he studied business. World War II interrupted his studies, and Rex joined the US Army, where he served in the infantry for four years in the South Pacific, Japan, and South Korea.

By 1955, he was working for his cousin, helicopter pioneer Jim Ricklefs, who owned and operated Rick Helicopters in San Francisco. Rex was the general manager for the three-year-old company. “I ran things and paid the bills,” he recalled.

Rex’s first trip to Alaska was in 1955 when he went there to manage six helicopters for the company. Ricklefs had purchased a branch of Alaska Airlines in 1951, gaining an operating certificate and a helicopter in the process.

For the next few years, Ricklefs and Rex would migrate to Alaska every summer and work out of Merrill Field (PAMR) in Anchorage, flying support missions for oil exploration operations in Cook Inlet. Rex generally drove the truck from California to Alaska with two Bell 47 helicopters in the back. When the summer flying season was over in Alaska, he would take the helicopters back to California to use in agricultural spraying.

During the early days of flying in Alaska, most of the company’s operations centered on petroleum exploration and land surveys. As it grew, the company expanded into every conceivable mission segment available in Alaska, such as mining, logging, communications, and even search-and-­rescue work.

“As you can imagine, there were a lot of accidents in the early 1950s,” Rex said. “There was one recovery in the 1970s that stands out. A fixed-wing pilot had crashed and was missing. It had been two weeks, and he’d been given up for dead. Turns out he was living off the land. We found him and returned him to safety.” 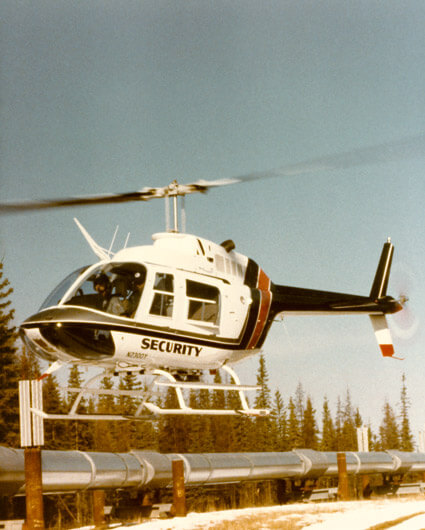 1967 was a monumental year for Alaska Helicopters. Rex met his future wife, Ruth, in 1966; they were married in 1967. He convinced her to move to Alaska during a ferryboat ride up the Inside Passage.

In a 1991 Anchorage Times story, Ruth recalled that when Rex asked her, “Do you want to go to Alaska?” she thought he meant just for a visit. She quickly became enamored with the beauty of the state, however, and the couple moved to Anchorage in 1967.

1967 was also the year Rex purchased Alaska Helicopters from Ricklefs, who had decided to retire. The sale included eight Bell 47G-2 helicopters.

Rex believed that Alaska was a prime place for businesses. “This was more attractive, a better revenue producer than the Lower 48 operation,” Rex stated in the 1991 Anchorage Times article. “Alaska had more opportunity, and I still feel that way. It’s a great state for young people.”

During that same year, the company tackled a wintertime project on the state’s North Slope, above the Arctic Circle. Because of the cold and the limited facilities available, Rex reported that pilots would take batteries to bed with them to keep the batteries warm.
“The crews would also drain and warm the oil before attempting to fly each day,” Rex recalled. “We were working at remote sites in conditions at temperatures 40 degrees below zero. The North Slope weather could be very hard on the pilots and the helicopters.” 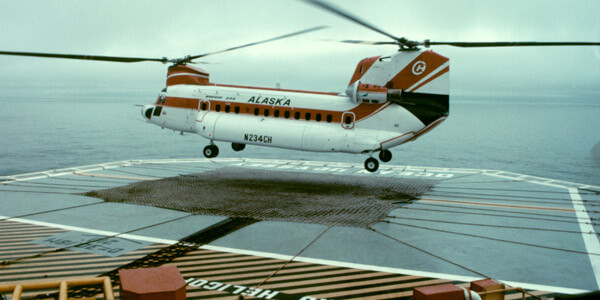 In 1978, Rex and Ruth merged Alaska Helicopters with Columbia Helicopters, headquartered in Portland, Oregon. The deal increased the capabilities of the two companies and also eased the strains of increasing costs and competition. “The Alaska Transportation Commission required companies outside [the state] to merge with existing companies in order to operate in Alaska,” recalled Rex.

The merger allowed Columbia Helicop­ters to expand its operations into Alaska. It also provided Alaska Helicopters with access to the Columbia fleet of heavy-lift aircraft, including the Boeing 234 Chinook and Boeing Vertol 107-II. Rex’s company, which operated independently of Columbia, could now bid on larger projects in Alaska that required heavy-lift capabilities.

Equally, Columbia used Alaska’s fleet of light and medium helicopters to support its work. “In the early 1980s, we were operating a combined 30 machines,” said Rex.

The merger also allowed Rex to work with Wes Lematta, the founder of Columbia Helicopters and yet another helicopter industry pioneer. Lematta created the civil heavy-lift helicopter sector with the purchase of a Sikorsky S-61 in the mid-1960s. He was also a partner in the first successful helicopter logging operation with Oregon lumberman Jack Erickson, who later created the Erickson Aircrane Company.

“Wes was a good man and friend,” recalled Rex. “Our families remain close.”

The Boeing 234 also allowed Alaska Helicopters to expand its support of offshore petroleum exploration. The two-tanked Chinook had the range to shuttle crews hundreds of miles to distant locations, such as the Navarin Basin, an Arco base on St. Paul Island, and other exploration sites. “We operated the first commercial Chinook under our own certificate,” remembered Rex.

Alaska Helicopters and Columbia would often trade aircraft, depending on the needs of a particular job. “We sometimes switched and repainted names as needed on the aircraft,” said Rex.

“Tommy was a catalyst for this work,” said Rex. “He was a very good helicopter mechanic. He always kept us flying and was very well respected in the industry. A lot of people and companies sought him out to service their helicopters.” 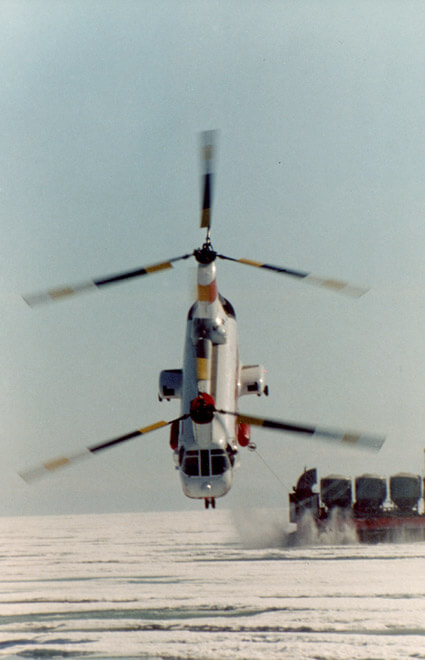 In 1982, Columbia and Alaska Helicopters participated in the industry-renowned hoverbarge tow famously captured by Columbia Helicopters photographer Ted Veal. Petroleum company Sohio wanted to know the feasibility of delivering supplies during spring and fall, when the ice pack is either forming or breaking up. (Tempera­tures in northern Alaska generally permit waterways to be safely used as ice roads during the winter.) Veal’s dramatic photo shows a Vertol 107-II, seemingly near vertical nose-down (it wasn’t), pulling the 220-ton barge through the broken ice of Prudhoe Bay.

Over the years, Rex’s company became something of a family business. In addition to Rex serving as president and Ruth as general manager, stepson Clint Johnson flew with the company as a line pilot and held other management positions for almost 14 years. Johnson is now chief of the Office of Aviation Safety, Alaska Regional Office for the National Transportation Safety Board.

When Rex and Ruth retired in 1995, Alaska Helicopters was sold to Era, operated by long-time competitor Carl Brady. “I always appreciated Carl Brady and his company because he had such a good strong company,” recalled Rex. “It was a difficult decision to retire. We had great employees, but it was time.” 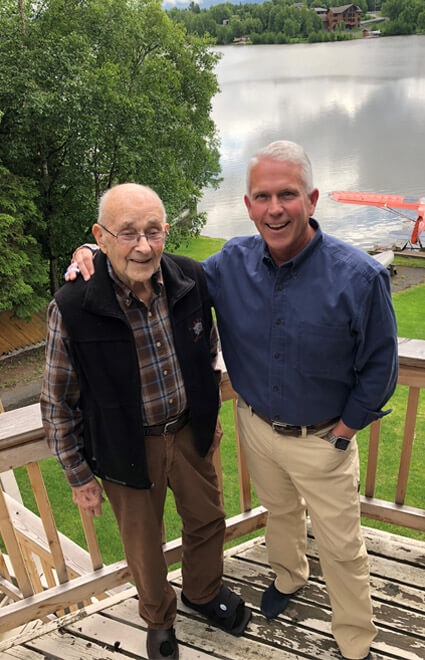 Rex and his stepson, Clint Johnson, at the family home in Anchorage. Photo by Bishopp Family Photo

Throughout his career, Rex focused on the welfare of his staff, and he actively promoted safety within the aviation industry. In addition to his company, Rex also helped to form several organizations that support the Alaska helicopter community.

In 1966, Rex was one of the founders of the Alaska Air Carriers Association, an organization that promotes safety while supporting and advocating for Alaska companies that carry cargo by air. He was instrumental in forming the Alaskan Aviation Safety Foundation in 1978. He served on the board of directors for 10 years, promoting aviation safety in a region with a tradition of “can-do-anything” bush pilots. He was also a trustee and founding member of the Alaska Aviation Heritage Museum. All three organizations are still operating today, supporting the missions and goals that Rex helped to establish.

Rex’s career was marked with many accolades. In 1987, he was honored with the Arlo Livingston Award by the Alaska Air Carriers Association in recognition of his leadership in aviation safety. In 2012, Rex was the recipient of the Alaska Aviation Legends Award in appreciation for his contributions to aviation in that state. In 2013, Rex was inducted into the Alaska Aviation Pioneer Hall of Fame.

How did Rex manage to achieve so much in the helicopter industry without ever having become a pilot himself? Simply, he knew his passion for supporting his employees and others could get him into trouble if he had a pilot’s license.

“Certain pilots and operators have historically said, ‘We can do it, we don’t need any help.’ Pilots think they can do just about anything,” Rex told the Anchorage Times in 1991.

He conceded that he might have acted similarly if he had held a license. “If I was a pilot myself and a ship had broken down out in the bush, I might be tempted to fly that part out there myself despite conditions. And that’s not the way you should do it.”

Not having a pilot’s license allowed Rex to manage his operations objectively and professionally. Besides, as he said in the 1991 interview, “I always figured I could hire better pilots than I am.”

Ruth agreed with Rex’s self-assessment. “Speaking from a wife’s standpoint, it was wonderful [not to have him fly]. We were the first ones to hear of any problem, and he would have been the first one to go out, and you shouldn’t do that when you’re upset.”

Rex was preceded in death by his beloved wife and partner, Ruth, in 1995. He is survived by his children, Laurie, Renee, Lynn, and Clint Johnson, as well as grandchildren and great-grandchildren.